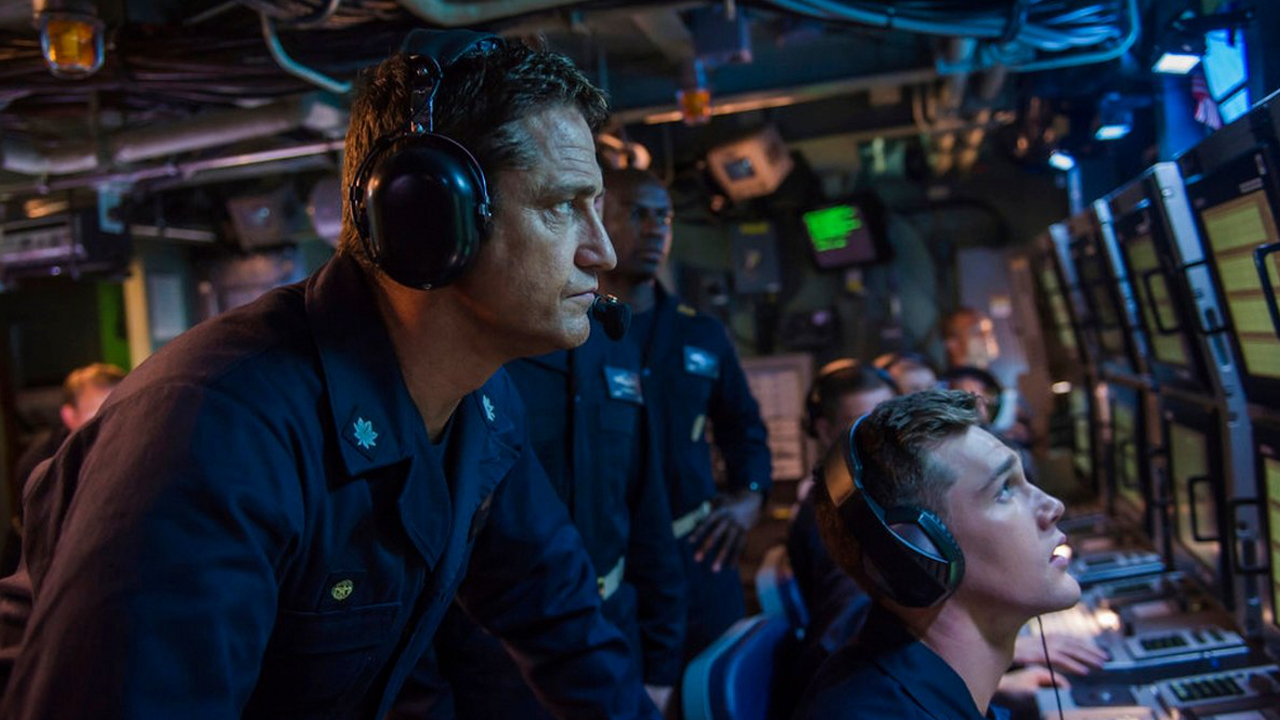 Butler’s ‘Hunter Killer’ Still Undecided Whether to Sink or Swim

Hunter Killer faces the unfortunate truth of being timely, yet dated concurrently. Like countless other films released in 2018, the international thriller is played off as a displaced attempt of heightened Tom Clancy-esque tensions between the United States and Russia. Despite the uneasiness nowadays between countries, there is more focus on a Cold War-lite vibe than a contemporary one.

Based off the 2012 novel, Firing Point by Don Keith and George Wallace, Hunter Killer interconnects multiple storylines involving an international coup and mayhem beneath Russian waters. Disaster befalls the USS Tampa Bay, a submarine tracking its Russian counterpart. That brings the USS Arkansas, led by the unorthodox Commander Glass (Gerard Butler) into action to investigate the wreckage. It’s a mystery whether or not the Americans or Russians initiated first.

On the surface, Navy SEALS, led by Lieutenant Beaman (Toby Stephens) witness the Russian President Zarakin (Alexander Diachenko) taken prisoner and overthrown by his Defence Minister Durov (Mikhail Gorevoy). The mission quickly escalates into rescuing Zarakin from the clutches of the Russian military heads. Rearing in a new direction, we’re actually supposed to sympathize with the deposed enemy here. Over at the Pentagon, Admiral Donnegan (Gary Oldman), Rear Admiral Fisk (Common) and NSA analyst Norquist (Linda Cardellini) strategize a solution on both fronts.

Hunter Killer exerts most of its tension Butler and company. The crew of the Arkansas might not be fully comfortable with Glass’ tactics, but Butler’s commanding performance is to be respected. While not the over-the-top 300 “This is Sparta”  meme, Butler brings a fun presence to the leading role. Shockingly it’s more authoritative than shouting for the sake of shouting. The situation aboard the Arkansas grow uneasy once Russian Captain Andropov (Michael Nyquist) is brought onboard after a rescue mission. It’s a bit jarring, albeit welcoming seeing the late Nyquist not as the bad guy. After villainous roles in Abduction, Mission: Impossible – Ghost Protocol and John Wick, it’s almost instinct to expect a double cross from Andropov.

SEE ALSO: Geostorm in 4DX Review: Roughhousing in the Aisles

There’s little working with either the SEAL subplot or the militarized strategy at home with Oldman and Common. Time ticks away as we cross-cut between the three storylines, but there’s a lack sense of urgency with World War III on the horizon. When the majority of the film is simply going through the motions, one can only hope to return to the one thread that continues to propel the narrative along. That being the case, the circumstances aboard the USS Arkansas aren’t enough to carry the entire weight of the film. Even against a few Clancy adaptations in their prime, the overall generic execution would sink a bit lower.

If the waterlogged script by Arne Schmidt and Jamie Moss wasn’t so focused on being so by-the-numbers and nagged by a one-dimensional villain, there would probably be more fun to be had with Hunter Killer. Fortunately for Hunter Killer, the camerawork is coherent for the most part, minus some shaky cam during the climax inside the USS Arkansas. Restraint on overblown spectacle and scope is more on point here, though it may be more budgeting issues. CGI can be a mixed bag, pinballing the audience between a moment of shoddy green screen and a following scene of immersive visuals. Interior sets within the USS Arkansas would probably be the most genuine.

Hunter Killer is simply there, neither sinking to the depths of the ocean nor vigorously swimming to success. Outside of acceptable performances by Butler, Oldman and Nyquist, there is only a worthwhile blip on the radar every once in while.