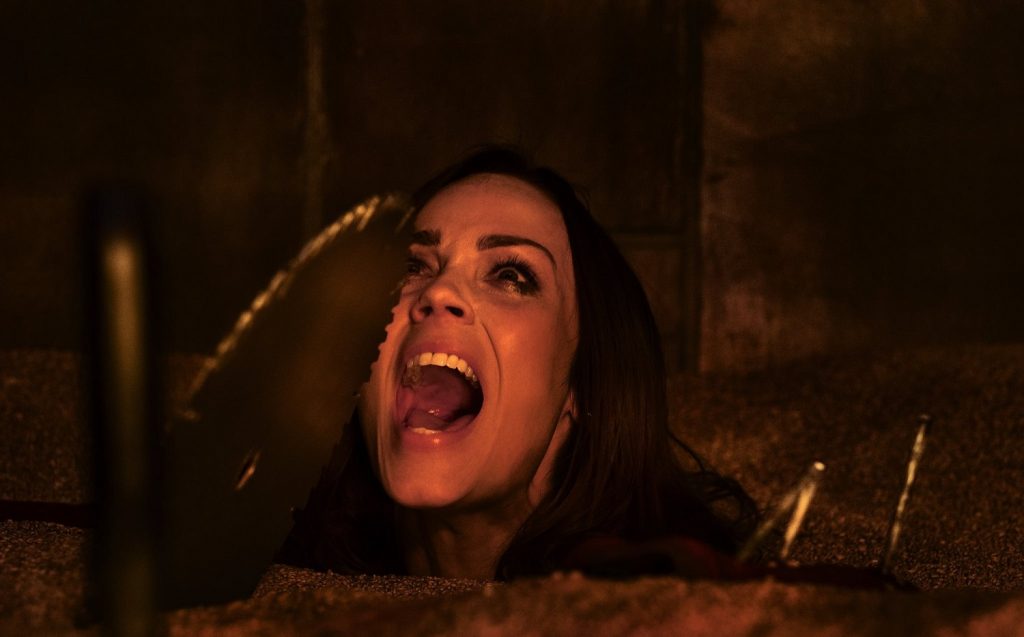 After several Octobers featuring no ads proclaiming, “If it’s Halloween, it’s Saw,” the franchise has come back to thrill, perplex and disgust audiences everywhere. Jigsaw is the eighth entry in the once popular horror franchise, and it sadly does little to churn up excitement for a ninth. The film does manage to work better than the incredibly dull and supposed final chapter, Saw 3D, but the film adds little beyond a rehash of the things that work and many of the things that don’t work when it comes to this series. All that said, while hard to determine if the hardcore fans will appreciate the attempt, Jigsaw at least provides a version of what many are expecting.

I’ll be upfront and say this review of Jigsaw is coming from me fresh off a late night IMAX screening with a not very crowded audience. As a result, it humors me to think how long this review will end up being, given my relationship with the Saw franchise.

That in mind, since the genre fans tend to need qualifiers, it should be made clear that the Saw franchise has never been one I much cared for. Not for any moral reason or something like that, there’s just something about the convoluted continuity that always comes off as too clever for its own good. There are some notable highs (Saw III and Saw VI), which is due to upping the game in the acting department (yes that matters), and the traps are usually impressive in a ludicrous sort of way. However, as these films were being churned out year after year, it almost always felt like opportunities being squandered based on some rushed choices.

So now we’re back in the world of Jigsaw and I can’t help but point out the issues I once again found. However, given where things left off in the previous film and the eventual reveal in this one, I wouldn’t find it surprising to see the fans in total disagreement over how low this entry ranks. To its credit, the film works in a reasonably standalone manner (it still helps to be at least aware of who the Jigsaw Killer was). That said, I’m pretty sure the fans would be much more satisfied by having the film bend over backward to tie it into the multiple films by way of loose character connections, tangential timelines and other elements that would hold it true to the series. Or maybe not. 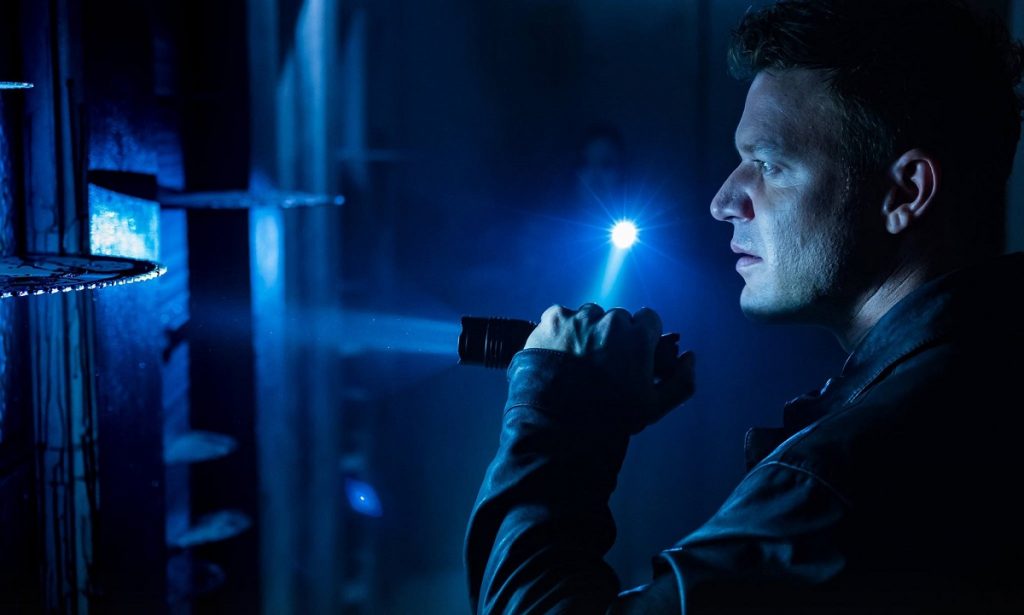 Honestly, it’s impressive to see a horror franchise go on this long without starting over. Sure, Jigsaw died way back in Saw III, but the franchise has continued along, keeping things complicated along the way. Perhaps it was a smart choice to move things forward yet again, as opposed to remaking Saw for a new generation. However, it’s frustrating to have writers Josh Stolberg and Peter Goldfinger do so little to make this franchise feel relevant in some way. Not every entry needs to go for biting social commentary like Saw VI, but if the choice has been made by Lionsgate to revamp this franchise for at least one more go around, I would have hoped it would have something to offer that felt at least not entirely like a scheme based on box office potential.

Credit does go to the design of the traps themselves. While some elements get a little too digital for my liking, the ridiculous amount of intricacy in designing over-the-top death traps is undoubtedly a staple of the series that anyone who has seen all of these films must enjoy to at least some degree. The Spierig Brothers, directors of Daybreakers and the fantastic Predestination, may have some significant problems in how claustrophobic the police procedural plotline feels, but there is fun to be had with subjects involved in the main game.

The actual plot is somewhat familiar. A criminal sets things in motion, along with the discovery of a mysterious recording of Jigsaw’s voice alerting the police to a game that has trapped numerous people. While the police and coroners investigate, we can see a group of strangers all trapped in a farmhouse, dealing with elaborate death traps with solutions that range from “ouch” to “that’s gonna leave more than just a mark.”

From a storytelling standpoint, it was hard not to see how limited this production felt. The traps are one thing, as they should be contained, but watching the police zero in on suspects that are merely the only other characters they’ve been interacting with just feels so lazy. Not helping is the flat direction and this group of people as a whole. With a team of actors all failing to give memorable performances to enhance their flat characters, I could do little more than roll my eyes at their behavior, regardless of considering my reaction in these tense scenarios. 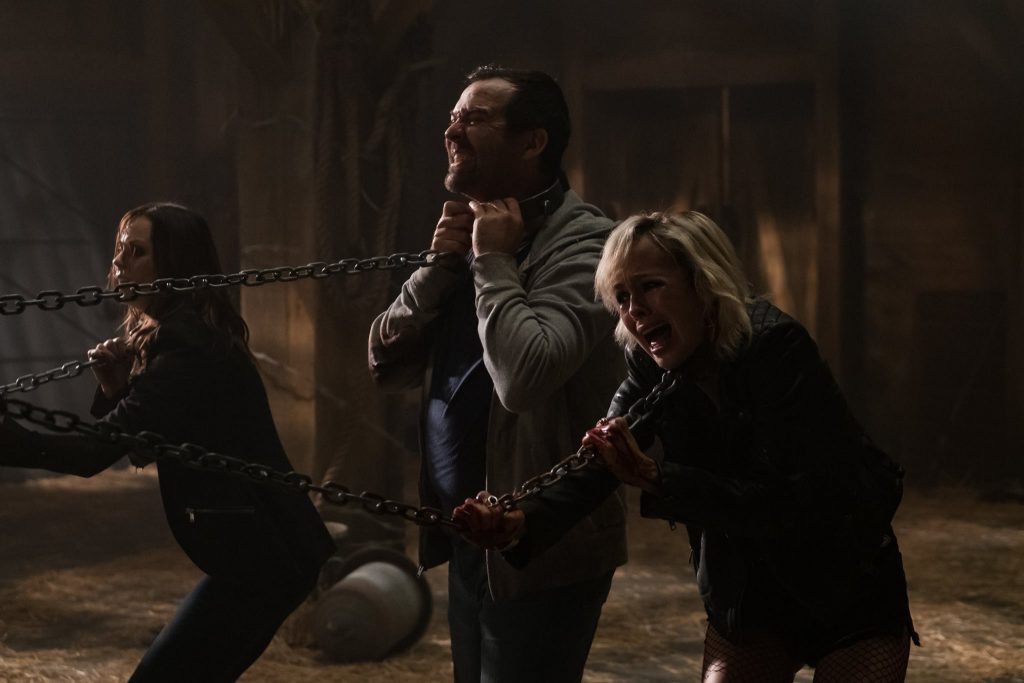 Even as a violent horror film, Jigsaw seems to shy away from delivering bigger on its most grotesque moments. Keep in mind the first Saw was not all that gory either, but this is the eighth entry and the series has shown us some gnarly stuff in the past. A fascinating aspect of this series is considering how one doesn’t want harm to come to people but is still excited by the potential of such deadly results. Jigsaw somehow finds a way to miss out working into that lane effectively, give or take a couple of traps and a grisly autopsy that fazes no one in the room.

The only thing left is the mystery aspect, but it also fails to satisfy. Eventual reveals feel like monotone lectures requiring patience while certain characters detail all the things you just saw with added context. Even as Charlie Clouser’s familiar score plays, there’s only so much fun to have when the “twists” are not so much surprising as they are exhausting. Again, the desire to come off as clever has been an issue I’ve continually had with this series and Jigsaw isn’t doing anything to change that.

As a Saw film, getting the chance to see new traps on the big screen may be enough to satisfy those who have wanted to carry on Jigsaw’s legacy. I didn’t have to see this film, so I suppose the fact that I did is enough to say the intrigue I had equaled a minor recommendation. However, when the number of installments gets this high, I can appreciate finding fresh ways to take on a franchise rather than taking an easy way out, which is what this film seemed bent on doing. So with that in mind, Jigsaw was not the key to salvation, it’s just another dead end in a wacky maze.