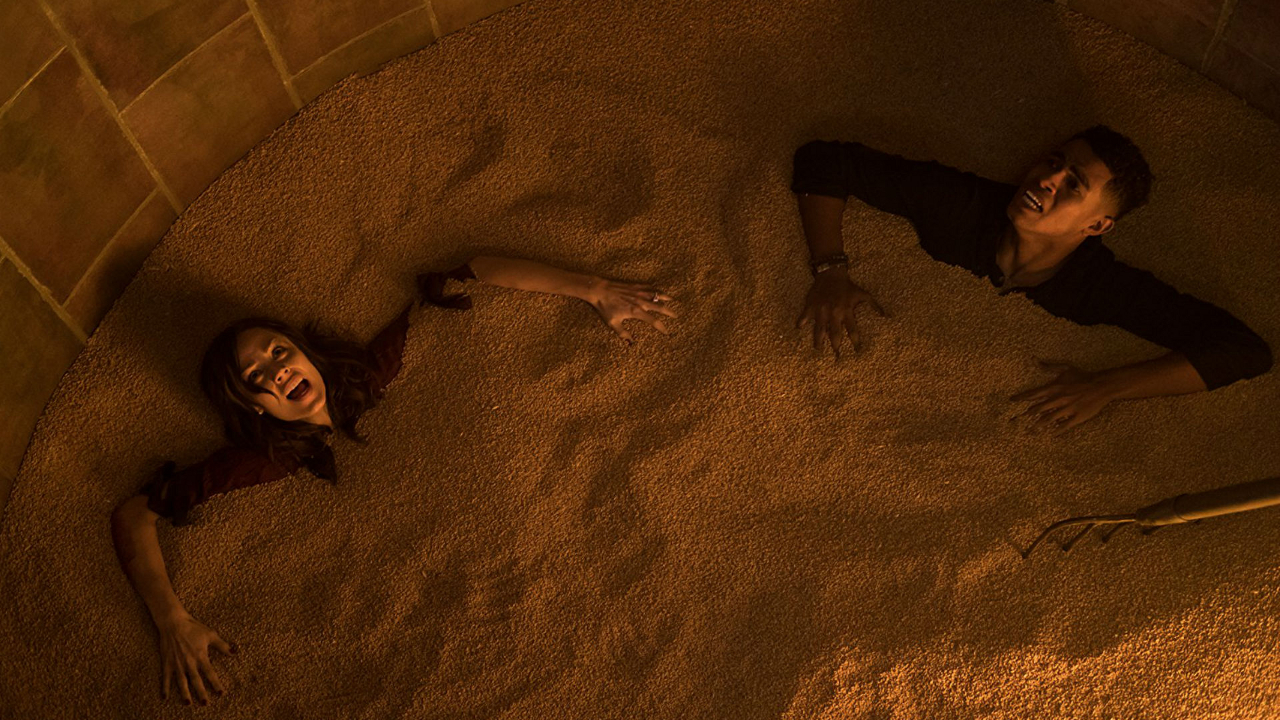 Never, ever trust a horror sequel tagged with the phrase “The Final Chapter.” The climax of Saw 3D (later retconned as Saw: The Final Chapter on home video) “promised” to hide no more secrets. Make no mistake, Saw 3D concluded the franchise on a lackluster note, albeit satisfying enough with its full-circle revelations. It’s been seven years since we heard our last “Game Over.” But with this eighth installment, Jigsaw, this is a game that has no ending in sight.

A decade has past since the Jigsaw Killer met his end in Saw III. Somehow, after having his throat slashed, the mutilated remains autopsied and ultimately buried in the ground, John Kramer (Tobin Bell) in the flesh has orchestrated a brand new game. Don’t even ask how. Like the previous seven installments, Jigsaw follows the formula we’ve come to expect. We have our typical police procedural as Detective Halloran (Callum Keith Rennie) attempts to piece together the impossible puzzle. Meanwhile, the latest diabolical game unfolds at an abandoned farmhouse.

At this point in the Saw franchise, there’s no reason to get attached to any of the victims. Jigsaw’s town has been littered with druggies, crooked cops and murderers. I swear this must be the most tight-knit screwed up town in all of America. And our beloved serial killer seems to have ties with practically all of them. Jigsaw is no different. The five in the farmhouse game all have reasons for being there. It’s no shocker that we’re more interested in the annual Halloween bloodshed to fuel the torture porn fixation. A certain unnamed horror film from a few years ago was on the money about that one.

With the Spierig Brothers at the helm, Jigsaw is somewhat trying to carve out its own identity. For once, the director’s chair isn’t cycling through the franchise’s editors, production designer and screenwriters. It’s a fresh set of eyes and ones who brought us Daybreakers and Predestination. This sort of new blood is ambitious, but never takes that much-need leap to offering an original spin to the franchise. While the film scales back the gore and shock value, there are a few new aesthetic changes. Jigsaw oddly feels much more crisp and cleaner, crawling out the grimy bathrooms and meat packing plants. Also gone are the signature seizure-inducing edits during the traps.

Regardless of these minor changes, you shouldn’t ignore the fact that Jigsaw is ultimately “Saw’s Greatest Hits.” In production, the original title for Jigsaw was Saw: Legacy. If there is any sort of legacy with the Saw sequels, it’s that they haven’t taken any bold risks since the original three films. This is no different. Screenwriters Josh Stolberg (Piranha 3D) and Peter Goldfinger simply put Saw II, Saw III and Saw V primarily in a blender and labeled it Jigsaw. Instead of there being any sort of closure for the franchise, the floodgates are wide open for at least two more sequels. I’m not sure how much longer we can keep playing this game.

This late in the game, Jigsaw is strictly for die-hards of the franchise. Frankly, we didn’t need an eighth film, but once Charlie Clouser’s iconic score hits, this sequel sucks its faithful back into a fun little house of horrors. Once the credits roll, we’re left with a laundry list of new questions and old ones yet to be answered. But don’t worry, Saw IX or Jigsaw II (or whatever it’ll be called) will begin yet another game.