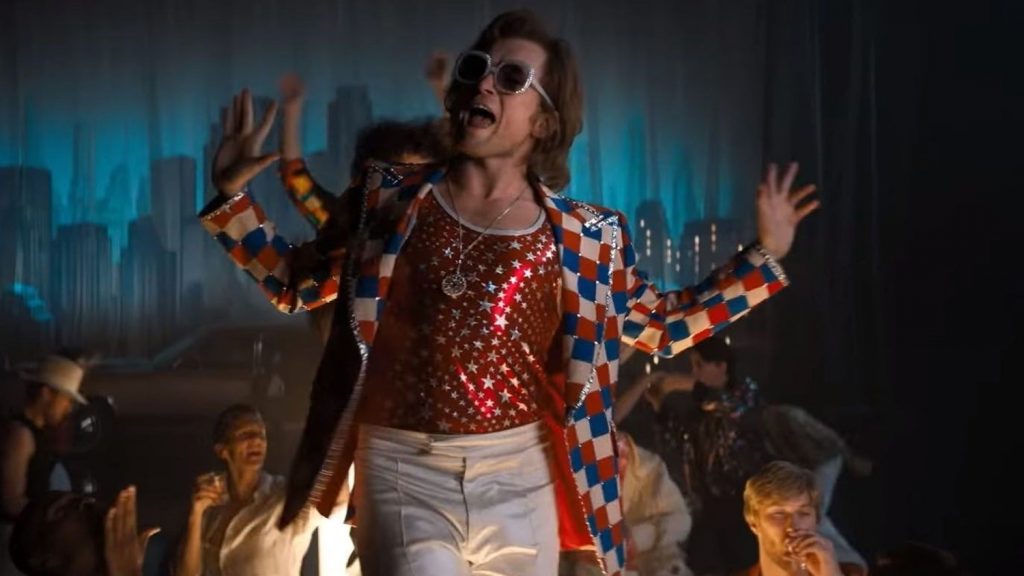 At its core, there’s not much to separate Rocketman from other music biopics attempting to force the life of a person or a band into a specific movie model. This look at the life of Elton John features all the major touchstones of the genre including a sudden rise to fame, as well as substance abuse, acceptance of sexual orientation, daddy issues, and depression. And yet, the film still manages to be a rousing success. While the chronological progression still holds Rocketman on a familiar narrative path, the film’s ambition concerning the incorporation of fantastical musical sequences makes it a memorable and engaging watch.

The film tracks Elton’s life from the early 60s to the mid-80s. We are able to witness the origin story of Reginald Dwight (Taron Egerton), as he learns to play piano, meets his songwriting partner Bernie Taupin (Jamie Bell), changes his name, eventually teams up with music manager/former love John Reid (Richard Madden), and hits all the other bases that allowed him to go wild with performances and costumes. There are also the personal connections with his friends, as well as his family that includes Elton’s mother (Bryce Dallas Howard) and grandmother (Gemma Jones), who raised the man on their own in the absence of his father.

Getting over the hill of adding something of value to such an irritatingly familiar genre, no matter the artist and type of music, comes from the choices made by director Dexter Fletcher and writer Lee Hall. Rocketman does function as a musical, but it’s cleverly staged as one that teaches you how to watch it as it goes along. While there are early musical numbers that allow the characters to sing in the moment, breaking from the traditional flow of the scene, these moments increase in frequency as the film goes on, adding more fantastical elements along the way. 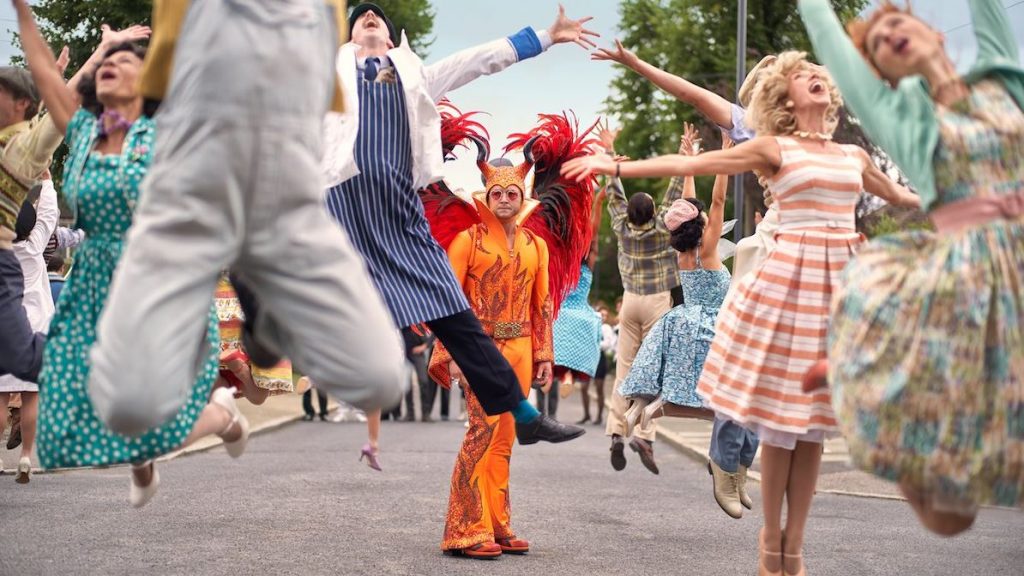 This provides the film variety and also lets the music apply to the narrative. That’s a far cry better than the jukebox musical version of a biopic, where the inserted songs feel like an excuse to take a break from the story entirely. Even with the film’s framing device, which finds Elton describing his experiences in an Alcoholics Anonymous meeting, there’s a design here that chooses the push the viewer towards understanding the music and be inside Elton’s mind to an extent. It’s perhaps not as cerebral as some of the more challenging music biopics out there, but for a major studio film to try something this ambitious is undoubtedly admirable.

There’s also plenty to say about the lead performance. Major mainstream Hollywood productions don’t tend to have to worry about there being an issue with who is portraying the subject of the story, as the film frankly wouldn’t get made if that was a concern. Rocketman does not have anything to worry about, as Egerton is terrific here. While Egerton has already had a chance to shine in The Kingsman films and the delightfully low-key Eddie the Eagle (also directed by Fletcher), he takes on the challenge to look, act, sing, and dance like the legendary musician and delivers a bravura performance.

No, the two are not the spitting image of each other (rarely the case in any of these films when making a side-by-side comparison), and even the singing stands out as a take on Elton John, as opposed to an exact vocal recreation. That’s not what matters. The importance is just how well Egerton captures a man who is balancing talent, introverted qualities, personal drama, and wild flamboyance to such a high degree. Because the film’s perspective is so directly focused on Elton’s mind, we can watch Egerton embody a version of the man that speaks to how he’s working through so many things. That Egerton actually sings and performs these moments so effectively only adds to the level of genuine passion the filmmaking team had in wanting to do right by their subject. 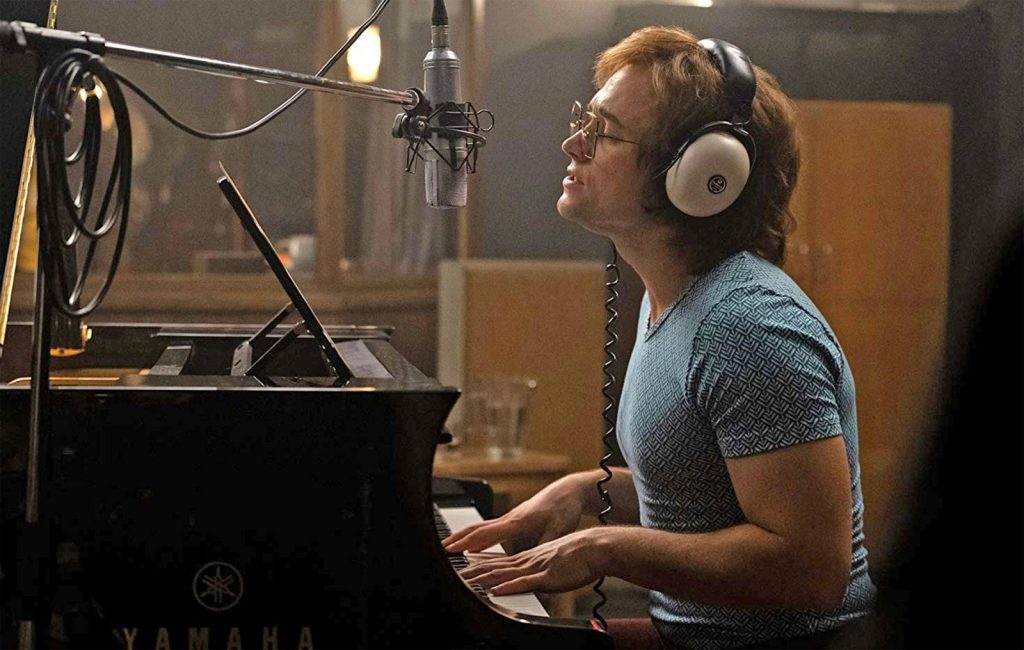 There’s also a frankness to the film that I rather enjoyed. Rocketman is a colorful, raucous experience fit for a big crowd looking to have fun, but it doesn’t shy away from being a movie made for adults. People swear and do drugs, Elton coming to understand his sexuality isn’t an element that’s played down or used as a gimmick. The film is far from a hard-R-rated feature, but it respects its audience enough to not shave off the edges in portraying the life of a man whose expressive public persona was matched by some rough times behind the scenes.

From a production standpoint, I really can’t say enough to praise the design choices here. There are plenty of costumes to see, reflecting Elton John’s stage persona, as well as the changing times, and the contrast between him and the rest of the world. Only helping things further are the choices made to emphasize the fantastical nature of it all. 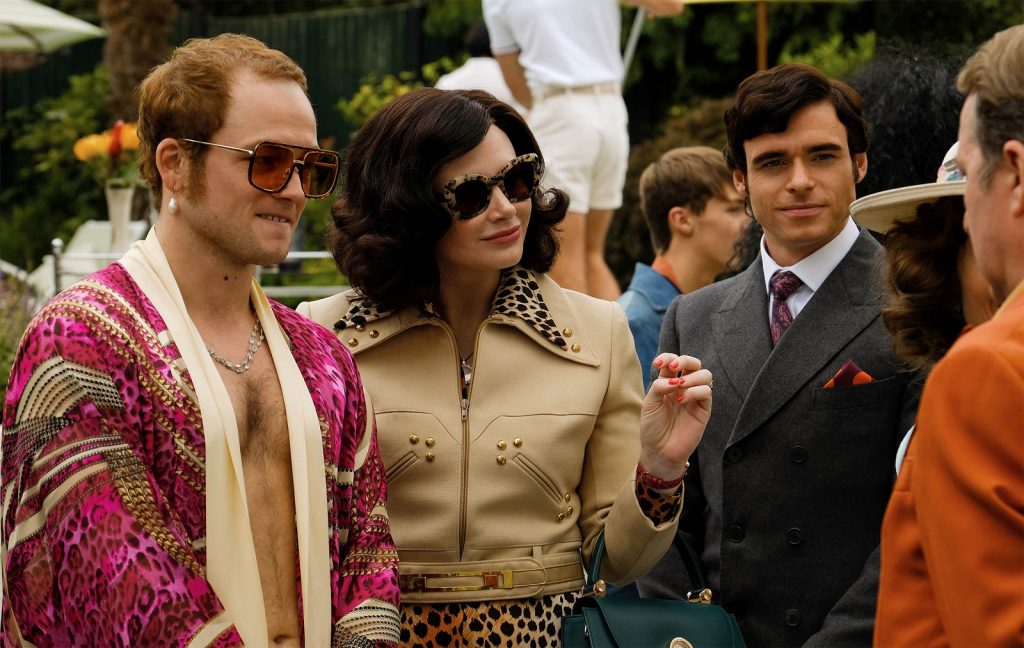 While the story is grounded enough, making a deliberate perspective choice lets the film remain stylized for its duration, so characters can suddenly switch from a dinner setting into a choreographed musical number. Even early on, Fletcher and cinematographer George Richmond get crafty in a lengthy sequence providing the appearance of a single shot, while Elton ages from a child to a young adult version of himself, while keeping all the period details in mind, in addition to the choreographed dance numbers taking place. It’s these sorts of choices that allows Rocketman to hold onto its strengths, even if we’re still watching an artist trapped inside a standard feature narrative structure.

Rocketman does the job in balancing exuberant fun with sincerity. As a film with plenty of ideas in mind for how to delve into the life of Elton John, I am happy to see it try to engage with inventiveness. It’s a nice change in pace when it comes to these rock biopics, as the less I have to think about Walk Hard’s fantastic deconstruction of it, the better. For all the trappings of the genre that Rocketman doesn’t avoid, it still finds ways to serve as a winning piece of cinema with a terrific lead performance from Taron Egerton. That’s enough for audiences to be on board with all this crocodile rock taking place. 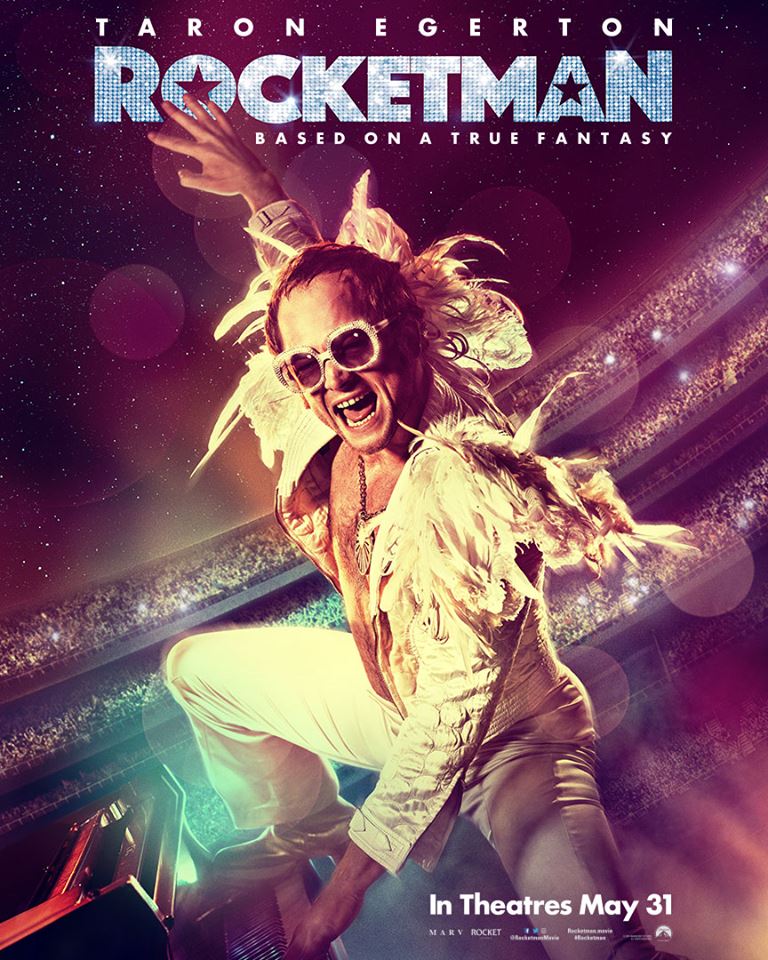 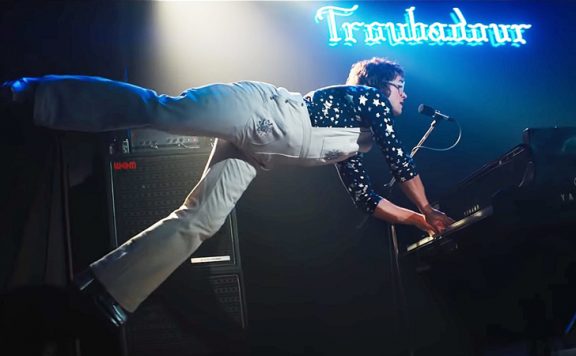 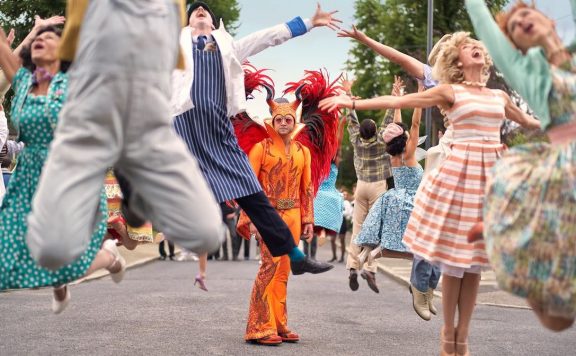