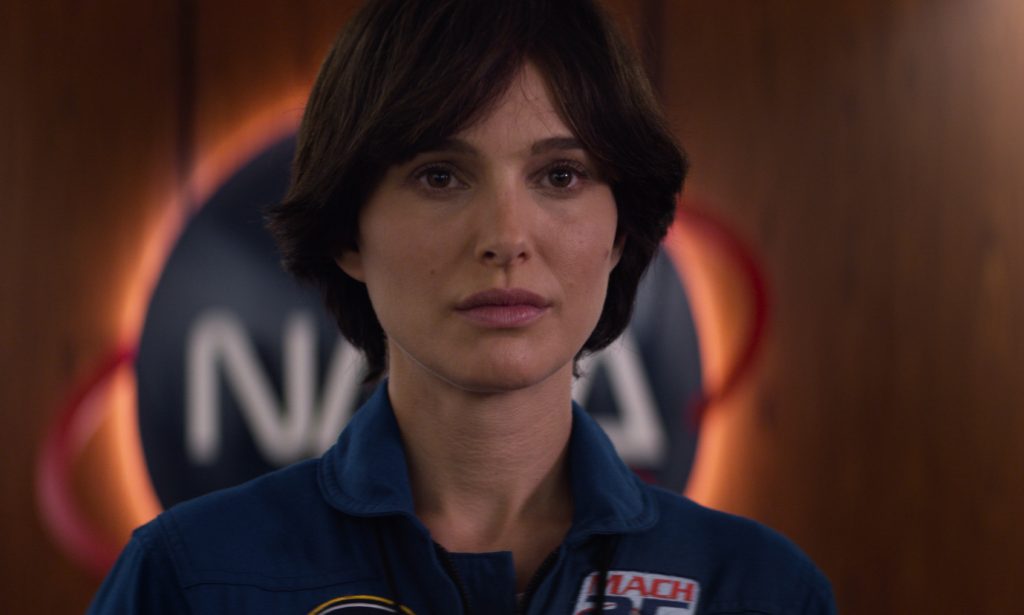 I feel like co-writer/director Noah Hawley attempted to fool me with his ambition. Lucy in the Sky is most certainly a film with an identity all its own, but that identity fails to ever become clear. For all the aspect ratio changes, ruminations concerning what going to space can do to a person, and solid performances from a strong cast, the film is still plagued by problems regarding the story, the eventual shifts it makes, and what it wants to say about the real events the film is loosely based on. The film seems to be calling to audiences, but the answers come through quite slowly, and without much to satisfy.

Natalie Portman stars as Lucy Cola, an astronaut who has just returned to Earth, following a space mission that had her awe-struck with the feeling of being above the entire world. Wanting to repeat this experience, she goes back into the program to be scheduled for another mission. This requires training with other astronauts including veteran Mark Goodwin (Jon Hamm), and rookie Erin Eccles (Zazie Beetz).

Conceptually, the film wants to show us how Lucy is losing touch with reality. Thanks to the always sliding aspect ratio, the film is seemingly providing an understanding of how things are going, whether an audience is seeing scenes in full widescreen, constrained into an Academy ratio, or watching from a birds-eye view. The problem is not necessarily an inconsistency (though these tricks seem to go away during a third act that would require it the most), but a lack of a better effort on Hawley’s part to have adequately constructed a means for the audience to understand the choices. 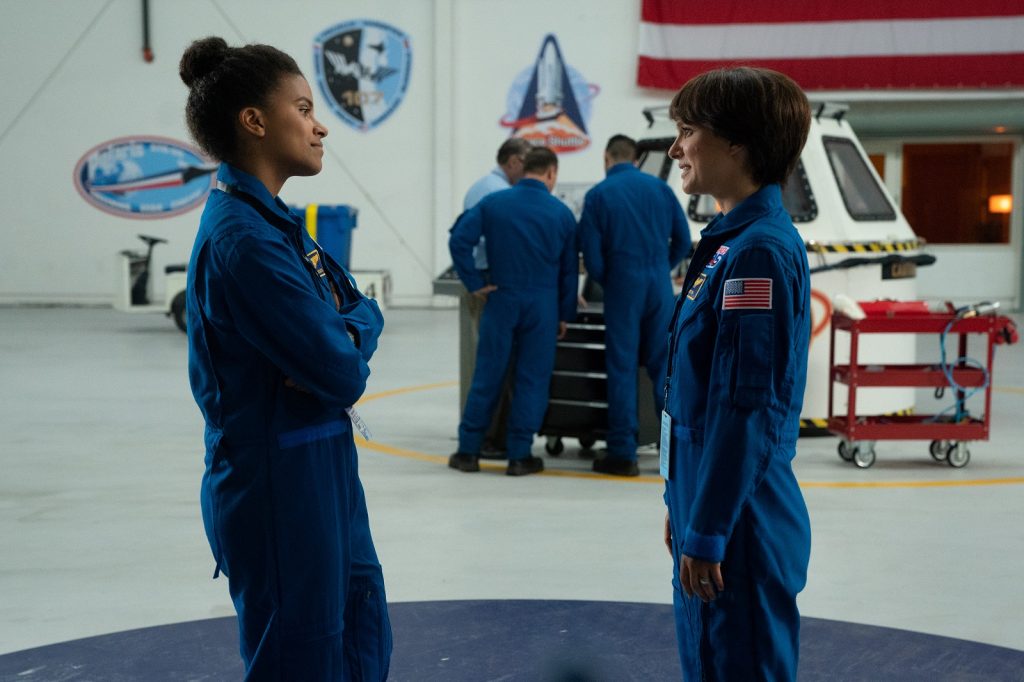 The other issue is how the story unfolds. Losing grip on reality is something I can buy into, as the film is based on a real individual, and having this new understanding is something many astronauts have had to deal with. Unfortunately, Lucy in the Sky plays up elements suited more for a melodrama that happens to involve astronauts, and the mental state of Lucy never seems to properly gel as far as the focus on both her thoughts regarding being in space and the nature of her romantic entanglements.

Dan Stevens plays Lucy’s well-meaning husband, Drew, but she falls for Hamm’s Mark. The two begin an affair, and Lucy eventually realizes she’s not the only one for him. Even while being a smart individual who received a proper warning from various others, including her mother (Ellen Burstyn), Lucy chose a path resulting in eventual destruction.

There are elements of this story I don’t want to delve into (while some of these events actually transpired, I was not in the know of the details beforehand), but I will say the film escalates in a way that should have more going on from a filmmaking standpoint. For all the style that fits into the first half of the film, a significant event involving a road trip and a confrontation should feel like more than a schlocky Lifetime Channel drama. The third act has elements that could do a fine job of supporting Lucy’s loss of grip on reality and how that relates to her personal life choices, but it comes off more like a cliched jilted ex-lover story. 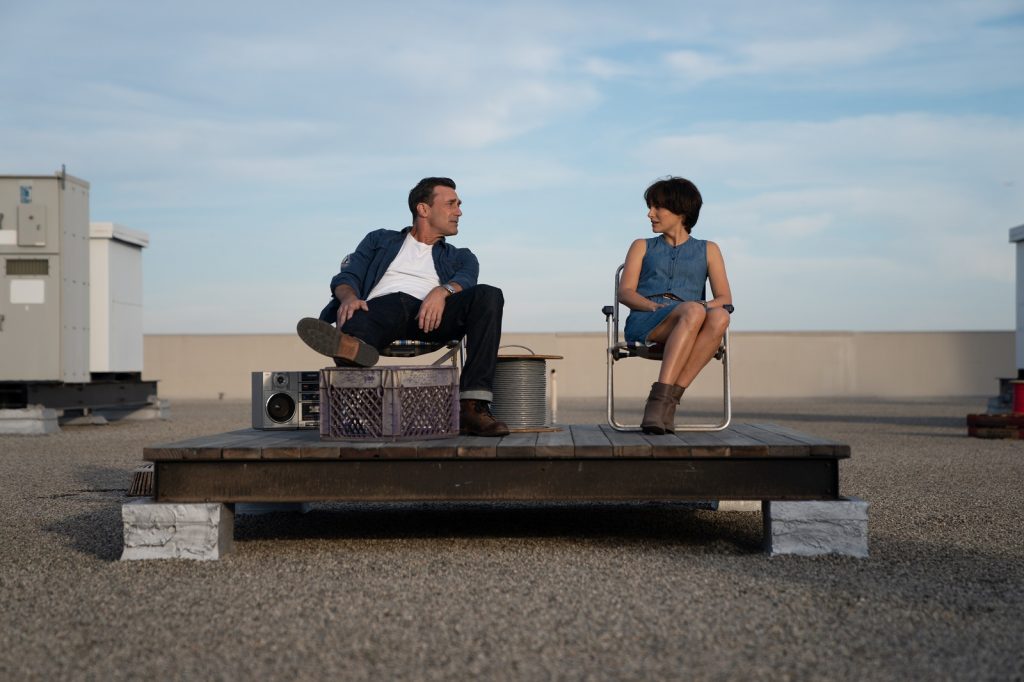 This is all the more baffling because of Portman’s presence in the film. As an actress who tends to make smart choices regarding the types of characters she portrays, Lucy does not seem like one of her finest hours, regardless of how unique the character may seem. Rather than deliver a fully-sketched out persona, the film provides a character confident enough to be prepared to leave Earth’s atmosphere, but weak enough to crumble under the might of a skeezy Jon Hamm.

It’s not that any of the performances are bad; however, it’s more about how the writing fails to support them. Portman puts in the work, though it only amounts to so much. Hamm is actually quite good here, playing into the different shades he generally plays well as far as what’s on the outside, versus what lurks beneath. Stevens and Beetz are less-defined, but still show the proper amount of concern when needed. Burstyn seems to be having the most fun as the old mother with plenty of one-liners. Newcomer Pearl Amanda Dickson also has some moments to shine as the teenage niece seemingly caught in the middle of Lucy and her husband, while staying with them.

Having been based on the true story regarding astronaut Lisa Nowak and William Oefelein, the biggest question I had in this jumbled, strange film was why it needed to be made. Again, the concept is actually quite good, as far as watching an astronaut struggle with returning to earth. However, this film never provides an adequate reason for drudging up a story that must be more embarrassing than anything else for all of the parties involved.

Perhaps co-writers Brian C. Brown and Elliot DiGuiseppie (who developed the story together) had clearer intentions from the start before Hawley revised the screenplay. As it stands, Lucy in the Sky is a confusing mess of a feature, with an early emphasis on style over much else, and a collapse into trite thriller territory. I would have rather been taken incredibly high with something more worthwhile, rather than drifting through whatever this was supposed to be. 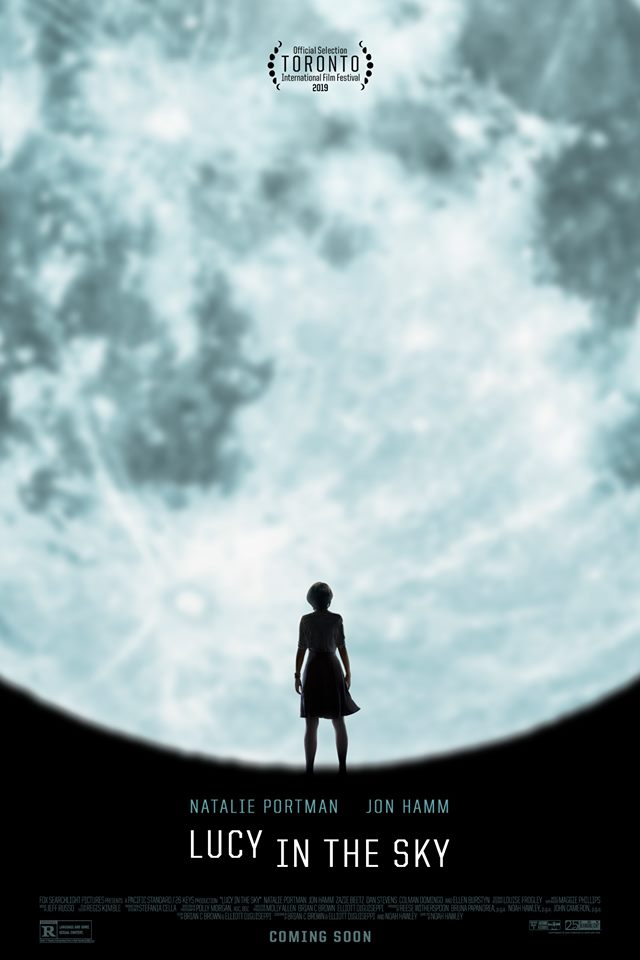