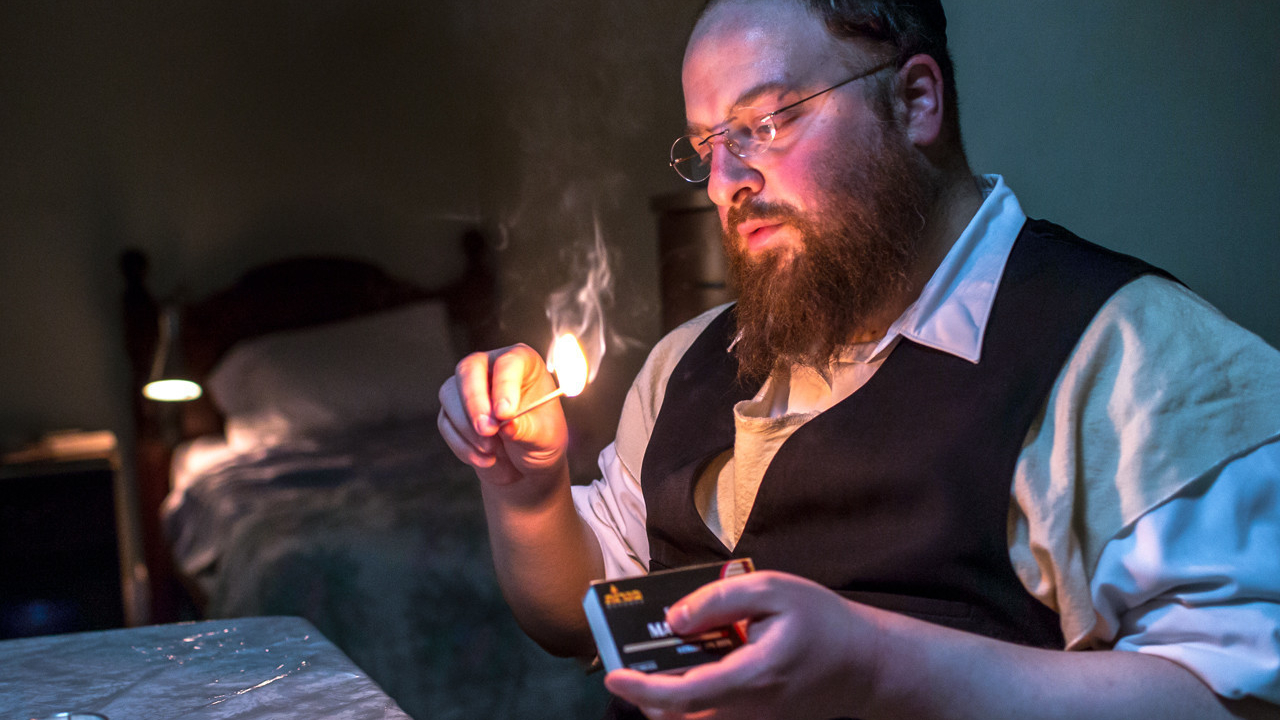 If you’ve ever felt like you’ve screwed up royally or suffered from a string of bad luck, Joshua Z. Weinstein’s Menashe vocalizes that you’re not alone. With a lesser-known Hasidic community in Brooklyn as our backdrop, its quiet nature offers up an intimate journey of the culture and its titular character.

The life of Menashe (Menashe Lustig) is immediately met with turmoil. His wife has recently passed away, leaving him to solely care for his 10-year son, Rieven (Ruben Niborski). While Menashe is stubbornly confident in raising young Rieven by himself, that’s a big no-no in Hasidic culture. In fact, it’s the polar opposite of what the Talmud teaches and his rabbi, The Ruv (Meyer Schwartz) preaches. Butting heads with the conservative teachings, Menashe wants to prove to his family and friends that “a good wife and a good home” aren’t rigid requirements.

Besides battling for the custody of his son, Menashe struggles with everyday routine. The workday at a local grocery store has its own fair share of problems. Like his family situation, he constantly messes up. It’s basically a combination of clumsiness and bad luck. He’s even referred to as a schlimazel (unlucky). Consequently, his entire life begins to snowball. His brother, Eizik (Yoel Weisshaus) remains a thorn in his side. While a model Hasidic Jew, Eizik’s encroachments on his brother’s personal life seem rather bullish without compromise. At one point in the film, he suggests to be Rieven’s temporary guardian until the situation improves. Even forcing himself as matchmaker proves to be a failure as his brother insists on being a single parent.

Director Weinstein has no qualms examining Menashe through an everyday approach. The realism is quite astounding as for many scenes, it feels more like a documentary of a real character. The film is primarily in Yiddish with subtitles. Lustig’s titular character is grounded in the actor’s own personal life, albeit not as stricken by bad luck. Lustig has no other film credits to his name, yet there is this rare authenticity that goes hand-in-hand with this performance. Drawing from personal experience greatly helps with intimate roles such as this. The unlucky side is perhaps thematically enhanced to drive the narrative, but there’s never one scene where the tension feels phoned in. Lustig’s character is a multi-dimensional driving force behind this film who can genuinely empathize with.

That being said, the realism carries over throughout the course of the film. The claustrophobic cinematography by Yoni Brook and Joshua Z. Weinstein contributes to the film’s intimate tone. Many scenes in Menashe’s apartment are tight for space, but convey the living situations he is dealing with. We realize it’s the not the most ideal of circumstances and may not conform to his religious standards, but he’s not giving up despite being dealt a bad hand. To that, we have to give him ample credit.

For those not fully aware of Hasidic Judaism, Weinstein conveys the film as a vivid eye-opener into the culture, both personally and as a whole. If you’re intrigued by the existence of a small tight-knit community deep in Brooklyn, this is gateway for your curiosity. Weinstein doesn’t lay every detail on table, but there is ample information to understand the basics of tradition and customs. While Menashe offers plenty of empathy, there’s a fair share of detachment as well. But that’s to be expected.

Menashe isn’t the joyous, uplifting narrative we’ve seen from many other entries out of the 2017 Sundance Film Festival. Instead, we’re treated to a striking slice of life narrative for Weinstein’s feature-length debut.