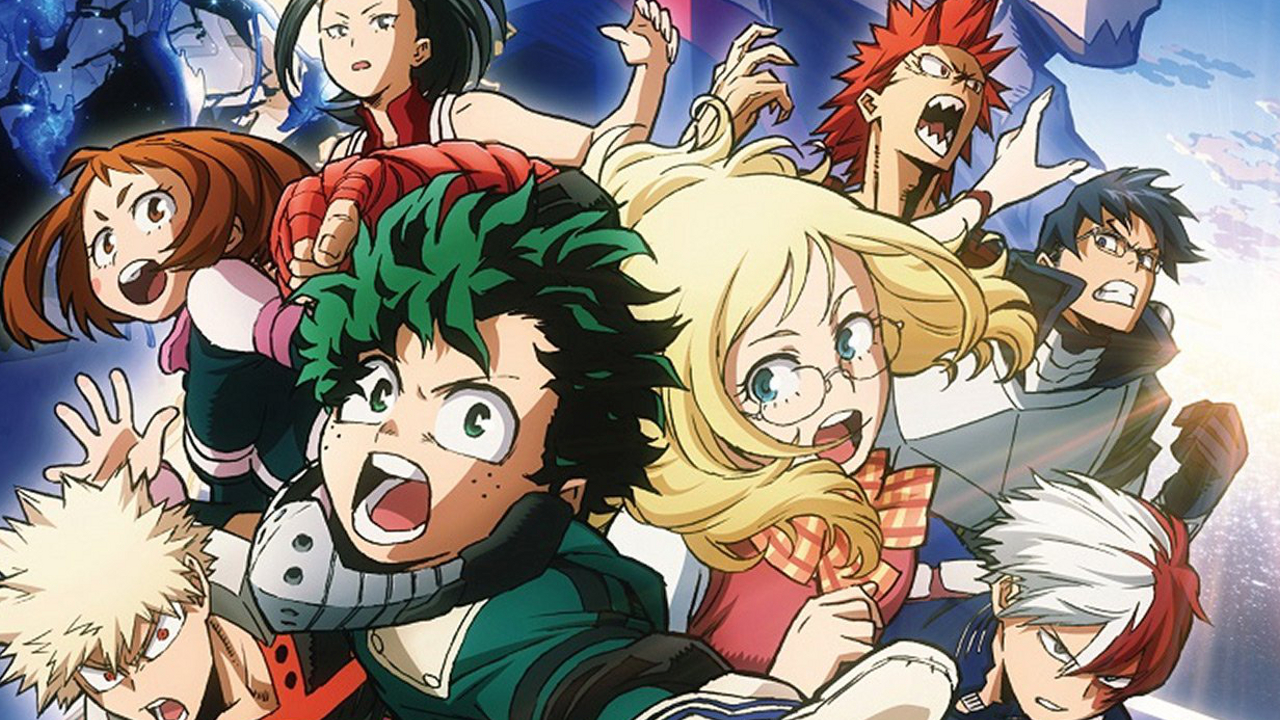 ‘My Hero Academia’ Arrives on Big Screen in Superheroic Fashion

Since its inception in 2016, the following for My Hero Academia has spread like wildfire over the past three seasons. Even with superhero fatigue constantly being debated about as of late, My Hero Academia perseveres as a fun, fresh spin on the saturated genre. 62 episodes in, it’s fairly evident why anime fans have quickly taken to Deku (voiced by Daiki Yamashita) and his superhero classmates in training at U.A. High School. It was only a matter of time before a My Hero Academia movie would surface on the big screen.

Despite just wrapping up an eventful third season, My Hero Academia: Two Heroes backpedals somewhere in between seasons 2 and 3. After an extended sports festival arc and an inevitable villain showdown, the U.A. students are finally ready to enjoy their summer vacations. Though being in the world of My Hero Academia, we shouldn’t expect an uneventful couple of months just because our heroes are away from school.

Deku is invited by his ever-smiling mentor, All Might (voiced by Kenta Miyake) to the I-Expo, hosted by a superhero research facility. The legendary Symbol of Peace reunites with his long-time scientist friend, David Shield (voiced by Katsuhisa Namase). Deku, however, begins to bond with Shield’s brainy daughter, Melissa (voiced by Mirai Shida). Like Deku, Melissa was born Quirkless (lacking superpowers). Deku’s classmates, Bakugo, Todoroki, Iida, Uraraka and Mineta also arrive on the island, invited to the I-Expo in one fashion or another. It’s not fun and games for long as the guests on the island (including the powerful All Might) are held hostage by the masked Wolfram (voiced by Rikiya Koyama).

My Hero Academia: Two Heroes is undoubtedly a welcoming side story for fans who have invested countless hours into the anime. Though for the freshly initiated to the series, director Kenji Nagasaki presents a coherent launching pad, condensing Deku’s journey from powerless underdog to All Might’s superhuman protege. Like the show, much of that storytelling is handled through flashbacks we’ve seen time and time again throughout the anime. Though, Little Deku’s desire to be a hero like All Might, despite his Quirkless tendencies, still draws out the same emotional punch it did at the start of the series.

The only drawback to Two Heroes is falling into a trap of self-contained storytelling without any consequence of propelling the overall anime. It boils down to being an optional puzzle piece to a much-bigger world. Unfortunately, that’s commonplace with animes shifting their focus on the occasional theatrical event film. Despite being an important figure in All Might’s past, Shield and his daughter are solely introduced just for this film. The same can be said about the villain Wolfram, whose true motives surface rather late in the film. Perhaps more light will be shed on these characters later in the series.

Where My Hero Academia: Two Heroes delivers is in its glorious spectacle. It might not be until the second half until the U.A. heroes truly show off their spectacular skills, but it’s well worth the anticipation of these intense set pieces. When the music begins to pump, you know something epic is about to go down. It’s a cinematic Detroit Smash! All Might and Deku might be at the titular forefront of this film, but everyone has a chance to shine. From plenty of signature Bakugo rage moments to Todoroki’s ice walls and even little perverted Mineta’s heroic motivations, there’s a striking sense of heroism, friendship and teamwork from everyone involved.

For a first feature film, My Hero Academia: Two Heroes holds up to the series mantra of “Plus Ultra,” satisfying die-hard fans of the anime as well as introduce newcomers into this endless dynamic battle between teen heroes and villains.