Review: Nerve dares you to watch and play along with the game. 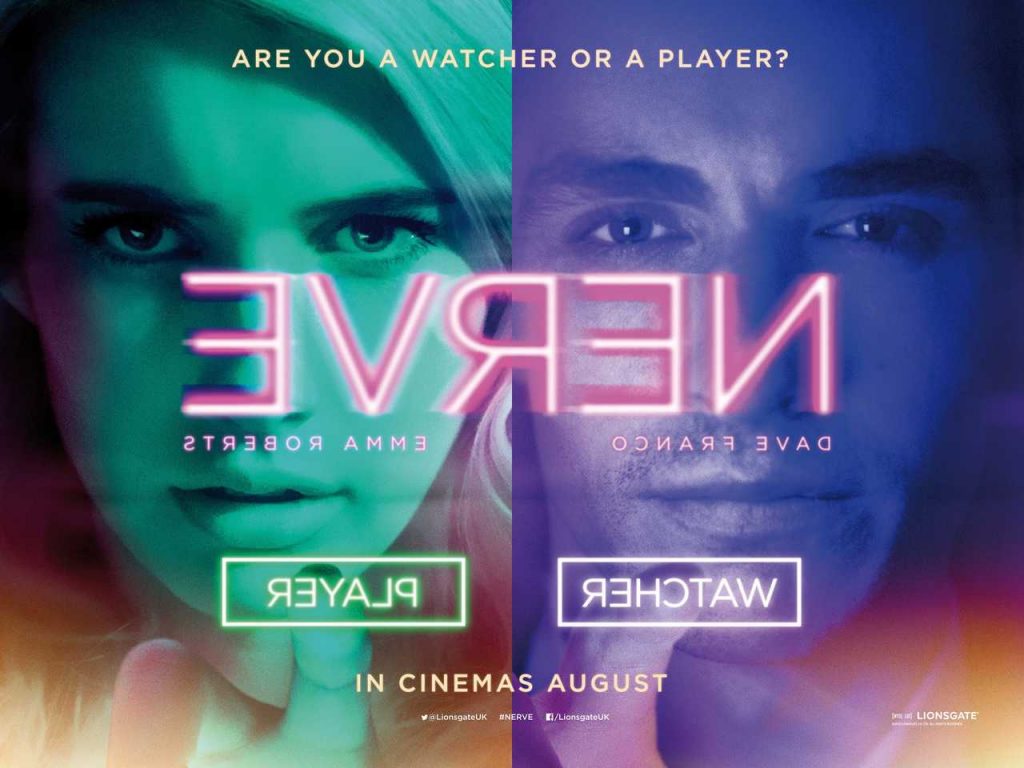 Vee (Emma Roberts) is a shy high school senior who has played it safe throughout her four years in high school. She has never talked to the guy she likes nor has she ever spoken up to any of her friends about their reckless behavior. After being publicly humiliated by her friend Sydney (Emily Meade), Vee decides to take a risk and become a player of this new online game known as Nerve. What starts off as a seemingly harmless game of truth or dare quickly pushes Vee out of her comfort zone into a world filled with unknown and dangerous consequences.

Truth be told, I didn’t quite know what to expect from Nerve upon heading to the theater to see this special early screening. The trailer left me feeling rather indifferent but with a screening over 3 weeks prior to the film’s release, I took it as a good sign and went in with an open mind. I will tell you right now that Nerve is geared towards this new generation and will most likely work best for Millennials and Generation Z. It is a film geared towards those who spend most of their time using technology, on social media and are super glued to their phones.

I fall somewhere in-between the technology obsessed generation and generation X. I grew up without computers for the first 10 years of my life and was introduced to them in or around the 4th grade. With that being said, I thought Nerve was one hell of a good time and kept me entertained from start to finish. I am not going to lie, the story does require audiences to check their brains at the door as there are far too many coincidences to make this story remotely believable but I am surprised by how little that actually bothered me. 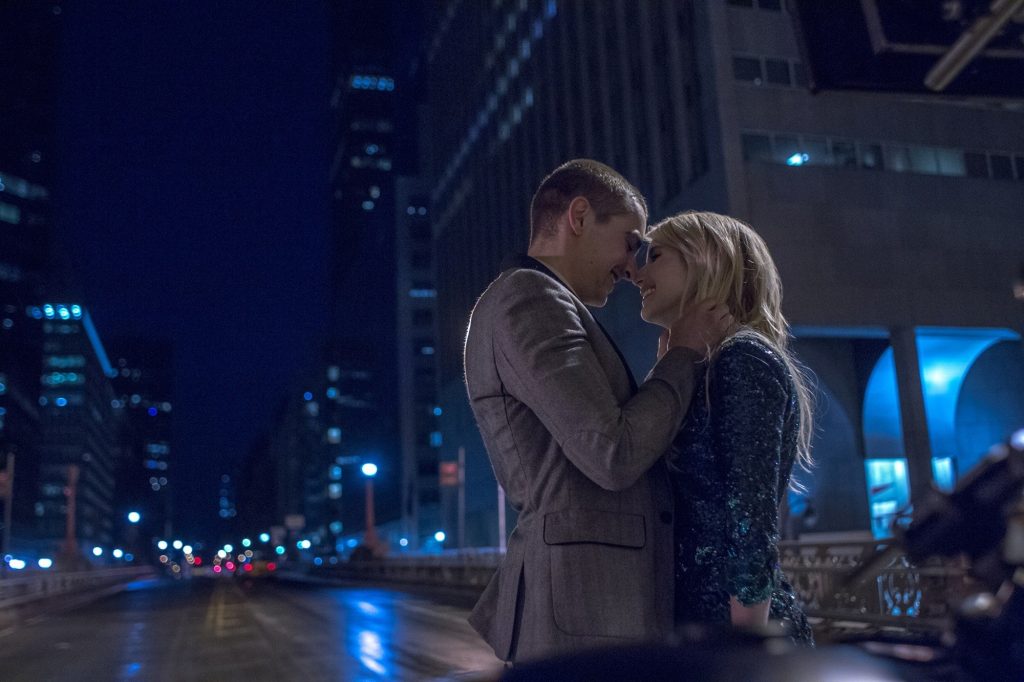 Nerve starts off rather quickly with the whole “game” concept being introduced within the first few minutes of the film. The setup is good enough that you believe and understand why Vee would take the challenge and sign up to play Nerve. As the film progresses, you can’t help but be sucked into the story and are so interested to see just how the night will play out. The game starts off with shy Vee having to do things outside her comfort zone. The idea of kissing a stranger isn’t too farfetched nowadays and serves as a great way to start the relationship between Vee and Ian (Dave Franco). It isn’t long before this kiss between two strangers quickly becomes an intense thrill ride that never slows down.

The scene where Vee and are dared to ride a motorcycle through NYC blindfolded is incredibly intense and had me gasping for air. This particular scene as well as some other scenes including a ladder scene are loaded with intensity and will have audiences on the edge of their seats. I honestly think if you are someone who struggled with the tight-walk scene in The Walk; you will definitely experience some anxiety while watching some of the sequences in this film.

I love that directors Henry Joost and Ariel Schulman were able to truly engage the audience with their film. As I said above, the film starts off believable but as the story unfolds the audience is met with one ridiculous scenario after another. The odd thing is that somehow the audience is still invested in the story and the two leads. Its a remarkable skill that a mystery/thriller like this one can achieve a level of such disbelief yet still manage to be entertaining. Its one of the things that most modern action films fail to do nowadays. 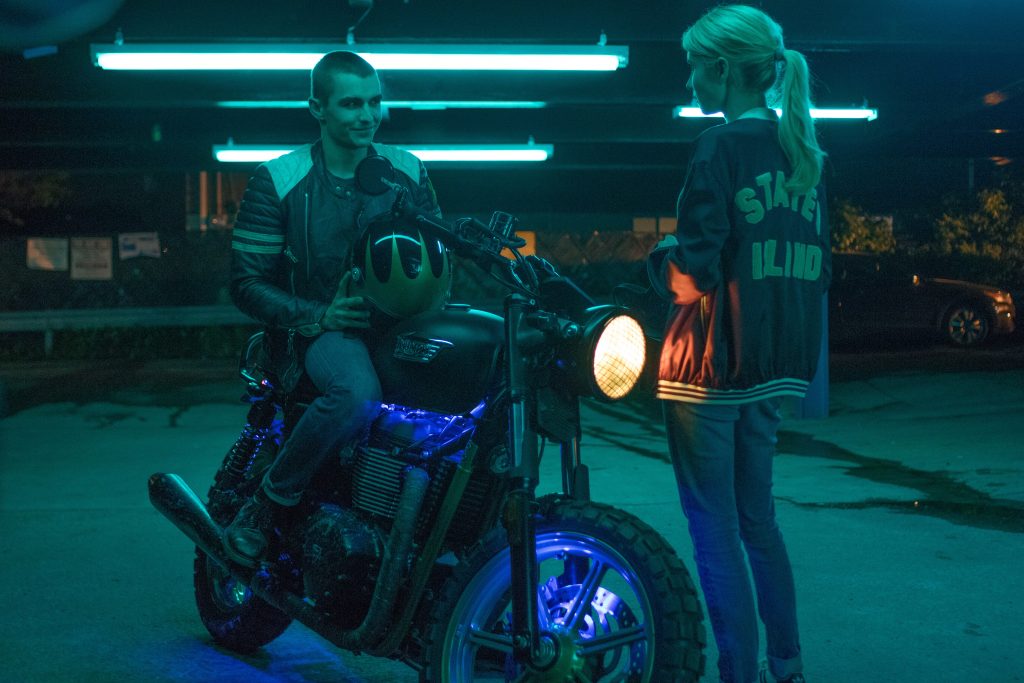 While the pacing of this story and the scenarios are all in the hands of Joost and Schulman, the performances by Franco and Roberts is the glue that holds the film together. If it wasn’t for these two, I really believe that Nerve wouldn’t have worked as well as it does. We have seen Roberts in several independent roles playing the sexually driven teenager but this role is a different type of teenager for her. Roberts has to tone down the sexuality playing Vee and instead becomes this shy and nervous girl. Franco, on the other hand, is the your standard cool guy with plenty of confidence. The two work well together on-screen and there is almost instantaneously a chemistry between their characters.

The supporting characters, however, are all pretty weak and are simply there when the story calls for them to matter. Emily Meade plays Sydney, the typical slutty teenager character and I found her performance extremely one-note. The fight scene between Sydney and Vee was as bad as watching a soap opera and to top it off, I didn’t really buy the friendship between the two characters from the start. Juliette Lewis plays Nancy, Vee’s mother, who really doesn’t have much to do outside of look at random bank alerts on her cell phone and call Vee’s friend Tommy (Miles Heizer) asking where Vee is. The character of Tommy was decent but again wasn’t given enough to do. I would be lying if I didn’t say that his character felt as though it was solely introduced to help with the film’s final act.

Speaking of the film’s final act, I was kind of surprised by the way the film ultimately plays out. While it isn’t as ballsy as I would have liked, I was satisfied by how it played out. It is hard to talk about the ending without giving way too much, so I will just say that the ending is semi-Hollywood yet manages to also showcase the dark-side of society and how we hiding behind technology. It also showcases the whole “safety in numbers” scenario and how people hide behind a crowd of people rather than showcase their true colors. 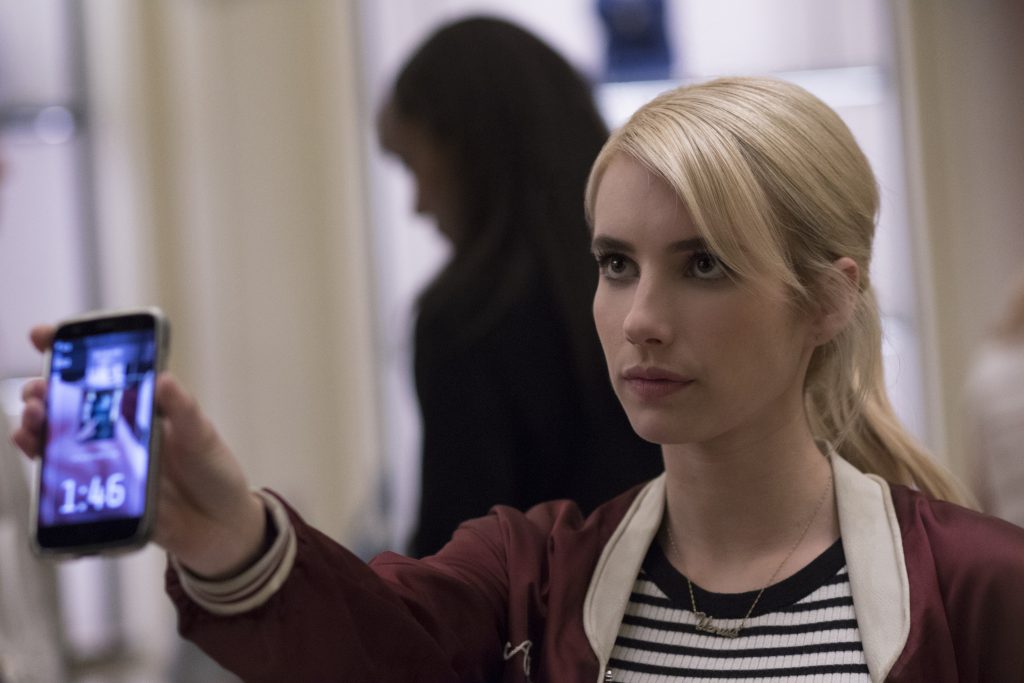 All in All, Nerve is mindless yet intense rollercoaster ride. Roberts and Franco are perfectly paired in this fun and entertaining “what will happen next” adventure. While I could have done without some of the clichéd teenage drama and random storylines that go nowhere, they didn’t take away from my overall enjoyment of the film. Nerve dares audiences to just sit back and watch while playing along with Vee and Ian as they embark on a non-stop entertaining time at the movies.

There is a photo of James Franco featured on the Huffington Post in one of the earlier scenes in the film. Roberts has worked with Franco on several projects including Palo Alto and I am Michael

There is a mini-reunion of Samira Wiley and Kimiko Glenn from Orange is the New Black. Wiley plays a hacker and has about 10 minutes of screen-time while Glenn plays a friend of Sydney and Vee who is an instigator of their erratic behavior. The two play a couple on Orange is The New Black yet don’t share a single scene together in the film.

Review: “Nerve” dares you to watch and play along with the game.

Review: Nerve dares you to watch and play along with the game. Vee (Emma Roberts) is a shy high school senior who has played it safe throughout her four years in high school. She has never talked to the guy she likes nor has she ever s...
0
Average User Rating
0 votes
Please sign in to rate.