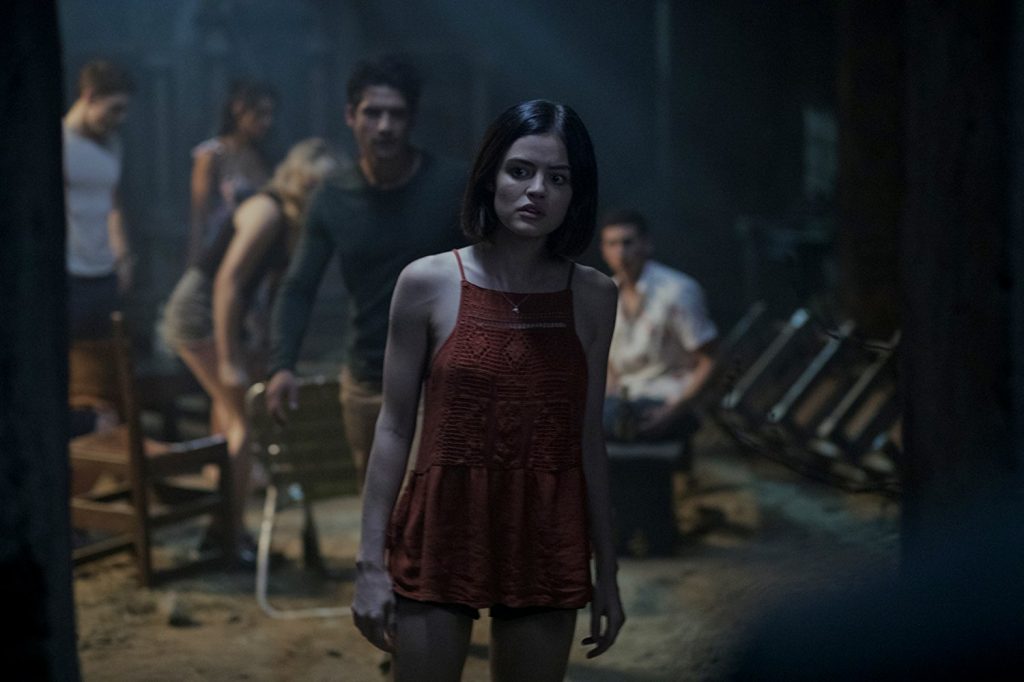 Truth or Dare is a big miss for terror gurus Blumhouse Productions. It fails to elicit the scares it wants to but instead leaves all the pretty people overacting their way through a pretty dumb horror-film construct.

I’m honestly not too surprised this film doesn’t work because even from the trailer, you can see how the premise isn’t a very strong one. As it goes, six college friends go to Mexico for spring break. There’s Olivia (Lucy Hale), a do-gooder who wants to spend her spring break building homes for Habitat for Humanity but is coerced into going by her best friend, Markie (Violett Beane). Along for the ride is Markie’s boyfriend, Lucas (Tyler Posey), who Olivia might also have a crush on, plus a few other friends.

They naturally have a great time, getting drunk and posting pics and videos to their social media, but on their last night, Olivia meets a cute guy, Carter (Landon Liboiron), who tells her he knows a great place where they can go for some more fun. He ends up leading Olivia and the rest to a burned-out mission, and while they all want to leave almost immediately (they should have), Carter convinces them to stay for a few beers – and to play an innocent game of Truth or Dare. Ah, yes, the plot thickens. 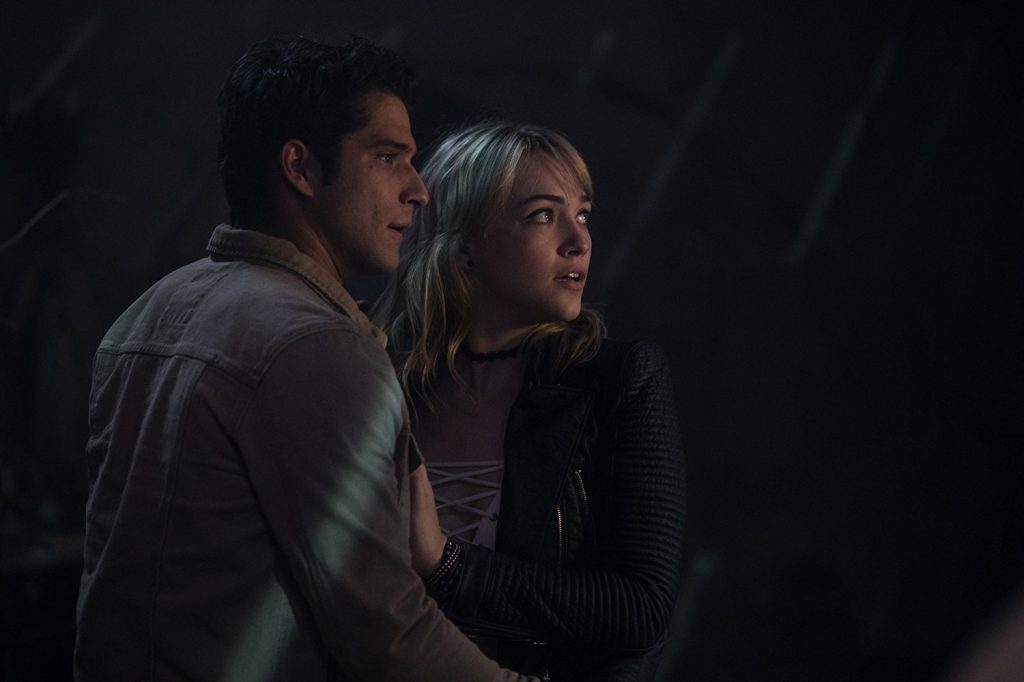 What they all don’t know, of course, is that once you accept a Truth or Dare question, you’re all in, like, forever. When the kids get back to school, they soon realize the game is still being played and if they don’t either answer a truth question or do a dare, they die. Say what? A few of them die right off the bat because who’s going to believe if you decide to bag on a dare or lie on a truth, you’ll get a demon smile on your face and stick a pen in your brain through your eye. Oh, but they all soon believe, trust me.

While I’d also love to tell you there was a really cool and terrifying reason behind this deadly game, I can’t. When it’s discovered how it all came about (something to indeed do with demons), it’s actually one of the more laughable scenes in the movie, and there are a few times you laugh out loud when you’re not supposed to.

Like I said, I had a feeling Truth or Dare was going to be lame, but there was a sort of hope that at least the deaths would be inventive or disturbing and creepy but no, not really. I will, however, give some credit to the way the movie answers some questions we are all asking. Like, why don’t they always just say truth? That way none of the dares can be dangerous. It’s addressed but quickly shuttled because, in this particular game, which wasn’t actually started by our group of victims, the rule is set that if there are two truths in a row, the next one has to be a dare. D’oh! And also the truths are damaging as well because apparently everyone in the movie has deep dark secrets that if exposed would seriously be upsetting to others. 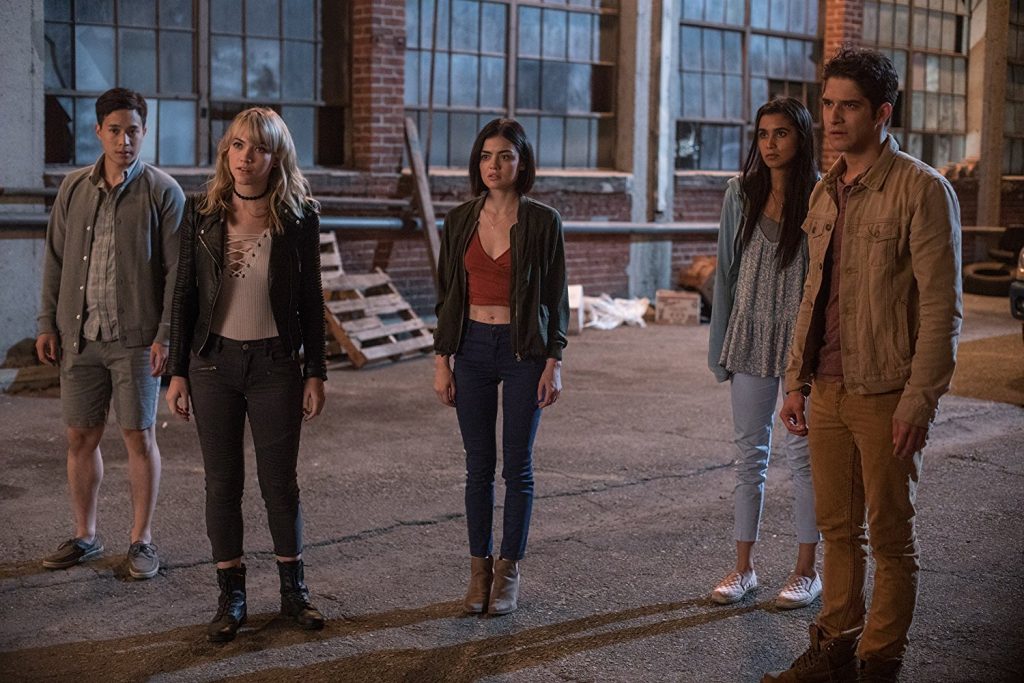 The actors do their best to make this whole mess plausible. It is indeed a lineup of gorgeous TV people, including Pretty Little Liars star Lucy Hale, Teen Wolf actor Tyler Posey and Violett Beane from The Flash, who all have the cache that will definitely bring in an audience, especially Hale since this is one of the first things she has done since her hugely popular show ended its run. Unfortunately, none of them really do anything above and beyond the usual over-the-top, why is this happening and how can we stop it? fare. Save for maybe Beane, who has the most emotional story arc and handles it pretty well. Again, does the acting ever really count in these movies? Not really, but when a standout performance does happen, we are appreciative. Take for example Jessica Rothe in Happy Death Day, another of Blumhouse’s horror movies, who takes the horror comedy aspect and runs with it. Truth or Dare could have totally used more moments poking fun at itself.

Director Jeff Wadlow (Kick Ass 2; The Strain), who is also credited as one of the writers, also doesn’t do anything special with this. It’s all standard without anything creative involved. The only sort of interesting thing about the movie is the ending moment. Because the idea of this game is that in order to survive, more players need to play it, there’s a mean-spirited twist that made the whole audience groan, gasp (and yes, laugh) as they walked out of the movie.

Truth or Dare will appeal to younger audiences, of that I’m certain, and they’ll most likely dig the twist at the end. But overall, this seems more like an afterthought in the usually top-notch Blumhouse horror vernacular. Guess they can’t always hit it out of the park.