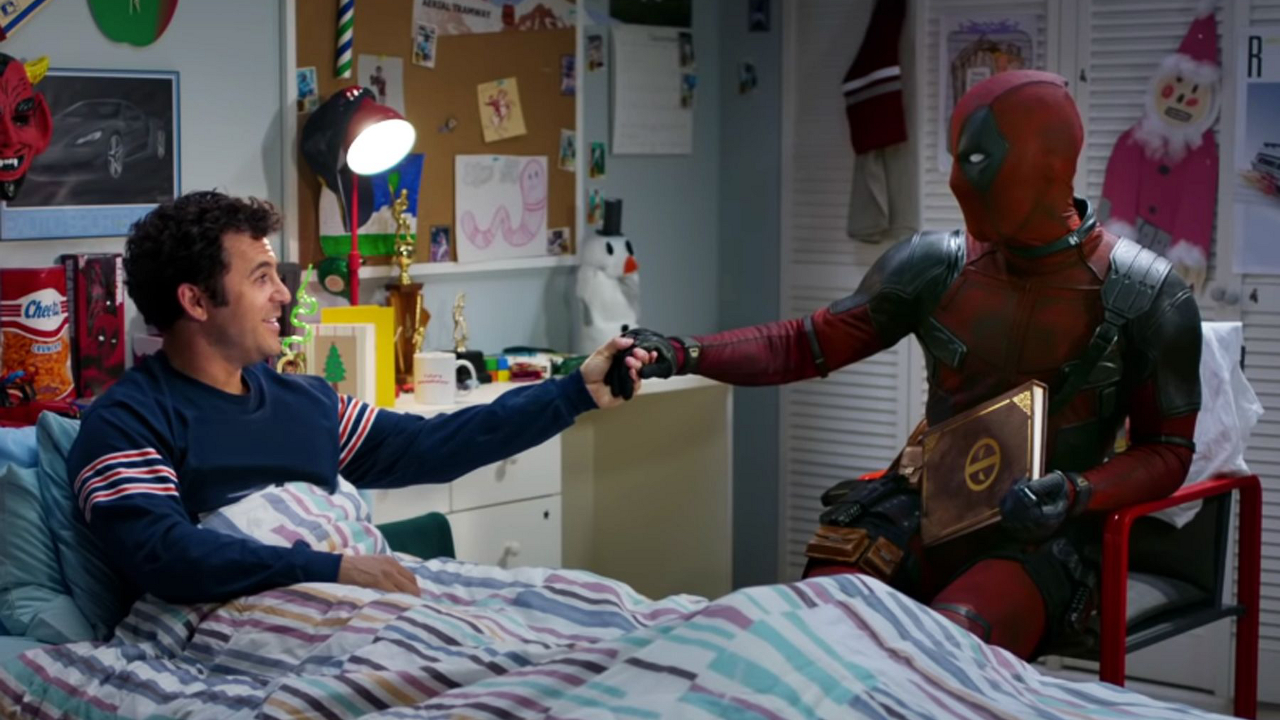 In the span of seven months, Deadpool 2 has undergone three separate cuts. We probably haven’t seen a film tinkered to this extent since Oliver Stone’s four (yes, four) distinct versions of Alexander. After its theatrical release, a longer Super Duper $@%!#& Cut debuted as raunchier and fleshed out alternative. But with the holidays right around the corner, Fox opted to release a third cut. Once Upon a Deadpool tones down the Merc with a Mouth’s signature potty mouth and gory antics.

Reduced to PG-13, Once Upon a Deadpool waters down the craziness and shock value from Deadpool 2. Supposedly, this is deemed the version that’s suitable for children and grandparents without getting offended. After all, offending someone is so easy nowadays. At its core, Once Upon a Deadpool remains the same story as Deadpool 2. Well, mostly. It’s been two years since the events of the first film and the red-suited superhero (Ryan Reynolds) is immediately stuck by an unexpected tragedy. Hoping to set matters straight, he assists X-Men teammates, Colossus (Stefan Kapicic) and Negasonic Teenage Warhead (Brianna Hildebrand), to minimize a mutant situation concerning a troubled Russell (Julian Dennison). Besides the X-Men, a cybernetic warrior named Cable (Josh Brolin) also has his sights on the young boy.

In its own right, Deadpool 2 is an entertaining follow-up to the breakout 2016 X-Men spin-off. Director David Leitch (Atomic Blonde) built upon Tim Miler’s vision, adding depth to the character beyond the relentless vulgarity that could even make the most foul-mouthed blush. I mean, who would’ve thought at the end of Deadpool 2 that a tear or two would be shed. Well, at least in theatrical cut before the Super Duper cut began screwing around with the music. Once Upon a Deadpool lacks any equivalent emotional punch, removing critical character moments. The latest round of editing drastically defeats many of the beats that succeeded back in May. Deadpool’s personal growth and particularly Brolin’s Cable take the biggest hits.

With the cohesive narrative absent, Once Upon a Deadpool fills in the gaps as Deadpool narrates his own film as a bedtime story to Fred Savage. The framing device is eerily similar to that of The Princess Bride (which also starred Savage). The Wonder Years star finds himself unwillingly strapped down to a bed as Deadpool reads on through a “child-like prism.” In typical Deadpool fashion, it’s creepy, yet worth an initial chuckle. For those revisiting Deadpool 2 for a second or third time, the Savage and Deadpool banter is what’s enticing about an inevitable rewatch. Unfortunately, we’re hardly returning back to the duplicate Princess Bride bedroom enough times for it to trump the deleted content.

It ultimately gives Deadpool more reasons to become more meta. He censors himself when it comes to F-bombs. Another other profanity in the book seems fine by the MPAA. So much for being a wholesome family-friendly holiday movie. Deadpool takes more jabs at the fine line between Disney’s Marvel Cinematic Universe and whatever Marvel films Sony and Fox have been produced. It’s more of the same, except sterilized to some extent. For the most part, the Once Upon a Deadpool experiment is rather awkward with a few funny moments sprinkled throughout. Fox is trying to push PG-13 to the limit, yet sweeps the carpet from under with an identity crisis. Did we learn nothing from X-Men: Origins – Wolverine a decade ago? By no means is Once Upon a Deadpool an unforgiving interpretation like Origins. This is an edit job we’re more used to on some random cable network, not the big screen.

Deadpool constantly talks about giving maximum effort in his films. While the theatrical cut accomplished that belief to some degree, Once Upon a Deadpool is far from being the best present from the Merc this year.

Review: ‘Once Upon a Deadpool’ Goes PG-13, Falling Short of Holiday Maximum Effort