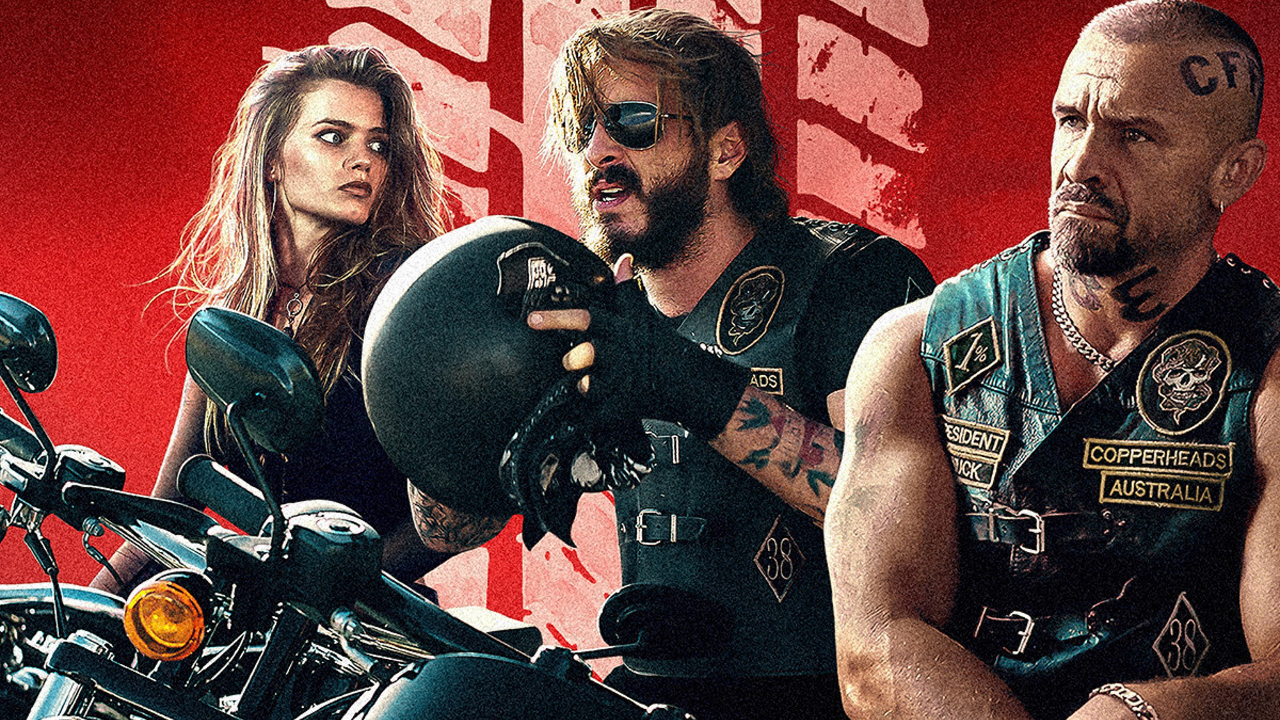 Australian motorcycle drama, 1%, has roots dating back on the 2017 Toronto International Film Festival circuit. Now referred to as simply Outlaws, there is less emphasis on the weight of the previous title. While it’s stitched into the motorcyclists’ leather vests, it takes a little bit of digging to piece together its true meaning. It’s believed that 99% of motorcyclists abide by the law. The remaining 1%, however, partake in a seedy, criminal underworld playing by their own rules.

For three years, there’s been a status quo within the Copperheads. President Knuck (Matt Nable) has been in prison, paving the way for heir apparent Paddo (Ryan Corr) to mold the motorcycle club into a less shady organization. Paddo’s younger brother, Skink (Josh McConville) messes up a deal with another local club. Skink unfortunately doesn’t know any better, forcing Paddo to fix the issue with as little bloodshed as possible. Matters grow worse when Knuck is released from prison, holding firm to his violent standards. Torn between loyalty to his brother and to his president, Paddo finds himself caught in a horrific predicament.

After FX’s Sons of Anarchy wrapped up shop in 2014, others have attempted to grab the sub-genre reins. Kurt Sutter reignited genre interest this past fall with Mayans M.C., the spiritual successor to the FX series. Outlaws does pique some interest into the world of bikers and motorcycle gangs. Though it’s more of an appetizer covering the basics over the course of 90 minutes. That boxes the narrative in a a bit, but the overall conflict is represented. Outlaws attempt to go full civil war within the Copperheads as Paddo and Knuck butt heads in ideals and the fate of Skink. Corr and Nable square off adequately as much of the film is glued together by their power struggle. First-time feature director Stephen McCallum boils it down to the two gang members, dipping into Shakespearean vibes more often than anticipated.

Much of that stems from Paddo’s girlfriend, Katrina (Abbey Lee). She’s his driving force, a power behind the throne if you will. While Paddo and Knuck clash is a focal point, all eyes will be on Lee’s character. The Mad Max: Fury Road actress is provided a delicious angle to toy around with thanks to Matt Nable’s screenplay. Ironically enough, Nable hands off the film’s highlighting roles to one of his character’s most devious adversaries. While Fury Road and The Neon Demon are two of my personal top films of the past five years, neither film gave Lee a meaty performance quite like the one here in Outlaws.

Outlaws doesn’t descend into chaotic storytelling, though there’s this temptation to play with the anarchy that goes hand-in-hand with the sub-genre. When it wants to be gripping and arresting, it has no issues going full throttle. Granted, Outlaws does spend most of its run time in the midst of tense verbal confrontations. But it’s not until the finale when character decision begin having a ripple effect on the Copperheads and immediate family members.

McCallum hits certain marks when it comes to Outlaws. Though there are elements that are teased rather than tapped into. But within 90 minutes, it feels more comfortable as a straightforward narrative than layering on a few more earned dynamics. Outlaws may be a bit small in scope, but McCallum’s examination of the 1% has its fair share of merit to consider.

New to Blu-ray: ‘Blair Witch’ Makes Another Trip Back to the Woods
January 3, 2017

Review: ‘Outlaws’ Brings Some Full Throttle Anarchy From Down Under