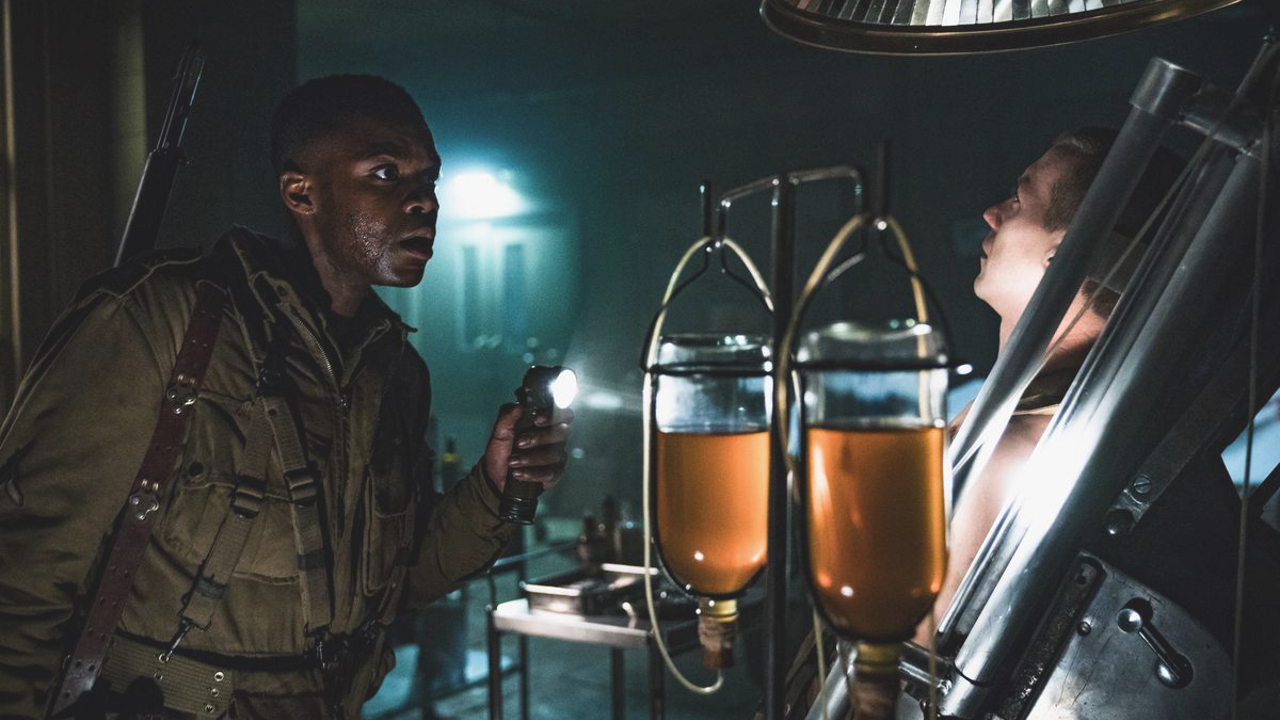 If Overlord debuted a few months earlier, this J.J. Abrams-produced zombie flick would’ve been a pitch-perfect drive-in experience on some steamy summer night. No longer speculated to be the fourth chapter of the rapidly eroding Cloververse (thanks Cloverfield Paradox), Overlord showcases its capable hand at period horror and wartime turbulence without ties to a preexisting property. Distinctiveness clearly works in its favor, diving headfirst into this seasonal sea of constant reboots and sequels.

On the eve before D-Day, American paratroopers are secretly flown into Nazi-occupied France, tasked with disabling a German radio tower atop a church. Their plane is taken out within minutes, leaving the five remaining soldiers with only their wits to complete the critical mission. Ford (Wyatt Russell) and his surviving regiment, including Boyce (Jovan Adepo), Tibbet (John Magaro), Chase (Iain De Caestecker) and Rosenfeld (Dominic Applewhite), find themselves dropped into the heart of enemy territory. Evading countless Nazis and landmines, the American navigate their way to a French town near their target thanks to civilian Chloe (Mathilde Ollivier).

Overlord tinkers with pinpointing that perfect balance between a semi-serious World War II drama, while sinking its teeth to a Raimi-esque zombie fest. It’s much harder than it sounds. Indie Australian director, Julius Avery (Son of a Gun) handles himself with plenty of promise, exerting the various tonal shifts when required. While Overlord demands a bit of a slow burn to reach that undead mayhem, there’s a massive injection of a balls-to-the-wall B-movie payoff in the final act. Yes, a considerable chunk of the film is devoted to the soldiers shacking up at Chloe’s. Screenwriters Billy Smith (Captain Phillips) and Mark L. Smith (The Revenant) don’t waste a second of tension when Nazi baddie Wafner (Pilou Asbæk) shows up on her doorstep.

SEE ALSO: Review: Overlord Brings You to Hell and Back

Characterizations are hardly prioritized as each of our five soldiers is played off as one-dimensional. Between an obsessive photographer, a smarmy jerk and a by-the-numbers commander, there’s minimal rooms at development here. While bullets and blood outrank our characters, there’s enough to remain invested in. Though, it’s mainly Adepo’s Pvt. Boyce who’s faced with various situations of moral ambiguity and duty. The Fences star is allotted the most time to progress,  bumping up from a supporting role in the 2016 Denzel Washington film to narrative linchpin here in Overlord. Games of Thrones‘ Pilou Asbæk carries over the villainy as Wafner. Interchangeable with pretty much any other Nazi villain in recent memory, Wafner wields his twisted psyche and resilience to act as a formidable thorn in their side.

Overlord screams video game movie from start to finish. Ordinarily, the words video game and movie clash relentlessly, but not here. Just look at the countless video games that crossed over into film and fell flat on their faces. Framed as a pseudo-video game, Overlord defies the genre pitfalls, emerging from the ashes as one hell of a good time. Between mindless zombies, super serum, flamethrowers and underground campaigns, the chaotic 110 minutes locks and loads with sheer excitement and ironically soul that’s been lacking as of late. Not since Quentin Tarantino’s Inglourious Basterds has a film indulged itself in plowing down Nazis with such stylized violence that pushes that one extra mile.

Director Avery has a good eye for bending genres, seeking out a satisfying, yet eventful two hours for his audience. In the same vein as a Sam Raimi, Quentin Tarantino and Robert Rodriguez, Avery takes command of a B-movie and molds it into something beyond expectation. Overlord has its sights on being a cult film down the line. It wouldn’t be that much of a stretch for that to come into fruition.