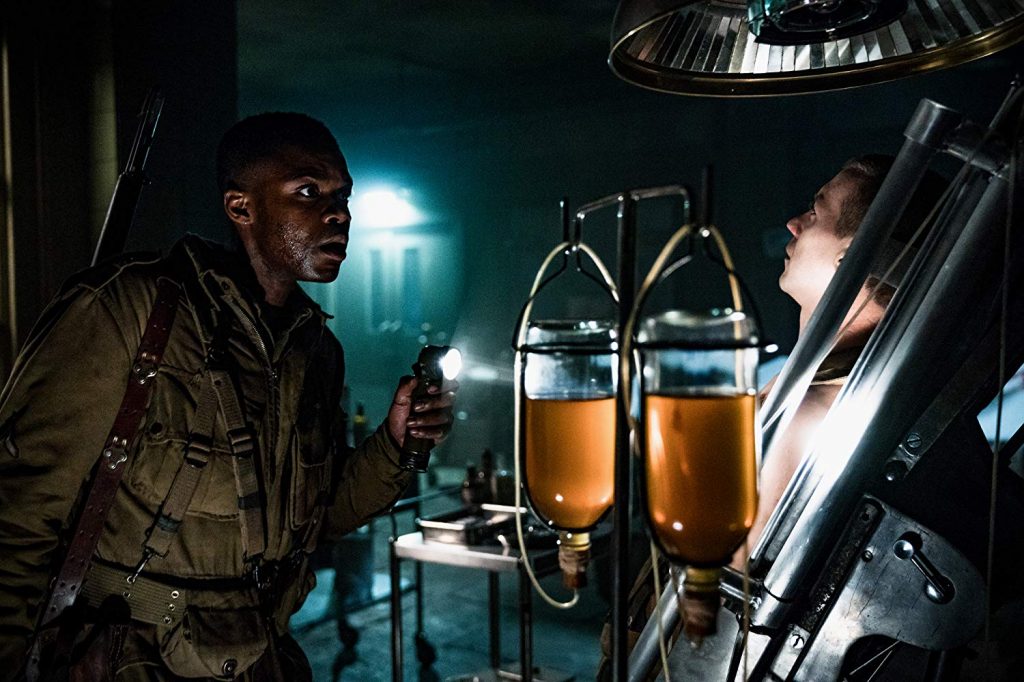 Hitting right between a month many reserve for horror and the big holiday blockbusters set to arrive alongside various award contenders is Overlord, a gnarly genre-bender that kicks down the doors and fills the room with its wild presence. Providing a mix of war movie tropes, a lot of loud action, and a big splash of horror, J.J. Abrams’ Bad Robot Productions made good on delivering the sort of extreme B-movie horror fans, and action junkies would be proud to see on a big screen.

The story is the kind of rock-solid premise one could expect from a limited comic book series or a video game. A paratrooper squad is sent to destroy a German radio tower in an old church on the eve of D-Day. Only a few of the soldiers even manage to make it to the French town where the tower is located, but that’s just the beginning. Also contained in the church is a secret lab where Nazis are performing experiments to create zombie supermen in an attempt to build an unstoppable army for Hitler.

Yeah, this film sets up an insane idea, but it doesn’t let the fantastical elements override the operation. As big as Overlord presents itself as when it comes to the environments, action, and horror, the film wisely uses the down moments early in its runtime to establish characters and have the viewer take note of important behaviors. Make no mistake, Overlord is not the most nuanced film when it comes to taking on familiar WWII movie clichés, but the cast is solid, and there is terrific production value and technical achievements to behold. 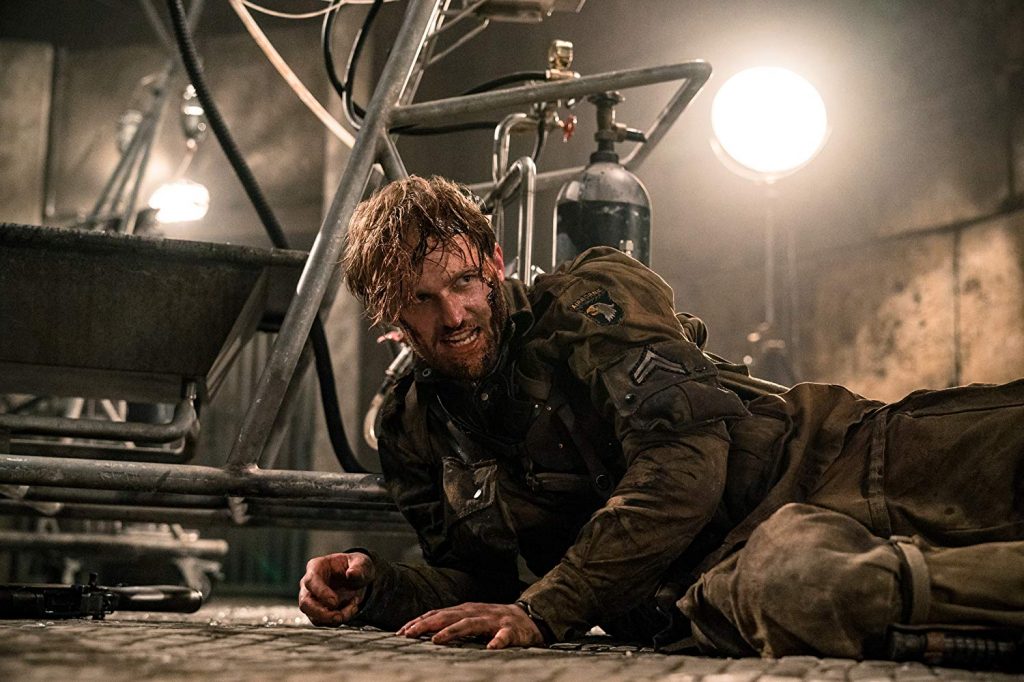 Director Julius Avery seems to fit right in when it comes to playing around in a J. J. Abrams production. Armed with a script by Billy Ray and Mark L. Smith, with cinematographers Laurie Rose and Fabian Wagner at his side, Avery has Overlord make a meal out of its WWII setting and the infusion horror and lots of thrills into the mix. The story makes the objectives clear, weaves in some character work, and never rests, once it comes time to tear up some Nazis. As this is all taking place, we get some incredible sound editing and a visual feast of war-torn environments, exhilarating action set pieces, and horrific displays of monsters at work.

As opposed to the standard use of desaturated colors and other ways to create a muted aesthetic to depict the horrors of war, Overlord goes the other direction. This is a colorful movie, making it all the more expressive, as well as grisly. Following an explosive trip form the sky, there’s a beautiful shot of a soldier trapped under cool blue water. Moonlit shots of that same soldier lead to his traversal through green fields. Things get much heavier later, as we see evil Nazi scientists pump orange goo into test subjects, while blood manages to spill everywhere, in all its glory. This may not be an Italian horror film, but there’s a refreshing sense of pop to all the colorful sights that certainly adds to the surreal nature of this heightened war thriller.

Overlord also wouldn’t be so strong if it were not for its solid cast. Look, none of these people are going to win many awards for their work here, but even the most thinly-written characters have enough to work with to have an audience care if this group can make it out alive. Fences’ Jovan Adepo is our lead as Pvt. Boyce. Wyatt Russell brings a quiet cool to his Cpl. Ford. John Magaro and Iain de Caestecker factor in as other soldiers of note. Newcomer Mathilde Ollivier co-stars as Chloe, a French civilian who both aids the Americans, and manages to hold her own under pressure. And then there’s Pilou Asbæk as the big bad Nazi officer to look out for.

Each actor has their moment to shine, but keep your eye on Russell and Adepo. Dialing back scruffiness in favor of a quiet menace, Russell has a dark side that allows the film into areas questioning just how far motivation and intentions should go in the line of duty. Meanwhile, Adepo serves as our eyes, as he finds his way into the middle of a horror show fit for the real-world experiments performed by Josef Mengele. Putting these two together allows Overlord to extend a hand towards considering some deeper layers beneath the ultraviolence, as opposed to brushing off intriguing questions in favor of non-stop blood and gore.

Of course, if wanting a good time by way of explosions, gun fights, and zombie action is what is being asked for, Overlord has its audience covered. An opening sequence features the escape from a plane that’s being shot down. Another scenario finds Adepo’s character navigating the labyrinth that is the Nazi lab, discovering all sorts of bloody experiments along the way. Russell’s Ford is involved in some violent encounters that provide plenty of bang for your buck. And let’s not forget the handy use of flamethrowers when it comes to both WWII and creature features.

Years from now, fans will be able to show Overlord to friends, without having to make a note of its horror twist. It will ideally provoke a reaction akin to the kind I enjoy when revisiting Robert Rodriguez’s From Dusk Till Dawn with those who have not seen it. Currently, however, there’s no getting around the nature of this film, but it’s not much of a concern. Director Avery has delivered a hell of a ride, making every dollar count to produce a wildly exciting feature, that doesn’t shy away from the grit and gore. This is genre-bending at its finest when it comes to B-movies with A-quality production value, and I applaud the work done to make a killer war/action/horror flick with a pulse. 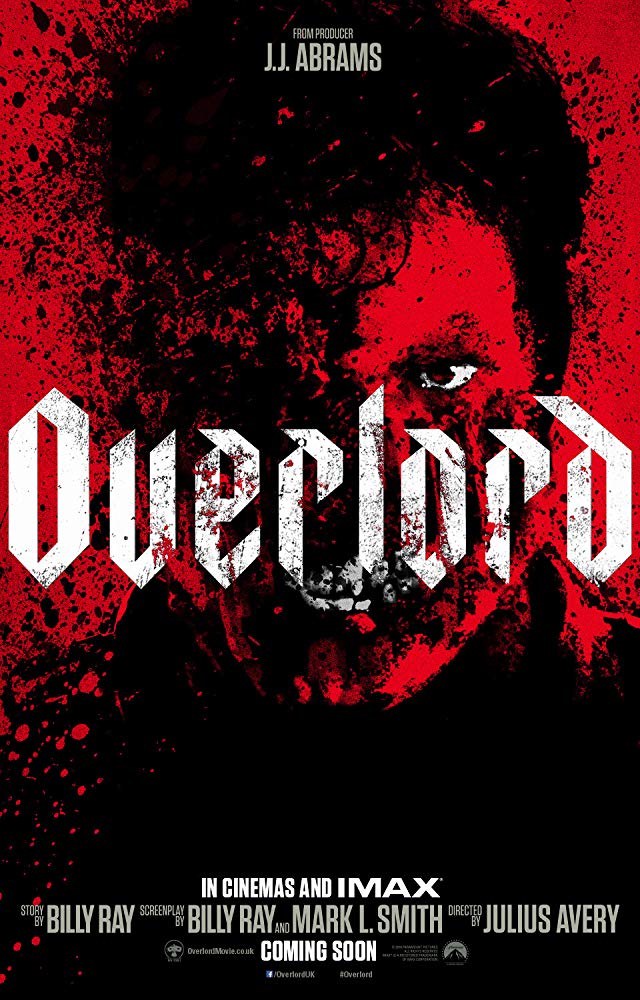