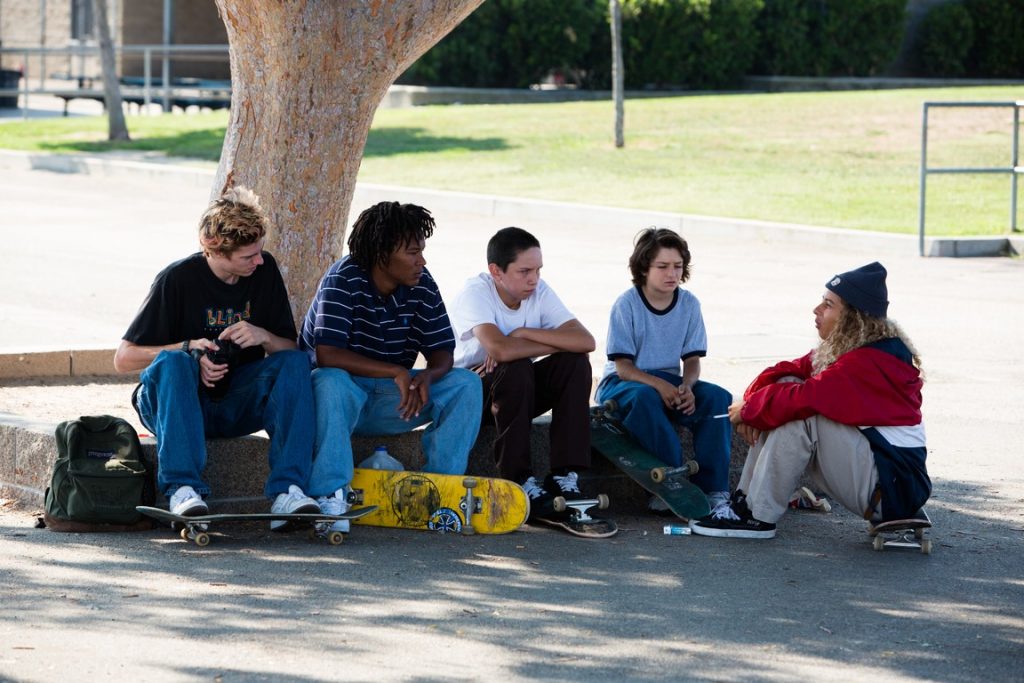 We’re now at a point where films from an emerging artist play like an homage to The Sandlot. That 90s cult favorite for the older Millennial crowd was, of course, indebted to films such as Stand By Me or even American Graffiti. Those films called back to nostalgic memories and stories heard by those filmmakers. Basically, these young male-focused coming-of-age tales all have a way of inspiring the next generation, which falls in line with what writer/director Jonah Hill is doing with the lead character of his film, Mid90s.

Set during a summer in Los Angeles (between hearing Seal’s “Kiss From a Rose” and spotting a PlayStation DualShock controller, I’m asserting it’s 1997), Sunny Suljic stars as 13-year-old Stevie. With a single mother (Katherine Waterston) oversharing, and an abusive older brother, Ian (Lucas Hedges), Stevie looks elsewhere for friends and something to do. Seeing a group of skater kids in the wild, he decides he also wants to be a skater. Stevie is no good at skating, but that doesn’t stop him from fitting in with the group quickly. That said, Stevie is incredibly impressionable, and this is not the most innocent of crowds to be hanging with.

I mentioned The Sandlot for a reason. Throughout the film, I couldn’t help but think Hill decided to use the skeleton of that story and twist it around for the sake of a darker, yet often humorous, film. There’s even less of a central plot to work with, but Mid90s is far more focused on the connections Stevie forms with his various new friends. 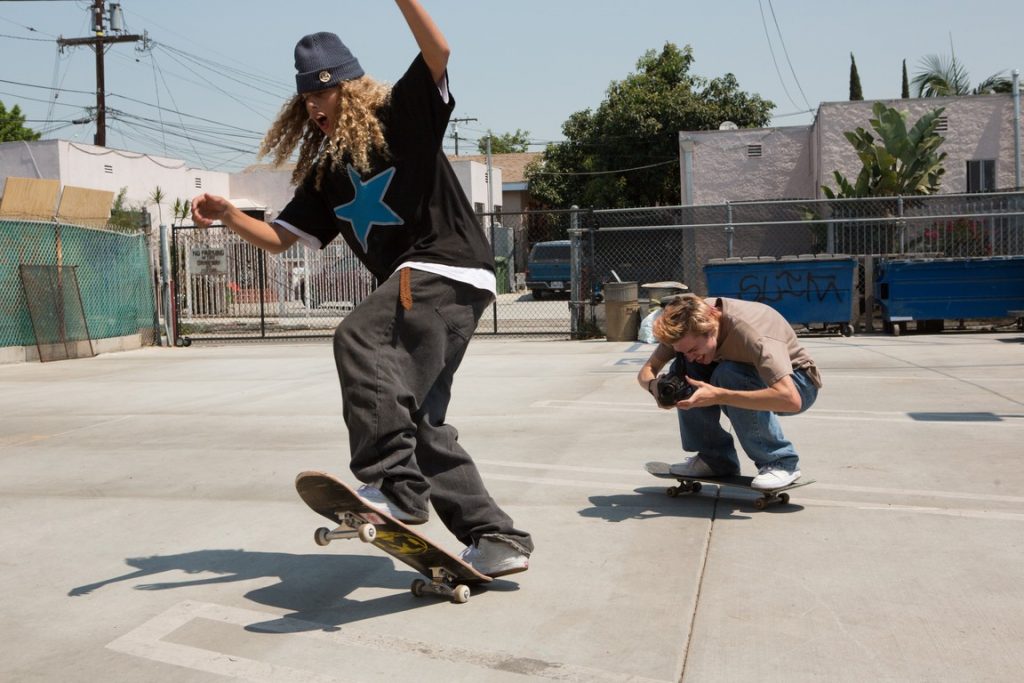 He starts with Ruben (Gio Galicia), the youngest before him, who is initially happy to have Stevie to boss around. That said, Stevie quickly impresses level-headed Ray (a notable Na-kel Smith) and the much wilder Fuckshit (Olan Prenatt). There’s also the quiet Fourth Grade (most of these kids have nicknames), but Ryder McLaughlin’s performance mostly sits in the background, as his character is continually filming with aspirations of making a cool skate video.

Stories like this often do what they can to deliver a message to the lead, ideally pushing them towards making the right decisions as they learn and grow from whatever events occur in the film. As impressive as Hill’s filmmaking is at times, the biggest obstacle in his directorial debut is developing the areas that work best. While the looseness of the film makes for authentic, profanity-laden conversations between teenagers, there doesn’t end up being much to tie it all together by the end.

The hope for a more significant impact may be lacking, but it’s not without trying. Smith’s work as Ray truly shines both due to the warmth he brings as a mentor and better version of an older brother when it comes to advice, and because the screenplay is forced to bring some good from a group of kids with real issues. There’s a lack of greater nuance beyond seeing these kids occasionally skate and smack talk their way through the day while covering deeper emotions sometimes glimpsed in their expressions. 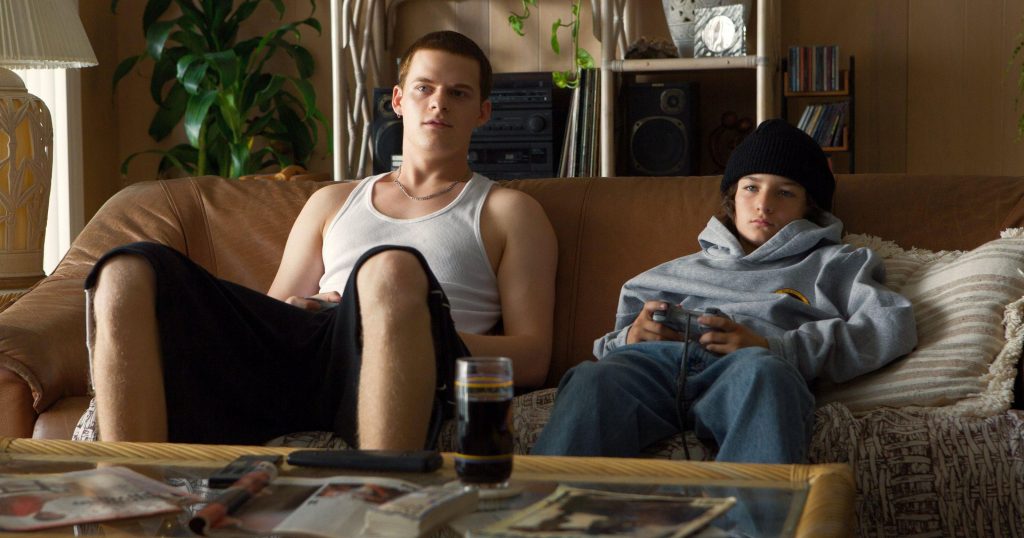 I was also a bit ambivalent about what Hill was trying to do with Stevie and his home life. While Suljic is terrific, Hedges works terrifically with the small amount he is given (I’m starting to see why others are so impressed with him), and Waterston rounds things out nicely, the film is a bit too lean on what’s going on there. This is most apparent with Stevie’s tendency to both feel rewarded for taking on new experiences, while also punishing himself for indiscretions. It allows for some tense scenes, but I wish it led to more.

In bringing his vision to life, Hill does find a lot of stylish angles to play. Shot on 16mm, and utilizing the 4:3 Academy ratio, there’s a purposefully boxed-in quality to keep things feeling tight and personal. It also means getting some wonderful scenes such as a cement playground flooded by skaters fleeing, once the cops arrive. One on one conversations also take on an appropriately awkward feeling, whether it’s how Stevie talks to his disapproving brother, or the rare instance when young female characters enter the film (though there’s a lack of regard for them beyond talk of hooking up).

Coming out of Mid90s one can see a sense of accomplishment. The ambition of this film feels pretty low-key, making it utterly fitting as an A24 release. Hill shows he can write and direct, even if he’ll be looking to increase his successfulness of delivery next time around. Still, with excellent work from young Suljic, Hedges, and Smith, and enough to enjoy in both the mood of the film (aided by a score by Trent Reznor and Atticus Ross) and the hip-hop soundtrack, Mid90s was worth hanging with. 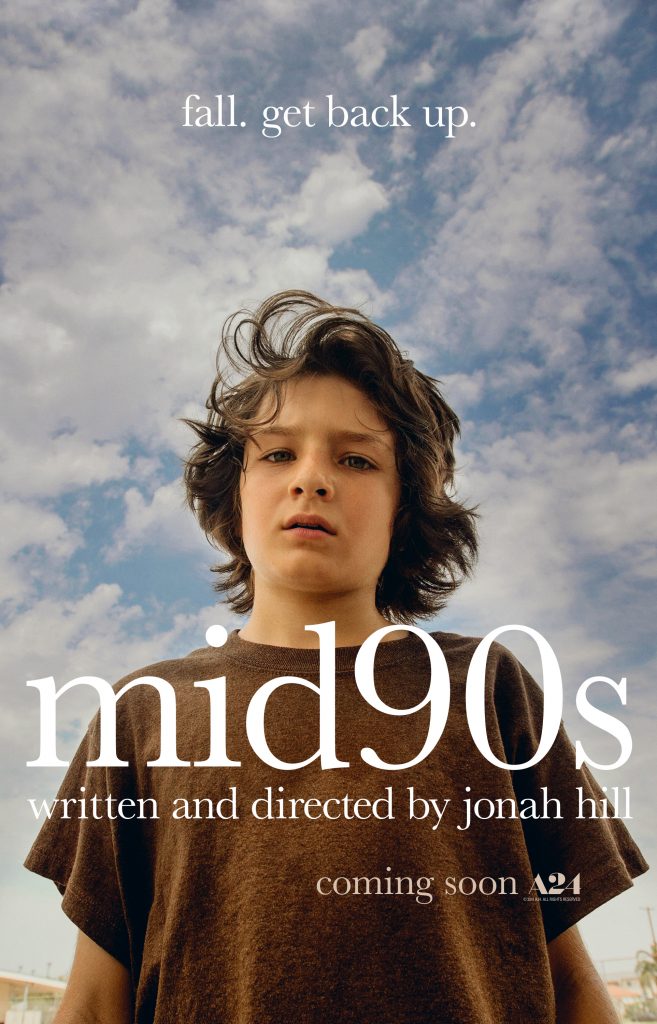