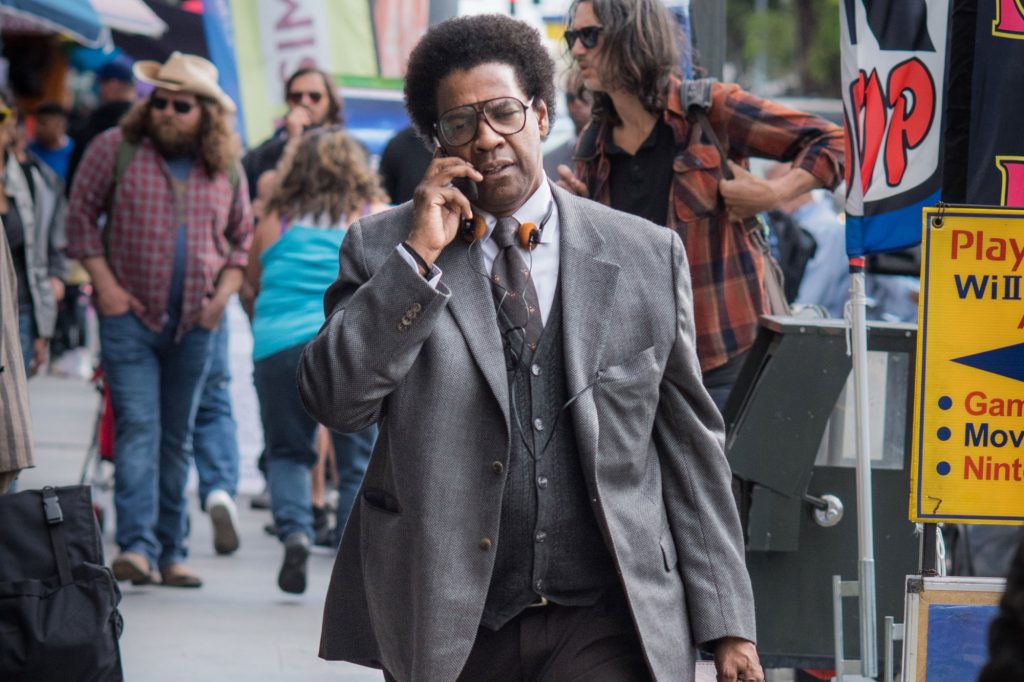 It is great to see established stars move out of their element in an attempt to challenge themselves. No one would accuse Denzel Washington of not being good at what he does, but Roman J. Israel, Esq. finds him delivering another tour de force performance that is wildly different from his other acclaimed roles. Writer/director Dan Gilroy has followed up his brilliant neo-noir, Nightcrawler, with another film indebted to work from the 70s. However, where Nightcrawler asked you to follow a disturbed individual, Roman J. Israel, Esq. uses Washington’s charismatic performance as the fascinating lead into a familiar yet compelling legal drama.

Washington stars as the titular Roman Israel, a liberal lawyer living in Los Angeles and doing his best to hold up his convictions in favor of the poor and disenfranchised. It’s made clear early on that Roman is on the spectrum, which has led to a unique working relationship. Roman does the research, while his partner handles the cases in court. When this partner suffers a heart attack, the story finds Roman grappling with changes to his status quo.

It means speaking with other attorneys and judges, as well as finding a new position. That leads to a possible new relationship with Maya (Carmen Ejogo), an activist who admires the old school style of crusading Roman champions, as well as George (Colin Farrell), the head of a large law office that could use someone with the skills Roman possesses. 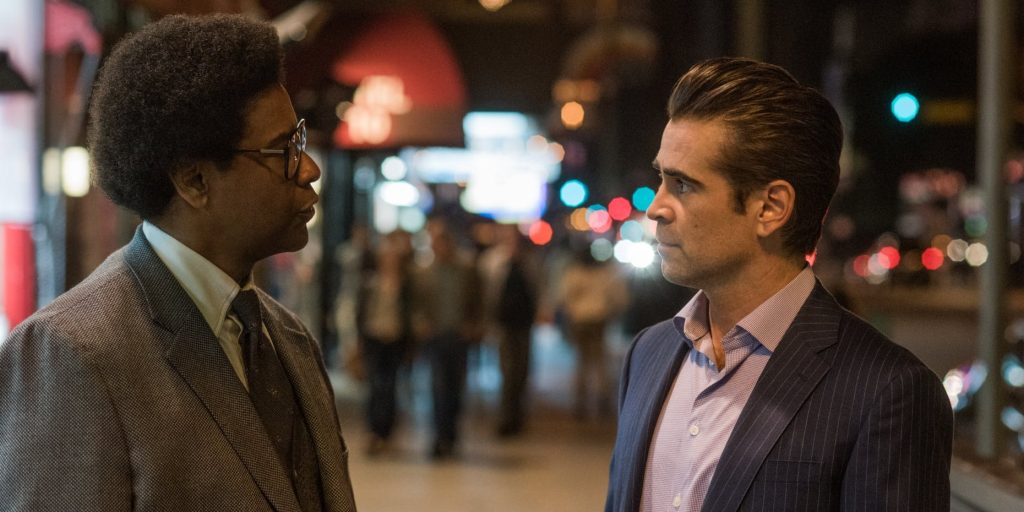 These characters are worth noting, but the film’s eventual plotting manages to elude everyone for a good while, as the film is so devoted to the persona of Roman. His interactions have an entertaining amount of awkwardness in them that speaks to both the skill Washington brings to a complex individual such as this and where this film’s passion lies. While specific choices do eventually place this movie in a position to let the audience see how all the pieces will fit together, Roman J. Israel, Esq. is pleased focus a lot of energy on establishing Roman and the type of person he is.

Portraying a savant can be difficult, but something a lot of films tend to miss out on is the understanding that an audience doesn’t need to know how everything works if there is confidence coming from those actions. This is especially the case with jobs, and a good film can make something as mundane as legal terms exciting if it trusts the audience to go along with the characters using them. For every bland businessperson, you get one actor who feels like they did the research to dig into what makes them skilled at their profession and that’s what informs Roman’s character. He’s a guy who you believe has memorized various legal encyclopedias and can recall intricate details about cases from years ago.

Having Washington in this role makes the film come alive, but Gilroy’s efforts as a filmmaker are entirely essential as well. There’s an odd approach to how things slowly come together, but it is intriguing to see a film take so much time exploring the different ideas and characters introduced, before leaning into a sturdier plot. As this all happens, the film benefits from nice touches, such as Robert Elswit’s cinematography that continues to show off his talents in filming modern Los Angeles city life.  Other elements that familiarize the audience with how Roman presents himself pay off as the film moves along and finds him exploring his personal changes. 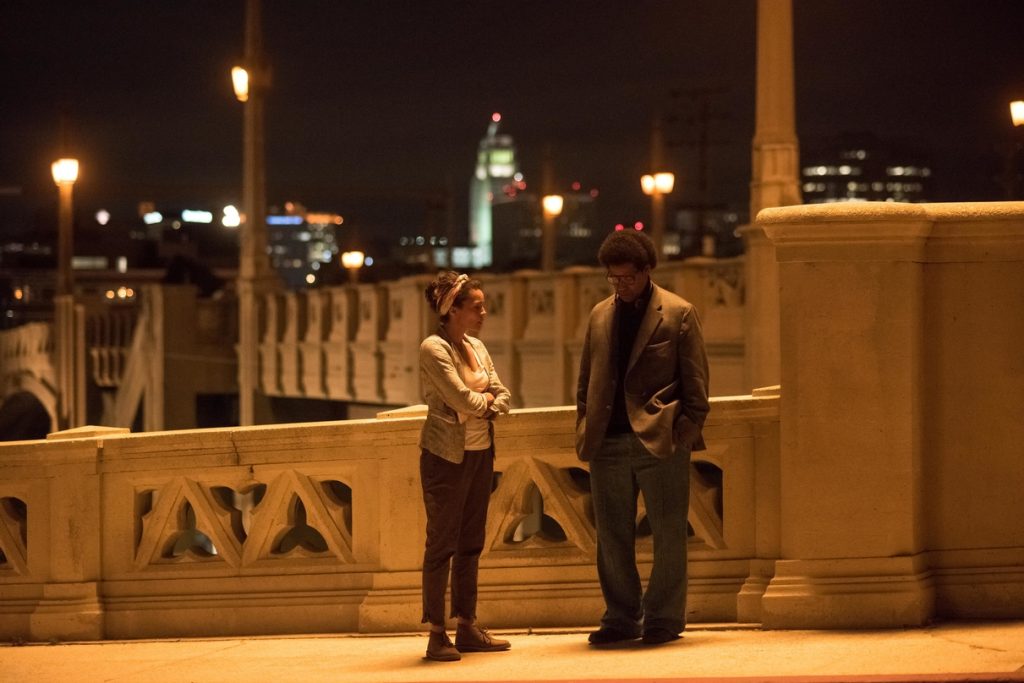 It does come down to Washington though, especially once the film finds its throughline. Roman has a frustration with how lawyers treat the law and watching him exercise his brand of justice means seeing it be challenged. There’s eventually a gray area that finds Roman at odds with what he believes in and that turn has a significant effect on where the film goes. Not hurting is the value of Farrell and Ejogo in their supporting roles. While observing his odd behavior, the film is wise to have these other characters never look down on Roman or treat him differently. It’s a responsible tactic for the film, and it only helps add to the stirring drama that amounts from this terrific Washington performance.

If there is an issue, it’s the way Roman J. Israel, Esq. seems happier to paint the canvas than finishing the portrait. While I enjoyed the turns to build this film towards a conclusion, the depth of the film’s themes only seems to matter as much as it means enjoying the character we follow for a couple of hours. Roman’s crusades and purpose are idealistic but not necessarily relevant in a fresh way. The social commentary on display speaks to what has been a standard in regards to the justice system for some time. That means making the film follow a formula, which is fine as far as allowing for crowd-pleasing entertainment, but less daring when it comes to leaving a more substantial impression.

Thematic issues aside here is an adult drama with one of the best A-list actors in Hollywood crafting a wonderfully well-rounded performance. Roman J. Israel, Esq. features a sharp script that finds some interesting ways around standard courtroom drama familiarity, letting the characters breathe in the process. Any signs of shakiness are outdone by an assured grip behind the camera and an always exciting lead in front of the lens.