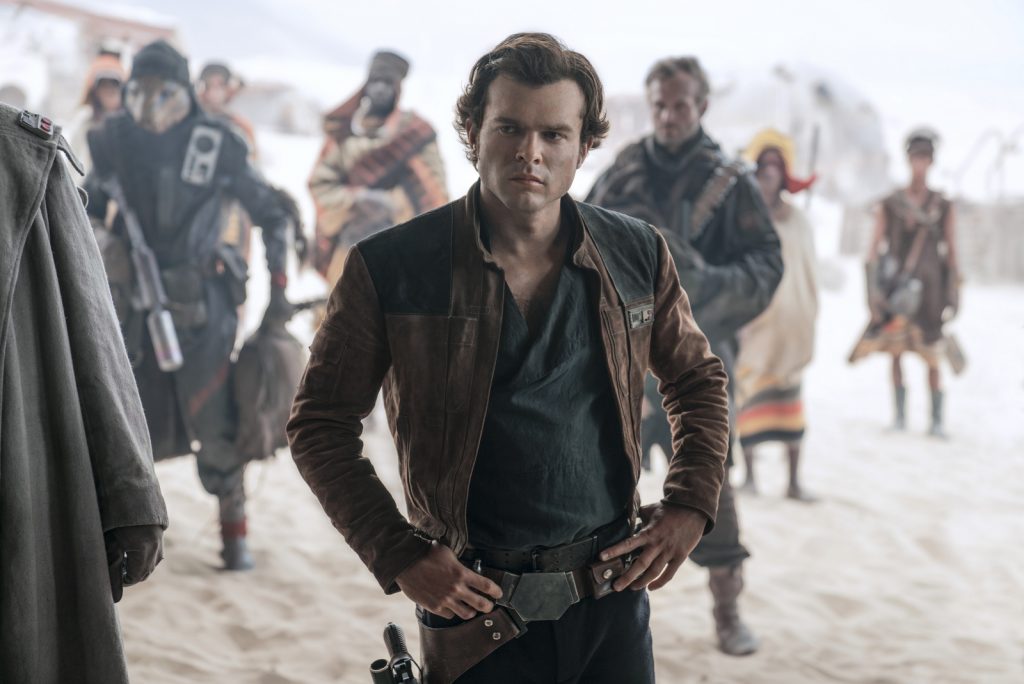 Inevitably there was going to be a time when getting a Star Wars movie every year, since the release of The Force Awakens, would lead to some diminishing returns. That’s not to say Solo: A Star Wars Story is not a fun time at the movie theater. On the contrary, despite any of the troubles behind the scenes that led to the hiring of Ron Howard to take over as director of the film, producer Kathleen Kennedy wasn’t about to have Lucasfilm put out a poor product. Still, following the recent ambitious high that came from The Last Jedi, Solo comes off as a more scruffy-looking and lightweight affair about a few space pirates.

The novelty of a Han Solo movie always felt like the easiest road to take. While fun to break from Skywalker-based episodic films for other stories in the Star Wars universe, it felt like there was only so much to take in from an origin story about one of the most iconic movie characters in cinema history that doesn’t star the actor who made him what he is. To his credit, Alden Ehrenreich does precisely what is needed to deliver a fitting take on a younger Han. It’s just a shame that his risk-taking personality didn’t pair with a story willing to take more chances as well.

As it stands, there’s a decent hero’s journey being sold here. No one will ever be convinced Ehrenreich’s Solo has anything less than a heart of gold, despite his desperation to claim otherwise, but that’s fine given the company he keeps. The story revolves around Han’s journey from a poor scrumrat seeking a way off his homeworld to a crafty scoundrel learning plenty about the scum and villainy that fills out the galaxy. During Han’s journey, he meets Chewbacca (Joonas Suotamo, a tall, Finnish actor with a name fit for its own Star Wars movie). For those who have kept an eye on all the various callbacks to past Star Wars films in these recent entries, establishing the relationship between Han and Chewie is merely the start of Solo’s joy in making frequent references. But why shouldn’t it? 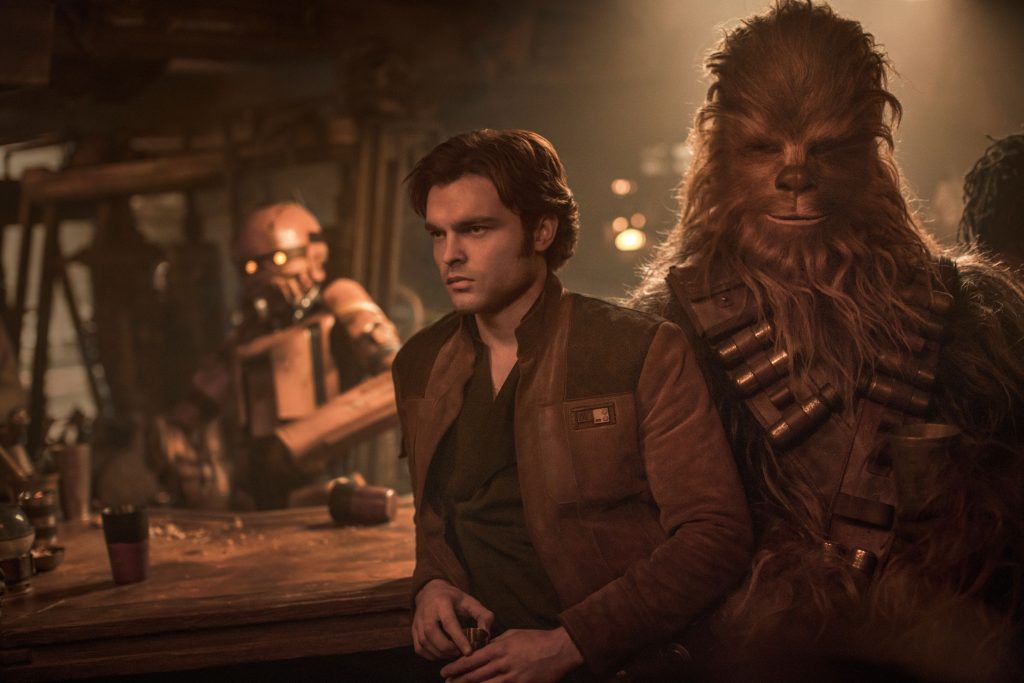 Being a Star Wars film, focused on a fan-favorite character seems like an invitation to dive into familiar territory for the sake of having fun with the things audiences already know about him and the universe he occupies. However, while not an out and out comedy, it does feel like that sort of appeal could be driven into even more. The screenplay by Lawrence and Jonathan Kasdan (ruling the script and galaxy as father and son, I see) may be in favor of harkening back to an old-fashioned adventure story, but it does feel like there’s room to go further in an unfamiliar direction.

Lack of more ambitious choices aside, I suppose that’s why Howard is a fine choice for director, even if he was called in as a replacement. His assured hand allows Solo to stay on track and never let up in the pace. A longtime friend of George Lucas (Howard almost directed one of the prequels) and not unfamiliar to Lucasfilm (he did bring us the medieval fantasy adventure, Willow, back in 1988), Solo does enough to feel like it belongs within this franchise. However, these anthology films do seem to lend themselves to concepts that feel more unconventional.

At this point, it’s not as if the Star Wars brand feels like it is in jeopardy when it comes to the box office. Then again, with such a strong reaction by some fans to The Last Jedi, perhaps not straying too far from the path made sense for a film focused on a character who already has a future we are well aware of. So maybe it’s time to get into what does work and why this film is as enjoyable as a comfortable Star Tour along the beaches of Naboo.

With lower stakes and an already established world, it comes down to the energy of the cast at a lot of times. Fortunately, Solo knows how to deliver. Ehrenreich is solid, as mentioned, but he’s given enough support from Emilia Clarke as Qi’ra and Donald Glover as Lando Calrissian. Clarke has to play a few different layers to play, which works as far as adding more dimension than usual for female characters in Star Wars. Meanwhile, Glover has all the charm needed to play the smoothest man in the galaxy, complete with his own cape collection.

Woody Harrelson feels like he’s been restrained a bit as criminal-for-hire Tobias Beckett, stuck in a fairly standard mentor role, but he only has to do so much to work in an ensemble. A few scenes involving Paul Bettany as crime boss Dryden Vos allow for the sort of scene-chewing fit for a villain with a fancy ship full of decorations and actual food to chew for that matter. Phoebe Waller-Bridge gets to have the most fun as L3-37, Lando’s droid companion who champions the rights of droids to the extent that leads to one of the more exciting ways to set up an action sequence.

As far as the big set pieces go, Solo knows how to deliver the goods. If you wanted to see how good of a pilot Han is and what kinds of nifty tricks he was able to pull off with the Millennium Falcon in his early days, Solo has you covered. This also may be a movie about space pirates, but don’t think Solo isn’t above calling back to westerns either. An early action sequence plays like a group of cowboys jumped from their horses onto a speeding train for a heist. Showdowns set in the sand have a similar feel.

With all of these genre riffs and various parts of space explored, cinematographer Bradford Young (Arrival) has the chance to dig into Star Wars on his terms. There’s a bit too much murkiness at times (and 3D is not the way to see this film), but certain sequences genuinely shine when the film is firing its thrusters at full power. Composer John Powell also has a good hand on the wheel when it comes to emulating the sound of a Star Wars score, complete with backup from John Williams for a new Han Solo theme and some other familiar compositions.

I still wish the film had more going on narratively. It’s not as if I won’t rewatch Solo and likely find more to enjoy, but there was little in the way of surprises this time around. There’s cleverness in some of the presentation, while many moments merely click together as one would expect. As far as further depth to the characters involved or the themes being explored…well nothing’s quite on par with the mystery of the Force. Instead, it’s a fairly predictable journey that delivers on rousing action, while staying inside the lines.

While I wouldn’t say there’s much worry to have over the direction of this franchise, as I did enjoy this film overall (and I’m a big fan of the three Disney-era films that preceded it), I am hopeful the success of an easy conceptual idea for a prequel allows for more experimentation in the future. Whether or not we keep dealing with familiar characters, there’s always room to dig deeper with a series known for pioneering certain aspects of cinema. But hey, the odds were at least mostly in Solo’s favor. 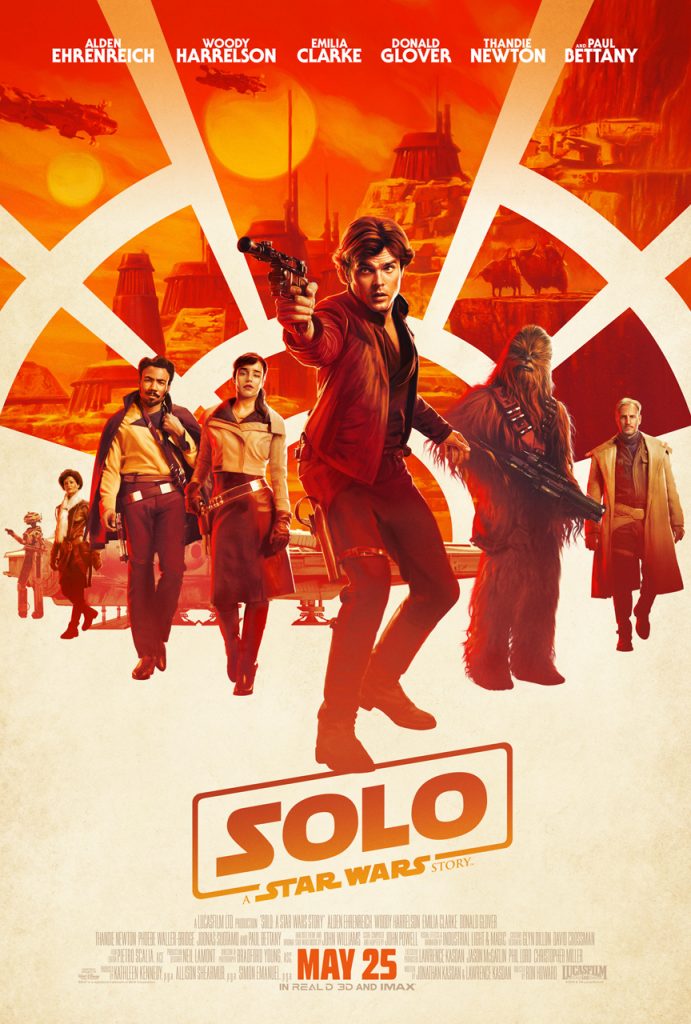