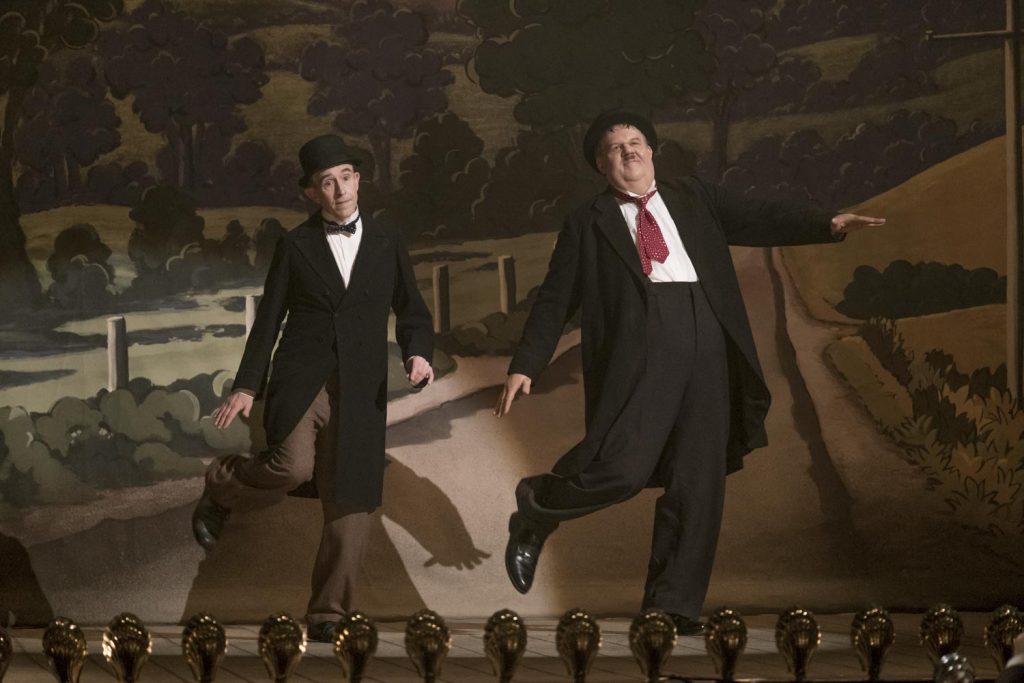 If there’s one thing a good biopic can do, it is help to cement a legacy even further. While there’s a tendency to publish the legend over the truth when it comes to proper representations through dramatizations, artists, politicians, and others who earn a display of themselves in cinematic form can benefit from their image being preserved in film. Stan & Ollie puts a focus on Laurel and Hardy, the famous comedy double act during the early eras of Hollywood cinema. I can’t say how familiar today’s generation may be with the work of these two slapstick comedy pioneers, but here’s a film that is sweet enough to serve as a nice introduction outside their many, easily viewable, short films.

Steve Coogan and John C. Reilly star as Stan Laurel and Oliver Hardy, movie stars and bowler hat enthusiasts. While a prologue provides a setup for who these two were in their heyday, the majority of the film puts focus on the very late period of their career. As time and the rise of other performers took its toll on the two stars, we watch as they go on a comedy tour through the United Kingdom, in hopes of securing funding for one final feature. Between health issues, financial setbacks, and some previous career controversy, we watch as Stan and Ollie have their friendship tested in some very light ways.

I often feel tested when it comes to critiquing the lead performances in a biopic. It’s not as if the performers involved get all the way to the point of the film being made and released, with the mere hope that they did a competent job of representing their subject. When was the last time one of these kinds of performances was deemed bad? DiCaprio in J. Edgar? With that in mind, there’s some real movie magic at work and a lot of minds in the right places when it came to placing Coogan and Reilly as Laurel and Hardy. Both actors do a superb job in their respective roles, bringing an exceptional level of chemistry to their many scenes together, a sense of warmth to these two men in general, and all of the humor you would hope for.

For a film that often trades off delving into more profound drama in favor of light troubles, there is a great benefit in getting that light touch from these two, who can say a lot through their facial expressions and mannerisms. Perhaps that earns the film even more credit, given the popularity of Laurel and Hardy during the silent era of moviemaking, which also required actors to do a lot without the aid of their voice. Director Jon S. Baird certainly seems to be in his element regarding the staging of some low-key segments of the film with underplayed comedy that ends up delivering huge because of its subtlety, let alone a clear understanding of where these two stars were in terms of  popularity at this point in their career.

Still, there are also the bigger and broader comedy moments that go over well thanks to just how imbued with personality this modest production seems to be. Writer Jeff Pope (who co-wrote Philomena with Coogan and scored an Oscar nomination for his troubles) seems to have found the right way to tackle a story of these two classic comedy titans. For all the business on stage that shows off what a great team these two were, the comedy continued in real life as well.

Channeling that concept for this film helps to define what kinds of performers they were. With Hardy, he was an entertainer that held up a nice, polite image, even if he had a gambling problem. For Laurel, everything was about constantly entertaining; maintaining an illusion, not unlike Christian Bale’s Alfred Borden in The Prestige. If there was time to perform a bit for random folks, Laurel was happy to set that stage. Be it routines involving excessive luggage, or coming in and out of the wrong doors, there was always an encouragement to be funny and allow for some well-received attention. 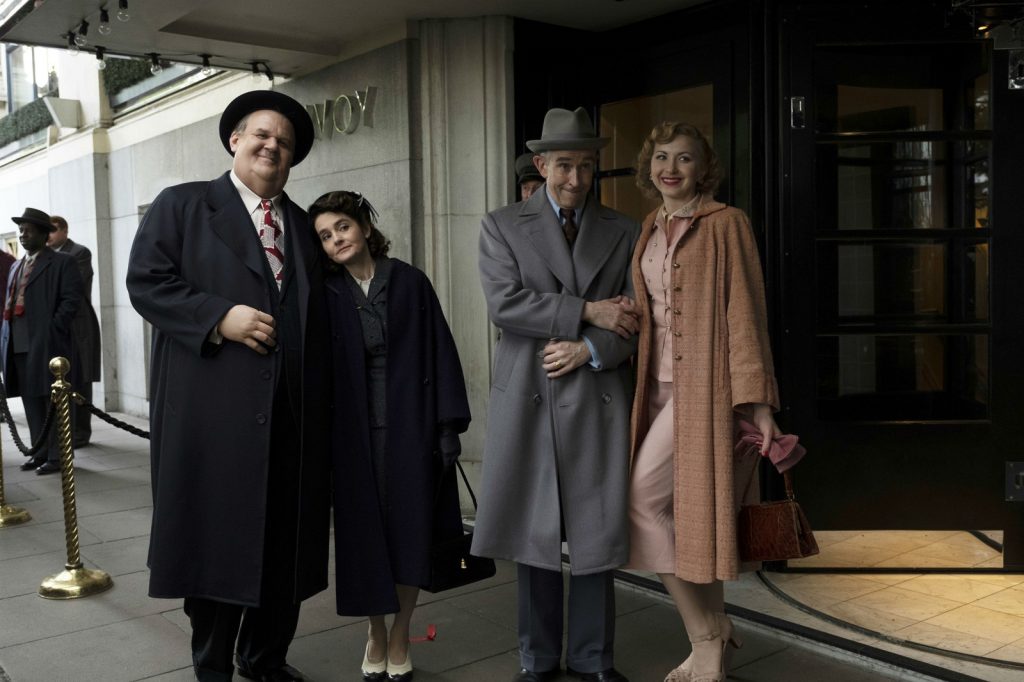 With performances in mind, it should be noted the men have wives who eventually arrive in the UK and add a high level of energy. Shirley Henderson is Lucille Hardy, the concerned wife just hoping her husband is taking care of himself. Nina Arianda is Ida Kitaeva Laurel, a wannabe actress who speaks her mind, even if it means cutting down anyone in her way. There’s a comic timing between the wives that is often as funny as their male counterparts, allowing for two roles that do well with the little involvement they have on the story. Also worth noting is Rufus Jones as Bernard Delfont, the hilariously dry tour manager for Stan and Ollie.

While the film is often amusing and never going too far off being a warm-hearted look at the strong relationship between two friends (and it’s certainly never mean), Stan & Ollie does need to find time for conflict. It’s not necessarily an aspect that needed to be expanded upon or avoided, but you do get the sense that the film had to rely on this to shape a linear narrative around their British tour, as opposed to keeping things fairly episodic. While the drama that arises (which stems from a time Ollie opted to make a feature without Stan due to his studio contract) is resolved fairly simply, it does serve as a credit to how much we like seeing these guys as friends.

A more emotional aspect of the film comes from just how well Reilly sells the older version of Hardy. Fitted with prosthetics to convey the man’s girth, here’s a guy who’s performed for decades and still wants the show to go on. He has very few rude bones in his body and gets along well with everyone. It matters all the more when we see him suffering from health-related issues, making the finale of the film even stronger, as it calls back to something the duo was most famous for.

There are strong moments for both stars to shine, but Stan & Ollie works quite well when it proceeds in an unassuming manner as well. This is quite fitting for two actors who know how to play big but can easily take things down to a smaller level as well. Given the film’s quaint handling of two formerly huge comedy stars dealing with dwindling demand in the twilight of their careers, I was pleased to see a movie that chooses its moments carefully. It makes watching this journey of theirs way out east a fine picture to relax and enjoy like a sap at sea. 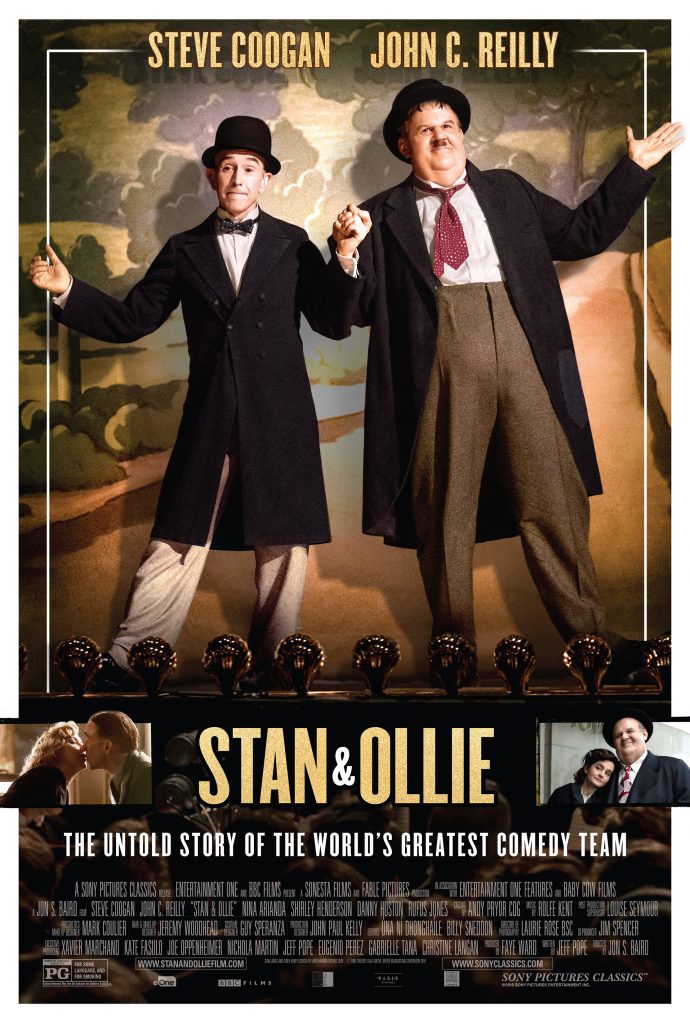