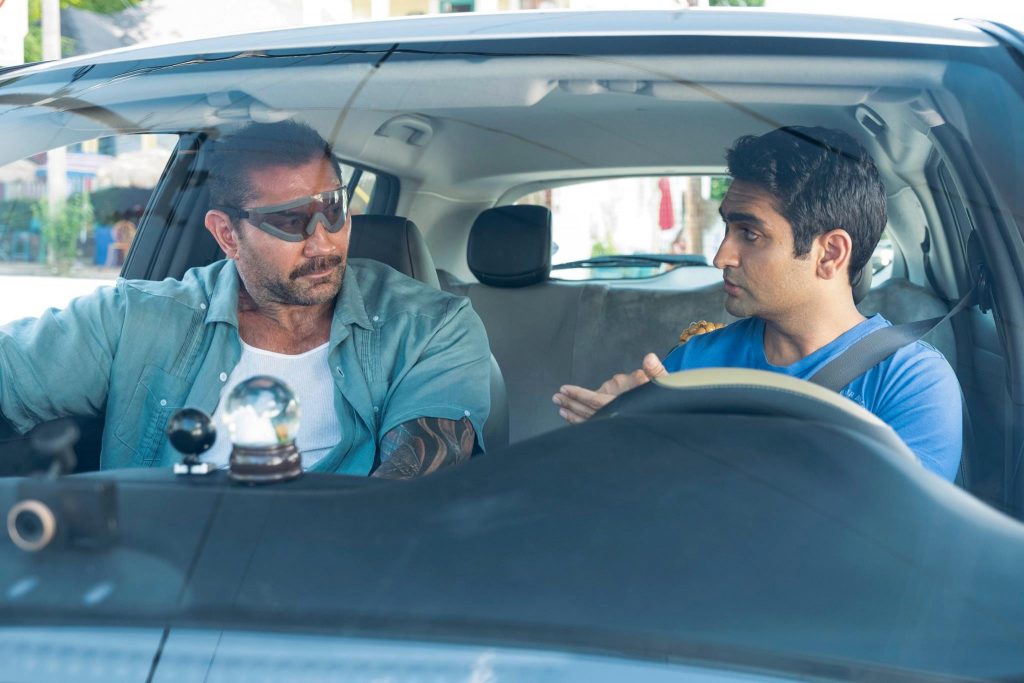 I don’t think I’ll ever get over the novelty of mismatched buddy action comedies, and I’m sure studios know that. Stuber delivers the unlikely pairing of Kumail Nanjiani and Dave Bautista. The idea of them having fun chemistry together is not surprising, as this silly movie wouldn’t have gotten this far if that concept didn’t at least work at that level. What’s even better is how the film chooses to explore that pairing. While Stuber follows every cliché you’d expect (and has some fun with that), it also works as a loose deconstruction of machismo. The story is most undoubtedly dim, sharing territory with the many films of its kind that came before it, but I had a fun time.

You can almost hear the pitch meeting when it comes to the plot. “He’s a mild-mannered Uber driver named Stu (Nanjiani). And Vic (Bautista) is a hard-nosed detective on the trail of a cop-killing drug trafficker (Iko Uwais). These two form an unlikely pairing because, get this! Vic just had laser eye surgery and needs an Uber driver to get him around Los Angeles to hopefully stop a big drug trade and catch the bad guy.” What other wrinkles could be added? Well, Vic has a daughter (Natalie Morales) he doesn’t spend enough time with. Meanwhile, Betty Gilpin plays Becca, the woman Stu has been in love with forever but has been too afraid to tell her. Let the action ensue!

The biggest hurdle to climb with Stuber is accepting the premise. You need to buy into the idea that Bautista’s Vic is so stubborn (and pretty dense, despite being a good cop) that he would willfully keep himself paired up with his Uber driver, despite how ineffective Stu is, let alone a complete civilian. Yes, adding the wrinkle that Vic is temporarily blind allows the film to become the most action-packed episode of Mr. Magoo I’ve seen, but that’s quite the excuse to have this premise hold together. Regardless, it’s not as if Stuber is attempting to work as a grounded action-comedy, which is where relying on this team-up to deliver matters most. 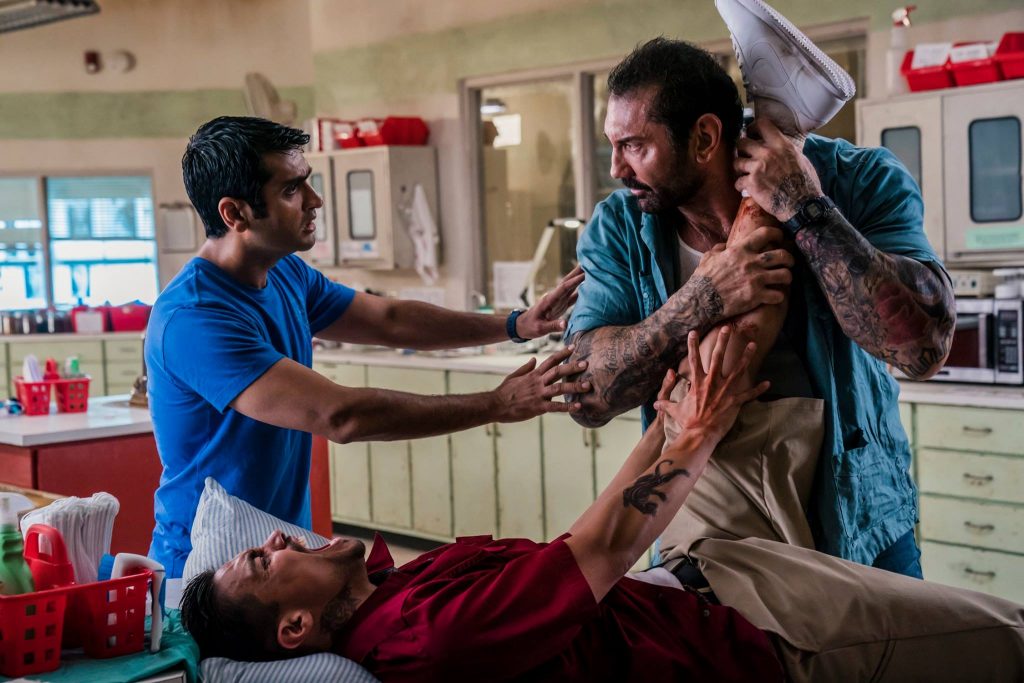 So yes, after ten minutes setting up the basics of who these guys are, we get Bautista acting as the angry cop shouting at Nanjiani about where to go, since Vic doesn’t understand how Uber works. The best thing about these two together is the gradual build up in frustration on Stu’s part. Vic stays the same, blending his tough, deadpan attitude with constant physical comedy due to his blindness, while Stu becomes more and more exasperated, whether it’s from feeling kidnapped or seeing dead bodies pile up during shootouts. There’s not much in the way of nuance here, with characters reacting based on a given scene, rather than a totality of what they experience, but it’s continuously funny.

Again, Stuber isn’t doing much new in regards to buddy cop comedies. Even the personal drama stuff is about as half-baked as it gets. Stu’s, in particular, feels like a relic (he’s hoping to get out of his dilemma in time so he can sleep with Becca…). However, it does build to another ridiculous scene that tries to examine some core roots of the genre involving masculinity. Of course, it has to be wrapped around an extended fight between Stu and Vic, but that’s the tricky line the film walks in being outrageous as well as open-minded enough to have something, anything, to say.

But not everyone is looking for that. Stuber isn’t out to change the world, as the larger concern is about enjoying Nanjiani and Bautista going big with their stock characters roles and making the audience laugh. Mileage may vary, but I thought it delivered. 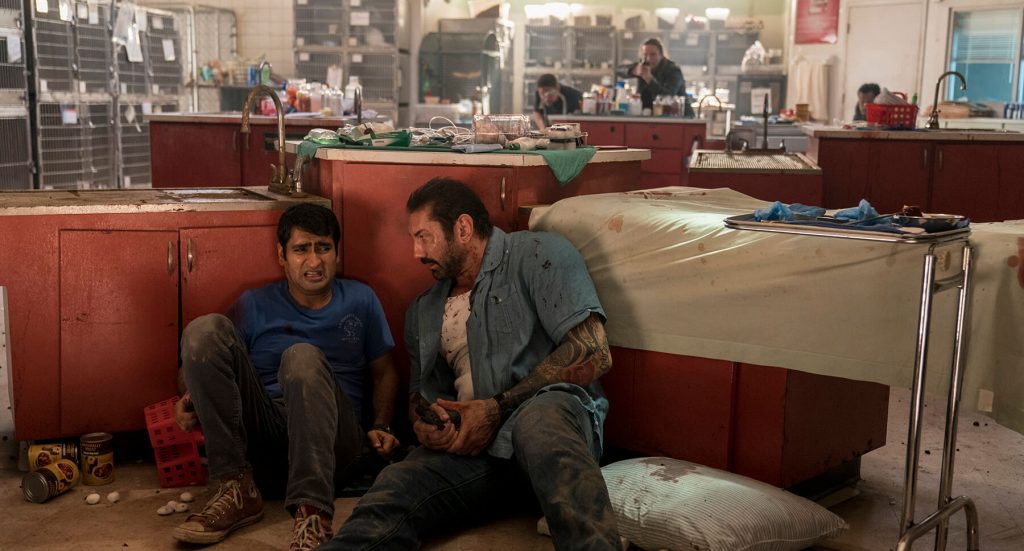 The film also worked well enough as an action flick. Michael Dowse is no stranger to fight scenes (he directed the hockey comedy Goon, one of the best sports movies of the past couple of decades), and with Stuber, he doesn’t shy away from some brutal executions. No, blaring Joseph Trapanese’s score on the soundtrack, with shaky cam close-ups doesn’t always allow for the best framing. That said, I was more impressed with how Dowse captured The Raid’s Iko Uwais here than action filmmaker Peter Berg was able to in Uwais’ previous big American studio film, Mile 22, which is saying something.

Additionally, as far as corporate-based running gags go, the Uber jokes are fine. The film positions Bautista as a good (and violent) cop, while also being a caveman when it comes to technology, but I can get past that thanks to Stu’s side of things. His desperation to maintain a rating above four stars is humorous, as are the other little nods to this line of work. It’s sitcom-level humor, but it fits the tone of the film.

Stuber is a fun ride while it lasts. At a tight 90 minutes, you get enough of what’s needed, whether it’s having the chance to see Nanjiani as the co-lead in a film of this kind, or enjoying Bautista continue to engage on a comedic level, albeit differently than with his Guardians of the Galaxy persona. There’s not enough going on to make this a great sendup of comedies of this type, but the comedy works and the action is sufficient. That deserves at least a decent customer service rating before your next ride arrives. 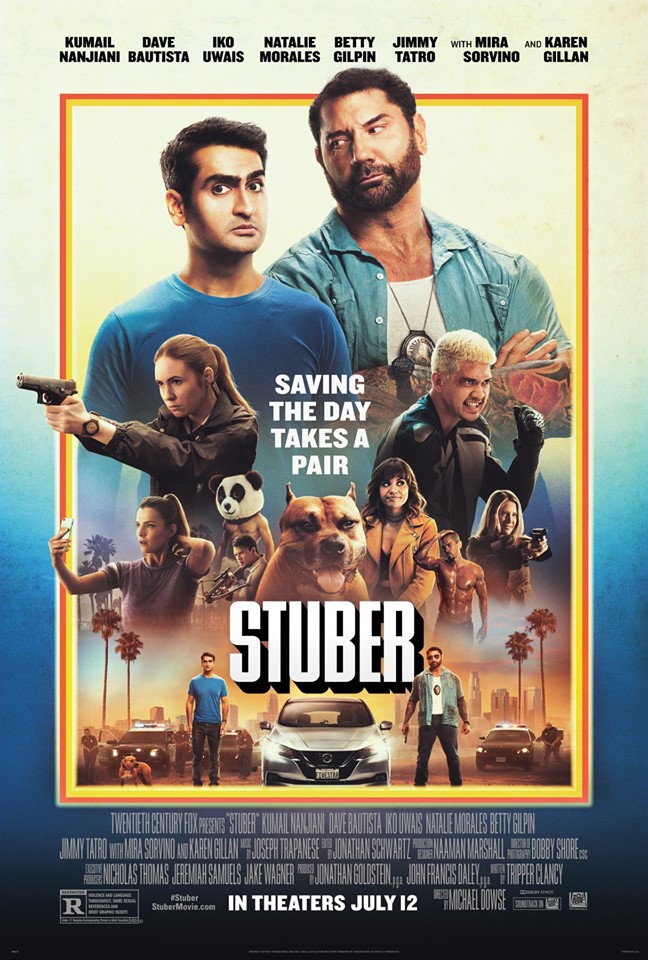 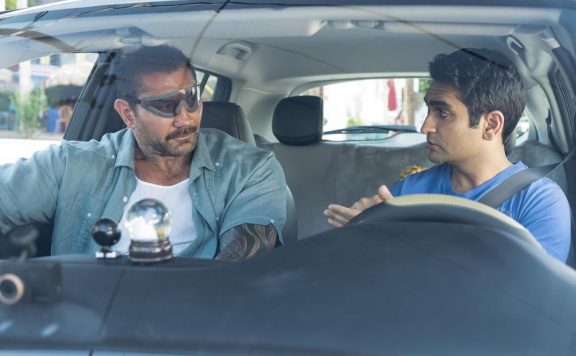