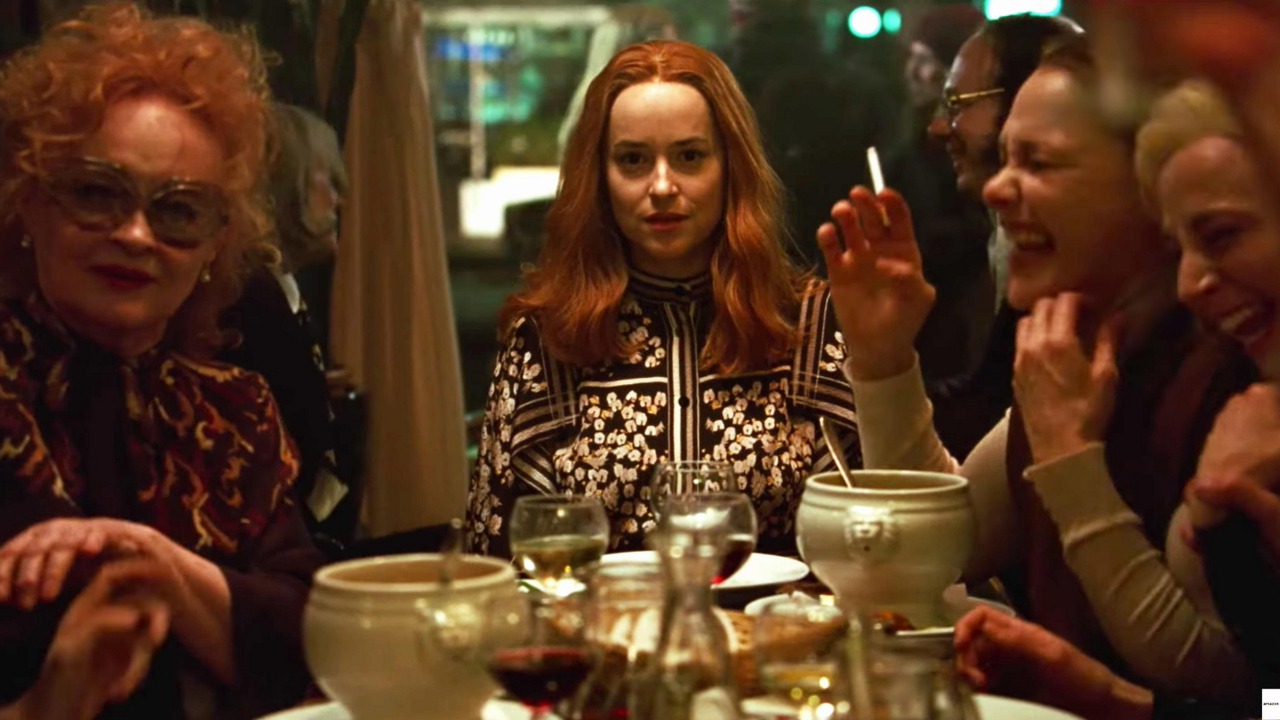 Around the time last year, director Luca Guadagnino aroused our cinematic pleasure with a poignant summer romance in Call Me by Your Name. Purposefully crafted like a mesmerizing art piece, the 1983 coming-of-age film matured into a leisurely, yet immersive experience. With his latest film Suspiria, Guadagnino masterfully applies a similar concept, delving into what can certainly be called 2018’s beautiful nightmare.

Inspired by Dario Argento’s 1977 cult classic, Guadagnino’s Suspiria retains many of the original characters and plot points. While the 1977 and 2018 may share the same name, Guadagnino devises his film with its own disturbing identity. In 1977 West Berlin, a sheltered Suzie Bannion (Dakota Johnson) arrives at the renown Markos Dance Academy. Exceptionally skilled, Suzie is quickly taken under the wing of lead choreographer, Madame Blanc (Tilda Swinton). Suzie embraces the rigorous ballet routines, spellbound by Blanc’s hypnotic and demanding movesets. While the Markos Academy delivers the very best ballet has to offer in Germany, there’s this unexplained sinister ambience within the walls.

Before Suzie’s arrival, a distraught young dancer (Chloe Grace Moretz) seeks help from her psychotherapist, Dr. Klemperer (yes, also Swinton under all the makeup). Clearly disturbed, young Patricia claims that the Markos Academy is controlled by a coven of witches who wanted to get inside her. For the purpose of Suspiria, that’s the expected imagery throughout. Patricia’s disappearance and uneasiness from fellow dancers throws the academy through very difficult times. Klemperer takes it upon himself to investigate Patricia’s claims, while plagued by guilt of his wife’s potential demise during World War II.

Admittedly, Suspiria is not for the faint of heart. Guadagnino takes no prisoners with the amount of intense gore and disturbing imagery interspersed throughout the film. Earlier films in 2018 may have been classified as the “scariest film in years.” Bones crack, heads turns and buckets of blood are spilled under the most disturbing of circumstances. Yes, Suspiria runs laps around those pretenders, leaving audiences speechless by the time the credits roll. Whether you like it or not, those images are burned into your mind. Though, it’s art coming to life on a leisurely-developed canvas like Guadagnino’s previous film.

The screenplay by David Kajganich offers much to unpack for its viewers, demanding multiple viewings. At 152 minutes, almost an hour longer than 1977 film, there’ll be plenty to invest in with Suspiria. Beneath the graphic nature, scenes flourish with symbolism and metaphors, just dying to be dissected. Suspense brews at every turn, both visually and narratively. Guadagnino reteams with Call Me by Your Name cinematographer, Sayombhu Mukdeeprom, presenting the film in a bleak, wintry atmosphere. That’s in contrast to Argento’s film, consumed by a striking color palette. The unsettling and paralyzed vibes of a Cold War Berlin are evident throughout as hope feels out of reach. The score by Radiohead’s Thom Yorke excels with nuanced creepiness. There’s just something about Suspiria that seizes your very being and you simply allow it without opposition.

Performances are nothing short of stellar in Suspiria. Dakota Johnson is the best she’s ever been as the fresh lead dancer. Like Kristen Stewart and Robert Pattinson before, Johnson has shed a lackluster franchise, offering unexpected potential in the main role. Props go to preparing nearly two years for those dance sequences. Graced by such evocative choreography, her intense performance is as ritualistic as it is beautiful. Swinton is to be equally commended as the film’s triple threat. Each of her three roles is drastically different from the other. As Madame Blanc, she’s a demanding mentor, yet maternal is a warped interpretation. As Klemperer, her performance invokes a more sympathetic approach as we endure with this lost, broken old man trying to do right. The final role is best left for surprise.

For a second straight year, Guadagnino strikes again with one of the year’s most unforgettable films. Bold, ballsy and practically bonkers, Suspiria is here for audiences to be absolutely terrified of, yet admire. Just try keeping the lights off after this one.