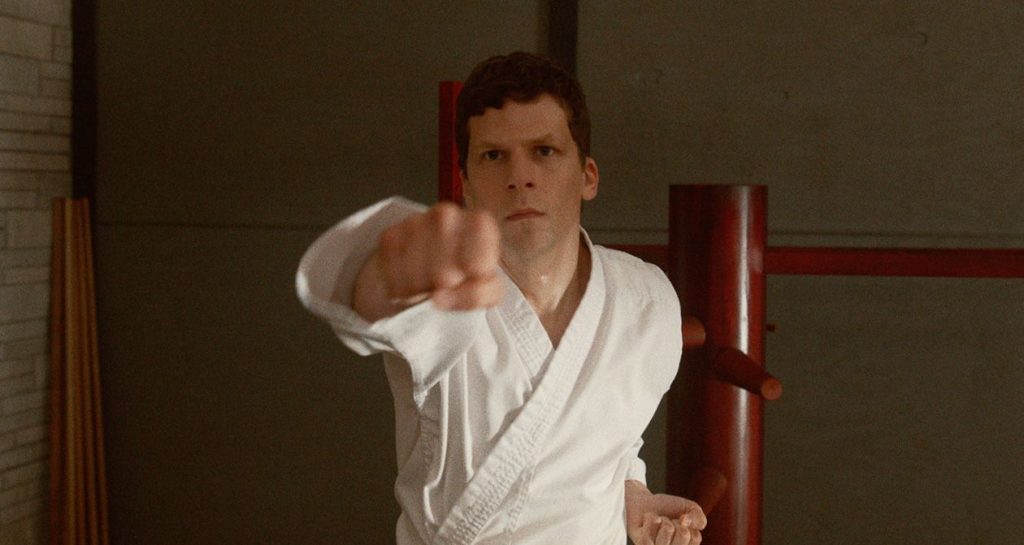 It’s important to note the difference between the measured martial art of karate and the hyper-masculinity that fuels The Art of Self-Defense to a dangerous degree. At the same time, it’s never not funny to hear that a punch needs to feel like a kick. Director/writer Riley Stearns’ offbeat comedy operates in such a deadpan manner that I can only wish the people who function like these characters in real life would wake up to their own reality after witnessing what’s on display here. As it stands, The Art of Self-Defense may not be striving to detail some solution to the way toxicity can override goodwill, but it’s disturbingly funny in a good way.

Jesse Eisenberg stars as Casey, a mild-mannered accountant who decides to take up karate, after being beaten up by a motorcycle gang. Upon entering the dojo, Casey meets the Sensei played with perfect offbeat charm by Alessandro Nivola. Imogen Poots also stars as Anna, one of Sensei’s most-skilled pupils who is deliberately held back because she is a woman. As Casey finds himself adapting quickly to the drive to become a better student of karate, he also discovers just how dangerous a world he has entered into.

The tone and style of The Art of Self-Defense are heightened in a particular way. Characters speak in an affected manner that is both emotionless yet quite pointed. It brings to mind the monotone yet naturalistic style offered up in Yorgos Lanthimos’ The Lobster or The Killing of a Sacred Deer. This is important to note, as the film takes a very literal approach to who these people are and what they are saying. There’s very little subtext as far as what Sensei and most of the men believe karate stands for. 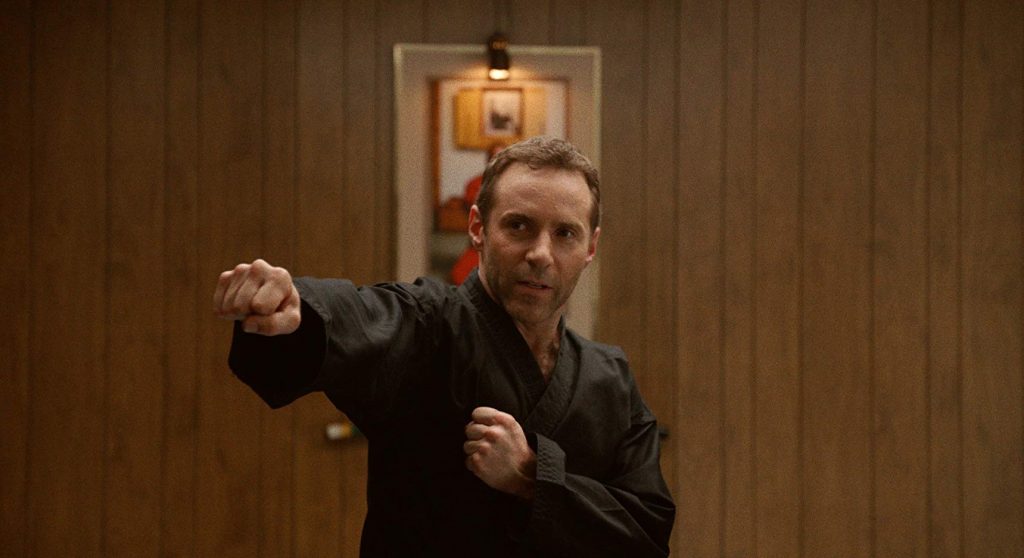 By making this choice, it perhaps removes any sense of nuance but also allows the actors to dig into their outwardly shallow-minded characters. It’s what makes the film funny, even in the face of ridiculous and sometimes disturbing things. With Sensei going out of his way to embolden the weak-minded, we get a film that shows the real ramifications of a world driven by ego, testosterone, and bullying. That should not be inherently humorous, and yet Stearns has guided his actors away from being a pure caricature to allow for a sense of tragedy to lurk underneath its sinister exterior.

Key to this is casting Eisenberg as the lead. The nebbish persona he has excelled at with certain performances is put into overdrive here thanks to the stylized nature of the world around him. His detailed mannerisms let him continually sit as socially awkward, even in environments that are already quite off-putting. At the same time, we can learn enough about who he is to understand how his role in this film can lead to upsetting the rhythm established by Sensei and his karate classes.

Nivola is similarly crucial to the film’s success, banking off his leading man image wrapped around the character actor attributes that have made him a reliable supporting player in many films. Operating as a literal-minded Mephisto, the take on Sensei has him understandably seeming like one you could learn from, in spite of how silly he can present things as. 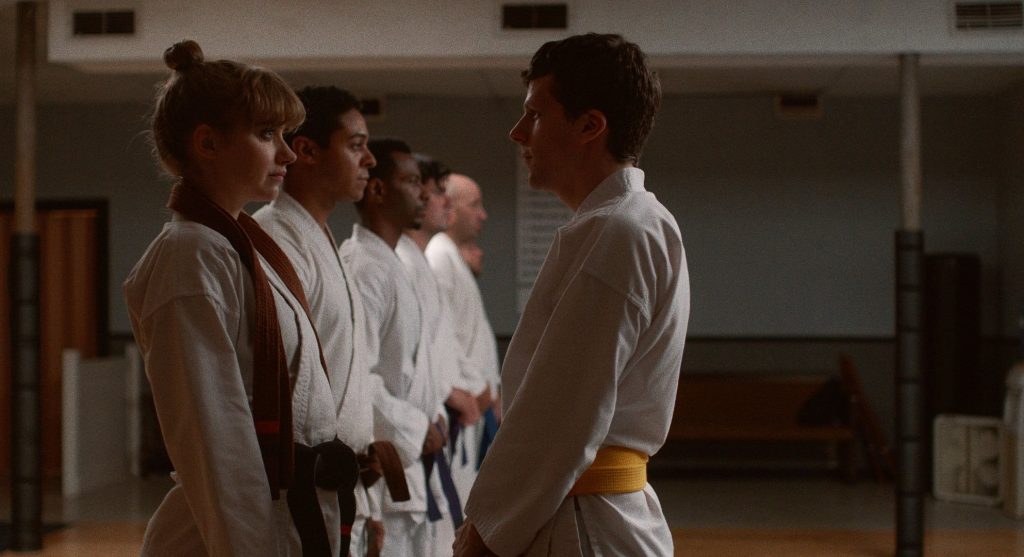 It is here that I once again note that karate is not supposed to be practiced in any way resembling what Nivola’s character says, and yet his acrostic advertisement of karate as “Kicks, Artform, Real, Anti-Abduction, Try it, Everyone” is hilarious. Even better is the way he grapples with Casey’s meek nature as a means to teach something to someone like him, yet also realize how helpful it would be to have him manage the books of the karate class company.

Poots’ role as Anna is essential as well, as her status as the only female karate class participant allows the audience to see what Stearns is getting at in an even more explicit manner. The absurdist nature of the karate class and its participants means watching just how brutal a toll the emotions can take on those unleashing fighting moves on one another, and Anna’s frustration is clear. And yet, by adding her character, the movie can help show how modern-day masculinity effects and infects many. 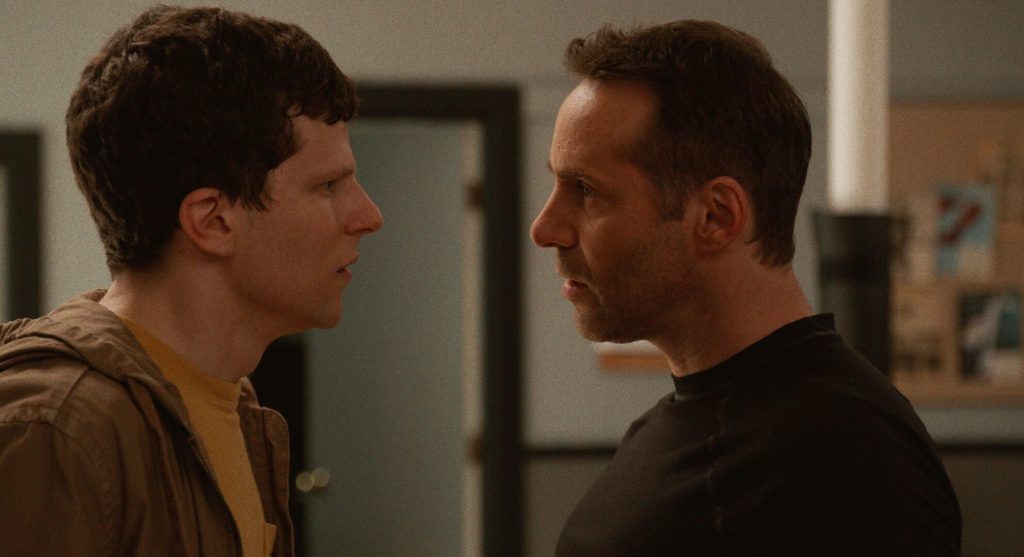 Moving at a pace that keeps the humor coming, even in the face of more unnerving activities, The Art of Self-Defense doesn’t quite have the greatest lock on balancing its story. It wants to move back and forth thanks to the tone of the characters, but since the humor is designed to deliver on shock value and some giggles, making a definitive stance any clearer than what seems so apparent holds it back from being a more critical screed on today’s culture.

However, there is a lot to like here. The performances are top-notch, and the humor has its share of wit. As a satire, while far from subtle, it allows for an engaging dark comedy not short on memorable moments. There may be a little pushback on how strong a message it sends, but the humor still kicks things up a notch. 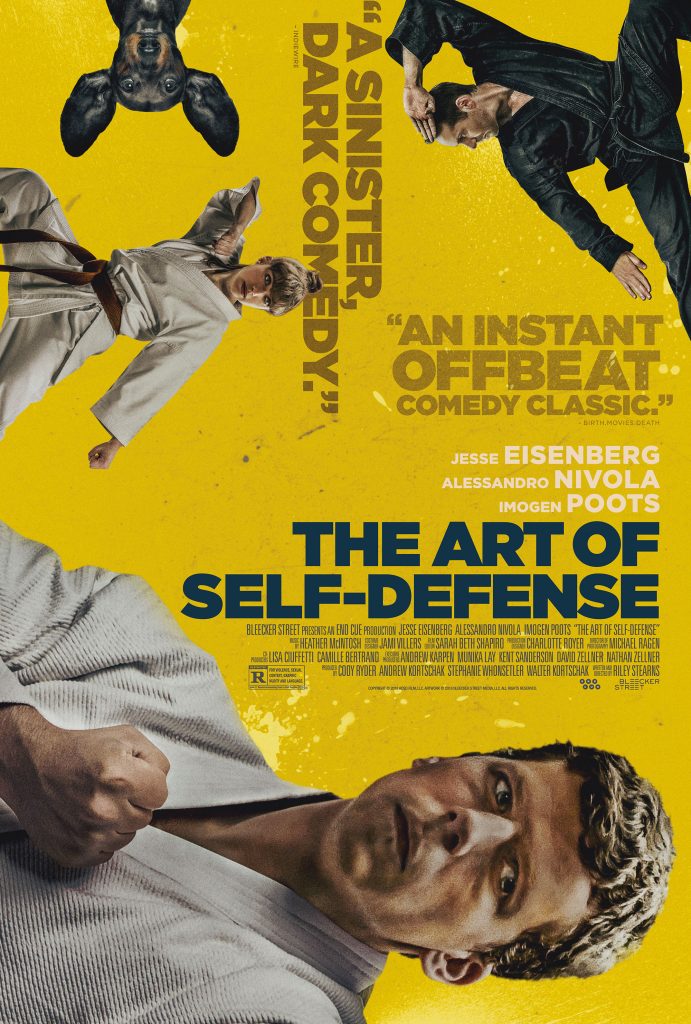