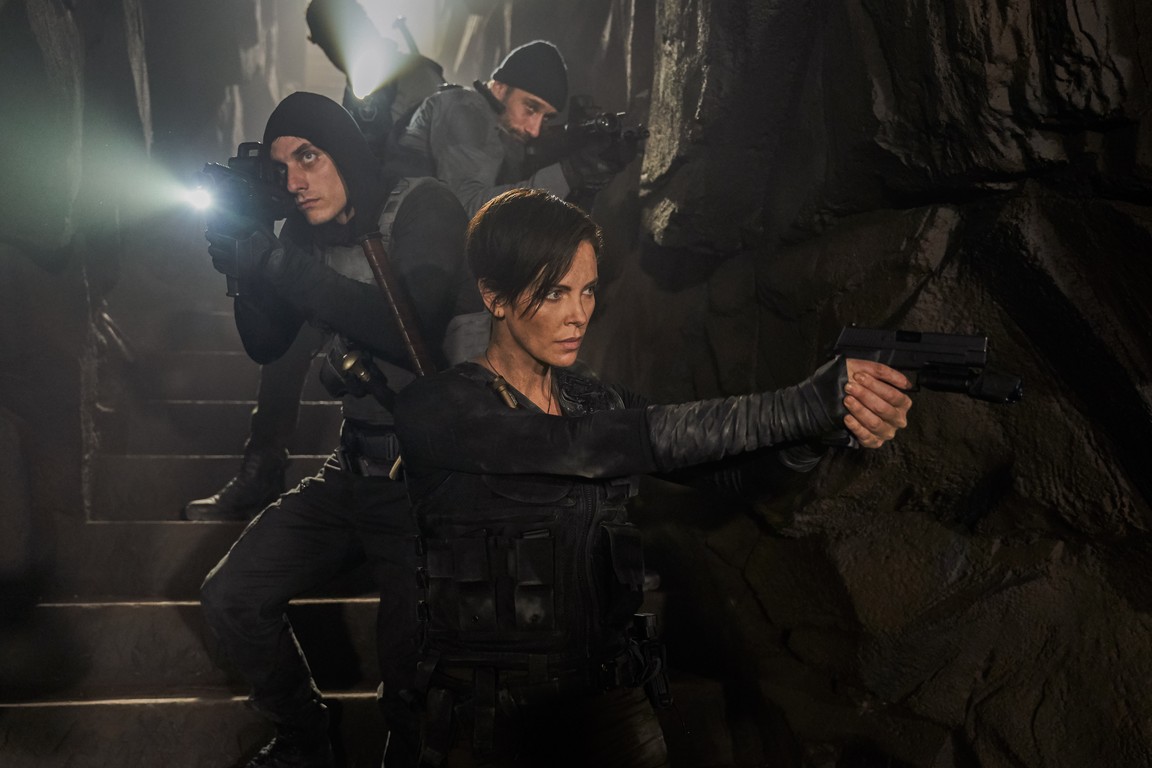 For a superhero comic book movie outside the realm of Marvel and DC, it has to make an impression to stand up to those well-funded franchises. The Old Guard may not establish new standards of storytelling, but its conceit of immortal mercenaries is handled with enough awareness where the sense of intelligence and introspection rings true throughout. Not hurting are the plentiful actions sequences free from the bounds of a regular studio, while still understanding how to portray comic book-level violence. Perhaps best of all, the film knows how to build to the point of a follow-up feeling welcome.

Set in the present, Charlize Theron’s Andy (or Andromache of Scythia, if you want to be formal) is the leader of a pack of mercenaries who are all centuries-old immortals who can heal from anything that hits them. They live in secret but have spent their time fighting for what they believe is right. Still, seeing all this time play out with humanity not getting any better, the weariness is settling in. However, at the same time, they discover a new immortal (KiKi Layne) to join their ranks, a threat emerges looking to capture these beings and find a way to replicate their power.

Writer Greg Rucka, also responsible for the original graphic novel with artist Leandro Fernandez, is seemingly aware of the disconnect most audiences may have with this story compared to the more popular superhero books out there and lays the foundation needed to establish this world. Yes, there are more rules regarding these beings, but the film never feels bogged down by it. At the same time, there’s almost a clear disinterest in the bad guy plotting that involves a rich white guy (Harry Melling) seeking more power to stroke his ego, in addition to some familiar twists along the way. 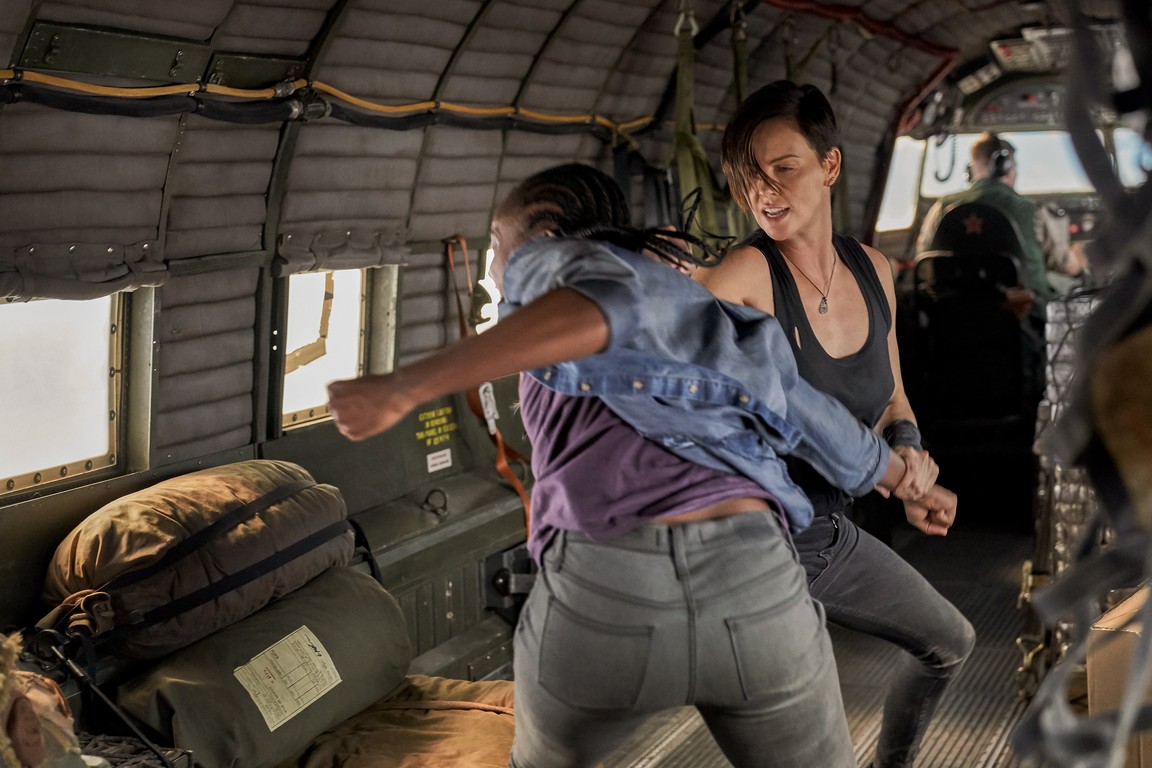 While the familiar plotting is right there to keep things moving, Rucka and director Gina Prince-Bythewood do better by the characters. Even with Layne functioning as the newbie, having exposition delivered to an audience surrogate doesn’t feel like it’s dragging down the intrigue of the film. We need to understand how everything works, but there’s also a lived-in feeling with the characters. Compared to another Netflix film about a pack of mercenaries that can do pretty much anything, The Old Guard may not have the excessive style Michael Bay naturally brings to 6 Underground, but having me enjoy hanging out with these characters goes a long way.

I feel like any of these superhero reviews always has me bogged down in the character and sociopolitical dynamics or whatever other areas of commentary the film may be going for before I get to commenting on the action, but I do find the former to be the lynchpin in these films. As it stands, while there’s a cool factor that comes with Andy and her crew wielding both guns and medieval weapons to take down faceless bad guys, it’s the attitude they put into it, as well as the stuff around it that makes it matter. But, yes, while it’s no Extraction in terms of the camera and stunt work on display (despite being a forgettable action movie), The Old Guard does deliver some pretty killer firefights and acrobatics in terms of visuals.

Fortunately, Prince-Bythewood (best known for Love & Basketball, but also one with some superhero experience), does know how to have a film dig into character, even if it is supplanting more in-depth plot exploration. With that angle, Theron has the attitude of a grandma tired of it all, and best not disturbed. Layne plays up the wonder of being able to be killed and then come back to life, no matter how brutally. 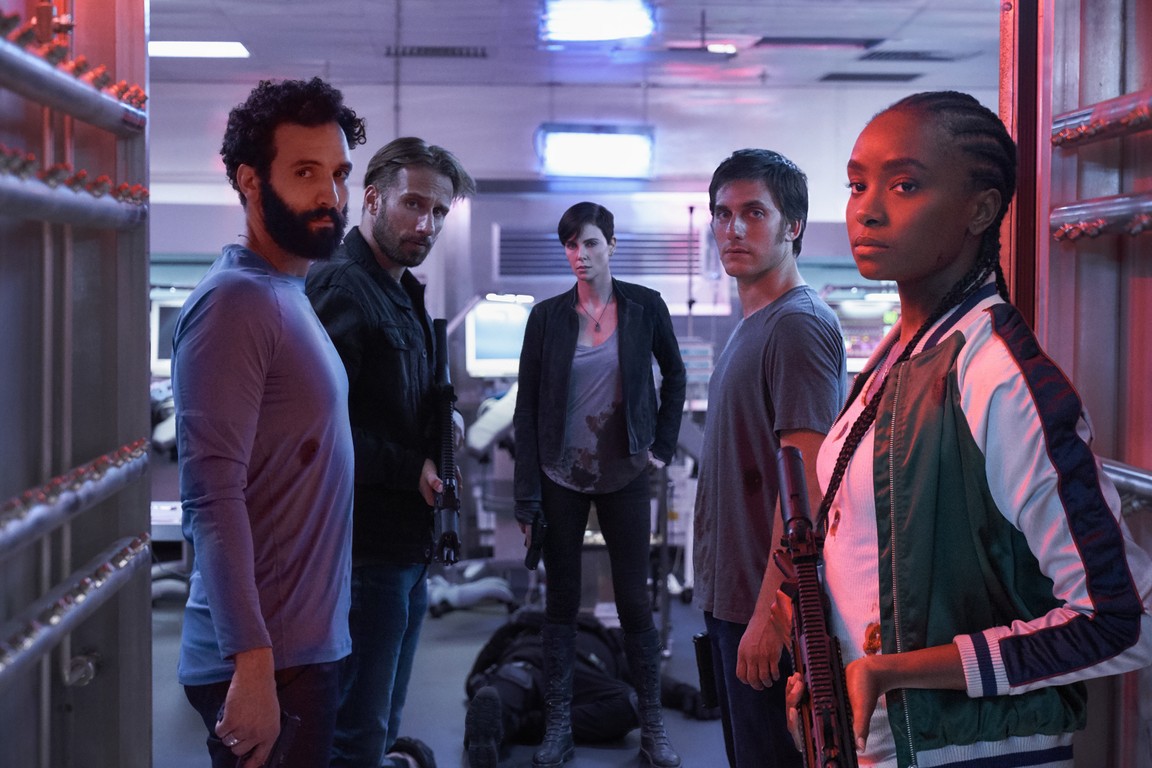 What the other characters lack in deep exploration, they make up for in presence. Matthias Schoenaerts has been reliable on screen and remains the same here as a second-in-command. Luca Marinelli and Marwan Kenzari are fun as lovers who can joke around as well as display pathos in a given moment. Kenzari, in particular, has a monologue defining his relationship that’s pretty wonderful, even as he sits riddled with bullets amongst macho commandos.

Chiwetel Ejiofor also pops up in a tricky role that could have a standard quality in other films, but in The Old Guard, you have an actor plenty adept at making an understated performance feel far more valuable than it could in a lesser picture. He’s also an example of what these films have been doing right – getting good actors to bring the dialogue and levels of nuance to life. It’s why this film works – the characters, despite mostly being immortal beings, feel relatable. 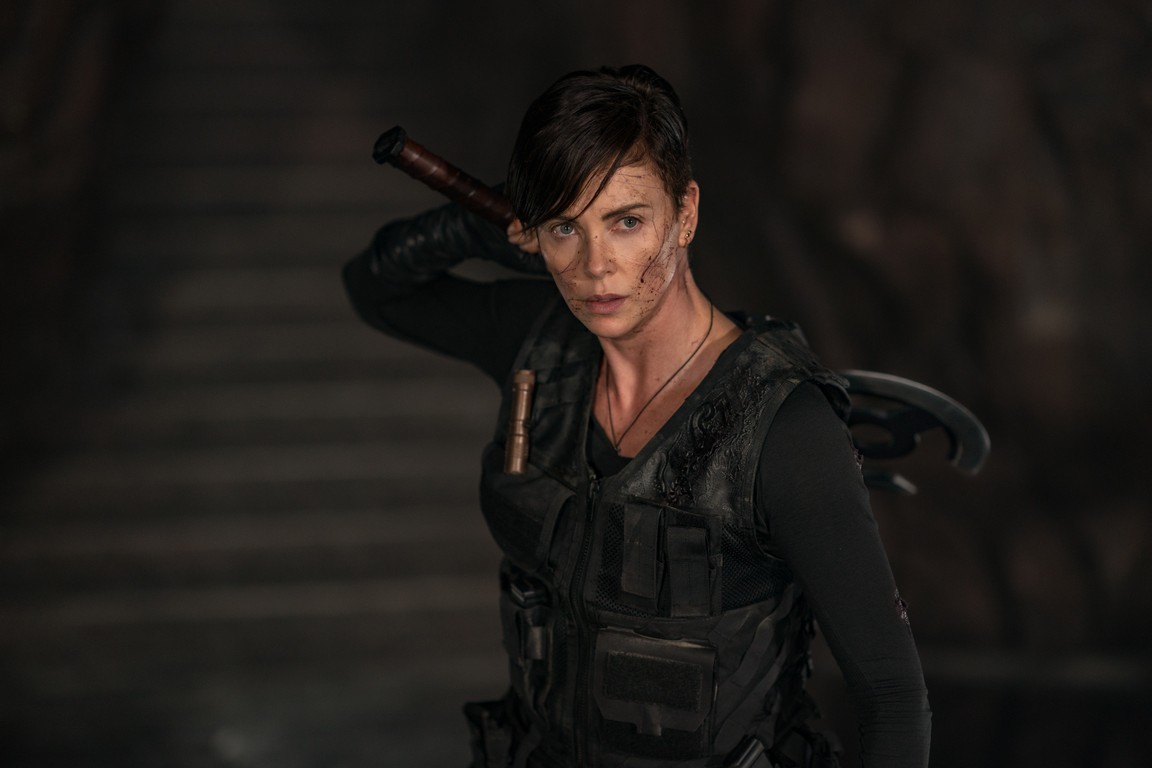 Being a film establishing these characters for the first time, yes, there’s an aspect of seeing a feature-length introduction to what comes next in a possible sequel. The Old Guard gets around this by being both entertaining and quite well written (it also tells a singular story). It doesn’t overcome every issue that could be leveled its way, but many of the proper choices were made in delivering a possible superhero franchise for Netflix, as well as a film providing some satisfying Summer movie spectacle that’s been lacking from 2020 for obvious reasons.

The Old Guard may be running alongside other superhero stories at a familiar level, but it delivers on the inner-workings as far as what makes these characters stand out. Exploring what it means to be human by way of people dealing with the fact that they can’t die makes for an intriguing set up. That it is handled with bullets, battle axes, and bruises that heal quickly makes for a fun jolt of action coming at audiences the right way. The confidence in how it is put on display, what music to use, and what relationships to lean on keep it fresh. That’s enough for the film to stand up to any shots coming its way. 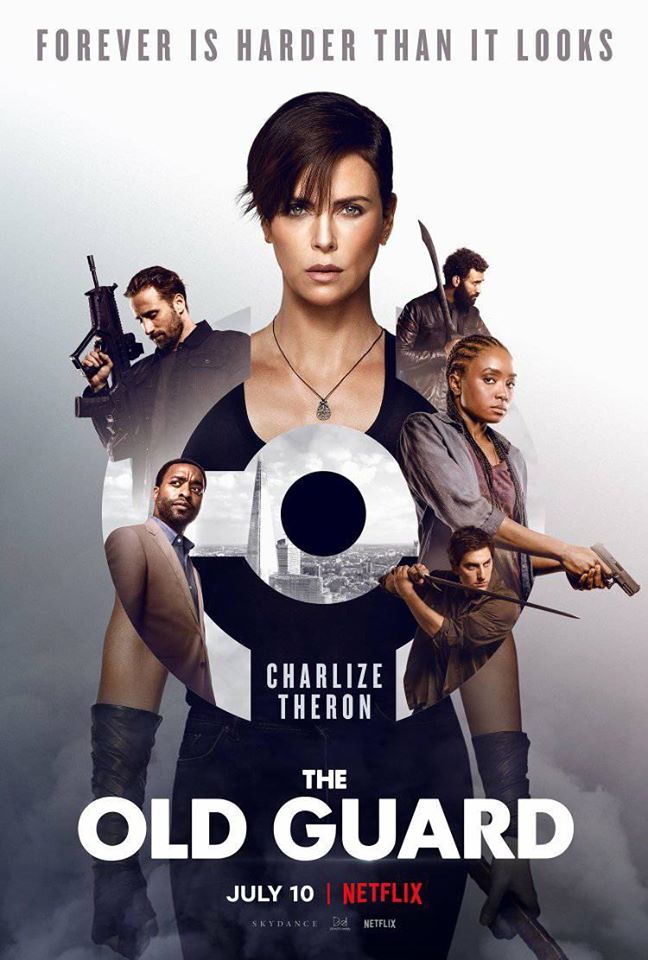 For a superhero comic book movie outside the realm of Marvel and DC, it has to make an impression to stand up to those well-funded franchises. The Old Guard may not establish new standards of storytelling, but its conceit of immortal merc...
0
Average User Rating
0 votes
Please sign in to rate.
Cast:Charlize Theron, Chiwetel Ejiofor, Harry Melling, KiKi Layne, Luca Marinelli, MARWAN KENZARI, Matthias Schoenaerts
Director(s):Gina Prince-Bythewood
Writer(s):Greg Rucka
Genre:Action, Comic Book, Superhero
Studio(s):Netflix
MPAA Rating:R