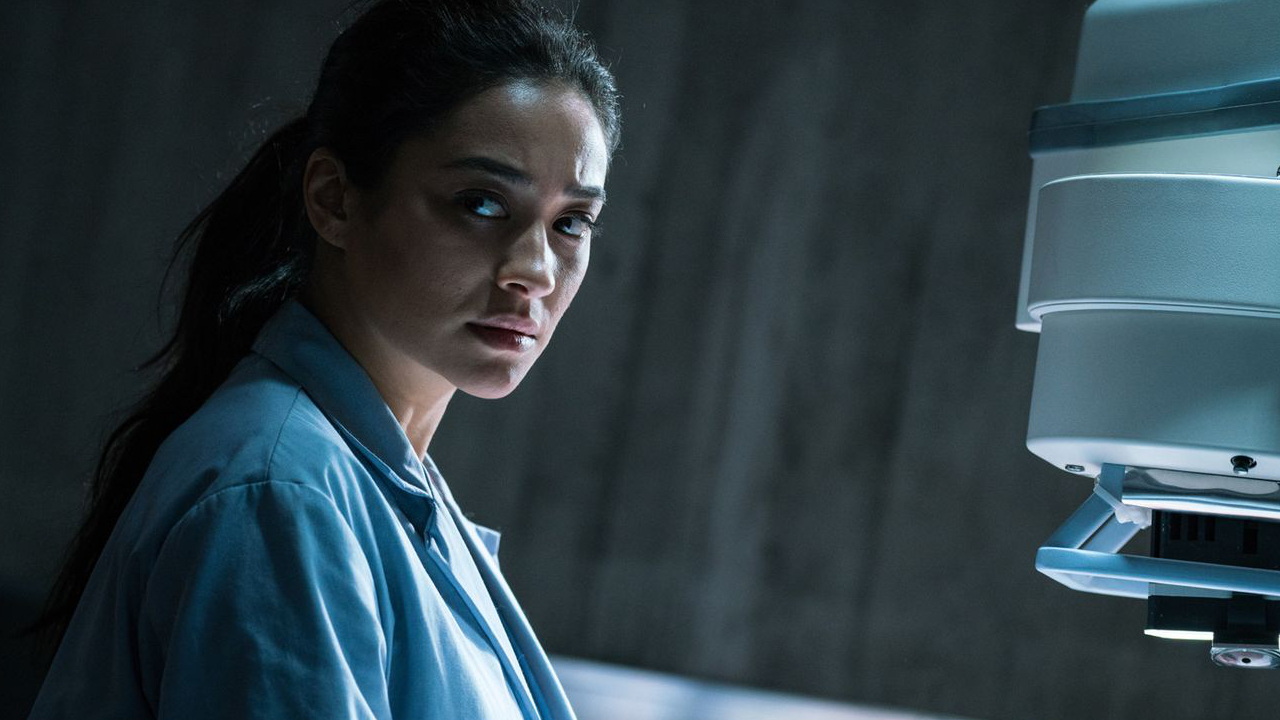 There’s No Life Found in ‘The Possession of Hannah Grace’

Typically between Thanksgiving and Christmas, there’s a dead spell every year where horrors or thrillers can squeeze into. This year, we get The Possession of Hannah Grace. Dully uninspired, its formulaic title frames the supernatural horror as nothing more than your run-of-the-mill exorcism film. To much surprise however, there’s no build-up to the actual possession, dropping the hook within minutes. Perhaps the slightly misleading title was pulled out of a hat?

As the title suggest, young Hannah Grace (Kirby Johnson) is tormented by a malevolent demon. Between the demonic voice, contorted body and alteration of eye color (okay?), the demon has full control over the girl. Her father Grainger (Louis Herthum) attempts one last chance to save his daughter. Unchanged circumstances force him to take his daughter’s life. The body shows up at the local morgue, where troubled ex-cop Megan (Shay Mitchell) works the graveyard shift, processing the corpses. With Hannah Grace dropped off at her doorstep, we can only assume that things are going to go bump in the night.

Megan has difficulty adjusting professions, shaken by a traumatic incident in the line of fire. She’s about as dead as the corpse she looks after, attempting to claw her way from drug addiction. We’ll have to give her credit for at least trying, even if that means overnight solitude. On her first night, Megan’s hardly enthusiastic with the new job as she’s provided the rudimentary instructions of processing. “Green means go.” She probably should have wished that handling every cadaver would trigger a tedious green light. But not when it comes to the body of Hannah Grace. No, that would be too easy to neatly wrap up. It’s not much depth for the Pretty Little Liars star, but she is adequate in the lead.

SEE ALSO: The Autopsy of Jane Doe Review: Smart and Scary as Advertised

The Possession of Hannah Grace is hardly the type of horror that leaves you in the fetal position in the theater. Yes, weird things happen at the morgue in the middle of the night. But the film meanders for 85 minutes rather than terrifies. Doors randomly swing open and rubber band balls miraculously roll themselves under a bathroom stall. Even the cold and solitary atmosphere of the morgue is devoid of any emotion.  For being a place littered with corpses, this would be a walk in the park for the most frightened of people. Hannah’s twitching and crawling on all fours offers more chuckles than frights. Megan isn’t full of dread and neither should we for a single second.

Screenwriter Brian Sieve drops in a few faces throughout the morgue. We have security guard Dave (Max McNamara) awkwardly flirting with Megan as well as fellow nurse and sponsor, Lisa (Stana Katic). With minimal characterizations, there’s little investment outside of being late night corpse chow. Very little interest is spent on Hannah’s father either, who attempts to right one more wrong. Sieve plants seeds of a thinly painted redemption arc that amounts to little. As The Possession of Hannah Grace attempts to stay under the 90-minute mark, opportunities are squandered again and again. Even with an R rating, shock value is watered down, ultimately pulling teeth when those graphic moments should transpire.

Admittedly, the shift from an expected exorcism film to a night of terror in the morgue showed some promise. 2016 Toronto International Film Festival entry, The Autopsy of Jane Doe toyed around with a loosely similar concept, yet prevailed. With The Possession of Hannah Grace, there’s no real urgency to go beyond filling an obligatory slot on the calendar. I’m not sure why Hannah Grace is trying to cause even more mayhem, there’s enough of a lifeless mess already.