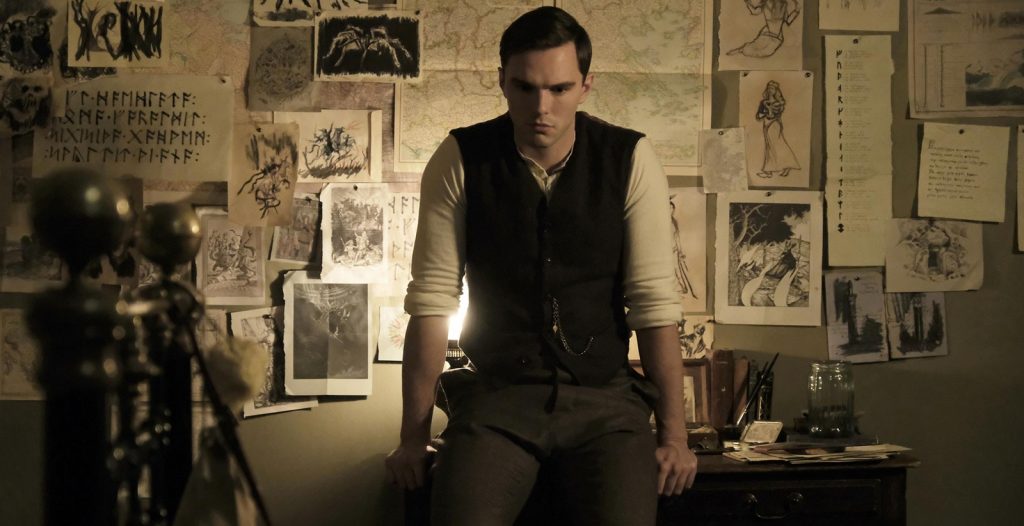 Credit where it’s due, Tolkien may come up short as far as playing with the standard biopic formula, but it looks nice. Tasking a film with telling the story of the man who authored The Hobbit and The Lord of the Rings will draw association to Peter Jackson’s adaptations of those epic fantasy novels, but Tolkien does find a way to make its pronounced imagery work. It’s just a shame the film doesn’t quite have a grip on letting the personality of J.R.R. Tolkien come to life more often. For all the costumes, sweet melodies, and ways of showing how this language nerd has quite the imagination, Tolkien rarely finds time to drop the pomp and circumstance in favor of something more gripping.

Much like many biopics these days, I couldn’t help but think of the opening of Walk Hard, as we first meet Nicholas Hoult’s John Ronald Reuel Tolkien. He’s a man stuck in the trenches during World War I, and it becomes a situation of watching this man go through his entire life story, before making his next big move. While we cut back and forth to some of the terror of the trenches, most of the film focuses on Tolkien’s early days as a schoolboy, where he befriends fellow artists and writers, forming a group or…fellowship of sorts. There’s also the love of his life, Edith Bratt (Lily Collins), who has a kinship with Tolkien, but various challenges get in their way.

There’s nothing inherently wrong with various framing devices and other common elements that form the structure of a biopic. I don’t expect every film to take a Steve Jobs or Love and Mercy approach to the lives of significant figures in history. The fact is, not everyone’s story makes a person a dramatic figure fit for a cinematic interpretation. Most people, if anything, lead fairly humdrum lives, with many of their most significant moments being ones of introspection, or at least not designed for showy visualization. That’s when filmmaking talent takes on a challenge. 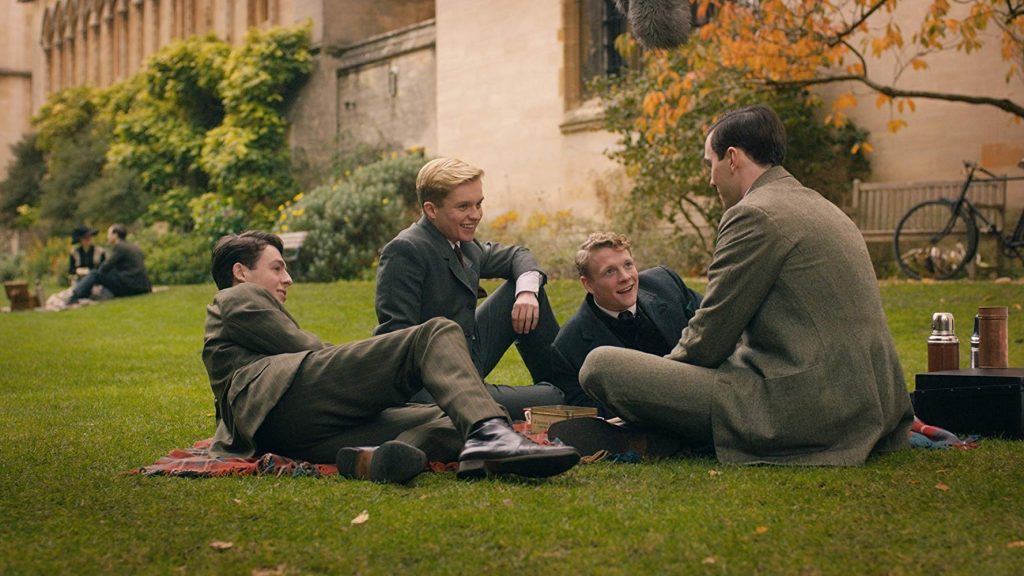 There shouldn’t be anything too interesting about an introverted coding expert creating a social media platform, or the use of math helping out a struggling baseball team, and yet The Social Network and Moneyball had the great benefit of filmmakers with a vision in mind for translating these stories in exciting and unique ways. Tolkien doesn’t find much to latch onto. The familiar elements work to keep the film watchable. I like seeing John and his friends debating each other, for example. However, I can’t shake the feeling that more interesting avenues could have been taken to show me who Tolkien was.

News may have hit about the Tolkien estate denouncing this film, complete with harrumphs and noses in the air, but that didn’t play into my mind here. It’s not a matter of elaborating on the man by taking cinematic license with the material. I was more concerned with the interesting bits left unexplored. While not an expert of Tolkien (I’ve read none of his famed novels), I was quite intrigued by his love of language. A series of scenes with Derek Jacobi gives the film the most spark it ever has, yet this side of Tolkien’s life feels like seasoning over the perfunctory story beats. Another scene has Tolkien interacting with the mother of one of his best mates, allowing for more screenplay highlights, yet it’s a scene built upon a shaky foundation.

The writing has a lot to do with the imbalance. Along with the cutting back and forth between war scenes, which is sometimes jarring, there’s a stilted nature to what we are seeing. Even the scenes of camaraderie sometimes come with limits, as it’s mostly just a bunch of boys talking about changing the world with their art in a manner so pointed, I expected them to start trading iconic lines from Tolkien’s novels. 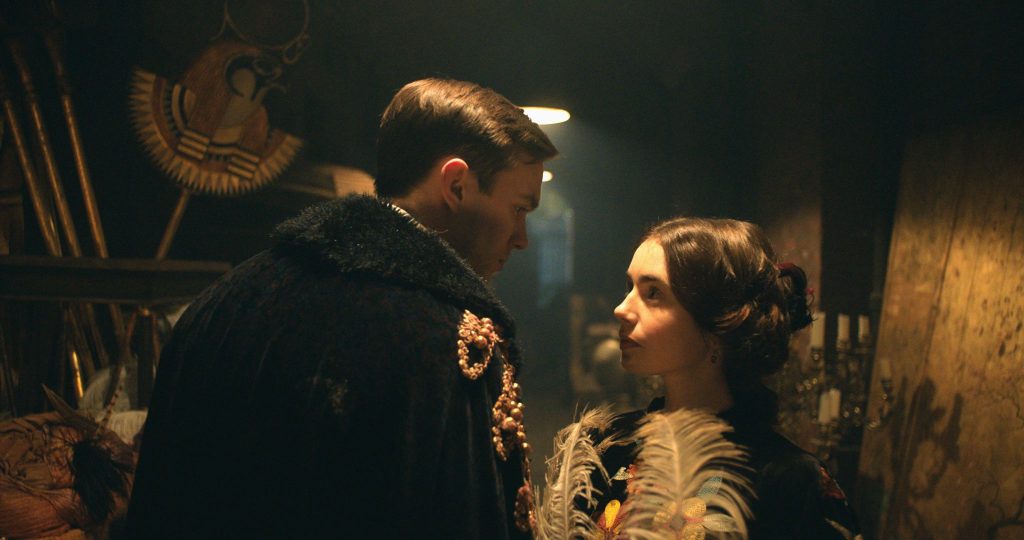 Whether or not it was necessary to explore other areas that served as a true inspiration for Tolkien (even a cameo from one of Tolkien’s best friends, C.S. Lewis, would have been welcome), having a better handle on these formative years could have helped the film stand on firmer ground. Hoult does what he can in a lead role, but the actor has proven to flourish better in character roles. Here, while capable enough, working as a well-groomed young man only goes so far when exploring the quirks that would lead to new languages and worldwide hit fantasy novels.

At least Finnish director Dome Karukoski finds a decent enough visual aesthetic for the film to rely on. Whether it comes to boarding schools or the war scenes, there’s a polish that keeps this film a step above TV movie territory. A beautiful score by Thomas Newman helps as well. Relating flamethrowers to dragons may be a bit much, but there is something to take away from scenes like one where Tolkien and Edith sneak behind the scenes of an opera and act out the show they desired to see themselves.

While the promise of a film about the man who created Middle-Earth may seem appealing, Tolkien takes a fairly restrained approach. It’s acted decently enough and has enough shine to keep it watchable, but the story is told in a disposable manner. Not unlike other biopics about great English men, there’s a sense of importance that seems to come with the film, but it matters not if all I’m seeing is the latest young or respected actor doing what is needed to guide us through their Wikipedia page. 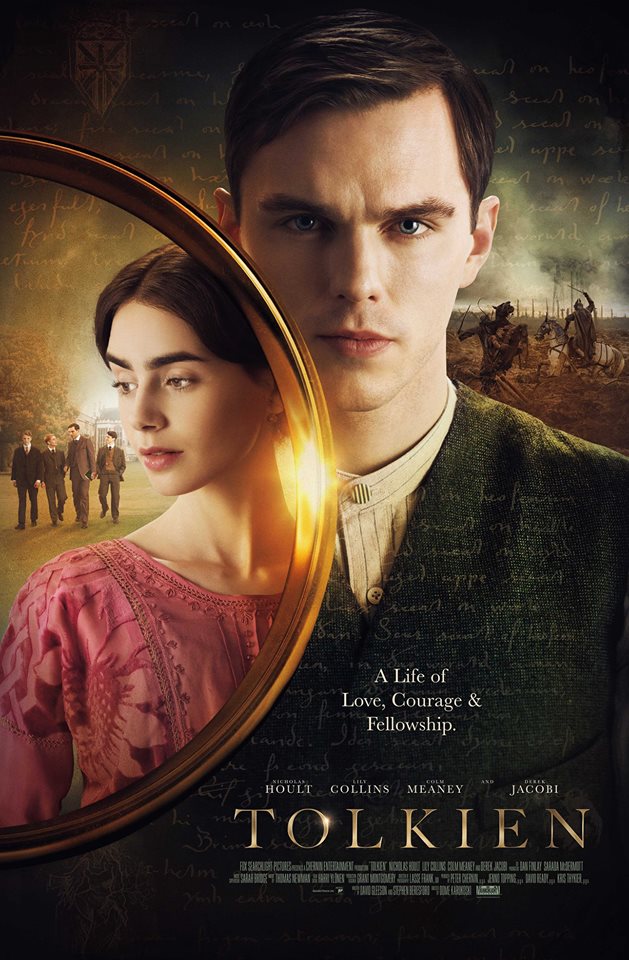