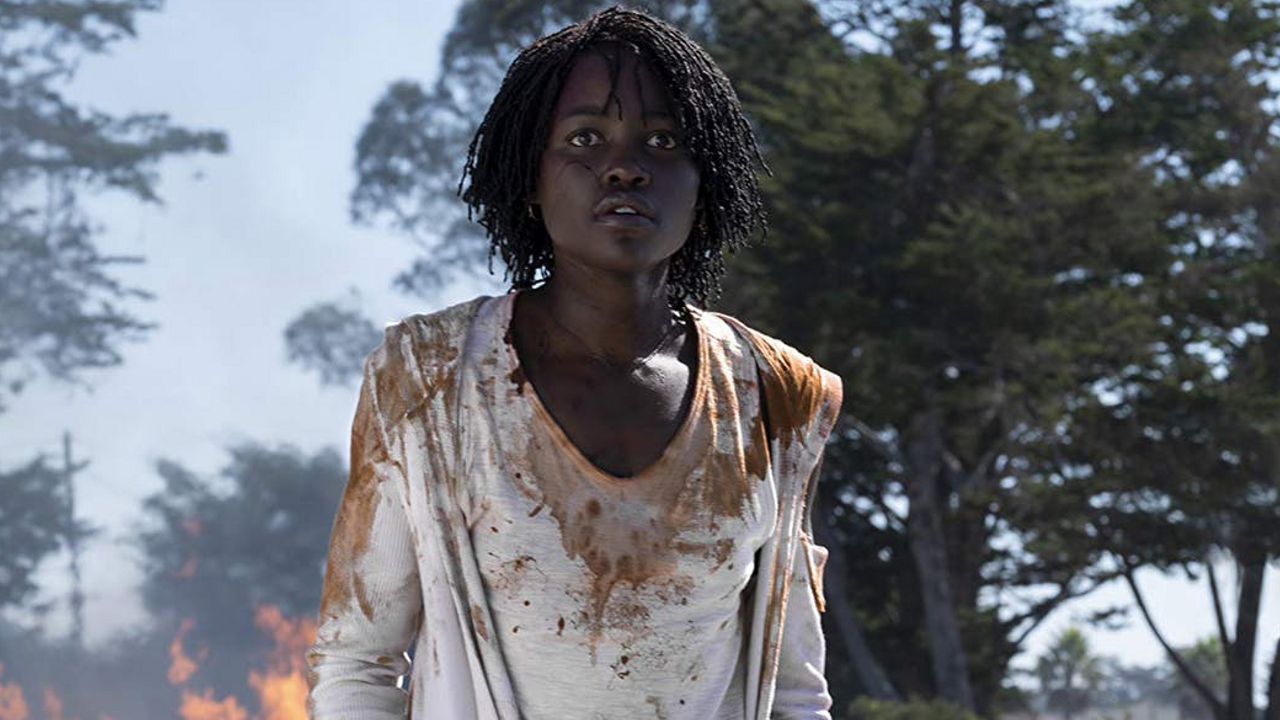 Nearly 20 years apart, Get Out and The Sixth Sense paved eerily similar roads for horror auteurs, Jordan Peele and M. Night Shyamalan respectively. Following up with 2000’s Unbreakable and 2002’s Signs, Shyamalan’s brand was synonymous with edgy twist endings. Likewise, Get Out cultivated certain expectations from future Peele projects as a razor-sharp social satire in the guise of horror. Us might take a sharper left turn into traditional terrors than Get Out, but its layered themes are equally as prominent.

Adelaide (Lupita Nyong’o) and her family (Winston Duke, Shahadi Wright Joseph and Evan Alex) venture to their summer beach house in sunny Santa Cruz. While her family treats the trip as an ordinary getaway, Adelaide’s anxiety heightens. As a child, Adelaide experienced life-altering trauma on the Santa Cruz beaches. It’s been 30 years since the incident, but terror like that never truly disappears. Throughout the trip, coincidences here and there trigger Adelaide’s fears. But it all comes to a head one night when the family’s doppelgängers appear without warning. Their animalistic doubles are what nightmares are made of, bringing out the worst of our inner self.

We live in an age of spoilers and obsessive dissection prior to a film’s release. However, Us clearly demands a clean state before viewing. That was the beauty of Shyamalan’s The Sixth Sense back in 1999. Ignorance was bliss then. Exactly who went into The Sixth Sense mapping out every twist and turn beforehand? It was just unheard of. Coming off of Get Out, it’s tempting to speculate how Peele would grow as a new horror visionary in Us. Us doesn’t have the same luxury of taking audiences by complete surprise with an unanticipated rich social commentary. Knowing Peele’s overnight mastery with symbolism and metaphors, we’re more prone to look out for the deeper themes at hand. Does that dilute Peele’s intentions and messages in Us? Of course not.

Nevertheless, the complexity of Us requires multiple viewings to fully appreciate. Peele offers plenty of accessibility for those simply desiring a terrifying, hypnotic experience straight out of The Twilight Zone. Ironically enough, he’s hosting the revival in a few short weeks. And for those searching for a few extra layers in their horror films, Us has much more happening above and beneath the narrative’s surface. Peele’s level of scope and ambition have surely expanded since Get Out. And while Us chooses to “get crazy” for roughly two hours, there’s enough restraint to remain on the rails.

Peele delivers a cleverly crafted script for Us that’s fully realized by his impeccable ensemble cast. Nyong’o doubles down on her talents as both the tormented matriarch Adelaide and her counterpart Red. Despite her acclaimed performance in 12 Years a Slave, Nyong’o hasn’t had the opportunity to explore a heavy-hitting leading role. Supporting roles in Star Wars: The Force Awakens and Black Panther  limited the award-winning actress. Her duality in Us is brilliant and mesmerizing, rivaling what Toni Colette (Hereditary) and Essie Davis  (The Babadook) brought to the horror genre in recent years. The rest of her family round out an equally impressive ensemble. Duke shows off his subtle comedic wit like he did as M’Baku in Black Panther last year. Their children, Alex and Wright Joseph, are both solid additions as well, playing vital roles in the family’s survival.

Jordan Peele seems to have a lot on his mind. And he makes it no secret that he wants to stir up yet another riveting conversation. Us isn’t just a horror film that will only be for a few days or weeks, but one to examine for many, many years to follow.

Review: ‘Us’ Delivers a Chilling Double Dose of Dread and Discussion