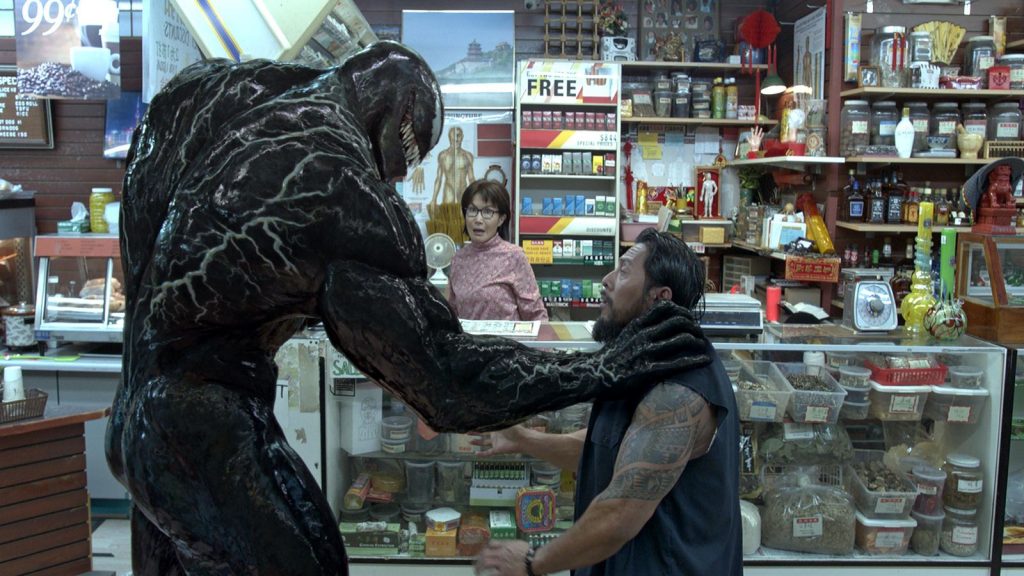 It feels like I’ve heard about a Spider-Man-less solo film about Venom for years. It’s often felt more like a threat or a dare, but Venom now exists, and it’s certainly… a movie. Issues with how to make this character interesting without his key foe aside, there’s almost enough to admire in how much energy seems to have been put into making something compelling out of what feels like a soulless exercise by a studio to retain the rights to certain Marvel comic book characters. It’s just a shame that essential elements like plot and character take a backseat to an over-eagerness to deliver on the title character’s extreme behavior, but not enough to make this the genuinely unapologetic monster movie it wants to be.

Honestly, it’s hard to know where to begin with the missteps taken to both appeal to the hardcore comic fans and function as a workable standalone anti-hero movie for those who are curious. It strangely suffers most when deciding to play to the formula of “hero chooses to save the day,” which is unfortunate given how Venom was starting to have a lot of fun, once the thing everyone will come to see began dominating the story.

So, I guess it would make the most sense to start with Tom Hardy. A brilliant actor who has already dabbled in his fair share of genre films, it is not hard to understand what appealed to him about playing Eddie Brock/Venom. The story focuses on a supposedly great journalist (despite all evidence contradicting this) bonding with an alien symbiote that gives him a violent alter-ego. This essentially means Hardy can pull a Lon Chaney Jr. and serve as a new interpretation of the Wolf Man. In theory, there’s nothing wrong with this. In execution…well, it’s something else. 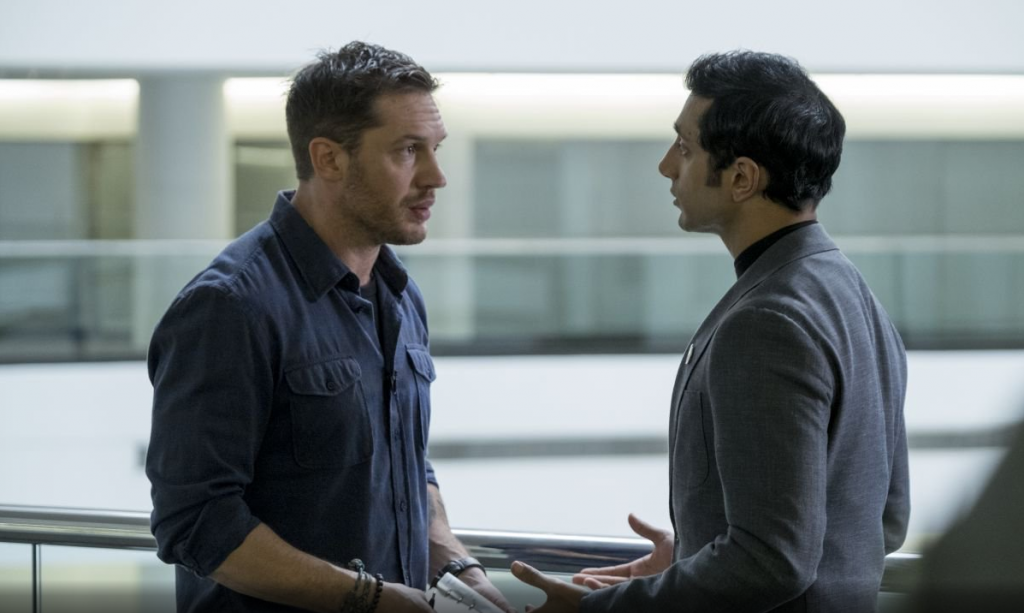 As I said, Hardy is a terrific performer, and his instincts told him to go for it in Venom. As Brock, Hardy has some variation of Marlon Brando when it comes to the accent, mixed with jitteriness, and manic expressions not too far off from Jim Carrey in The Mask, a film that shares a lot with this one, while the story feels lifted right out of 2004’s Catwoman. This is not a bad performance, as it is far too interesting, and the film’s highlights come during the middle of the film, as the Venom personality (voiced by Hardy) begins talking to Brock, making for a strange sort of buddy comedy.

With a heavy dose of intentional and unintentional comedy taking place, Venom has a lot going for it as far as being consistently entertaining. Director Ruben Fleischer (Zombieland, Gangster Squad) doesn’t really have a knack for action (loud noise and quick editing take center stage in sequences cut for maximum “trailer shot” effect), but he does seem to get how to organize a lot of the chaos in the smaller moments. It’s why I can’t wholly write-off the efforts made to make Venom work as a solo, standalone film, despite so many things working against it.

Casting certainly played a role in wanting this to work. In addition to Hardy, Michelle Williams gets to lean into some of the fun as Brock’s ex-fiancé, Anne Weying, even if her primary motivation was getting to work with Hardy and the money. Riz Ahmed is sadly wasted as a stock corrupt tech mogul, Carlton Drake, who only really begins to shine towards the end of the film. However, Jenny Slate and Reid Scott, generally known for comedic roles, somehow only serve to ground the movie in some sort of serious reality as a couple of doctors. It’s strange, but this is a peculiar film. 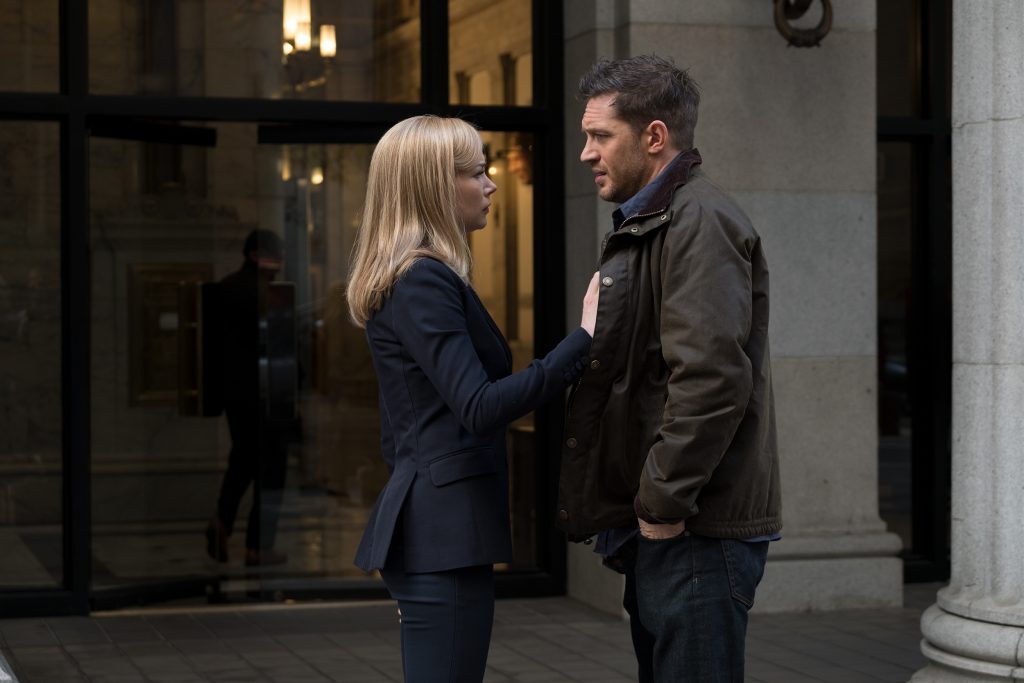 Offbeat is not always the greatest of choices, however, as unevenness often hurts Venom. Looking at other “anti-superhero” films like Deadpool or Sam Raimi’s Darkman, you can sense an understanding of what those characters and stories wanted to accomplish. Venom is all over the place. It’s body horror; it’s standard superhero stuff; it’s Jekyll and Hyde; it’s a hero’s journey. If this character is somehow supposed to work on his own, then a reason for it to exist is needed. Venom never really finds a way to justify why it’s here, aside from producer Avi Arad (Spider-Man’s greatest enemy) knowing how much the kids (and kids at heart) supposedly want to see this character on the big screen.

I could get behind that logic if there was something more to do with a very committed Hardy, but that’s the other big problem. After a slow start, the middle chunk of this film is amusing enough (working as an inferior version of the low-budget genre flick Upgrade that hit theaters earlier this year), but things take a big slide once Venom rushes to tell a story and end everything. Sure, it leads to a giant symbiote battle making for some splashy comic book imagery that was likely the point the writers and visual effects team had to work backward from to create the rest of the film, but it hardly adds up to anything. 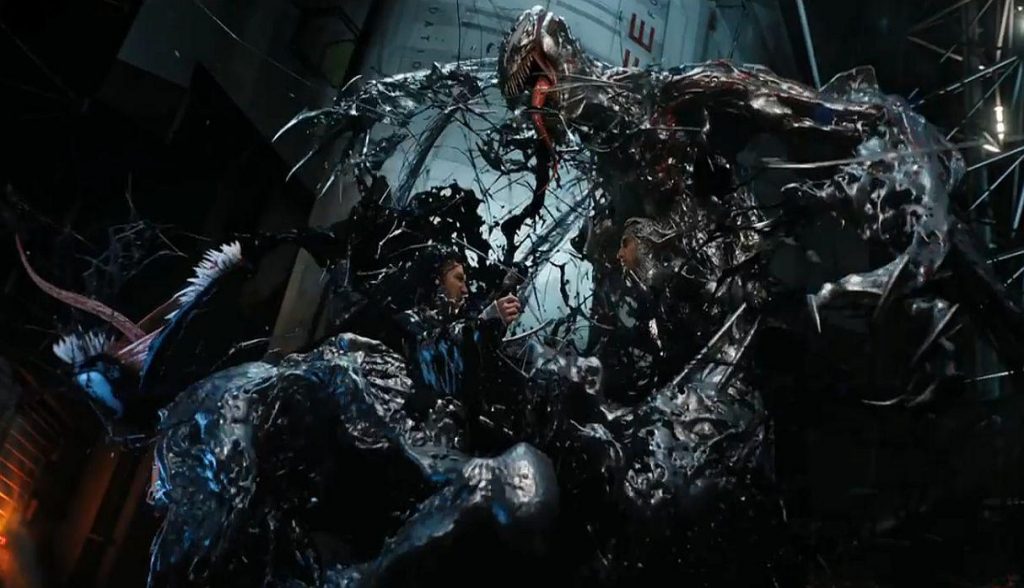 Is there anything to say about the visual effects? Not really. Venom looks fine, and since we mostly see Hardy’s face and body, and not a full-suited Venom, it means getting a lot of rubbery visuals, as Venom makes like Stretch Armstrong, grabs enemies, and throws them around. With a modest budget (when it comes to superhero films), seeing portions of San Francisco and mainly sets in Atlanta working as the only real location means getting more time to watch the movie try and compensate for Hardy’s bonkers performance. So, if seeing Venom scream into the air, complete with the giant tongue wagging all over the place, is what one came for, this movie delivers. If one wants symbiote action, there’s a lot of that as well, and very PG-13, as initially intended, given a choice to embrace the comic book attitude of the character, opposed to the more interesting horrors that may hopefully be mined further in a sequel – I guess.

Watching Venom made me actually wish I took notes more often, as I’ve hardly scratched the surface of all the ridiculous choices made for this movie. Again, I can admire that to a point, but the film stops short of being totally off the wall. Instead, it trades off an anarchist spirit in favor of watching a loose cannon get confined to a very tired save the world story. With a rhythm that ends up feeling far too erratic to get more of a sense of place and character, the highlights end up being overshadowed by the flaws, keeping Venom away from at least a mild recommendation. Will it satisfy a certain fanbase? Sure, with enough Brock/Venom interactions, a couple of heads being eaten, and all the laughable dialogue, there’s a guilty pleasure some will surely take from this off-the-beaten-path superhero/monster movie. Still, Venom doesn’t amount to much, even if it’s never dull. 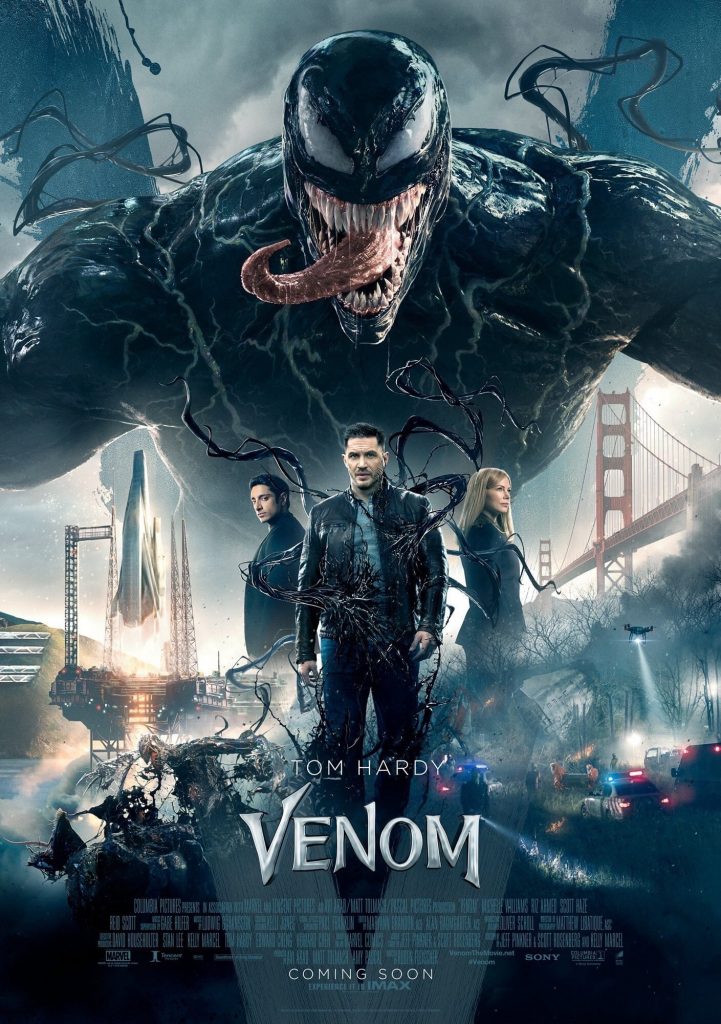 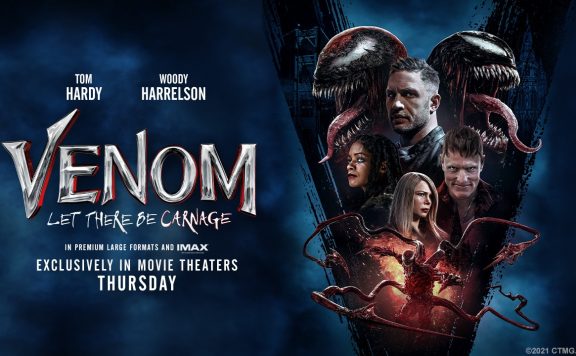 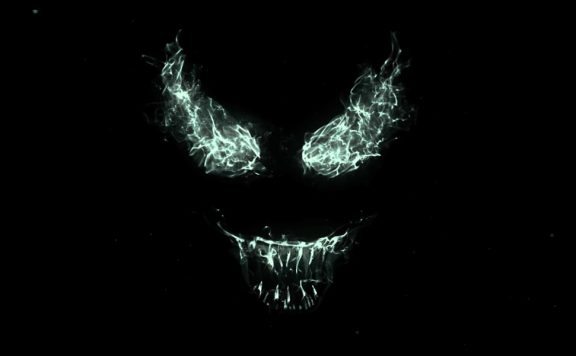