I did not see Robocop in theaters 30 years ago. Not because it was rated R, as I was already seeing Beverly Hills Cop II and Running Man that year (not to mention Terminator and Rambo on video). No, in 1987 Robocop still looked a little too scary for me. The following year I’d be brave enough to discover Freddy Krueger and see A Nightmare on Elm Street 4 on opening day. At ten-years-old, I was right. The murder of Alex Murphy was too much, let alone the toxic waste splatter. 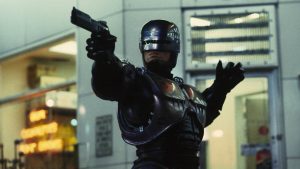 When I did see Robocop on video I loved it. At 10-11 I think I just thought it was cool he had a metal suit and could bust bad guys, but there is a reason why I kept coming back to Robocop for 30 years. That reason was the Alex Murphy story, and I think a portion of that got through to me 30 years ago. Certainly the idea that Murphy got a new life. But in the ensuing decades, I’ve realized Robocop is about how we protect our souls the more and more dependent on technology we become. 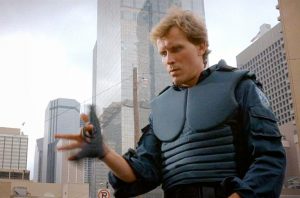 Alex Murphy (Peter Weller) died in the line of duty. He had a wife and son so it is sad that they lost a husband and father, but it’s not as simple as bringing Murphy back. See, OCP only saw Murphy as donor tissue for their cyborg. They thought they owned Robocop, and indeed he wouldn’t exist without their billion dollar technology. But he remembered who he was. He remembered Alex Murphy and you can’t own Alex Murphy. You cannot own a human being.

Robocop was prophetic in the authoritarian power of corporations. They couldn’t have imagined courts would give corporations the rights of individuals or make us agree to their terms and conditions just for the privilege of spending our money with them. Corporations will forever be trying to treat us as products. Therefore Robocop will always be a vital story. Whether a corporation brings us back from the dead with cybernetic technology or just sells our social media activity to their clients, they cannot own who we are.

My favorite scene in Robocop is when he goes back to his home and sees it vacant with an automated open house program. He remembers who he was and what the house was like when it was full of life. It’s not an action scene, it’s not a special effect but it’s the whole movie right there. He remembers, so humanity always supersedes technology. I get choked up just describing it. This is so important because they will always try to own us. As much as they buy and sell out online profiles and shopping habits, they cannot own our souls. 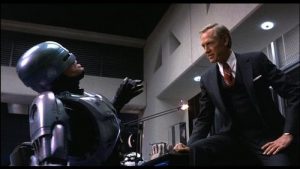 Yet Robocop gives Murphy a very real Achilles heel with his corporate creators. Directive 4 prohibits him from harming any OCP executive. Like any corrupt entity, they anticipated their corruption coming back to get them and installed safeguards to protect themselves. Murphy never actually overcomes this in the movie. He’s able to make OCP fire their corrupt exec so Murphy can shoot him, but he’s still under the thumb of OCP.

One of the more satisfying aspects of Robocop 2 is that Murphy actually frees himself from the directives by electro shocking them out of himself. The sequel shortchanged the most important part of Alex Murphy though. There is a scene where his wife is fighting to see her husband and OCP forces Robocop to tell her Alex Murphy is gone. I don’t believe Murphy would do that and I don’t believe his wife would give up on him. It seems that scene is only there to close that thread so they can just have an action story where Robocop fights the newer model. 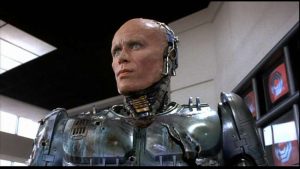 I love how being Robocop gives him advantages but he’s far from indestructible. He’s got computer sights, he’s bullet proof and has the strength of hydraulic robotics but in many ways he’s more vulnerable than a human. He’s slow and heavy so he can’t get out of the way. As Robocop 2 shows, magnets can be a big problem. He’s also quite easily disassembled which seems about right with new technology. All our new gadgets break really easily. How many people do you see with cracked phones? 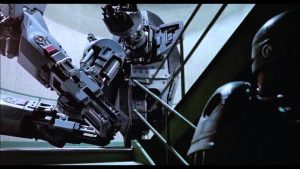 I love ED-209. What a sad, pathetic villain he is. It’s not his fault. He was full of design flaws. It’s not his fault his feet can’t walk down stairs or that his vision can’t process a pedestrian obeying his commands. They keep trying to find tasks he’d be useful for but he’s easily defeated each time. It’s kind of endearing, the poor bastard.

Robocop sequels got a lot wrong, but as long as it’s about Alex Murphy remembering who he was, a Robocop movie could always be valid. I even liked the 2014 remake. It focused even more on Murphy’s family and had some new twists on how the corporation tried to control him. Sadly that won’t continue either, but the Canadian Robocop TV series did a fairly good job if you’re looking for more. 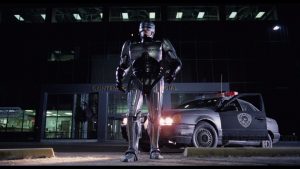 I did eventually see Robocop in a theater some 20 years later. Peter Weller was there to speak about it and he agreed the reason the film endures is because it’s a resurrection story. He also said he wasn’t very interested in the sequel until they added a zero to his paycheck. I like Weller’s words. The Basil Poledouris score is so rousing it feels like resurrection. When he walks out of the fire, or says his name is Murphy as we go to credits that theme is the musical feeling of coming back to life.

So today is really the 30th anniversary of Alex Murphy. He is who I think about when I think about Robocop, and he always will be. Since great sci-fi is always really about the present, we are all Alex Murphy. The corporations see us all as spare parts, but they do not own us. 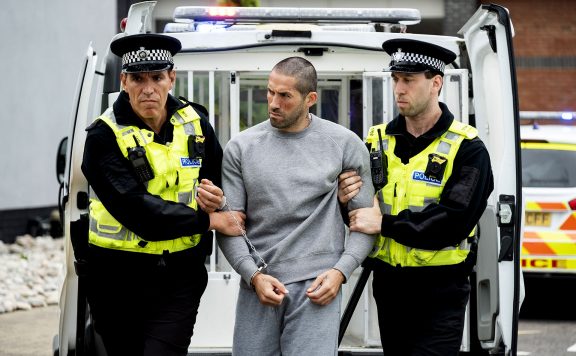