Just so we can get this fully out of the way, I have not seen the original “Robocop” from the 1980s.  It’s not that I didn’t have interest in seeing it, it’s just that I became lazy and just never got around to checking it out.  Having said that, I wasn’t that excited for the remake of it coming out, despite its impressive cast.  People weren’t that interested in a “Robocop” remake, nor were they even asking for one in the first place.  And yet, the honchos at Sony went through with the production, and thus, here we are today.  As someone who is all for remakes as long as they can add something new to the mix, “Robocop” surprised me.  It might not be the best remake you will ever see, nor is it the first great blockbuster of the new year, but thanks to the solid acting, great visuals, and fun action sequences, “Robocop” is a movie that is well worth seeing if you’re not into any of the sappy Valentine’s Day films coming out this week.

The year is 2028, the city is Detroit, Michigan, and Detective Alex Murphy is on the hunt to take down a local drug lord who has practically the whole town on a string.  In a devious act to kill Murphy, the drug lord plants a bomb under his car to blow up when he pleases.  So when Detective Murphy, a loving husband, father, and devoted cop, is critically injured from said bomb, his wife gives consent to help give her husband a second chance at life.  Omnicorp, a company responsible for creating robots for every country in the world to serve as a replacement to cops, sees Murphy as their golden opportunity to turn him into a half man, half machine breed.  With Murphy as this hybrid, they can train his mind and his body to be the police officer that America, a country that does not want an emotionless robot prowling and protecting their streets, can truly desire.  However Murphy has other plans, being that he wants to take down the people responsible for his attempted murder.

For an actor who, so to speak, is up and coming, Joel Kinnaman really holds the film up well as both Alex Murphy and Robocop.  Not only is he able to play the human, dramatic side of Detective Murphy, but he is also able to channel the monotone, robotic side of, well, the Robocop.  I’d need to see him in a couple more roles in order to fully determine that he has what it takes to become a big Hollywood star, but from what I saw here, he definitely has the potential.  The rest of the actors are really good in the film, but none quite stand out from the rest of the film to me personally.  Gary Oldman has some great scenes, Michael Keaton is really good here, and Samuel L. Jackson is playing Samuel L. Jackson, and there is nothing wrong with that.

For a movie that one would think a studio wouldn’t care much about because of its release date, the visual effects and the action is done extremely well.  The visuals reminded me a bit of “District 9” and “Elysium,” in which the robots look pretty real at times.  There’s a scene where you see the remains of Murphy that not only looks gruesome, but also shockingly great.  As for the action, there is a little bit of shaky cam here and there,e but for the most part the action is well done, and is a lot of fun to watch.  For those who complain about the action and the visuals not being practical, I feel that they have to suck it up and understand that very little movies are done with practical effects in this day and age.  I would love to see more films done practically, but CGI is here to say, and I am personally ok with that.

What I want the most with remakes is to see what the filmmakers can do to put a different spin on the “classic” tale. so to speak.  From what I’ve seen of the original “Robocop,” that’s exactly what they did.  The emotional aspects of seeing the family of Detective Murphy coping with this transformation that the husband/father has to go through is actually pretty damn compelling.  What they do with Murphy’s character and all the people who control his robotic ways is actually engaging and entertaining to watch.  The two setbacks that the film has that took me out of it is that A.) the villains are typical action movie villains who lack some substance, and B.) the film becomes really slow about 30 minutes into it, which really shouldn’t happen in a big-budgeted blockbuster.  Other than that, “Robocop” is a solid February release with great action, solid acting, and great visuals.  Definitely check this out if either “The Lego Movie” is sold out or you’ve already seen it. 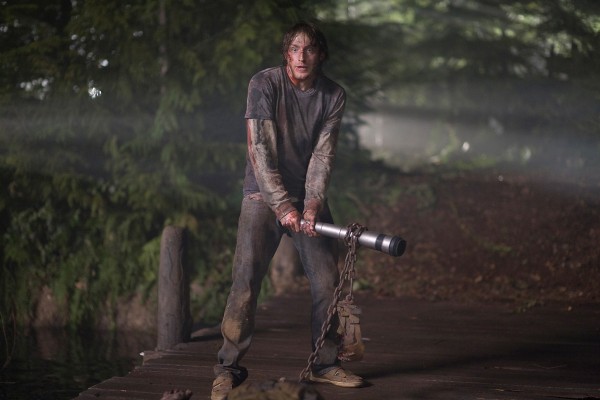 Just so we can get this fully out of the way, I have not seen the original "Robocop" from the 1980s.  It's not that I didn't have interest in seeing it, it's just that I became lazy and just never got around to checking it out.  Having sai...
0
Average User Rating
0 votes
Please sign in to rate.