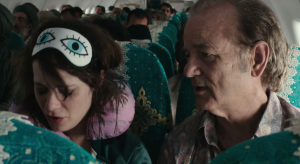 Richie Lanz (Bill Murray) is a downtrodden music manager, living in Van Nuys, California when he gets the idea to take his one and only worthy act, Ronnie (Zooey Deschanel), on a USO tour of Afghanistan. She is relunctant to go to say the least, but agrees. While on the plane, she is openly discussing her regret through bouts of vomiting.

Once they arrive in Afghanistan, there are military personnel waiting to escort them to their hotel. The scene when they arrive is what you would expect from a war ridden country. There are bombs going off, poverty and destruction everywhere. Once they reach their hotel, Ronnie meets Bombay Brian (Bruce Willis) and they hit it off. Richie then drags Ronnie back to bed so she can rest for her show.

When Richie returns to the hotel room, he finds that Ronnie has left, taken all his money and his passport. In a series of mishaps to find a way to get his passport, he runs into Jake and Nick (Danny McBride and Scott Caan), a pair of men who sell weapons and ammo to the Afghan villages. They take Richie to a party where he encounters the whore of the village, Merci (Kate Hudson). 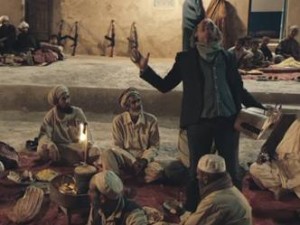 Nick and Jake convince Richie that they will pay him a ton of money if he delivers ammo to this remote village run by Tariq (Fahim Fazli). Relunctantly, he agrees and delivers these bullets with the random taxi driver, Riza (Arian Moayed) who he met and Bombay Brian and his group. Once they meet Tariq, he invites Richie and Riza to come to his home and have dinner and then he will pay them. After a long and awkward scene of Richie performing “Smoke on the Water,” he relieves himself in the desert where he hears Salima (Leem Lubany) singing in the cave. 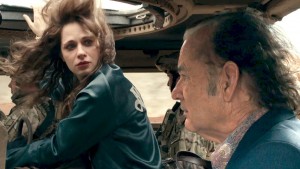 As soon as Richie heard Salima’s voice, he knew that she needed to join Afghan Star, where she would sing and win the competition. The only problem is Pashtun women are forbidden to sing. Richie tries to ask her father, Tariq to allow her, but he yelled and kicked Richie and Riza out of the village. They discover that Salima has stowed away in the trunk of the taxi. Through a series of events, Richie convinces the producer of Afghan Star to let Salima sing on the show. When she does, there is outrage and people are very angry. Her father comes to retrieve her and bring her back to the village. He already has enough stress with Azam Ghol, (Tamir Ali Khan), trying to take over his village. Merci discovers while at a party that the bullets and ammo that Nick and Jake have given the village are duds and don’t work.

Richie goes back to his managering roots and plasters Salima’s name all over the country. He gets everyone to know who she is and she is voted into one of the final three spots in the competition. Richie returns with the taxi driver and Bruce Willis to the village, where he will stay to help the villagers fight against Azam Ghol and his group. In a moment when Richie is shot in the shoulder, he is on the ground staring at the sky, and apparently everything is resolved, Salima goes back to singing in the competition and sings a song of peace that joins the nation together. 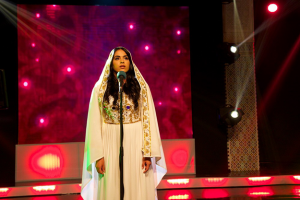 Really? REALLY?! There are so many problems that I have with the ending AND this story. What happens to Ronnie? Why is it even important to include that Richie has a daughter since she is only shown at the beginning and never again? A war of territory was resolved in the time that Richie was laying on the ground after being shot in the shoulder? Everyone in a very traditional country has suddenly given up on the thousands of years of tradition and beliefs and embraced Salima? So much of it doesn’t make sense. It is almost as if they ran out of time / money and had to work with what little they had to wrap up this film.

Another problem is that I didn’t actually really care about ANY of the characters in this movie. There was not enough development of any of the characters to really have an attachment to them. The pacing is just all over the place. It feels a LOT longer than it is and the story is so so. Somewhere I believe there is a great message with a good emotional story with it, but it was lost in all the hullabaloo of Bill Murray being Bill Murray. AND they didn’t even play ROCK THE KASBAH in the movie!

Rock the Kasbah Movie Review by Ashley Menzel: Rocking the Kasbah right to sleep. Richie Lanz (Bill Murray) is a downtrodden music manager, living in Van Nuys, California when he gets the idea to take his one and only worthy act, Ronnie (Z...
0
Average User Rating
0 votes
Please sign in to rate.