Rough Night is the female answer to The Hangover. It shows that funny women trying to get out of trouble is just as funny as the traditional dude bro comedy. It shouldn’t have to be said, but since some people are keeping score it’s nice to have a win. It’s this summer’s Bad Moms. 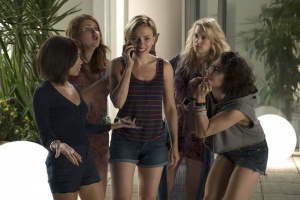 College friends reunite for Jess (Scarlett Johansson)’s bachelorette party. Jess is now running for senate, which means she hardly has time to see her fiance Peter (Paul W. Downs), let alone her sorority sisters. Alice (Jillian Bell) is most looking forward to reconnecting over a weekend in Miami, with Blair (Zoe Kravitz) and Frankie (Ilana Glazer), who were lovers in college. Jess also invites her Australian friend from a semester abroad, Pippa (Kate McKinnon).

Even before things get dark, this is a fun group of people with whom to spend 90 or so minutes. There is genuine support and camaraderie between them, good pratfalls by Bell and reactions by Johansson. Their arrival in Miami sets up all the raunch that’s about to follow. Their reactions to sex swings, swingers and phallic party favors are endearing. The ladies undercut the party scenes with something square and cheesy, which is a decidedly more welcoming vibe than a lot of male comedies which seem to say, “Man, if only I could do more drugs.” 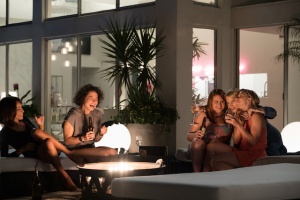 It’s funny when they start to dabble in drugs, and Bell has perfectly timed outbursts. The night really gets rough when they accidentally kill the stripper, in a head trauma typical of bachelor party urban legend and movies like Very Bad Things or Stag. Ryan Cooper gives the best dead body performance since Weekend at Bernie’s.

Rough Night escalates both comically and dramatically. Covering up their crime gets harder and harder, but each misadventure exacerbates the friction between the group. By the time they all have it out, it’s cathartic for the audience because we’ve been waiting for them to deal with their issues. All of the comedians are as funny as ever, and Johansson is convincingly goofy and natural. 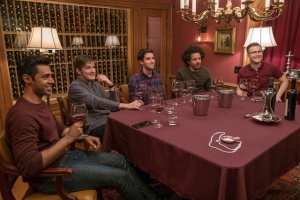 The guys are totally game to play the thankless role usually foisted on women in raunchy comedies. Their bachelor party is an orderly wine tasting, and they’re totally into it. No one is saying, “Dude, can’t we go to a strip club?” It’s Peter who begins freaking out and nagging. When he decides he has to intervene in Miami, Peter goes all in on emasculating himself for love. His friends entirely support him rather than the cliche of giving him shit for it.

To see how female filmmakers portray the typical female subplot with guys is revolutionary without being the least bit threatening. The guys are in on the joke and it’s all in good fun. But Amy Smart chased the Road Trip guys on a misadventure to pursue her prospective boyfriend. The women of The Hangover, Ted, Wedding Crashers, etc. are constantly harshing the guys’ buzz. Not only should that not be the woman’s role in a comedy, but nobody has to be the wet blanket. Everyone can be fun, or at least well-meaning.

The brash punchlines are always funny, and there’s a healthy undercurrent of social issues fueling some of the comic misunderstandings. For example, Franke is worried some of the cops are “rape cops.” That is a true issue of policemen abusing power, and because it’s quite reasonable for a group of women to be cautious, it makes the subsequent joke work. 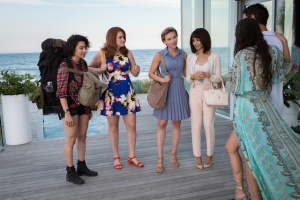 Stay to the very end of Rough Night, because there are more scenes during and after the credits. Man, Rough Night is such a satisfying, fulfilling comedy. It just shows what you can accomplish when you let funny people do their job. 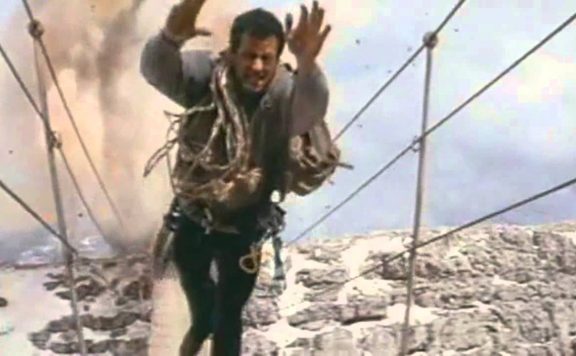 Rough Night Review: How To Lose A Guy In One Day

Rough Night is the female answer to The Hangover. It shows that funny women trying to get out of trouble is just as funny as the traditional dude bro comedy. It shouldn’t have to be said, but since some people are keeping score it’s nice to...
0
Average User Rating
0 votes
Please sign in to rate.