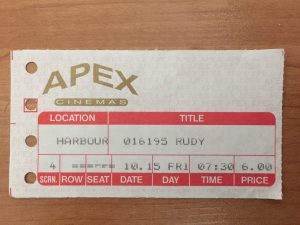 Rudy may have been the last underdog story that wasn’t about winning. Maybe The Full Monty if we exit the sports world. There’ve always been underdog movies about winning too, but have we lost the ones where going the distance is the victory, like Rocky? I mean, Creed wins his fight but his journey is sort of the inverse, breaking out of his legacy’s shadow.

Listen, I sure don’t love football, but I know what it’s like to love something so much you’d die before you let anyone take it away from you. And football was considered a cool dream. No one thought writing about movies was cool. 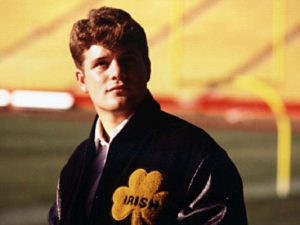 So I think I love Rudy because I am Rudy, and I knew it in 1993 before I’d done most of the work to get there. I was already reviewing movies in high school. The next year I would work at a movie theater to be closer to movies. I went to film school. I moved to LA knowing no one. I just knew I had to be here and I’d make something happen. I started getting published and going on red carpets and junkets. Veterans had the attention of talent but I was assertive enough to jump in and get my story. Actually, for me I won the big game by having a career in journalism. Rudy was happy just to get on the field. 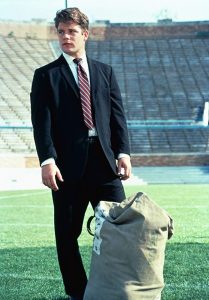 I had naysayers but they pretty much left me alone. People were actively trying to stop Rudy Ruettiger (Sean Astin). His high school won’t even let him attend their college visit to Notre Dame. Even when he gets himself into Notre Dame, his father (Ned Beatty) still side-eyes Rudy’s football ambitions. My teachers at best humored my Hollywood ambitions, probably expecting them to work themselves out, but my family was more supportive than the Ruettigers. So that was one less hurdle I had to overcome.

I also got good grades and had resources so college options were available to me. Rudy doesn’t have grades or money. So Rudy just gets himself there and figures it out as he goes along. 80% of success is showing up and luck is where preparation meets opportunity. Those catch phrases aren’t implying it’s easy. It’s not supposed to be easy. Some people get easy breaks, and the harder path could still fail, but going above and beyond puts you ahead of all the folks who had it handed to them. 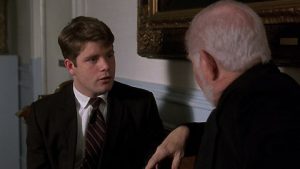 A chance encounter with Father Cavanagh (Robert Prosjy) gets Rudy enrolled in nearby Holy Cross College to get his grades up. Rudy shows up after practice offering coach Parseghian (Jason Miller) to do anything to help, and ends up volunteering for the greenskeeper Fortune (Charles S. Dutton). Rudy does whatever he can to make sure he’s involved, so they can’t ignore him. 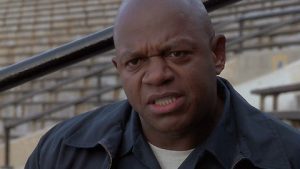 It worked for me too. Yes, I saw opportunity when the dot coms were starting up and needed content. I volunteered at first just to get published, then started selling my material. I got in front of studios so they had to work with me. The industry is different 20 years later but I’m sure there are still ways for new journalists to break in on their own merits. 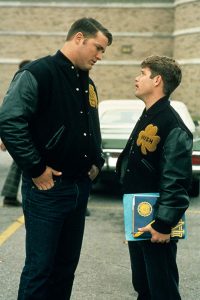 Rudy finds out he’s dyslexic too, so even putting in the study time is harder for him. He sneaks into the Football Boosters club but blows it when he can’t produce a Notre Dame ID and he can’t even afford tickets to attend the games. Rudy is resourceful though. He leaves a window unlocked for himself (eventually Fortune leaves a key for him. That’s also resourceful. He made the right friends.)

When Rudy finally gets into Notre Dame and tries out for football, he can’t outrun or out tackle. He can out hustle though and one coach notices. Hell, if Rudy had the height and build of a baller, he’d be dangerous with that much intensity. It’s for everybody else’s own good that he’s all heart. I suppose I had a tad more than just raw ambition. I had already trained at writing and journalism, and I had typing skills. That plus showing up to media events and filing stories for startups made up for having no connections. I got myself noticed by the right people. 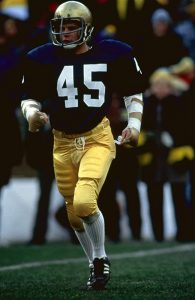 Still, practice is one thing. The coaches can’t afford to give Rudy a seat on the bench when they need all the players the sport allows who could help in a playoff. Rudy makes a deal to dress for one game. That’s victory enough, and then they change coaches. That also always happens. The new editor doesn’t care how much work I’ve done for his predecessor. I’ve got to impress him or her all over again, and if the new editor just isn’t interested in what I do I’ve got to move on.

Rudy’s big lesson, articulated by Fortune, is “you don’t gotta prove nothing to nobody but yourself.” I learned that before Rudy. I didn’t care who told me not to be so obsessed with movies or to do something else. I only had to prove to myself that I could. Sure, Rudy would love to be seen on the field when his dad watches the game on TV, but ultimately he only had to prove to himself that he had what it took to make it to the big show. 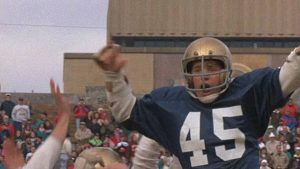 But Rudy does make such an impression on his team that they all volunteer to sit out the final game to let him dress. I’m not sure I’ve got a parallel there. I certainly had veteran colleagues who referred me to opportunities, but no one said, “I’m not going to work unless Fred gets a chance.” But maybe I can do that for someone else. I certainly advocate for female and POC journalists who were being ignored by the studios. That’s something I can use my platform to do. It’s still ultimately in the hands of the people in power, but if I have their ear I can say, “Hey, this is important to me, so as long as I’m helping you can you consider these other colleagues who want to support your films?” 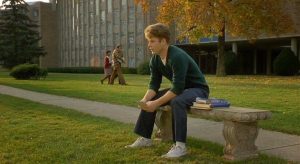 Like any “based on a true story” Rudy is embellished. I’m fine with that. Print the legend. It’s the heart of Rudy Ruettiger’s drive writ large, and I firmly believe inspiring that kind of ambition is \positive. 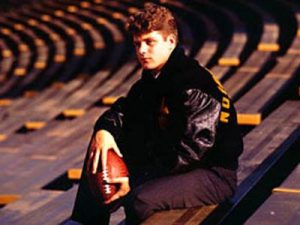 When I was in high school, the Rudy review in the Capital (now the Capital Gazette) complained that Rudy was a bad Rocky story because he wasn’t integral to winning the game, and audiences were supposed to be happy enough that he made it. I wanted to ask the critic if he actually knew the end of Rocky or didn’t understand that Rocky’s whole journey, like Rudy’s, was about going the distance. Now that I’ve gone the distance and I’m published, I now have the forum to say that Rudy exemplifies the underdog story, where it’s not about winning, but about what you prove to yourself.