A few weeks ago, I got to participate in a small press day for Blinded by the Light, the Bruce Springsteen infused coming of age story inspired by the life of Sarfraz Manzoor. At the junket, I got to chat briefly with Sarfraz Manzoor about the film and what it was like to share his story with the people at Sundance before releasing it into the world.

Scott Menzel:  I saw the film at Sundance and you were talking a little bit about how there was … there was really no expectation for this film going into it outside of the music of Bruce Springsteen, which was the reason that I signed onboard to see it. What was your initial reaction seeing that with a packed house at Sundance who all reacted to the film?

Sarfraz Manzoor: Oh man, it was a really moving night because I got there and I sat down and there are 1300 people there. It’s quite intimidating, you know? Then the film starts and there’s just silence for quite a long time, first 10 to 15 minutes. I’m like, “I think they’re just surviving this.” Do you know what I mean? They’re just enduring it, they’re not really liking it. I was getting a bit nervous but thinking, “At least we got to Sundance, that’s victory enough, you know, let’s be grateful.”

Then it ends and there’s this standing ovation. I’m like, “Oh my God, they really did like it!” Then the warmth of the reaction in terms of the question and answers and then the after-party. For me, the thing was when I got to the after-party and I looked on my phone and all the people were coming out of the screening and started tweeting about it and these are just regular people and are saying things like “the feel-good film of the year” and “most joyous,” I was like, “Oh my God, this little thing that we’ve made about my life when I was 16, this is what it’s like when it starts touching other people.” That was, that was just a really, really amazing moment.

Scott Menzel:  How does it feel to know that your story is now shared? And that it is going to be shared with millions of people?

Sarfraz Manzoor: It just feels a bit out of body experience, do you know what I mean? Because what I have to try and keep remembering is this is actually real? Yes, we fictionalized stuff. There are some plot points that are for the movie but the dad is basically my dad. The mom is basically my mom and that kid is basically me. If you go and watch the film, there’s a scene where Javed is in his bedroom and there’s all these poems on the wall. Those are my actual teenage poems.

Sarfraz Manzoor:  Yes, my real poems. The car that the the dad drives was the car that my dad drove. So that level of absolute honesty, and the fact that you’re sitting here and now you know a little bit about my dad and my mom and what I listened to, I mean it just, it’s so insane.

But what I think is really lovely is that what our, when I was growing up, Springsteen really spoke to me. He was really specific about Asbury Park and the streets and the factories, and there are wars and I kind of connected with it even though I didn’t live in Asbury Park. What I love is that what we’ve tried to do with this film is open my world up, the town of Luton, the places I went to, the things I experienced, be really specific about it, but do it with so much love and heart that people who didn’t have that background still find a connection with it.

Scott Menzel:  I think in this time where we’re seeing all these storytellers from all different cultures, I think your story is so relatable to so many people because it is a universal story. I think a lot of people can connect with this and that’s why I hope this movie is going to do well.

People sometimes judged him on the exterior and not what was inside. Similarly, now I’m trying to write a story, we’ve made a film. If you forget the exterior, it’s actually about a lot of people’s lives. And so in a way, what we’ve tried to do is just do the same thing Bruce did, but we did it for Bury park and he did it for Asbury Park.

Scott Menzel: Awesome. Well, thank you so very much. It was nice meeting you.

Blinded by the Light is now playing. 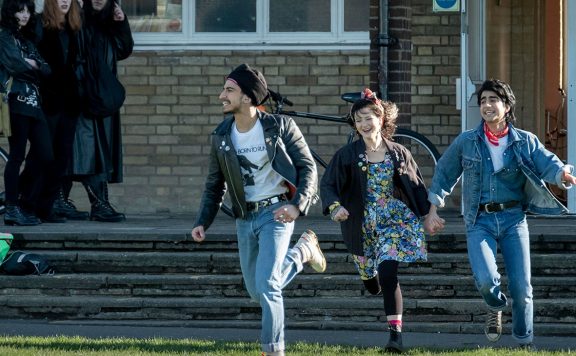