Save Yourselves! premiered at the 2020 Sundance Film Festival back in January. The film was one of the more talked about comedies to play at the festival this year and I personally found the film to be a lot of fun. The premise of Save Yourselves! is rather simplistic as the film follows a young couple played by Sunita Mani and John Reynolds who decide to unplug from technology for a week while on vacation in the woods. However, while they are disconnected from the outside world, an alien invasion occurs, leaving them unaware of what to do next.

I recently got to chat with Alex Huston Fischer and Eleanor Wilson about their feature film debut. The duo, not only co-directed the film but also co-wrote it as well.

Scott Menzel: Hello. Lovely to meet you both, virtually.

Eleanor Wilson: Hi! You too! Look at that background.

Eleanor Wilson: A lot of cool stuff there.

Scott Menzel: Yeah. Most of it is Nightmare Before Christmas and Tim Burton collectibles from the early ’90s. I always have to start with where I see a movie and I saw this movie back at Sundance. What was it like for you two to have your first film premiere at Sundance?

Alex Huston Fischer: We didn’t expect to get into Sundance.

Eleanor Wilson: Yeah. It’s a silly comedy and so there’s an idea that people have about Sundance that it’s like more prestigious…

Eleanor Wilson: We didn’t think that our film was either prestigious or important, but it was so fun. I don’t know which screening you were at, but we just had a blast at the ones that we went to.

Alex Huston Fischer: The audiences are incredible. They’re just so reactive and they were laughing and it was a dream. It was like…

Eleanor Wilson: And obviously looking back on it now, it feels like a world away.

Scott Menzel: We talk so much about the pressures of the internet and how much time we spend there and what we should be doing instead. During this particular period of time, where are you finding you’re spending most of your time?

Eleanor Wilson: Yeah. We’re obviously home and we are collaborators so it’s nice to be able to have the time to work together on things. And there are certain days we’re productive and certain days where we feel the doom. 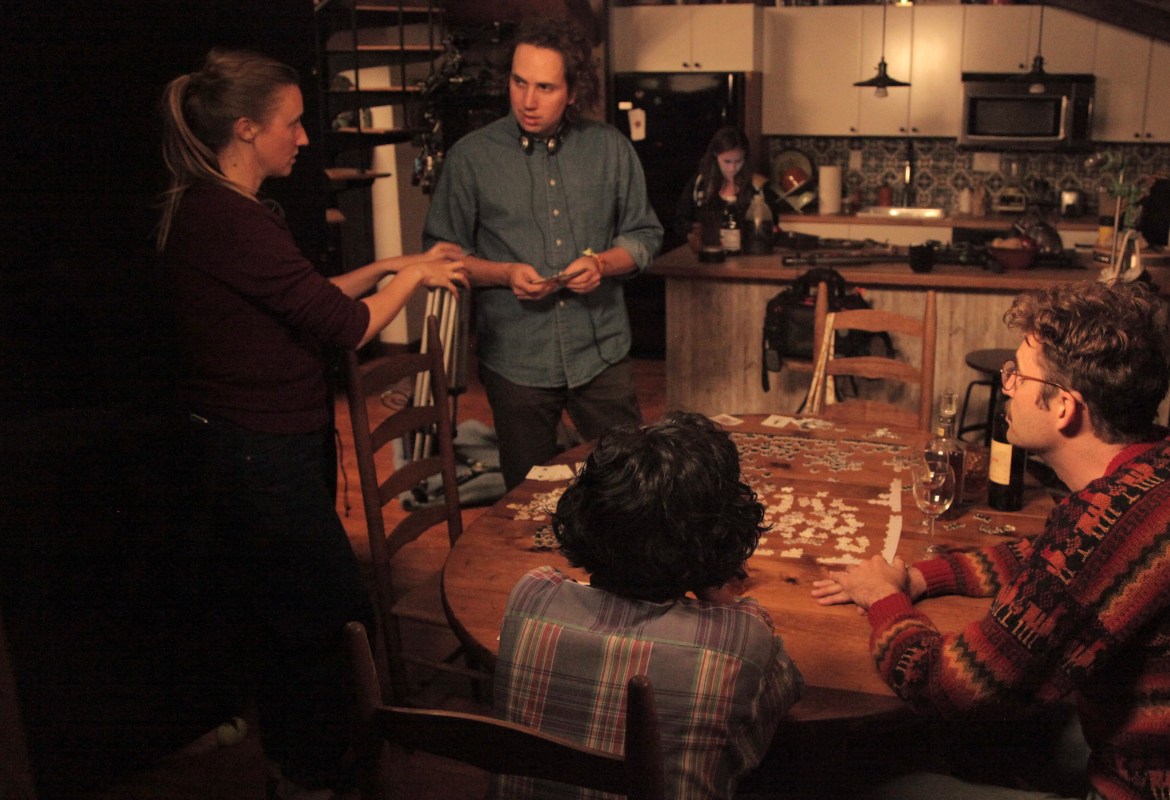 Scott Menzel: If you can tell a viewer, and I know this is something that a lot of people ask, but with a film like yours, where I feel the ending is left open to interpretation as to what was going on, what is a lesson that you hope a viewer would take away from your film when they get finished watching it?

Eleanor Wilson: Yeah. I mean, there’s definitely some messages and themes in the movie. I think the biggest thing for us was just this idea of people… That we’re all kind of obsessed with our own existences and failing to see the bigger picture of the world falling apart, and this is the sped-up version of that. So we hope that people think about that aspect of it as well. But first and foremost, I just hope in this very strange time that we can give people some fun and some joy.

Scott Menzel: So, I watched this movie again a couple of weeks ago. It was the first time that I’ve seen it since Sundance and I will tell you, it holds up well on second viewing. So that’s always a test for a Sundance movie.

Alex Huston Fischer: Oh, cool. Thanks so much. That’s great to hear.

Eleanor Wilson: Yeah, right, outside of the excitement of the audience and the altitude. Is it still good?

Alex Huston Fischer: Because sometimes you see a movie at Sundance and you’re like, “Oh man, that was the best movie I’ve ever seen in my whole life,” and then the Sundance thing wears off.

Scott Menzel: 100%. That happens a lot. I’ve never asked anyone this, but I want to ask you, two fine folks, this question. When you sell a movie at Sundance, what is that process like?

Eleanor Wilson: After it’s sold or how it happens?

Scott Menzel: Yeah, tell me, walk me through the process.

Alex Huston Fischer: They mostly keep us out of it. We’re intentionally not involved.

Alex Huston Fischer: We did get to collaborate on the trailer and…

Eleanor Wilson: We just had a lot of conversations about the vibe of the movie and the comedy and what, the tone, and how we kind of wanted it to be represented. And we think they did a really good job of making the marketing materials really fun. It’s a lot of that and then there are deliverables, is this whole thing. You have to go back into the project and make sure everything’s kind of done correctly. We had to change some sound effects that we learned were illegal in certain markets.

Alex Huston Fischer: You can’t play this in America. It was like, “oh all right.”

Eleanor Wilson: It was like a warning sign. But yeah. I mean, it’s, the process doesn’t end really. We’ve still been sort of in it very much so since Sundance, even though the movie was finished, then it just, it goes on.

Scott Menzel: Great. Well, thank you very much. Again, once again, congratulations on the film, had a blast with it and I hope audiences find this movie and it warms their hearts.

Eleanor Wilson: Thank you so much. It was great to talk to you.

Alex Huston Fischer: Thanks so much. Thanks for watching it twice.

Scott Menzel: No problem. Take care. Have a good day. 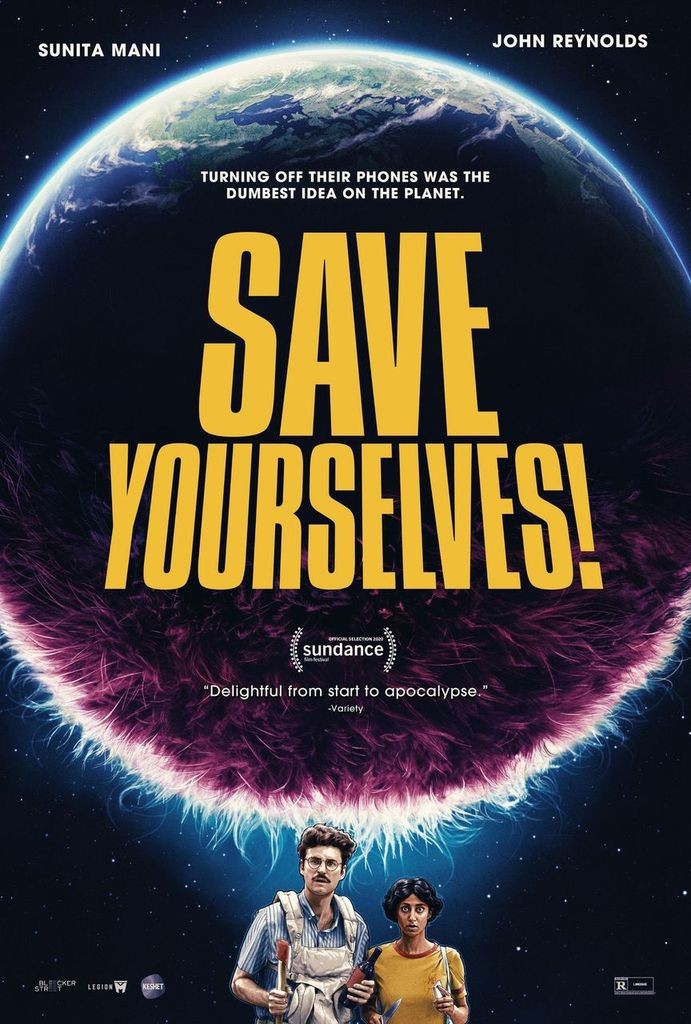 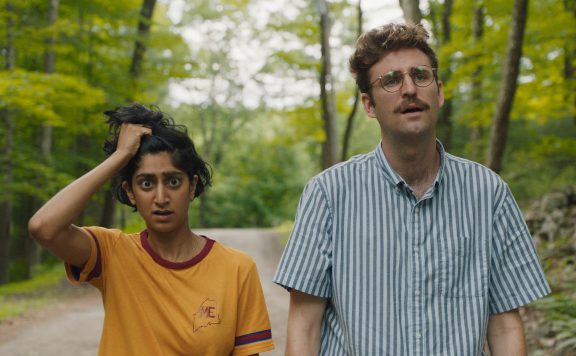 ‘Save Yourselves!’ Review: A quirky sci-fi comedy with a satirical surprise
September 29, 2020

Jack (John Reynolds) and Su (Sunita Mani) are a Brooklyn couple who, like many of their friends, find themselves dependent on technology and unable to put down their phones. Fearing their mindless scrolling may impact their connection with each other, they seize the chance to head to an isolated cabin in the woods, vowing to unplug from the outside world for a week. Sheltered from texts and push notifications, they are blissfully unaware that the planet is under attack. As strange events unfold, the couple must figure out a way back to civilization—or what’s left of it.
0
Average User Rating
0 votes
Please sign in to rate.
Film:Save Yourselves!
Cast:Amy Sedaris, Ben Sinclair, John Early, John Reynolds, Sunita Mani, Zenobia Shroff
Director(s):Alex Huston Fischer, Eleanor Wilson
Writer(s):Alex Huston Fischer, Eleanor Wilson
Genre:Comedy, Sci-Fi
Studio(s):Bleecker Street
MPAA Rating:R