Originally scheduled for release last year but postponed due to the pandemic is the long-awaited MCU prequel Black Widow, which will finally be released in theaters and on Disney+ with Premium Access beginning July 9th. The new film, which takes place between the events of Captain America: Civil War and Avengers: Infinity War, once again stars Oscar-nominee Scarlett Johansson (Jojo Rabbit) as Natasha Romanoff focuses on the former KGB agent’s investigation into a conspiracy that has ties to her past. Directed by Cate Shortland (Berlin Syndrome), the movie also features Florence Pugh (Fighting with My Family) as Yelena Belova, David Harbour (Hellboy) as Alexei Shostakov/Red Guardian, Ray Winstone (Indiana Jones and the Kingdom of the Crystal Skull) as Dreykov, Oscar-winner Rachel Weisz (The Constant Gardner) as Melina Vostokoff, and Oscar-winner William Hurt (The Incredible Hulk) reprising his MCU role as Thaddeus Ross.

We Live Entertainment recently had the pleasure of attending a virtual press conference for Black Widow and other press members. The producer and president of Marvel Studios, Kevin Feige, director Kate Shortland, and actors Scarlett Johansson, Florence Pugh, Rachel Weisz, and David Harbour.

Audiences have been asking for a Black Widow film ever since the character first appeared in Iron Man 2. Still, after her heroic death in Avengers: Endgame, fans began to wonder just when her new solo movie would be set within the MCU timeline. President of Marvel Studios Kevin Feige began the press conference by discussing why they decided to make Black Widow a prequel and set it between Civil War and Infinity War. “We very specifically knew there was a large period of her life that we didn’t know about,” he said. “And not just her childhood, but this period of time between Civil War and Infinity War. That period we felt was ripe to focus on creatively and to be able to discover more about her past and more about her present. And with many of the lovely people you see here today, give a hint at the legacy and the future all at the same time.”

Scarlett Johansson, who has played Natasha Romanoff for over a decade now, talked about the character’s journey throughout the MCU movies and where we’ll find her in her life when this film begins. “Obviously joining S.H.I.E.L.D. and then subsequently the Avengers, I mean she’s always been a part of something that was part of a greater whole,” the actress explained. “Then suddenly she finds herself floating in this weird in-between space, and she’s off her game. She realizes that she’s got all this possibility in front of her, and it’s really suffocating. Then she’s blindsided by this person who comes from her past who is just on fire, is a liability, and has this crazy energy. She is dangerous, full of life, and seems like she isn’t needy but needs her. So, Natasha is thrown off her game in this. It’s great to see her like that. We never get to see her like that. That was a fun place to start from. She’s just full of doubt and leaves a lot of openings for stuff to kind of creep in.”

Florence Pugh portrays Yelena Belova, the second person to hold the mantle of Black Widow in the comics. The actress talked about her approach to playing a role that is so closely connected to the title character. “Well, I think in the script, it was self-evident that they have this connection, and they have this relationship,” Pugh said. “Ultimately, despite her skillset, she is that wonderfully annoying young assistant that says all the right things in all the wrong times. So, that wasn’t hard at all for me to get into that. I think something that I really appreciated was that Cate was so welcoming of me to figure out how she thinks, how she moves, and what she wears. For me, that was such a fun part of figuring out this character because she really comes out of the Red Room life. She can buy her own clothes, and she can buy a vest that has lots of pockets, and she’s really excited about it. I think Cate really encouraged me to find the oddities of her and lean on them. I think being welcomed into it with Scarlett equality being as giving as she was, I found it such a wonderful and creative space. I think that was the overall thing; these two sisters have so much fun together, amongst all of the pain they’ve shared.” 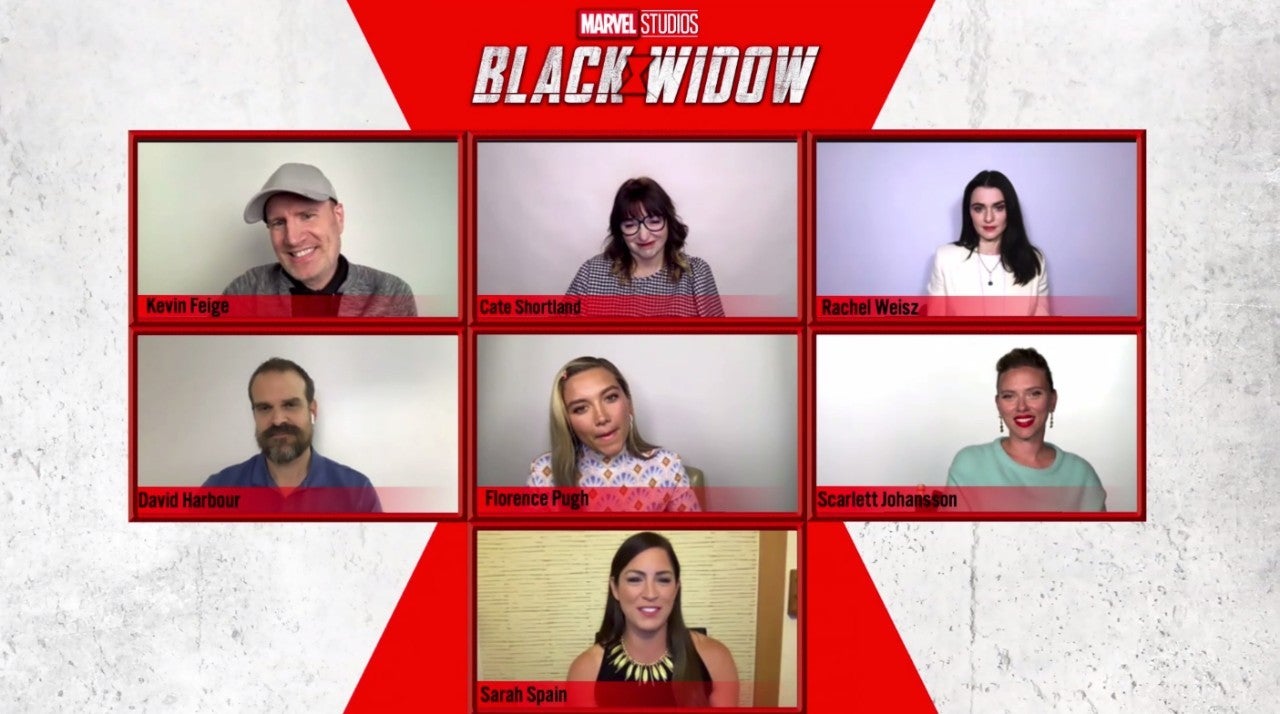 Academy Award-winner Rachel Weisz joins the MCU as Melina Vostokoff, who ties to Natasha and her history in the Red Room. Weisz discussed her character’s arc and what excited her about being part of this project. “I like stories about compilated people, but it was wonderful to tell a story with three strong women,” the actress said.  “Just on the page, I just thought she was a really unusual character. I loved shooting that family scene where the family gets back together in Russia after twenty years. It was just completely a delightful thing. It was really unlike anything I’ve ever done. It felt incredibly intimate and incredibly emotional. I had to steel myself most days to stop laughing at David Harbour because he’s one of the funniest people on this planet. Also, I liked Melina because she has absolutely no sense of humor, like none. What the writers got onto the page and what Cate directed was just very contradictory and highly complex people.”

David Harbour plays Alexei Shostakov/Red Guardian in Black Widow and injects humor into the film. The actor discussed bringing his own brand of comedy to the role. “I mean, the funny thing about him is that the humor hatches from the same egg because he is filled with grief and remorse about the choices that he’s made emotionally, spiritually, and nutritionally,” Harbour explained. “The comedy itself comes out of the ego that is built to defend against the feelings of that remorse. So, in other words, he has to be so bombastic because he can’t stop and feel these things, the failures that he’s made. So, he has to build around him a world of a confabulatory, psychotic reality where he is the real hero. I mean, that’s inherently funny. Also, the family dynamics themselves are just so fun because of what I found developing too. There’s almost a traditional shot, which I feel is the perfect image for this movie. It’s of all of us around a table in these particular positions, which I remember talking about that day that we shot it. We’re all in super-suits, but you have this almost Norman Rockwell thing of like a dad coming in last to sit at the head of the table while his eldest child sits here, and mother and babysit over here. I found us all sort of falling into these traditional cliché roles and then riffing off of that. That was like really fun and satisfying as well.”

With an unusual blend of intense action sequences and deep family drama, director Cate Shortland talked about the challenges of balancing the film’s action with its emotional core. “From the beginning, when we spoke about the film, we knew that it had to speak to two things,” the filmmaker explained. “That was Natasha as an individual, and then what had happened to her and who she was at the beginning of the film, which was she was completely alone. Then we knew as well that I wanted it to be enjoyable and that it should be like a fairground ride, so really exhilarating. I suppose we just thought we wanted it to be both, but we wanted it to be raw and that those things would seamlessly mesh together. So, it was always like putting her at the center of it but making sure that we didn’t let the trauma of her past drag it down.”

With so many actors joining the MCU for this project, Johansson talked about the joys of welcoming new people to the Marvel Universe. “It’s exciting because I’m partial,” she joked. “I love our Marvel family, and I know how special it is, and how special the experience is making these films. So, I’m just excited for other actors to come in because I hope they feel similarly. It’s wonderful to see people come into something with excitement and get to experience the incredible world of Marvel and making these huge productions. I mean, we all have been part of big productions before, but I think because Marvel feels so familiar, there’s something about it that’s just a very unique, warm, and inviting place. It’s a fun thing to share, and it was exciting to see everybody experience that for the first time.”

Before the press conference was over, a journalist from another outlet asked Harbour who he would like to see Red Guardian team up with in a future MCU film. “Who’d I like to team up with? I mean, none of them,” the actor joked. “I consider myself so extraordinary, so above all their mere pedestrian powers. I don’t know if it’s team-up, but I really love the Falcon character. I love Anthony Mackie just as an actor too. Now that he’s wearing the Captain America suit, Alexei has a certain amount of complexity with Captain America in general, whoever wears the suit. He hates that guy, and he hates what he represents. I mean, some of the funniest stuff to me in the film is where he says that the original Captain America was actually a colleague of his. So, we had a lot of respect for each other.” Weisz also added that she would like to see a team-up between Melina and the Hulk.

Finally, a different journalist from another outlet asked Kevin Feige if he foresees more solo films for established MCU characters in the future. “Well, certainly this film and this story is a particular case for Natasha,” he explained. “But the notion of exploring the past, present, and future of the MCU is certainly in the cards for all of our characters. This particular story with this cast is very personal and very specific to Natasha.”

Black Widow opens in theaters on Friday, July 9, and is available to rent on on Disney+ with Premium Access the same day 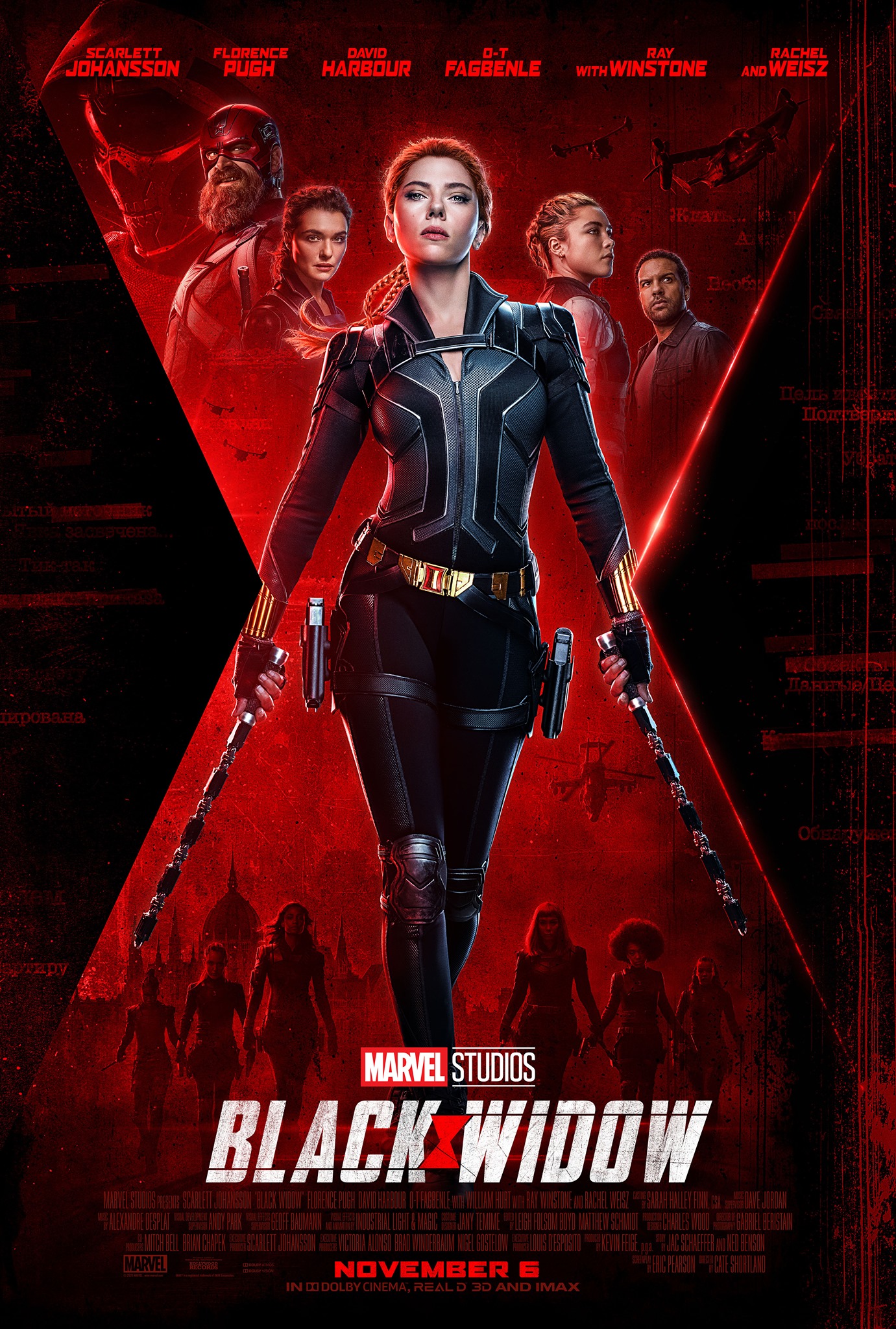 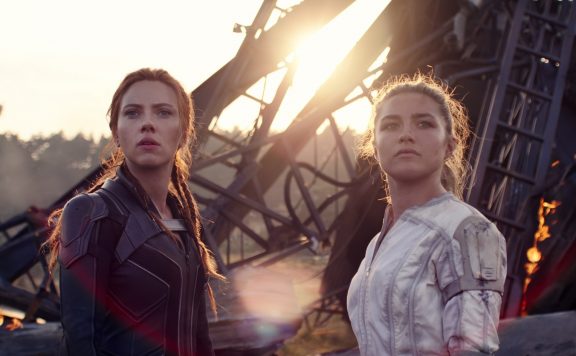 Natasha Romanoff, aka Black Widow, confronts the darker parts of her ledger when a dangerous conspiracy with ties to her past arises. Pursued by a force that will stop at nothing to bring her down, Natasha must deal with her history as a spy, and the broken relationships left in her wake long before she became an Avenger.
0
Average User Rating
0 votes
Please sign in to rate.
Film:Black Widow
Cast:David Harbour, Florence Pugh, Olga Kurylenko, Rachel Weisz, Scarlett Johansson, William Hurt, Yolanda Lynes
Director(s):Cate Shortland
Writer(s):Jac Schaeffer, Ned Benson
Genre:Action, Adventure, Superhero
Studio(s):Marvel Studios, Walt Disney Pictures
MPAA Rating:PG-13