Scheduled for release in theaters and on Disney+ beginning, March 12th is the new animated movie Raya and the Last Dragon. Directed by Don Hall (Big Hero 6) and Carlos Lopez Estrada (Blindspotting) and written by Qui Nguyen (Dispatches from Elsewhere) and Adele Lim (Crazy Rich Asians), the film stars Kelly Marie Tran (Star Wars: The Last Jedi) as Raya, a fearless warrior princess, and Awkwafina (The Farewell) as her companion Sisu, the last dragon in existence. We Live Entertainment recently had the pleasure of screening twenty-five minutes of the new film and then attended a virtual press conference with Hall, Estrada, Nguyen, Lim, and producer Osnat Shurer (Moana).

While we were warned that some of the footage wasn’t complete, it looked excellent and seemed to be release ready. The animation was gorgeous, and the film was a mix of action and adventure with classic Disney animated comedy. The first scene featured Raya in a post-apocalyptic world, then flashes back to show us how this world came to be. It is explained that five-hundred years ago, dragons and humans lived in peace until they were attacked by creatures called the Druun, which turn humans into stone. The Druun are defeated by the dragons, who sacrifice themselves to save the humans by using the mysterious Dragon Gem. Generations later, when Raya is a young girl, her father is tasked with guarding the gem. Another girl named Namaari soon befriends Raya to betray her quickly and attempt to steal the gem for herself. During a battle to protect it, the gem is broken into several different pieces, which releases the Druun once again. Before he is turned to stone, Raya’s father gives her a piece of the gem and tells her to use it to save humanity.

Six years later, Raya has dedicated her life to protecting the gem piece and finding the last surviving dragon in hopes that they can use what’s left of the gem to defeat the Druun. Raya eventually finds Sisu, the last of the dragons, an excellent swimmer and can also take human form. To defeat the Druun, Raya and Sisu will have to find all the gem pieces and reassemble them to save humankind, while Namaari and her soldiers are also in pursuit. On their journey, Raya and Sisu join forces with a group of new friends that includes a creature named Tudka, an infant con-artist named Baby Noi, and the powerful warrior Tong.

It had already been announced that Kelly Marie Tran and Awkwafina would be voicing the two title characters. Still, the filmmakers also revealed the rest of the voice cast, which includes Gemma Chan (Captain Marvel) as Namaari, Benedict Wong (Doctor Strange) as Tong, Alan Tudyk (Rogue One: A Star Wars Story) as Tudka, and Daniel Dae Kim (Lost) as Chief Benja, Raya’s father.  The filmmakers talked about their casting choices, starting with Kelly Marie Tran. “I think Kelly brings the humanity that we were looking for in Raya,” co-director Carlos Lopez Estrada said. “She brings the humor that we were looking for. She brings the badass-ness that this character needed and just an incredible acting range. You’ll see Raya go through it all in this movie.”

“Awkwafina as Sisu was incredible,” co-director Don Hall continued. “We obviously knew that she could do both drama and comedy. But it was extraordinary working with her, and her ability to improvise was like another world. We got so much material, but we could only keep a little bit of it in the film. But every recording session with Awkwafina was just a party. It was just so much fun. She was having fun, and we were having fun. And, with what she brought to that character, I think Sisu’s going to have a special place in the Disney pantheon of characters. I can’t say enough good things about Awkwafina.”

“I’ll speak to Daniel Dae Kim as Benja, Raya’s father,” added co-writer Adele Kim. “We really wanted somebody you could feel that warmth and compassion with and yet that sense of authority. Within our community of Asian Americans in the United States, Daniel Dae Kim has done so much in terms of really promoting visibility for underrepresented people. Just him as a human being with so much warmth, but again, you feel that strife. It was just such a great piece of casting for us.”

“I’ll pick it up with Gemma,” said co-writer Qui Nguyen. “She plays our antagonist, Namaari. When we were crafting this character, it was a character that we knew was going to be a bad guy that had to be Raya’s equal in every way. But also, I always think the best bad guy is one that you understand and that you have sympathy for. Strangely, you want to see them turn. With Gemma, she worked with that kind of nuance and subtlety to show the pain of what Namaari was going through. That feeling was always there, and it was a hard tightrope to be on, but she did it wonderfully.”

“We should mention Benedict Wong as Tong,” Hall added. “He is such a force of nature, and he’s elemental in his power. Every recording session with Benedict was so much fun watching him become the character and how he physicalizes his performance and never wears down. He never gets tired and gives you a different version with each take. In fact, we generally had to stop him, or he would still be going now.”

The filmmakers, who due to Covid-19, were forced to finish animation and post-production from their homes, also discussed their research into Southeast Asian culture and how it informed the film’s making. “It’s a really organic process,” explained producer Osnat Shurer. “We met many people as we were preparing for the research trips, met some people on the research trips, and found commonalities with many people. We had linguists who worked with us. Every name that we put in the movie went through an Indonesian linguist from UCLA who speaks many languages of the region. The cultural in-conversation was going on during the writing of the script and continued to go on throughout the film’s creation and continues to this day. So, it’s an ongoing conversation. It grows somehow organically through the specific research needs of each film.”

When asked if Raya is a “new kind of Disney Princess,” both directors answered yes. “If you think about Raya in context with the rest of the movies from Disney, it makes sense,” explained Estrada. “But, it also just stands out in a way that it is just super-exciting. I feel like she is going to be unlike any Disney heroine you’ve ever seen before, and I am so proud of that.”

Finally, Hall addressed similarities between Awkwafina’s voice performance as Sisu and the iconic voice performance of the late Robin Williams as the Genie in Aladdin. “I think the Robin Williams comparison is not a bad one, actually,” he said. “It’s hard to imagine another actor performing the role of the Genie in the original Aladdin. It was sort of tailor-made for Robin Williams’ specific gifts. I feel like we did the same thing with Sisu. She was written with Awkwafina in mind, and I can’t imagine somebody else as Sisu. Awkwafina is Sisu, and Sisu is Awkwafina!”

Raya and the Last Dragon is scheduled for release in theaters and on Disney+ beginning March 12th. 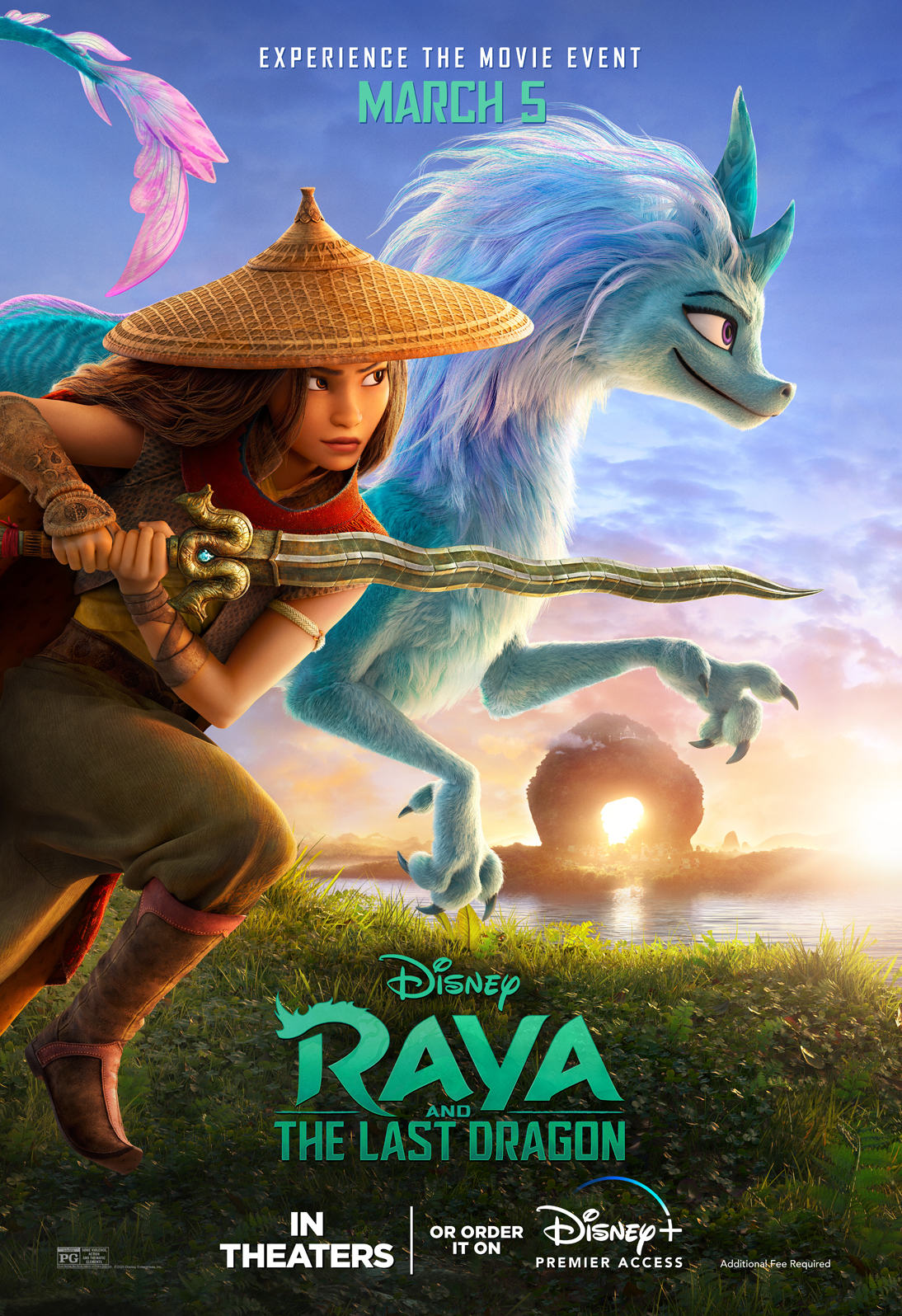 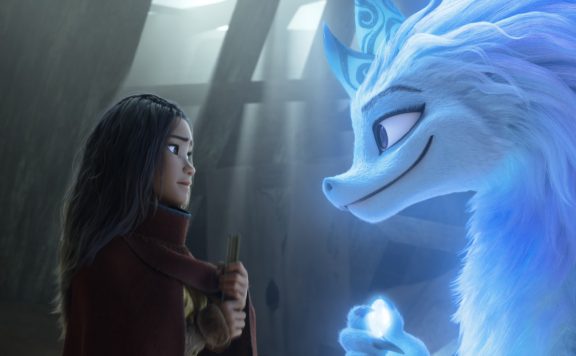 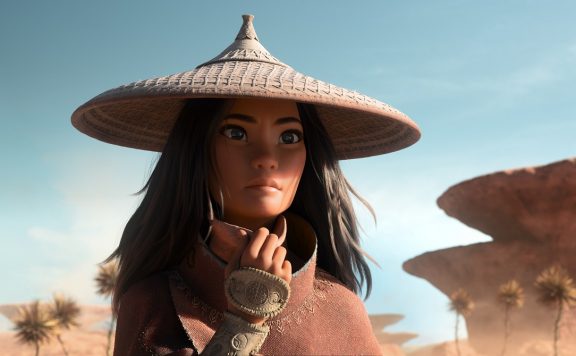 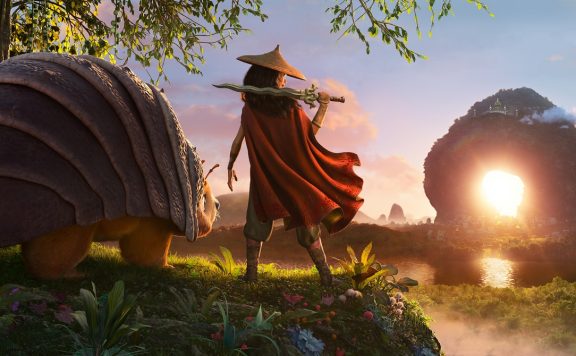 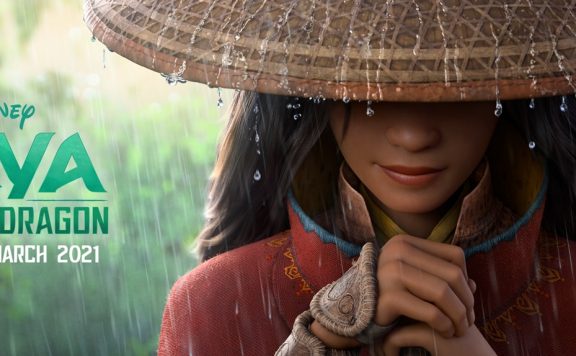