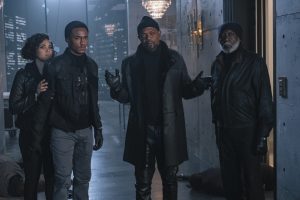 Who’s the white film critic who respects women more than this flick? Fred! Shaft was a pivotal role model in 1971. He was the most prominent African-American movie action hero. He was a ladies man for sure, and he wasn’t exactly monogamous, but if he was ever sexist he wasn’t a misogynist. He loved women. 2000’s Shaft may have watered down the sex machine for all the chicks as a post-‘90s studios movie. 2019’s Shaft is about the difference between an ‘80s Shaft and a millennial Shaft but it seems to think hyper toxic masculinity should be celebrated. 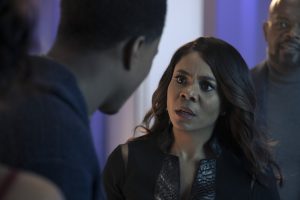 In a flashback to 1989, when John Shaft (Samuel L. Jackson) gets in a shootout set to the Isaac Hayes Shaft theme, it suggests the electric action movie this could have been. Shaft and Maya (Regina Hall) had a newborn in 1989, so JJ (Jesse T. Usher) is 30 today. John has been an absent dad. He’s not just outdated, he is oblivious to what kind of birthday gifts to get a child, like he’s a character in an Adam Sandler movie.

Whenever they wait too long for a sequel, they forget who the characters even are. Between Dumb and Dumber and Dumb and Dumber To, Harry and Lloyd became assholes, not just innocent idiots. It only took three years for Now You See Me to forget who all their characters were, but 19 years did a number on Jackson’s Shaft. He was a badass who didn’t obey authority in 2000. Now he’s a raging homophobic, Islamophobic misogynist. Jackson waited 19 years to play John Shaft again. Doesn’t he care that this is who he became?

So FBI data analyst JJ needs his father’s help with a case that involves drugs in Harlem. There’s naked boobies waiting in John’s office when JJ arrives (perhaps the only accurate homage to the ‘70s trilogy). Fathers and sons give this a very Last Crusade vibe but John Shaft was more than just negligent and obsessed with work. John complains that JJ thinks too much, because of course acting out with violence always ends so well, especially in law enforcement.

John panics that JJ is involved with an organization called Brothers Watching Brothers. This is a military veteran outreach program that supports veterans when the V.A. falls short, but God forbid any man be gay! And John is outraged that JJ won’t talk about pussy with him. Who the fuck ever wants to talk about their sex life with their dad? No one, not millennials nor boys in the ‘70s, would want to talk about pussy with their father. For good measure, J.J.’s boss (Titus Welliver) at the FBI is transphobic too. There’s no reason to announce that he has a daughter who wants to be called Frank, but Shaft has time for him to misgender his trans son.

JJ’s friend was Karim and was involved with a mosque so John breaks out his Arab stereotypes. He also makes the innuendo of a teenager, talking about pulling out when a military veteran is talking about how Karim pulled away. You can be funny making immature innuendo, but Beavis and Butt-Head were clever about it. John Shaft is now.

Jackson’s bravado is magnetic. I can see the appeal of letting Jackson’ loose in a character who doesn’t give a fuck what anyone thinks of him. I just wish audiences demanded he be more than just an asshole. This could be the ultimate stick it to the man role model. He could be funny, cool and right. I guess two out of three ain’t bad, but it’s not good enough.

I mean, there are white action heroes who are assholes. John McClane is a total asshole, but he’s not homophobic. He was sexist, but that was his journey in Die Hard to see his wife as an equal. Dirty Harry certainly had some outdated views, although they’ve never tried to update him. Even he was shown to be problematic, and his very first sequel confronted him with cops who embodied his ideals a little too much for even Harry’s comfort. John learns a tiny bit of humility which I guess is progress. 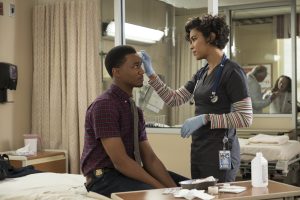 JJ is charming. He’s smart and shows how he can work around the macho, aggressive hierarchy. He can also handle himself physically. He knows capoeira. He just hates guns, although he’s capable of using them too. The movie shows that J.J. finally becomes manly when he shoots the bad guys. This is a movie by black screenwriters and a black director. I’m surprised if anyone in Hollywood is pro gun, and I think even the John Wick movies make it clear that they’re not realistically portraying guns, but I especially wouldn’t expect it from filmmakers who represent a community so plagued by gang and police violence.

Sasha (Alexandra Schipp), JJ and Karim’s nurse friend, calls out John Shaft as an absentee dad. She’s right. Who is John to talk about what a man should be? The film undermines her by making her swoon when exposed to violence, let alone when she becomes a damsel in distress who needs the violent men to save her. 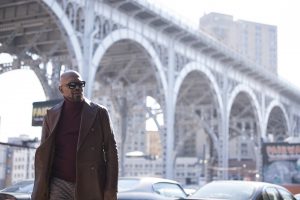 I have a theory how this happened. Kenya Barris and Alex Barnow are credited screenwriters. I suspect Barris, or maybe even both writers, wrote a script calling out the toxicity of the Shaft archetype. Tim Story, and maybe even Samuel L. Jackson, didn’t get it and thought Sasha and J.J. were the villains. Or maybe they just didn’t think and now that Shaft is screening, smart people are identifying what it’s actually saying.

The dialogue does seem to come from sitcom writers though. There are very banal setups and punchlines waiting for a laugh track. Maya calls John “someone who destroys everything he touches and never goes away” Her date replies, “Oh, a contractor?” Get it! Because contractors suck! And also airplane food tastes bad and men always leave the toilet seat up! 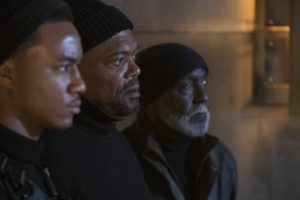 I kept hoping the movie was ending but then I realized Richard Roundtree hadn’t shown up year and my heart sank. This movie even forgot Roundtree’s relationship to John. He was Uncle John in Shaft 2000. Now they say he’s John’s dad. I mean, would it have been too hard to check the DVD of Shaft 2000? Sam was in both movies… This movie also thinks the previous Shaft was in 2001 so that’s the level of research they devoted to their own franchise. At least when all three Shafts save the day, it can finally end.