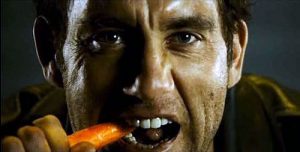 I must’ve spent the first 30 years of my moviegoing life looking for the greatest thrill. For a while, Arnold Schwarzenegger was my most reliable resource, along with some of his big studio brethren like Die Hard and Indiana Jones. I started exploring Hong Kong cinema thanks to John Woo and Jackie Chan and discovered a new world of cinema that didn’t play by Hollywood rules of what you could do in a movie, so they pushed me even further. When I first saw scenes from Shoot ‘Em Up, I found my soul mate. 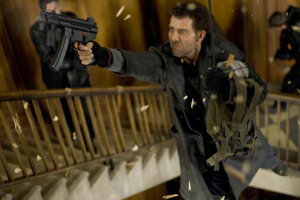 Writer/director Michael Davis got it. He knew that action should be about the most awesome thing you could imagine, unrestrained by real world physics. This is a movie. It doesn’t have to play by the rules. Shoot ‘Em Up does have its own internal logic. It asks you to agree that a gunshot can manipulate anything in the environment to create cause and effect chain reactions, and also that Smith (Clive Owen) will never miss a shot. Your reward for agreeing to those rules is a film full of the most imaginative action sequences ever conceived. As you know, my only rule is “because it’s awesome,” and Michael Davis wins my support with every scene in Shoot ‘Em Up. 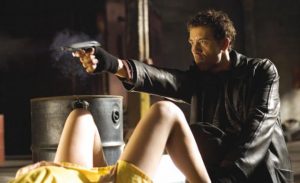 Since I still want people to discover Shoot ‘Em Up I’ll try to keep my spoilers minimal, although describing it still can’t equal seeing it before your own eyes. But you can tell Davis has no limits when he opens the film with a gunfight during childbirth. A prime example of the movie’s internal logic is shooting the umbilical cord. I’d have to ask a doctor if that’s medically sound but I’m willing to believe it cauterized the wound and everything’s fine. Other noteworthy sequences include a skydiving shootout (even the Point Break remake didn’t go there) and a love scene shootout (that warrants a whole paragraph later.) If that’s enough to sell you, and it damn well should be, then stop right here and go watch Shoot ‘Em Up. 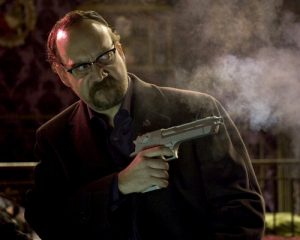 Smith ends up protecting the baby from Hertz (Paul Giamatti) which means carrying it through a lot of firefights. Smith ultimately uncovers the plot, and it’s a fine conspiracy on which to hang these action sequences. We’ve accepted far less for far more basic action (You killed my brother, now I’m coming for you; we’ve gotta stop the bad guy from getting this thing/get back the thing they stole, etc.) Smith is the classic reluctant hero though. He would stay out of it but can’t let a pregnant woman and her baby get killed. The way Davis reveals this is so visual, we get all the motivation without exposition.

I knew Davis was my soul mate when I saw the way he staged action. Smith runs an obstacle course of his own making around the bad guys. Smith carves his own path but the editing shows Smith’s plan. You want to see a sliding John Woo pose? Let Smith give himself a slick to slide on. Need to jump over something? Watch Smith make himself a ramp. 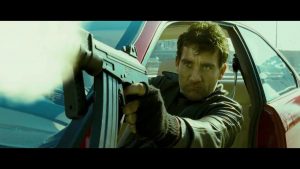 Actually, I knew it when Davis thought of a scene I’d always imagined when I was a young writer. Smith crashes his car into a van to launch himself at the bad guys. Of course in the world of Shoot ‘Em Up, he lands with not so much as a hint of whiplash and quickly turns around to take out the van load of henchmen. I always believed in movie heroes being tougher than mere mortals. Perhaps that’s why Sam Raimi appealed to me so much too. Davis showed me the scene straight out of my childhood soul. He didn’t even have to say hello. He had me at Clive Owen launching himself through a windshield. How he gets into that car in the first place is a doozy too. The first kill tells you anything is fair game with an unorthodox stab. Every shoot out makes use of every aspect of the environment, be it a bathroom air dryer, file cabinets or a fireplace.

Movies should be about the most creative thing you can imagine and Shoot ‘Em Up certainly is. I like to say making sense is the death of creativity because as soon as you say “nope, he couldn’t survive that fall” or “sorry, that shot wouldn’t be possible from that position” you’re limiting yourself. We ran into this problem a lot after The Matrix. The Matrix justified Hong Kong wire work and gunplay by saying it was a simulation where they were intentionally bending physics. Then Jet Li or Charlie’s Angels did it and I heard viewers say, “Wait a minute, you’re not IN the matrix.” I say yes, they are. Every movie is a matrix. It’s all pretend and manipulated. I feel like other cultures embrace this more, certainly Hong Kong and Bollywood too with their melodrama and musical breaks.

There are perfectly great movies that employ a realistic approach to action but it should not be a given. Every filmmaker can establish the rules of his or her own film. Also, remember a lot of the so-called realistic movies are full of shit too so don’t hold those cows too sacred. Jason Bourne can’t really jump through a window without slashing his throat, but it’s fine if they want to say he’s using real special ops tactics for his franchise.

So there is a gunfight love scene in Shoot ‘Em Up. Four years later there was another gunfight sex scene in Drive Angry. Screenwriter Todd Farmer and director Patrick Lussier said at the press junket they wrote Drive Angry before Shoot ‘Em Up came out. It’s possible great minds thought alike but you can also see how Shoot ‘Em Up gets it and Drive Angry was just going for shocks. In Shoot ‘Em Up, Smith is protecting Donna Quintano (Monica Bellucci) and spinning her out of harm’s way. Also Cage keeps his clothes on in his scene. They make a joke about it but it shows Drive Angry is exploiting the woman in the scenario. She may be a good sport but Shoot ‘Em Up respected it’s characters and made them awesome in a compromising scenario. 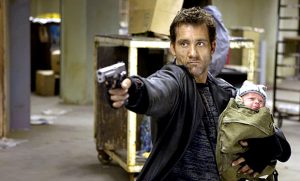 The one liners are full on Schwarzenegger, only the kills are so outrageous the lines are even funnier. The film is also peppered with social commentary, Smith taking a stand against rude douchebags and giving them a satisfying comeuppance. Davis observes many of the cliches of action movies (one man against an army, Mexican standoff) and has fun at their expense while indulging in the best of them. Davis has good taste in music too. Setting gunfights to Nirvana, Motörhead to AC/DC understands the rhythm of both the music and the action.

It’s also brilliant that Davis never confirms Smith’s true backstory. Hertz keeps guessing any assortment of stereotypical screenwriter backstories (probably another comment on Davis’s part) but Smith never confirms. He can literally be a different person for you every time you watch the movie. 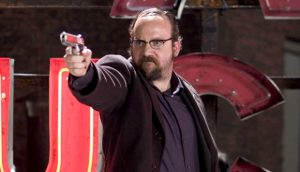 Giamatti once told me the script for a sequel was even better. It was called Punch ‘Em Out implying a similar brand of inventive action with fist fights instead of guns. More than anything Franchise Fred would approve this. Davis has not made a movie since, although I would also recommend his raunchy rom-coms 100 Girls and 100 Women. Those spoke to my hopeless romantic side. I do hope my soul mate makes another film, in any genre, but we’ll always have Shoot ‘Em Up.