I’m just not into Illumination movies. I gave them five chances. I didn’t hate Sing as much as The Secret Life of Pets or the Despicable Me movies, but by now it’s clear. This is all they do. The movies make a fortune. Why should they change? 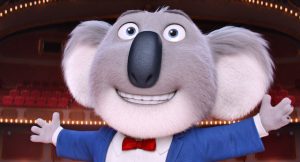 A koala bear named Buster Moon (Matthew McConaughey) runs a failing theater. He holds auditions for one last musical to hopefully save the theater. Through comic shenanigans, the flyer is misprinted with a $100,000 prize, leading to a jam packed audition. Buster picks the unlikeliest combination of animals to sing pop songs and learn choreography for him.

Sing is a tad easier to sit through because it is a basic story that tracks. Buster is a fraud who will ultimately have to make good, and he’s got a lesson to learn. Most of the performers are aspiring singers, so they’ve got their basic journeys through learning the actual craft until they get to perform and be discovered. 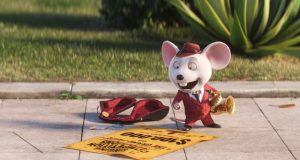 Except for the mafia mouse (Seth MacFarlane) who’s doing it for money. The story makes sense. It’s just boring, as opposed to previous movies that plug and played Pixar formula as if they didn’t actually understand why Pixar movies work.

It takes a long time for Sing to work itself out. Since they knew the entire third act would be the performance, they should have really sped up the formula to get there. You could cut out the whole $100,000 subplot since every single character seems to want to be a singer anyway. It could just be an animated Fame. It could just be putting on a show to save the theater. It could pick one thing and do it well, or at least better. 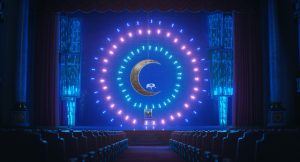 There is some impressive animation in Sing, as in scenes that I imagined were very hard to do. Crowds of cheering, dancing animals must be difficult. Animating a gorilla playing piano or porcupine playing guitar, and assuming it’s accurate, must be hard. All the stage mishaps of crumbling equipment, frantic ADD pig children and Buster’s busy antics must have been time consuming. Squid lights are pretty.

A few things got a giggle out of me. Ash (Reese Witherspoon in a Mud reunion for the kids!) shooting quills was funny. The Japanese girl pop group was cute. The koala bear car wash was just so bizarre, if they’d focused the whole movie on bizarre animal gags they might have had something. 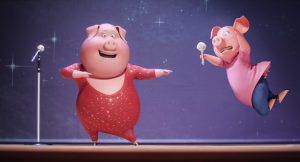 The usual stuff made me groan. Yes, a flamboyant pig wearing a glitter onesie singing Lady Gaga… can you believe a pig dressed like that and sang that song? A pig! Bunnies do Sir Mix-a-Lot. Actually, when the jazz mouse steals a poor asthmatic animal’s money, that felt overly aggressive. It really bothered me.

I should be grateful the music wasn’t all current pop. For every Taylor Swift, there’s an Elton John and of course MacFarlane has to sing Sinatra. None of them are clever covers though, and the medley of audition snippets got very tiring. I’m impressed they paid for “Happy Birthday.” They can afford the rights with Minion money! 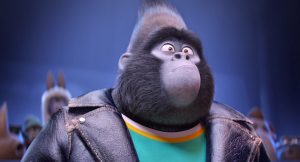 Every movie has a different aesthetic, but since there was already another brilliant animal movie this year, this could be a teachable moment about why Zootopia works and Sing does not. Not every kids movie has to be a metaphor for racism, but there are brilliant artists and technicians working on these movies. They can at least try things.

Zootopia played with animal scale so that midsized animals could be dwarfed by giant animals or be giants themselves in a rodent community. Sing does have elephants and bears that are bigger than bunnies and mice, but they all fit in a uniform scale to make the world easier. Zootopia also limited itself to one pop music set piece, and it was an original. The subplots they scrapped from Zootopia were more inventive than Sing.

I’m just not into Illumination movies. I gave them five chances. I didn’t hate Sing as much as The Secret Life of Pets or the Despicable Me movies, but by now it’s clear. This is all they do. The movies make a fortune. Why should they chang...
0
Average User Rating
0 votes
Please sign in to rate.