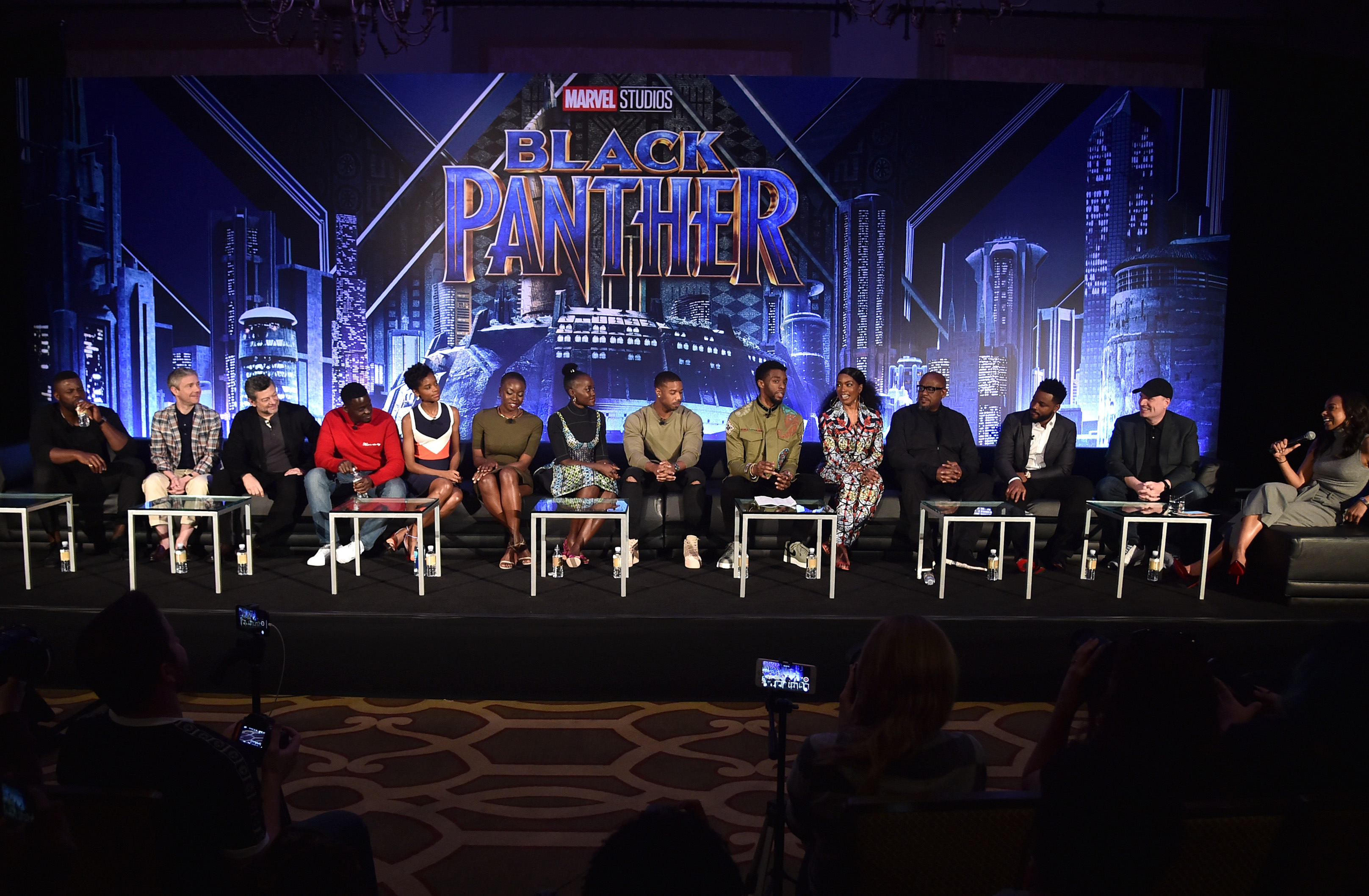 Six Questions and Answers with the Cast of Black Panther

Black Panther was one of my most anticipated films of 2018 and with that being said, Ryan Coogler directed film surprisingly surpassed my expectations in every way. In fact, three of us at We Live Entertainment reviewed the film and each one of us adored it. You can read one or all of our reviews by clicking on the links below:

“Black Panther” Review: All Hail the King by Ashley Menzel 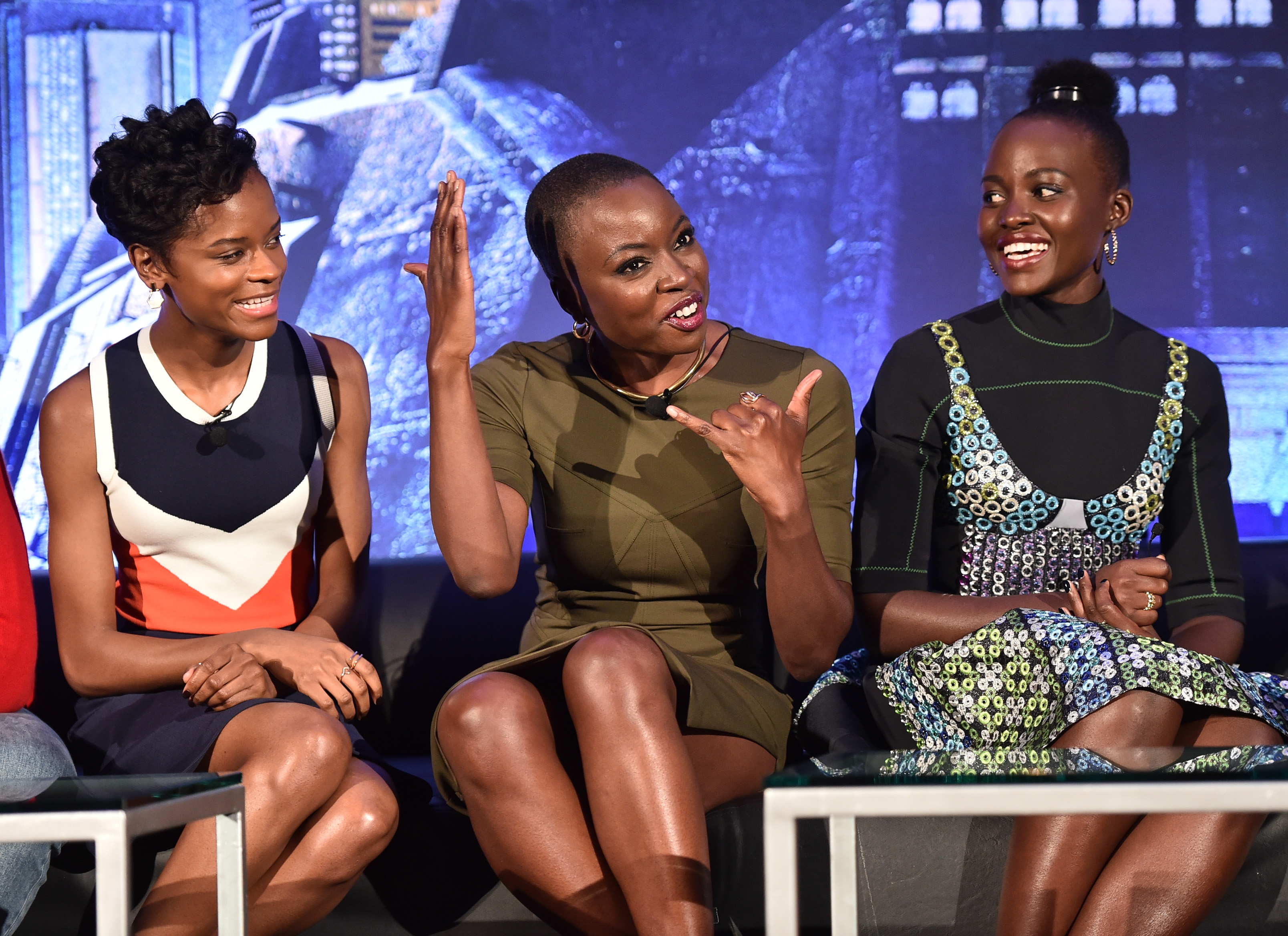 6. Ryan Coogler response to being asked how he felt about the film after attending the premiere and seeing the crowd’s reaction.

Oh, man, I just felt incredibly blessed to have had the opportunity to make the film this way, to make the film with this studio, working with Kevin and his team – Victoria Alonso, Louis D’Esposito, and Nate Moore has been an incredible opportunity.  And it’s not something I ever imagined would happen.  And it’s good to work with my mentor and these people who I’ve watched for my whole life, and some friends that I’ve made through this process.  It was incredible, when I had like 50 of my family members there, all from the Bay area; they were like, talking at the screen.  ‘Heh-heh-heh-heh’.

5. When Danai Gurira was asked about being a fully developed female character, Gurira responded with:

4.  When asked about the way that Wakanda looked in their mind vs how it looked in the film, Michael B. Jordan and Danai Gurira stated:

I gave them a chance to look at some of the concept art pretty earlier on and the photos and the graphic art and what not.  Nothing could have prepared us for what we saw.  We got a little glimpse of it, but to actually see it on-screen fully rendered and the completed project it was incredible and mind-blowing and was really cool to look at – Michael B. Jordan

I think what was really fascinating and very emotional for me being that I’m Zimbabwean and being that something that you always kind of want, you see the power and the potential of where you’re from, but you see how skewed it’s viewed by the world and how misrepresented it is and how distorted it is or received by the world so often. It’s kind of a salve to those wounds to see this world brought to life this way and to see all the potential and power of all of the different African culturalisms and aspects of our being that was celebrated and it’s so different.  It’s a birth of things that we’ve been seeing forever around the continent that we see when we’re there.  We see beauty, we see power, we see potential, we see ability, we see resources, but they are never exhibited and then to put it on sort of a Marvel epic scale of exhibition it’s like, it really salves wounds in a really deep way. – Danai Gurira 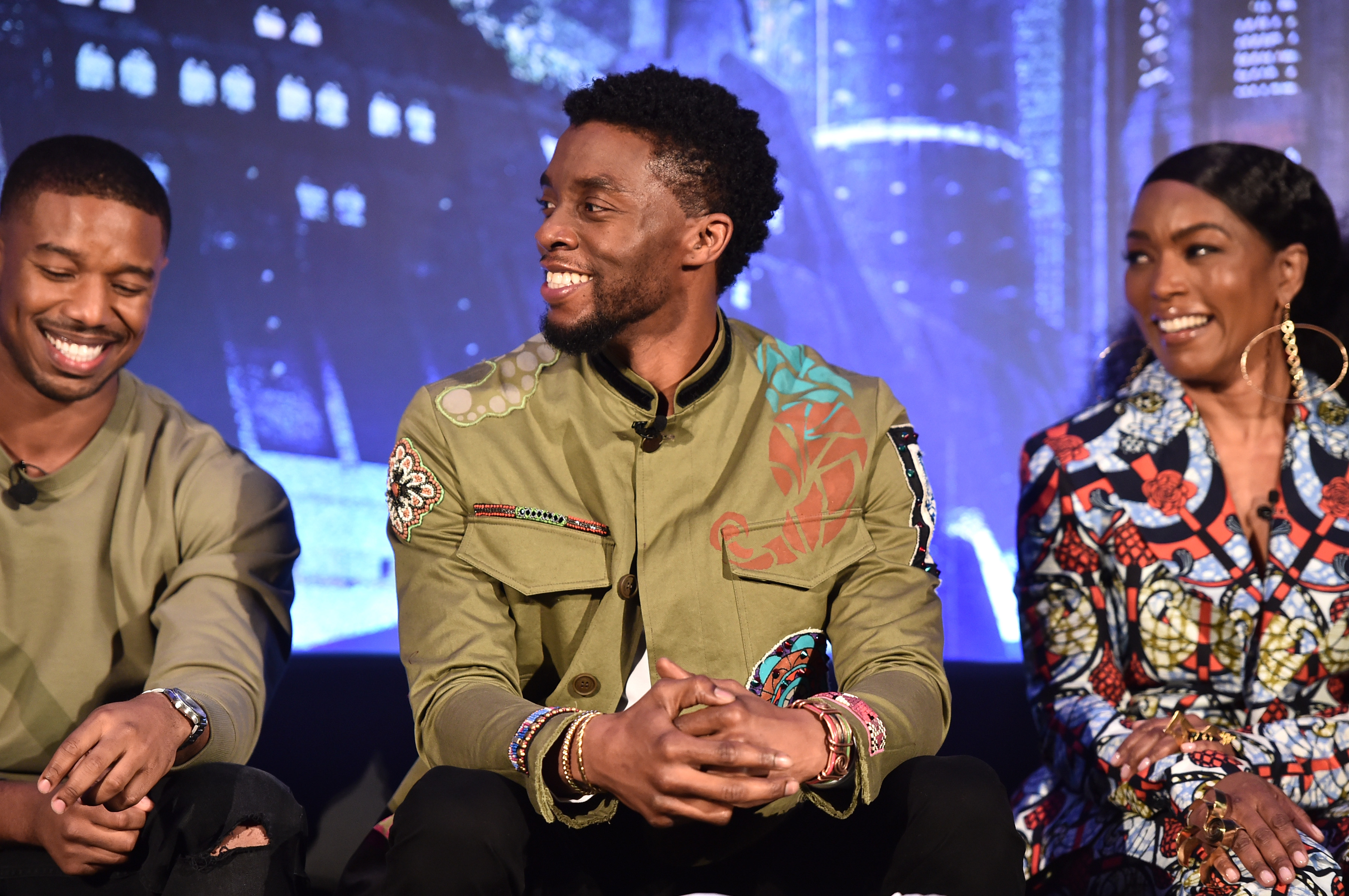 3. Ryan Coogler was asked about which Black Panther comics were used to create the film. He responded with:

We actually pulled from all of them.  You can go to our film and see something in there probably from every writer that has ever touched T’Challa’s character in the Black Panther comics. Stanley and Jack Kirby’s initial run through Don McGregor, Christopher Priest, Jonathan Hickman, and it’s on East Coast Black Age of Comics and Brian Stelfreeze’s run was a big part of it as well so we just kind of grabbed from all.  The characters got a long history and it’s such a rich stuff to me.  And each kind of writer kind of left their own mark on it like Claude’s been around for a long time.  But you know Agent Ross was about Christopher Priest and that run and Suri’s character was about Reginald Hudlin and his run, so each run kind of leaves something for us to pull from but we pulled from absolutely all of them.

2. Chadwick Boseman was asked to talk about how important it was for Black Panther to have an African accent. This is what he had to say about it:

I think as actors this is separate from the movie, but you’re trained very often from a European perspective. What is considered great or classical is very often British and it’s certain writers and I happen to come from a background that does not believe that, you know?  I went to Oxford to study, but I went to Howard and we were taught to respect our writers and our classics just as much and believe that it takes the same skill level and same technique and sometimes techniques that are a little bit different to pull that off.  And so I think you have to be, you have to tell the stories and be true to yourself as an artist.  And in this there’s no reason, you know, for it because there was a time period where people were asking me questions about whether or not an audience could sit through a movie with a lead character who spoke with that accent, you know.  And it was not Kevin by the way, so just making sure you know that. People outside Marvel as well and so I became adamant about the fact that that is not true.  That the intonations and melodies inside an African accent are just as classical as a British one or a European one and that all of the emotions and aspects of a character can be shown and expressions can be shown through that accent and we have to take this opportunity to show that and he just wouldn’t, if he had never been conquered, if his ancestors had never been conquered and he’s never been conquered and Wakanda is what it is, he doesn’t have to go to Oxford to study.  He doesn’t have to go to Cambridge or Yale or any place to study.  He actually got his education at home and he would not then assimilate a language that is the colonizer’s language in order to speak to his people.  So he had to speak with an African accent.

1.When asked what the cast and crew wanted audiences to take away from Black Panther, Lupita Nyong’o had a lot to say about it.

I would say what I love about the way this film represents women is that each and every one of us is an individual, unique and we all have our own sense of power and our own agency and we hold our own space without being pitted against each other. And I think that’s a very, very powerful message to send to children, both male and female this idea. I think often times in movies we fall into that trap where women, there’s very few of us and then we are against each other. There’s a competitive spirit and stuff like that and this film freezes all that. And we see women going about their business and supporting each other, even arguing with each other, you know; having different points of view, but still not being against each other and I think that’s extremely important and in so doing the fact that in this film there’s so many of us, we really get a sense of the fabric of Wakanda as a nation and we see women along side men and we see how much more effective a society can be if they allow women to explore their full potential. 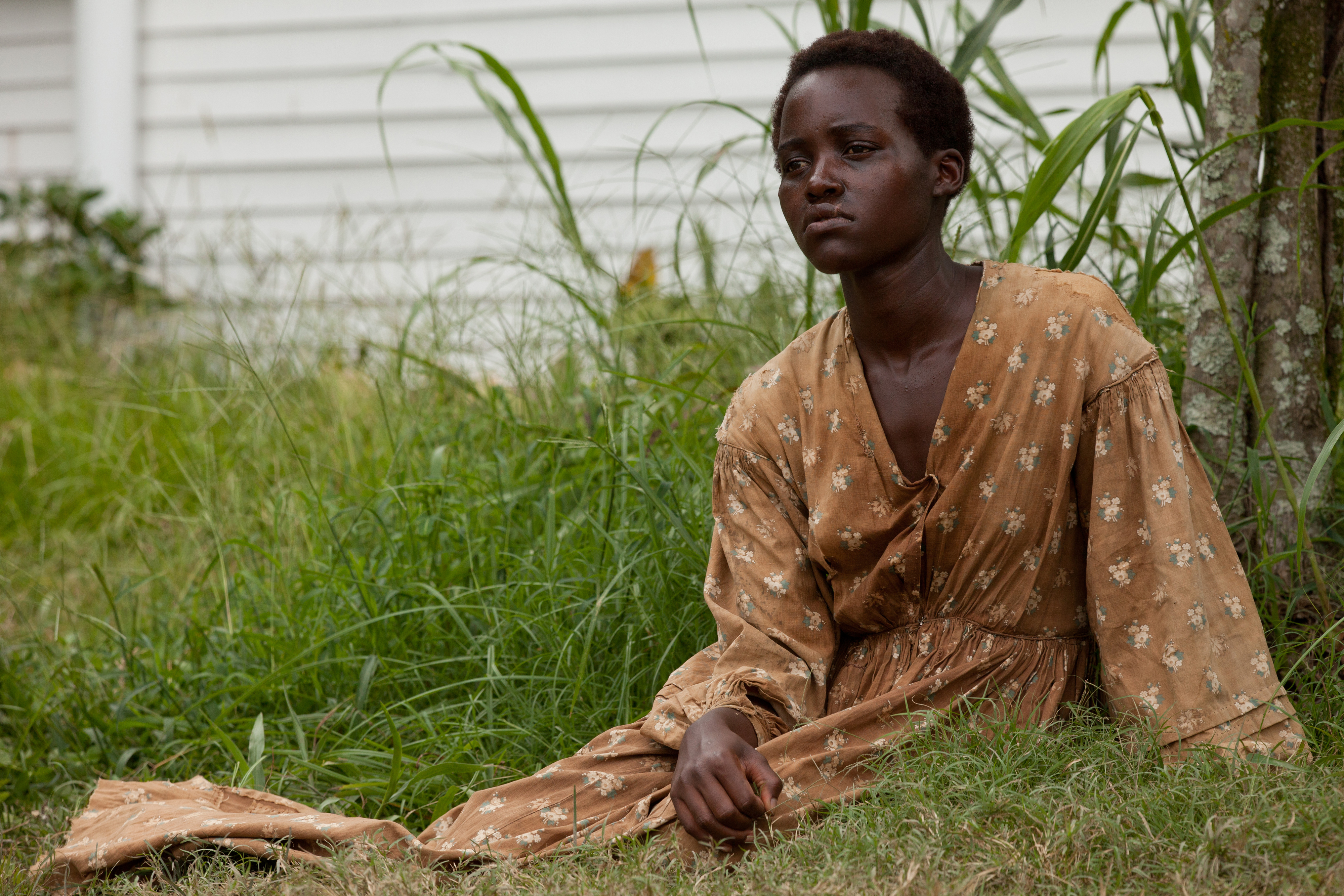