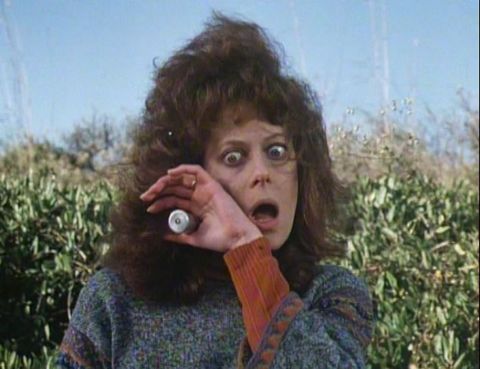 The Slayer: Nightmare on Elm… Island Review by Justin Nordell

The illustrious list of “Video Nasties,” films dubbed too violent for home video release in the UK via Parliament’s Video Recordings Act of 1984 and subsequent legislation, is a veritable who’s who of some of the most beloved gore classics of yore: Blood Feast, Cannibal Holocaust, The Evil Dead, Last House on the Left, etc. These films were mandatorily banned from public consumption, though some squeaked through with various edits. It has taken decades for some of these films to be released uncut on home video for horror fans to enjoy in their entirety for the first time. Thankfully, as some of these films find their way onto UK shelves, US fans are getting the chance to own them as well thanks to bi-continental distributing powerhouse Arrow Video, and The Slayer is one of the rare video nasties, given the distinction for one particular kill in the film, that remained unreleased in both the US and UK… until now.

An obscure sub-genre hybrid, The Slayer opens with a wide-eyed ginger (Sarah Kendall, whose only other screen credit is disappointingly a stewardess in The Karate Kid Part II, as I find her and the insane faces she makes wildly entertaining) seeing a series of dream-like images that culminate in a demonic creature wrapping its blood-soaked hands around her face… but oh, it is just a dream. The ginger is Kay, a renowned painter who suffers from recurring night terrors. Luckily, her partner David (Alan McRae, the father in the 3 Ninjas franchise) is taking her on vacation with her brother Eric (Frederick Flynn, The Forsaken) and his actress wife Brooke (Carol Kottenbrook, Thunder Alley) to a deserted island by biplane to stay at a friend’s remote shore house in the off season… what could go wrong!?

Within the first twenty minutes of the film, we discover that our quartet is not alone, as there is a fisherman on the island as well. But as soon as we meet the poor, doomed fella, he is bloodily bludgeoned to death by an unknown assailant. Is there someone else on the island, or is it one of our foursome? While The Slayer purports itself as a slasher film, it turns out to be anything but, and is a far more fascinating beast. Following the film’s second death (a delightfully prolonged practical effects laden kill), Kay begins to realize that the deaths only occur while she’s asleep.

The film then evolves into an almost reverse take on A Nightmare on Elm Street, wherein a demonic murderer kills people in their dreams, whereas in The Slayer it may or may not be Kay’s dreams themselves that manifest and kill people. Predating the Elm Street series by two years and having scenes with striking similarities to Elm Street 1 & 3, one can’t help but wonder if Wes Craven or his team drew inspiration from this little gem. Regardless, the film puts forth some truly fresh ideas on the genre and culminate in a love it or hate it ending that I simply adored!

Arrow’s release of The Slayer is unquestionably the best the film has ever looked or sounded, with a brand-new restoration from a 4K scan of the original camera negative and original mono audio. Shot on Tybee Island off the coast of Savannah, GA at the turn of the 80’s, first time director of photography Karen Grossman (fellow Arrow Video cult classic Microwave Massacre) crafted some simply stunning shots of the island that showcase brilliantly in HD. Even the practical effects (courtesy of Robert Short, who went on to do effects for such films as E.T., Splash, and Joe Dante’s Piranha) stand up to the HD treatment, with the blood flowing freely across the screen and the pierced flesh still able to make the skin crawl.

The extras, though, is where Arrow’s release of The Slayer truly shines. While commentaries are a dime a dozen in the Blu ray market, Slayer‘s adds so much to the viewing experience as writer/director J.S. Cardone (Wicked Little Things), actress Carol Kottenbrook, and production manager Eric Weston (Evilspeak) recount the excitement and obstacles of working on their first feature. A Nightmare Island: The Making of The Slayer documentary (whose runtime is nearly equivalent to the film’s) gives further insight into what made this film such a joy to work on, including a fascinating in-depth discussion with Robert Short and his practical effects work. Return to Tybee: The Locations of The Slayer showcases the island itself and highlights that the abandoned theater in the film has since been restored and turned into a fully working stage and film theater (where, naturally, this restored version of The Slayer played first). The Q&A from The Slayer’s screening on Tybee Island is also included as an extra, as well as the incredibly unique audio track of the audience reaction from that screening. Yes, you too can watch The Slayer with the shrieks and rumblings of complete strangers! An odd addition, but it just goes to show the amount of TLC that Arrow gives their releases.

It’s hard for me to highly recommend The Slayer, as its low body count and slow burn narrative would sink a modern horror film in today’s market, yet through strong character work and scene composition that belies the greenness of first time director J.S. Cardone, I was completely drawn into The Slayer from start to finish and hope you will be too. That, and I want to rewatch the film immediately to GIF every reaction face that Kay makes.