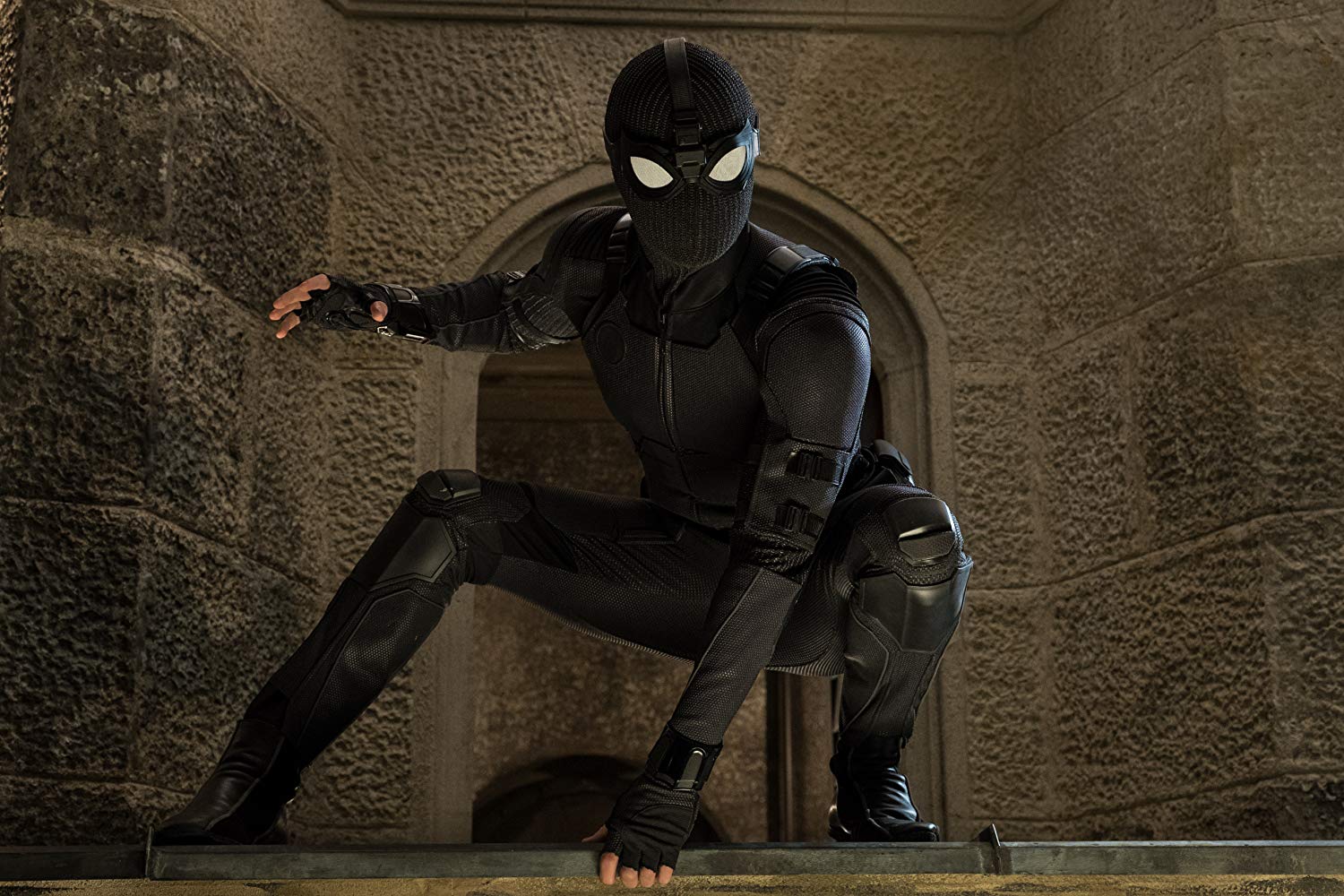 The MCU has become that comedian who can do no wrong. One that never has a joke that falls flat and bombs. Even if jokes are not as wicked as when comic first hit the scene,  he or she will always get applause and love from the crowd. The MCU is like that comedian because it has been around for a while, built a loyal fan base and does not suffer the scrutiny the way that other genre movies do.  SPIDER-MAN: FAR FROM HOME is that comedian and will undoubtedly get the last laugh; because it is FAR from GOOD.  Its infantile humor, senseless plotting, cliché villain and cartoonish set pieces would get thrashed if it were in any other movie.  But the Magic M title card at the start of the movie will protect it from the deep analysis.  It is nowhere near the Academy Award-winning SPIDER-MAN INTO THE SPIDER-VERSE’s narrative quality, creative spunk, and virtue. SPIDER-MAN: FAR FROM HOME has none of the above.

Said to be the final chapter in MCU’s Phase 3,  SPIDER-MAN: FAR FROM HOME takes place shortly after the epic events in AVENGERS: ENDGAME. The dust is still settling post “blip” which personally, I thought “the snap” was a snappier name for it). Now, Peter Parker (Tom Holland) is back home, tired, mourning the loss of his mentor Tony Stark and is packing for a much-needed vacation – a high school European Vacation! His plan is to enjoy being a teenager, take in the sites, woo the heart of MJ (Zendaya) and NOT be Spider-Man.  We know Parker is serious because he even goes as far as ghosting Nick Fury! Well, the Comic Book gods laugh at those superheroes who make plans.  No sooner is Peter and class checked into their Venice Hotel, does a water monster appear along with a new superhero  Mysterio (Jake Gyllenhaal) who with a little help from your neighborhood Spider-Man adventurously thwarts the water creature! Mysterio explains his appearance and gets Fury and Company to aid in defeating an “Elemental” that not only looks to lay Prague to waste but Earth as well!  So much for a fun, relaxing, romantic high school vacation.  To tell more of the plot would be Spoilerfluous.

Not being a huge fan of SPIDER-MAN: HOMECOMING, I did begin to gain an appreciation of Holland’s Spider-Man in the recent Marvel movies.  So much so, I’d hoped FAR FROM HOME would cement my opinion reversal of the character re-boot.  FAR FROM HOME dashed my hopes in believing this incarnation of the web-slinger can stand alone.  One of my biggest issues in HOMECOMING is the movie’s reliance on Tony Stark & Happy. Iron-Man garnering more applause than the title character exposed an apparent narrative problem; not much faith in the title character.  FAR FROM HOME relies on even MORE characters to aid the web-crawler; Nick Fury (Samuel L. Jackson), Agent Hill (Cobie Smulders) and Happy (Jon Favreau).  All, especially Happy, have significant screen time.  Can you just let the kid have his own movie? How many suits does he need to have?  It’s not a Cher concert. 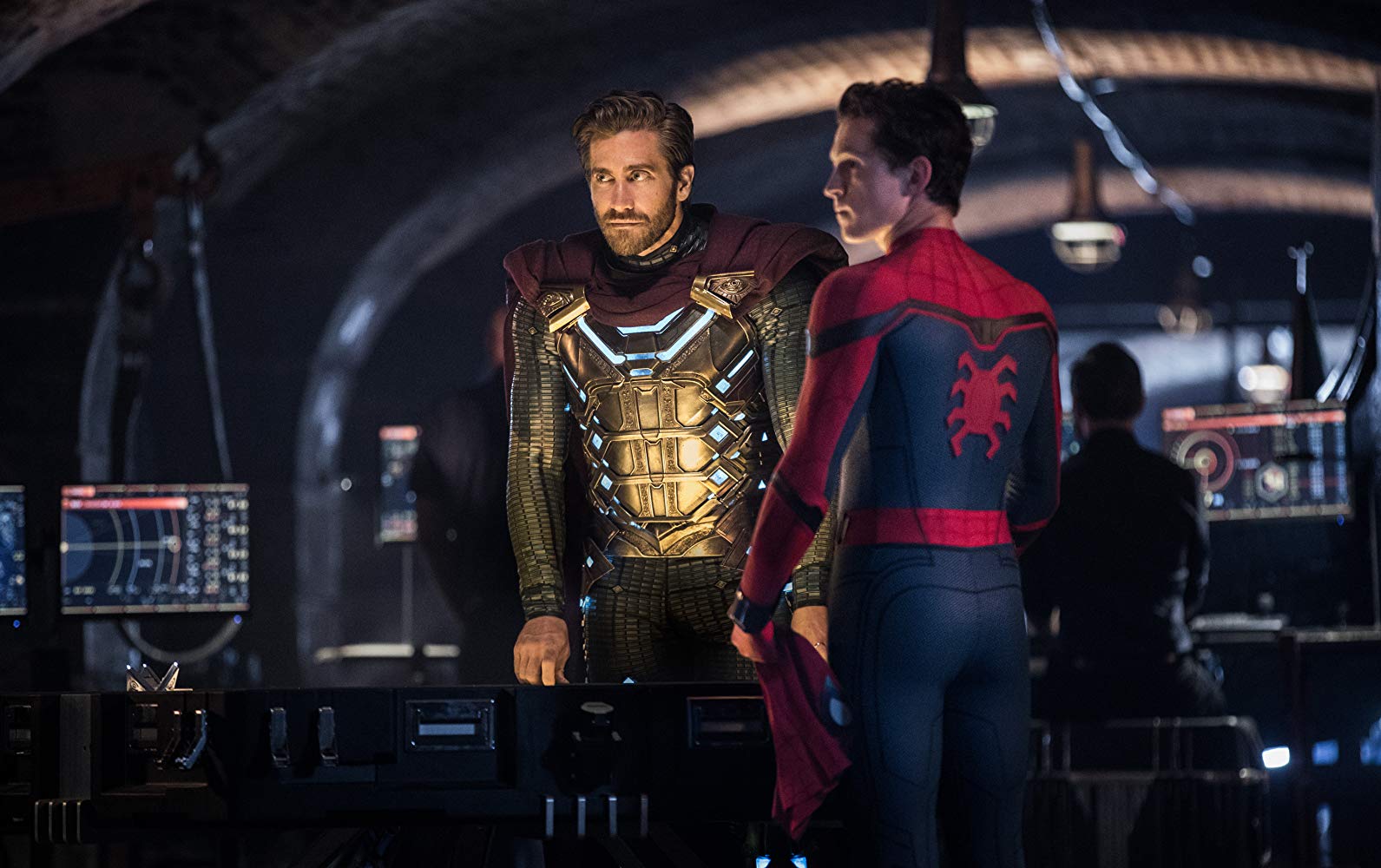 Whatever charm was built in HOMECOMING is wrecked here.  Any references to “John Hughes” are wiped away. The kids have become silly caricatures meant for humor rather than depth.  Regarding silly humor; the teachers/chaperones played by Martin Starr and J.B. Smoove are a bunch of buffoons to the point that it makes me wonder why any parent would leave their kids in their care of these teachers in school, let alone on a trip to Europe.

Director, Jon Watts delivers a frenetic pace and packs a lot onto the silver screen.  At times it looked 3D without having to wear the glasses!  The 3rdAct was without restraint and dizzying. It was just too much.  A less is more approach would’ve grounded Spider-Man more in reality than a cartoon.

Jake Gyllenhaal was a mixed bag.  At times delivering a casual subdued performance where he was best. Then switching to over the top, scene-chewing where he was not as interesting.  Tom Holland is Peter Parker/Spider-Man for the foreseeable future.  That’s not necessarily a bad thing but they should let him stand on his own two legs.  Let him be Spider-Man without a web slung net.  Zendaya is fine.  She’s really not given much here.  The character deserves more TLC.

Audiences movie quality standards don’t appear to apply anymore within the MCU.  Film it and they will unapologetically love it. You’ll undoubtedly see quotes like: “Best in MCU”. “Best Spider-Man ever” etc etc.  Truth is; it’s not.  Not even close. It is FAR from being the BEST of anything. It made me long for the Sam Raimi/Tobey Maguire days.