Spider-Man: Into The Spider-Verse is the best Spider-Man movie since Sam Raimi was making them. It’s more fun than any of the live-action ones because of the liberties it can take with the animation format. This is the kind of fun you can only have in animation because people take live-action too seriously. Yeah, Spider-Man always wisecracks, but if you throw in an emo dance that’s too much for comic book fans. Here, they can use every aspect of the format, the story, the theme and meta levels and I don’t think any Comic Book Guy is going to complain that they broke the physics of the MCU.

It’s no surprise that anything Phil Lord and Chris Miller, or their 22 Jump Street writer Rodney Rothman, are involved with would be irreverent. They have fun with monumental Spider-Man moments like the spider bite, getting the hang (should I have said swing?) of his powers and that perennial Spidey wisdom. Co-directors Rob Persichetti and Peter Ramsey, formerly of Dreamworks films, seem to have found a new home bringing Lord and Rothman’s narrative to life.

There’s a fun mythology to this multi-verse of alternate dimension Spider-Mans, but it’s not so seriously sci-fi that it doesn’t see the absurdities of the premise. In fact, they emphasize some absurdities and make them central characters. Nicolas Cage’s Spider-Man is magnificently Cagey. 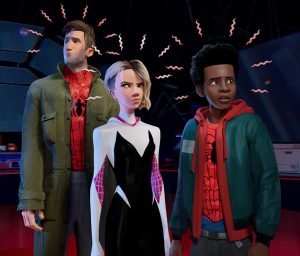 The dialogue is quick so it’s more than just one-liners. Set piece scenes are setting up wordplay as much as they are the visual complexities, so the payoffs are all intertwined. And within that Miles’ hero’s journey is still legitimate. That’s the key. Making fun of the tropes is not negating their importance. In a way, it’s giving them more power because they can withstand a good ribbing and still be genuine.

Into the Spider-Verse has an interesting look that’s embracing the aesthetic of comic book pages come to life. You see the streaks and ink strokes, and every frame is on a textured background like paper. That has an interesting way of blurring out backgrounds and shifting the viewer’s focus. There’s really not a single shot where the entire frame is clear. Comic book tropes like thought boxes and splash pages have special new powers in animation that both celebrates them and mocks them.

When there are epic superhero battles, the action is clear. There are inventive sequences that utilize both supervillain and Spidey powers creatively. There’s a nine character fight scene where you can keep track of every combatant. Live-action movies these days have trouble keeping track of two. Even intimate scenes play with staging, since Spider-Men can stand perpendicular to vertical walls.

With great power still comes great responsibility. These filmmakers have the power to make us laugh, and the power to cut through any Hollywood formula. Spider-Man: Into the Spider-Verse uses those powers responsibly to push the genre to new depths without ever disrespecting the magnitude of the Spider-Verse. Franchise Fred approves.