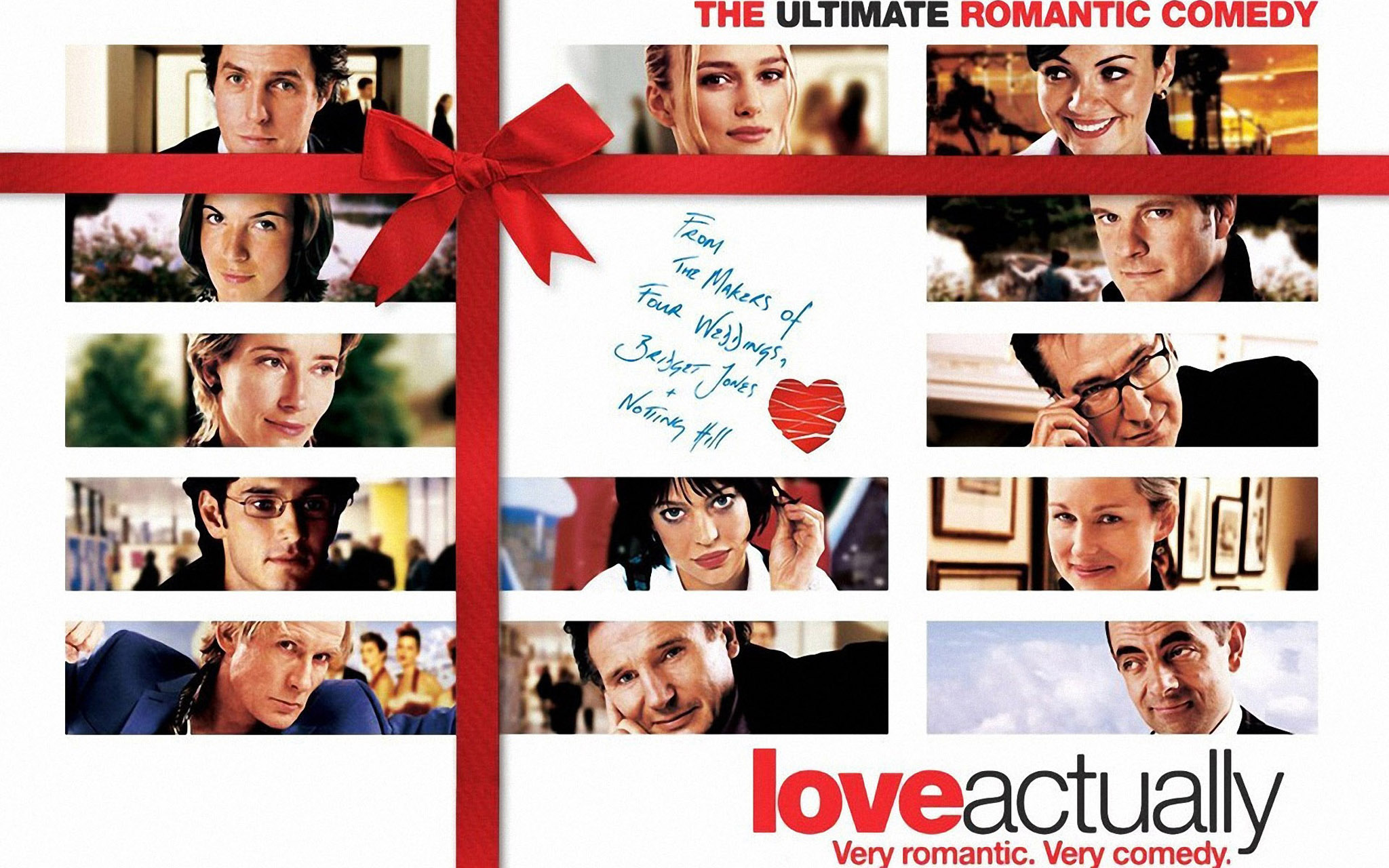 I need help! You see, I’m so terribly love-struck, but I’m also so incredibly British and mousy that I couldn’t possibly tell the man of my dreams how I feel! I work with him- how would that look? Actually, it’d be quite excepted as I know two other women ALSO in love with men they work with! What are we to do!? One of them is attracted to a married man while the other is attracted to her co-worker and I want to shag the PRIME MINISTER! And it’s almost Christmas and we all don’t want to be alone! I’ve tried everything! I’ve tried doing nothing and that didn’t work. I’ve tried giving longing looks in his direction but turning away when he turned towards me and THAT didn’t work. I’ve even tried just literally TELLING him that “I’m yours” and that didn’t work! At least I’m not widowed or in love with my best friend’s spouse or spending all the money in my bank account to fly across the country to find love…now THAT would be insane! Anyway, I must go…I’m off to hop in a cab and get to the airport just in time to tell the man I love that I love him and can’t live without him! I don’t even need to go past airport security BECAUSE I’M IN LOVE AND IT’S CHRISTMAS! YOU CAN’T ARGUE WITH LOGIC LIKE THAT!

Holy Rudolph’s nose, what did I just watch?

This trend of ensemble films may have stemmed from this very film. We have found patient zero! And it hurts my heart that we have England to blame for this trend. You British blokes make my heart soar normally! Extras, The Office, Shaun Of The Dead, Monty Python….I could go on. But then you go and create this saccharine, unrealistic jaunt into the lives of…oh, God knows how many storylines, I seriously lost count. But this trend of mushing together 4-8 storylines and fill it with big-name actors has been around for some time. You, dear reader, got a taste of it with The Holiday. But at least that was just two! We have so many, it’s not even worth it to analyze all of them and you can already guess the hackneyed premises that present themselves in any love story:

– Friend in love with his best friend’s wife

– Co-worker in love with boss

– Co-worker in love with co-worker

….Okay that last one is off the beaten path, which is probably why it was the most tolerable storyline to me. Bill Nighy plays Billy Mack, an older musician trying to score one last big hit single with a Christmas song…which he succeeds in doing in spite of himself and his inappropriate behavior when trying to plug his song (whether on radio shows or television). Bill Nighy is understatedly very funny in this and as my roommate pointed out, his song is actually quite catchy. It’s the only storyline that didn’t take itself too seriously but still showed a bit of heart when Billy expresses his appreciation for his manager towards the end.

My long-standing problem with these types of movies is that they come off as lazy. Instead of creating a cohesive storyline with one plot and a handful of main characters, it’s stretched out so thin that so few of the narratives hold any weight. And how could they?! With about 10 plots that jump back and forth, you aren’t given anywhere near as much time to try to care about these characters or what happens to them. On top of that, some big portions of this film fall into that trap most romantic comedies make which would be to explore a lot of the tropes that you, dear reader, are familiar with: falling in love immediately with a stranger, the characters speaking in such obvious declarative sentences that there’s no room left for subtlety or situations so unrealistic that at one point, I literally thought it was a dream sequence.

As an example…Colin Firth’s character falling in love with a Portuguese woman working in his vacation home (maybe? It wasn’t really explained) after possibly a week. And he loves her so much that he learns part of her language and flies to Portugal to ask for her hand in marriage in front of her whole family.

Or when we were whisked off to Laura Linney’s storyline that she is in love with her co-worker and the only way the audience knows this is because her boss calls her into his office to tell her that the whole office knows she loves the “enigmatic chief designer” and she should just tell him that she wants to bang him and have his babies (quite literally…this is what was said). I mean, clearly this is such a common occurrence for everyone, right? I can certainly relate! My boss just last year met with me to discuss my yearly employee review and added that I wasn’t much of a leader because I didn’t tell the accountant on the 4th floor that I wanted to suck him dry. Granted, it was good advice.

However, my favorite (sense the sarcasm, I know you can do it) slice of this rom-com cheese pie was Colin, the overzealous horndog who thinks British girls are stuck up so he wants to fly to America because American girls are “up for a laugh” and they won’t be as frigid. And where does he choose to go? Wisconsin! A regular hotbed of laughs. Although, his storyline did end up rather sad when he was wrongfully put in prison for the murder of a girl he met while there. He should’ve just stayed in England.

It’s so hard being the Prime Minister. I mean, I have so much downtime and hardly any meetings that I’m left with my own thoughts and all my thoughts go back to that beautiful dark-haired woman who works for me. I don’t even know what she does, I’m so in love with her! She could be my personal assistant, she could be in charge of the country’s economic decisions, she could be in charge of just finding lunch for me- I don’t know! But I do know that my whole staff keeps trying to convince me she’s fat. Seriously- they even had a brief discussion about it at the United Nations. It seems to be a concern of national security as to how big her thighs are. Either way, it keeps being mentioned so I thought I’d mention it to you, Diary. But to me, she’s beautiful! You know what? I’m just going to skip out on my meetings with world leaders to go find her! I’m not even sure of her address even though we’re the government and could easily find it….because love is sometimes hard! And sometimes you need to walk up and down all the apartment buildings in downtown England to find the girl that you want to spend the rest of your life with (after having 3 very short conversations with her)! I’m off! And forget any security detail- I’M IN LOVE AND IT’S CHRISTMAS SO IT DOESN’T MATTER!

One of the 40 or 50 plots in this film has Hugh Grant as the new Prime Minister and one of the women who works for him keeps batting her eyelashes at him, so we know it’s true love. However, I really would like some explanation as to why this other woman, who also works for the PRIME FUCKING MINISTER, would actually discuss with him how fat she thinks this girl is. Keep in mind- a government FUCKING agency and two members of that agency are having a discussion ABOUT A FELLOW MEMBER’S FAT THIGHS! What world am I living in? When going through this at the table read for this movie, did they just assume that this would come off as a storyline people can believe or did they let an intern finish it? Let’s go with the latter and call it a day BECAUSE MOMMY NEEDS HER SPIKED EGGNOG TO GET THROUGH THIS FILM!

I would love to not spoil much for you, but it’s a rom-com, so, take a guess- EVERYONE ENDS UP FINE! The ones in love either find a way to cope with heartbreak or they stay with their loved ones and everyone’s better at the end. Let’s all go home. Start the car, I’ll say goodbye to the host.

FINAL WORDS: During my view of the film, a friend of mine who likes this film pointed something out to me: that it’s supposed to be mindless and silly and to maybe not take it so seriously. So, I shall give her advice to you. If you want unrealistic, mindless, and silly (and want to somehow try to figure out why Colin brought a SOUTHERN girl back from WIS-FUCKING-CONSIN), then go for it this holiday season.