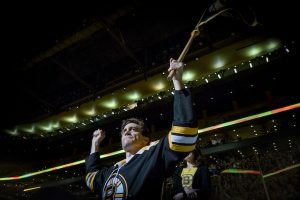 Cinema can be not only a great monument to those who have triumphed over adversity like Jeff Bauman in Stronger, but a reminder to those who have been fortunate enough not to face dire tragedy that anything can be surmountable. If Jean-Dominique Bauby can write a book with one eye to blink the entire alphabet in The Diving Bell and the Butterfly, then I have no excuse for writer’s block. If Louis Zamperini can survive a shipwreck and a Japanese prison camp in Unbroken, then I can get through the hardest times I’ve been privileged to face. I should really see My Left Foot at some point too. 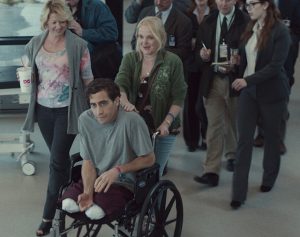 Jeff Bauman (Jake Gyllenhaal) lost both legs above the knee in the Boston Marathon bombing. He saw one of the bombers and was able to identify him to authorities before facing his own recovery process. His ex-girlfriend Erin (Tatiana Maslany) came back to help and his mother Patty (Miranda Richardson) was fairly hands on too.

Stronger is less about Jeff’s physical recovery. It’s more about how he had to adjust to becoming a spokesperson for Boston. Imagine if everyone who’d lost someone, not just in the bombing but in similar violent attacks, wanted to share with you. That’s a lot of responsibility for an average guy who’d never prepared for it. You want to be sympathetic but it’s a lot on his shoulders. 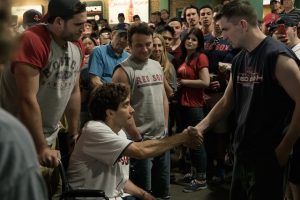 Even if everyone who was inspired by you stopped you every day to tell you, you’d feel the weight of the responsibility of being that role model. It’s positive too, of course, but Stronger is about Jeff’s adjustment to that role. A lot of the focus is on Jeff’s downward spiral. Jeff went to a dark place and the movie sympathizes with him. 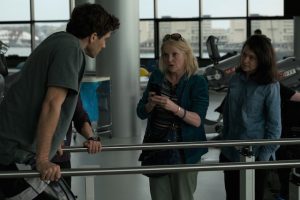 So there aren’t any rehab montages unfortunately, but those movies already exist. Any of Jeff’s physical adjustments are portrayed in real time. Lowering himself into a bathtub is a whole process, and balancing himself on a toilet seat is not pretty. Leaning to reach for the toilet paper is certainly something those of us with legs take for granted. We also see some of the graphic aftermath of the bombing.

The visual effects are seamless. This sort of effect was established in 1994’s Forrest Gump, which Jeff even self-deprecatingly mocks. The technology is there but it’s really seamless because Gyllenhaal’s performance is so realistic as someone adjusting to walking with prosthetics or propping himself up with his hands. 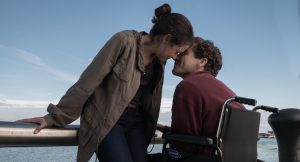 As famous Boston mothers go, Patti is far less aggressive and abusive as the late Alice Ward from The Fighter. She is emotionally manipulative in her own way, but I understand the tensions of a loved one thrust into a spotlight that might seem more glamorous to her than it is to Jeff, who wants to put all of this behind him. It seems Jeff’s relationship with Erin coincides with the three acts of a screenplay, but please tell me if those events actually lined up in real life and I’ll believe them.

In the canon of triumph over adversity movies, Stronger represents an important perspective. It’s not only the physical adversity he must overcome, but those around him should be sensitive to the emotional pressures of being propped up as a hero. Not that Stronger is the only movie in this genre that’s gone there, but it’s a worthwhile focus for a biography of a still living person from a recent tragedy.