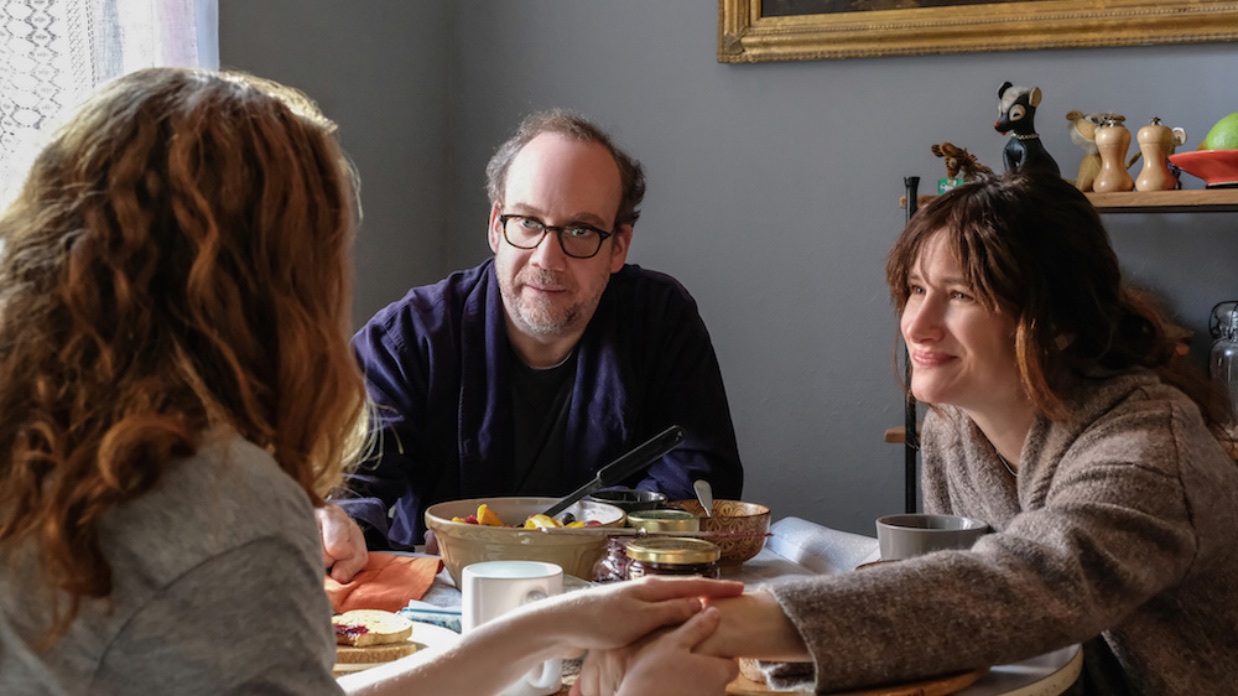 Sundance 2018 Review: Private Life is Tamara Jenkins at her best!

Private Life was one of the sixteen films that I was most excited about seeing at the 2018 Sundance Film Festival. As I mentioned in my most anticipated films of the fest article, I didn’t know anything about Private Life except that Kathryn Hahn and Paul Giamatti were playing a married couple. This is the only film at Sundance that I didn’t read the plot description before going into the theater, so it was a total surprise and an incredibly rewarding one at that.

Richard (Giamatti) and Rachel (Hahn) are a married couple that waited until their 40s to have children and as a result, are having problems conceiving. They try everything including IVF but they still can’t get pregnant. With nowhere else to turn to, Richard and Rachel start looking for an organ donor until they receive an unexpected phone call that could give them the solution that they are looking for.

Written and directed by Tamara Jenkins, Private Life is a fantastic little film about the struggles of life, marriage, and infertility. The film is a dramedy with the perfect blend of comedy and drama. The way that Jenkins manages to balance the heavy emotional moments with lighthearted laughs is what makes this film such an incredible experience.

Viewers should be warned however that Private Life is not an easy watch by any means. While there is a lot of comedy, the film is very emotionally draining and what Rachel and Richard are going through is undoubtedly heartbreaking. As a viewer, I felt like I was a fly on the wall in this couples home. Every argument is full of anger and heartache but it is completely justified. Tamara’s screenplay doesn’t hold back and there are several moments where I couldn’t help but feel a tad overwhelmed emotionally by what was happening to this couple.

The pairing of Paul Giamatti and Kathryn Hahn is perfection. These two actors may seem like an odd pairing choice on paper but once you see them pour their hearts and souls into this material, you will be blown away. In a lot of ways, it felt like Giamatti and Hahn must have gone through a similar experience in their actual lives because their performances felt so authentic and true to life.

There are multiple scenes where Rachel and Richard start criticizing one another out of anger and frustration. All of these moments are powerful because they are struggling to put into words how they are feeling. Giamatti and Hahn are so committed to the story that as a viewer, you feel what they are feeling. The argument that occurs between Rachel and Richard while lying bed at the end of the film should earn Giamatti and Hahn a best actor and best actress nomination come next year’s award season. These two actors are that amazing and bare their souls in this film.

While the plot of Private Life is primarily focused on Giamatti and Hahn’s characters, there are three important supporting characters that need to be mentioned. John Carroll Lynch plays Richard’s brother, Charlie, Molly Shannon plays his wife, Cynthia, and Kayli Carter plays their daughter, Sadie. Lynch plays Charlie as the laid back and understanding brother but Cynthia is more of a worrier and against Rachel and Richard’s fight to have children. These two talented actors don’t have huge roles but they do have some great moments especially during the second half of the film. The one scene that really sticks out involves Cynthia flipping out on Rachel and Richard during Thanksgiving dinner. The scene is equally hilarious and heartbreaking and showcases how much range Shannon has an actress.

The standout performance among the supporting cast is without question, Kayli Carter. The talented young actress, who also appears in the Netflix series Godless, delivers a performance that is equally as funny as it is heartfelt. I love the conversations that Sadie has with Richard about her love for writing but how she hates her fellow classmates when they act like they are struggling despite the reality that they all come from wealthy backgrounds. Sadie has a big role in the film and there is a lot riding on her performance. Luckily, just like Giamatti and Hahn, Carter commits to the story with a very well-rounded performance that combines humor and heart.

Private Life is Tamara Jenkins first film in 10 years and in my humble opinion, her best film to date. It is a powerful little film about hope and never giving up. The realness of Jenkins script combined with two tour-de-force performances from Paul Giamatti and Kathryn Hahn makes Private Life one of the most emotionally powerful films to come out of the 2018 Sundance Film Festival. I highly recommend watching this film but be sure to bring the tissues as you will need them.