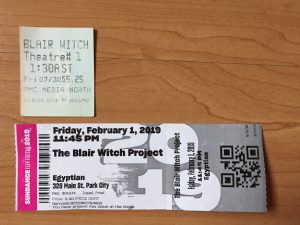 On opening night in 1999, theaters had to add late shows because The Blair Witch Project kept selling out.

I did not like The Blair Witch Project when it came out in the summer of 1999. I even called it The Blair Shit Project because I was clever. Like, nice job selling a pile of rocks and a bundle of sticks to audiences but it still wasn’t a movie.

Then a funny thing happened. The sequel, Book of Shadows: Blair Witch 2 came out and I loved it. It was the first time I’d loved a sequel to a movie I hated so I declared it the best sequel ever. It had me as soon as it called bullshit on the first movie’s pile of rocks and bundle of sticks. Fans did not appreciate being called idiots so it took 16 years to make a third Blair Witch which I liked too. 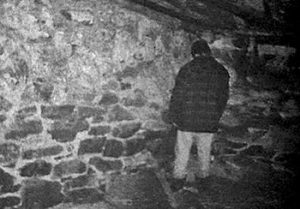 So I’d always meant to give the original a second chance. Where better to do that than at the place where it all started. Sundance showed a 20th anniversary screening from the collection, and guess what? I like The Blair Witch Project now. 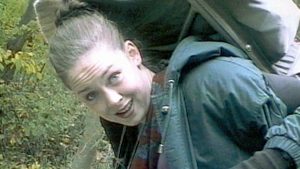 What I see now is this is a really good drama about three characters and the actors are really natural as college kids. They get drunk and goof off at first but they’re not overdoing it. Then they really lose it. Heather Donahue does most of her performance as a voice behind the camera, and through her breathing. When I was their age, I took them for granted, but now I appreciate what they brought to the roles. Mike Williams is really sympathetic as he realizes he put his life in unreliable hands. Josh Leonard tries to be the peacekeeper. 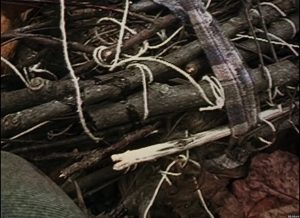 Now I like the bundles of sticks and piles of rocks because those are the franchise trademarks. When you see them you know you’re in a Blair Witch movie. A bloody tooth is genuinely creepy. I forgot about that. If the woods of Burkittsvile, MD are really small, they did a great job making them look vast and easy to get lost in. Plus the Blair Witch was messing with them so they could’ve gotten lost in a Pumpkin patch. 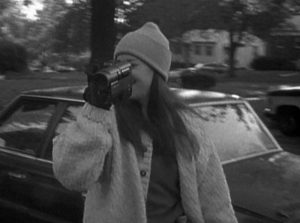 I have a theory that douchebags are the heroes of found footage movies because only a douchebag would keep filming in a crisis. Heather is the original douchebag. She even says it’s all she has left, and Josh and Matt get super mad at her, rightfully.

Now that I like The Blair Witch Project, that throws off my ratio for Blair Witch 2. It’s no longer such a drastic improvement over the original so I’ll have to find a new Best Sequel Ever,or change my criteria for it. Franchise Fred can change in 20 years. 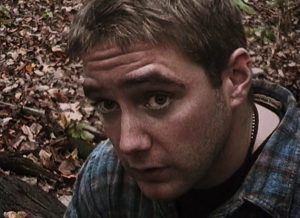 Even when I didn’t like the movie I started to feel bad for the people that made it. None of them really reaped the rewards for making an enormous hit movie. They sold for a million at Sundance and made the studio Artisan over $100 million, yet directors Daniel Myrick and Eduardo Sanchez still have to scrape together their indie films. They didn’t even get one cushy studio job. 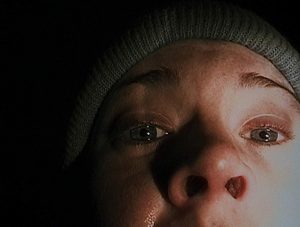 Heather Donahue starred in the most profitable movie of all time. Her confessional scene with the camera filming up her nose is one of the most iconic in all of cinema. She got a few more acting roles and ultimately left the industry. She should’ve been a star, and then still left the industry if they wanted.

Maybe that endeared me back to the movie. Even after all the hype, all the money, they still ended up underdogs. Divorced from the hype where people thought it was real (and I knew it wasn’t because they were still alive), I can appreciate it as a movie. 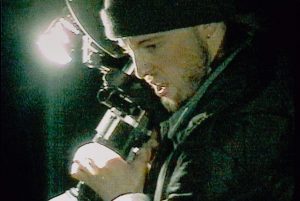 Some other small details I appreciated: Heather doing her makeup in the car mirror is a nice touch. She thinks this documentary will be her calling card so she wants to present herself glamorously. Whenever they’re using the film camera you can hear the clacking because it’s not masked and they couldn’t ADR it because it’s a documentary and they’re “dead.” The grain of the film portions were beautiful even in a DCP, and I’d forgotten what video looks like in a theater before we had digital. One question though: how did Heather’s video camera battery last three plus days? 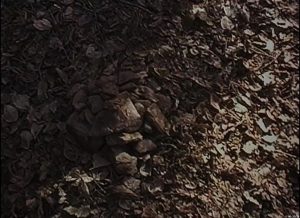 I was still finishing my senior year of college when The Blair Witch Project premiered at Sundance so I couldn’t be there (although maybe I should’ve as a film school trip). It was great to experience it as a 20th Anniversary screening. I’m sorry I was so hard on it back then. Now I like the characters so much I don’t care if it’s shaky video in the woods.