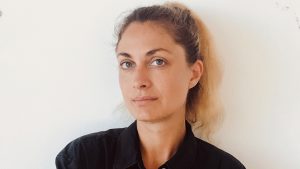 In The Mustang, inmates learn to train captured wild mustangs so that they can be auctioned off. If that sounds like a good way to teach violent convicts patience and kindness, and save wild animals from execution, that’s because it’s a real program being put to use in many prisons with wild mustangs.

Mathias Schoenarts plays Roman Coleman, an inmate who just wants to serve his time alone and push even his daughter (Gideon Adlon) away. Nevertheless, he finds himself in the mustang training program and learns to find different approaches to conflict than raw aggression.

The Mustang director Laure de Clermont-Tonnerre spoke with WLE at Sundance about her film, which she also co-wrote. Focus Features will release The Mustang on March 15. She also directed the pilot to Hulu’s upcoming series The Act out March 20.

WLE Were you able to choreograph herds of mustangs running for the opening shot of the movie?

LDC: No, I followed a real roundup, horse roundup that actually was set up like two hours from here. When I came here, I knew it was the only way to shot it was actually to come and to set up my camera and shoot whatever I could. That’s why it’s really a lot of wide shots.

WLE Are there any other shots in the movie that are real horses and not trained?

LDC: All the beginning mostly. It’s a combination of real documentary style shot footage. And some staged ones. It’s really a combination until the scene with Mathias. The first five minutes is a mix between those.

WLE How many horses played each character in the movie?

LDC: Three. Three hero horses. We found one who was in Florida. He’s a very well trained horse. He’s the only ridable one, the one Mathias rides. We used him for all the scenes where he’s tamed, or more approachable. There’s another one, a three-year-old stallion from Oklahoma who looks perfectly like the other one but was much greener in terms of he was semi wild still, not really tamed, not really rideable. He was very sweet. He was a little bit fearful and spooky. Then there’s another one who is completely wild, unridable, fearful and he was the one for all the early, early parts. My producer and I kept the trained one. His name is Luke. He lives now in Los Angeles, in Burbank with us. The other horses live with the horse trainer.

WLE So the first time Roman calms down and the horse comes over, that must’ve been Luke?

WLE How many takes on average would you need for each moment?

LDC: We had two cameras. That was very helpful because we had to adapt to unpredictability. Even though we had an amazing horse trainer that was very in sync with the horse, it’s still a horse. You never know how it’s going to react so we wanted to shoot as much as possible. Obviously digital was very helpful for that because it helped us grab the best moments. I would have rolled and not stopped for a while to get what I needed.

WLE Are there any scenes in the movie between the horse and Mathias that were accidents?

LDC: Yeah. Absolutely. There’s one that we improvised completely when he starts to yell at the horse before the horse comes. That was completely improvised. That was not written. I knew it happened because I observed a lot of inmates with their horses losing patience and losing the horse because of anger and frustration. I thought it was a very interesting dynamic that really orchestrates the immense violence and immense desperate, hopeless anger in front of this animal. I was like, “Mathias, maybe you should just try to yell at him. Okay, then it’s actually out and you have these emotions, so you’re really prepared to arc this scene, this beautiful moment.” So we had this trust together with Mathias to sometimes improvise or find new angles throughout the scenes. With the horse, there’s definitely moments with the horses that were choreographed and some others which were loose. Some of it was not written and are in the film. That’s the beauty of being very open to improvisation and unpredictability.

WLE That’s the biggest lesson in the movie. The words can say I’m trying to help you but the horse only understands the anger and aggression. That’s true between people and people too.

LDC: Absolutely, and you have to earn it. You have to earn the trust and respect of the horse. The horse is the one to decide when he comes to you. He’s the one who teaches you when you’re ready to be forgiven, to accept. It’s like resilience. That’s really true. I really witnessed those different steps and we had former inmates from that program on set that actually were also consultants saying, “That happened to me.” We also were encouraged and carried by authentic elements of the stories around us. That was very helpful.

WLE What kind of movie would you like to do next?

LDC: After exploring the physical imprisonment, I’d like to explore a more psychological imprisonment with a story of a mother and daughter. It’s an adaptation of a play, Independence. It’s this mother who has three daughters and she doesn’t allow them to leave the house. It’s another drama, funny exploring insanity through four female characters.

WLE Have you started the adaptation?

LDC: Not yet. I’m collaborating again with my cowriter Mona Fastvold who just started and after Sundance, I will work with her.

In The Mustang, inmates learn to train captured wild mustangs so that they can be auctioned off. If that sounds like a good way to teach violent convicts patience and kindness, and save wild animals from execution, that’s because it’s a rea...
0
Average User Rating
0 votes
Please sign in to rate.
Cast:Bruce Dern, Gideon Adlon, Mathias Schoenarts
Director(s):Laure de Clermont-Tonnerre
Writer(s):Brock Norman Brock, Laure de Clermont-Tonnerre, Mona Fastvold
Genre:Drama