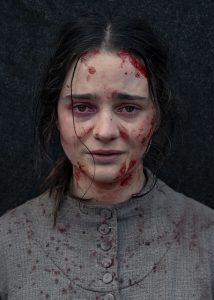 My conundrum with revenge movies is that I’m essentially asking my heroes to suffer a tragedy worthy of revenge. The Nightingale shows a woman doing everything in her power to appease her oppressors, and she still can’t prevent the tragedy. It’s poignant and at that point there’s literally nothing left to do but kill all those motherfuckers.

Clare (Aisling Franciosi) is an ex con working for British lieutenant Hawkins (Sam Claflin) who basically keeps her prisoner, dangling the carrot of a letter of recommendation he never writes. He rapes her but Clare still refuses to leave the post because she believes it’s more dangerous on the run.

Clare knows he’s going to keep raping her. She feels she can suffer those attacks to keep otherwise safe. How many women have been conditioned to suffer for the greater good and not even complain? Maybe not in situations where they’re repeatedly raped, but sometimes even in modern day workplace harassment situations.

Even enduring rape isn’t enough to appease the lieutenant and he keeps taking more. I can’t recall an avengable trauma worse than this one and I’ve seen I Spit On Your Grave, The Crow, Death Wish, Braveheart and more. What’s even worse than rape? You’ll be convinced.

This is a first act relevant to today. There’s a school of thought that If you just keep quiet and don’t protest abuse, you can make it in business and in life. It’s not true though. Abusers are never satisfied so they keep escalating. You give an inch, they take a mile and they’re never going to write that letter of recommendation no matter how long you wait.

Speaking up is dangerous too but there’s no safe way to deal with abuse. It makes the inciting tragedy feel inevitable. It was doomed from the beginning of the systemic patriarchal hierarchy. Why does it have to get that desperate before things change? It’s 200 years since The Nightingale is set and we’re still fighting sexual abuse and oppression. We still don’t prevent tragedies that can be anticipated and avoided.

Hawkins’ toxic masculinity has deep roots. He’s been waiting three years for a promotion he’s not getting, because he’s run an irresponsible post with disorderly troops. True to firm, he takes no responsibility for his own lousy leadership. He feels entitled to be Captain so he leaves with his men to his desired post to try to convince them.

Clare follows them and meets more men who either attempt more rape or demand papers and explanations for her travel. So she has to justify herself just for existing because that was the law. Women fought for independence in the ensuing two centuries, so today we just come up with new ways to oppress them.

Hawkins finds more women to rape in his travels too. Black tribes intervene but no one really wins. The British are treating the natives of Van Diemen’s Land just as badly as the women, including Clare’s guide Billy (Baykali Ganambarr). Hawkins’ toxic masculinity eventually screws himself but only after he’s destroyed everything else along the way.

The violence is brutal because old times guns are messy. If Clare shoots someone and it’s not a death blow, she has to reload as he hobbles to defend himself. And the second bullet may still not do the job so she has to finish him off.

The revenge isn’t even the most satisfying part of The Nightingale, though it sure does the job. What’s most satisfying is the dramatization of abusers and toxic masculinity. We’re talking about it more now but people still have trouble with abstract concepts. In The Nightingale you can see how this operates.

Clare even has a line to Hawkins, “What will you do when all the women are raped?” That’s the point. It’s never enough to fill the hole in Hawkins’ soul. So trying to appease abusers is a non starter. It’s the nature of abuse to keep abusing. Maybe we can try to rehabilitate some but if they refuse they will reap what they’ve sown. I wish people could just stop sowing evil altogether but it’s been several millennia and here we are.