While I usually enjoy most of the comedies that come out of Sundance, I was nervous about Brittany Runs A Marathon because the plot description sounded rather generic and after seeing Rough Night, Office Christmas Party, and Fist Fight, I wasn’t exactly the biggest fan of Jillian Bell’s comedic work. However, I can admit when I am wrong, and I was completely wrong about this one because not only is Brittany Runs A Marathon an inspiring and fantastic film, but it is also my favorite film to come out of Sundance this year.

Inspired by a true story, Brittany Forgler (Jillian Bell) is a 27-year old New Yorker that has no idea what she is doing with her life. Constantly feeling let down by her friends and seen as a laughing stock by most, Brittany gets even more bad news when visiting a local doctor that she found through Yelp. The doctor informs Brittany that she isn’t living a healthy lifestyle and should seriously reconsider the choices she makes on a regular basis. Determined to make a change for the better, Brittany hopes to lose weight and finds her inspiration by running the streets of New York City.

Initially feeling somewhat discouraged, Brittany befriends Catherine (Michaela Watkins) and Seth (Micah Stock). Catherine resides in Brittany’s building and is someone that she loathes at first, but ends up warming up to after learning more about her. Seth, on the other hand, is someone that Brittany bonds with immediately. After a few weeks of running around the city alone,  Brittany decides to join the running club that Catherine and Seth belong to. After seeing some results, not only on the scale but in the mirror, Brittany decides to set a new goal; to run in the New York City Marathon.

There are a lot of films that focus on a 20-somethings with no direction in life who are struggling to find their way. Brittany Runs A Marathon is quite possibly the best quarter-life crisis film in recent memory. As an audience member, we get to see how unhealthy Brittany’s life is and it isn’t just her eating habits. Brittany doesn’t take care of herself at all. She parties too hard, she drinks way too much and works at a dead-end job that doesn’t even cover her bills. As Brittany tries to turn her life around, she often struggles with habits of her old life but finds inspiration to move past it thanks to the support of her new friends Catherine and Seth.

As Brittany, Jillian Bell is comedic, honest, and raw. Bell portrays Brittany as a real person with genuine emotions and real-world problems. Brittany is a multi-dimensional character that has a lot going on and plenty of obstacles that she is trying to overcome. This is the first time that I have seen Bell showcase her range as an actress. She has to be funny, she has to be dramatic, but most importantly, she has to be relatable and real. Bell carries the weight of this entire film on her shoulders because without her being so damn good and convincing, the entire thing would have fallen apart. As someone who wasn’t a Jillian Bell fan before seeing this film, I can honestly say that this performance is a star-making one as Bell is nothing short of spectacular in the lead role.

While Brittany is the focal point of this story, there are several supporting characters, and each one of them bring something to the film. Michaela Watkins, who is seriously one of the most underappreciated actresses working today, brings her A-game as Catherine. At first, the audience is lead to believe that Catherine is this privileged white woman who makes so much money that she doesn’t have to do anything but work out all day. As it turns out, Catherine uses exercise as an escape from reality because her life isn’t as carefree as Brittany believes. Throughout the film, we get to learn more about Catherine and Watkins helps to ensure that she is a well-rounded character.

Other people in Brittany’s life include Seth (Micah Stock), Grethen (Alice Lee), Jern (Utkarsh Ambudkar) and Demetrius (Lil Rel Howery). While Seth is probably the least developed of all of the supporting characters, he does serve a purpose as he is the first to support Brittany and her goals. In a lot of ways, it is Seth who shows Brittany what real friendship looks like. This brings me to Gretchen played by Alice Lee. Gretchen, just like the other characters in the film, is very realistic as she is this self-obsessed social media influencer. Lee’s portrayal of Gretchen is one that is built on image and status. She is not a good friend to Brittany, and the fight scene which takes place about midway through the film is very hard to watch because it is so raw. The things that Gretchen says to Brittany during this argument are beyond hurtful and as a result, change their relationship forever.

Lil Rel Howery as Demetrius is yet another voice of reason for Brittany. Demetrius is Brittany’s brother in law and just like his supporting role in Get Out ends up being a comedic highlight and pivotal to how the story plays out. There is a scene where Brittany is staying with Demetrius, and during his birthday party, she proceeds to belittle one of Demetrius’ friends’ wives because she is a lot heavier than her husband. This scene is very upsetting to watch because Brittany is projecting her feelings and fears onto this other woman. Brittany says some hurtful things, but Demetrius doesn’t let her get away with it. He sits down with Brittany and talks to her about her behavior and how it is unacceptable. It is also during their conversation where we learn more about Brittany’s shortcomings as well as the fact that she is unable to ask for help even when she needs it.

There is a point in the film where Brittany gets a job as an in-home dog sitter. It is at this job where she meets Jern, and the two of them hit them off rather quickly. I wasn’t entirely sure if I was going to like Jern as a character at first, but Utkarsh Ambudkar makes the character impossible not to love. He is initially introduced as the typical 20-something slacker who doesn’t do much other than hang around all day and hook up with women. However, as Jern hangs around Brittany more and more, we see him change as he realizes that, just like Brittany, he needs to get his shit together.

Paul Downs Colaizzo has created a very special film because not only is it an extremely entertaining but the way that he tells this story is done in such a way that anyone who watches this film can relate to this story on some level. The struggles that the characters face within this film are so universal whether it’s being overweight, struggling to believe in yourself, or simply setting a goal and making it happen. These are only some of the themes brought up in the film, so I truly believe that anyone can watch this film and feel as though it relates to them in some way, which is a pretty remarkable accomplishment for a first-time filmmaker.

Scott ‘Movie Man’ Menzel’s rating for Brittany Runs a Marathon is a 9.5 out of 10. 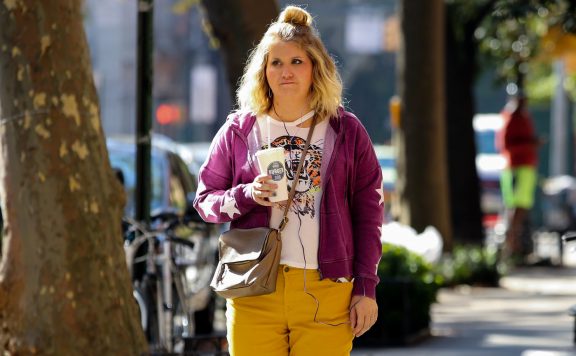 Jillian Bell on Brittany Runs A Marathon, the importance of female led stories and embracing your own self-image.
August 21, 2019 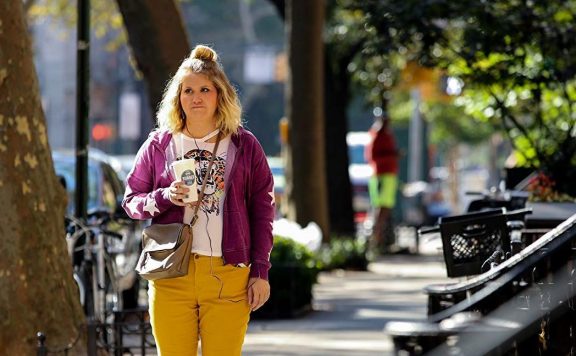 Paul Downs Colaizzo on Brittany Runs A Marathon and how Tobey Maguire made the film a reality
August 20, 2019