Here’s the first movie this Sundance I chose at random because it fit my schedule, and it was great. That’s Sundance Magic, baby. Woodpeckers (Carpinteros) is a real discovery. 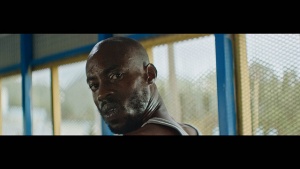 Julian (Jean Jean) enters a Dominican prison. As he learns the rules and hierarchy of the prison, Manaury (Ramon Emilio Candelario) enlists him to help communicate with his girlfriend Yanelly (Judith Rodriguez Perez). There is a women’s prison adjacent and the men and women communicate with sign language. They call it pecking.

Seeing the world of a Dominican prison is fascinating enough. Conditions are considerably worse than US prisons, at least what we see in American prison movies. But the notion that male and female inmates can have relationships is utterly fascinating. It just goes to show that no matter what constraints you put on them, people will find a way. 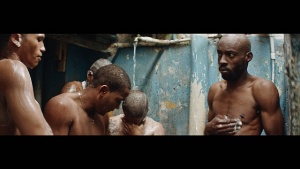 Julien ends up falling for Yanelly. She’s up for it but it’s much to the chagrin of Manaury, understandably. The love story is really compelling as they take advantage of every possible way to steal a bit of time together. I was invested in their relationship and wanted Julien and Yanelly to be together however they could in prison, far more than most rom-coms where they make up reasons to not be together.

I was equally invested in the violence of the prison. Confined confrontations are tense because there’s nowhere to run. Writer/director Jose Maria Cabral keeps the yard and the cell blocks populated with real behavior so you feel like it’s real and there are plenty of characters having their own story. Most impressive is a tracking shot as Julien walks through the prison, with all the background action in every area continues. It’s also wider than 2.35:1 so the added letter boxing feels even more confined. 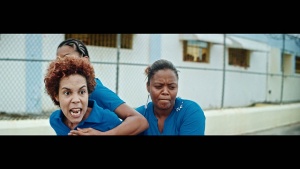 The actors are breakthroughs. Jean keeps his cool in the most intense situations. Perez is a spitfire bringing life to the prison, with a volatile edge herself. Candelario is the heavy but you can see how he’s threatened by losing his one bit of happiness in prison, and would go to lengths of even self-harm to spite Julian.

Prison romance isn’t a genre I ever thought of before but it totally works.

Here's the first movie this Sundance I chose at random because it fit my schedule, and it was great. That's Sundance Magic, baby. Woodpeckers (Carpinteros) is a real discovery. [caption id="attachment_35591" align="alignright" width="3...
0
Average User Rating
0 votes
Please sign in to rate.