The concept of body-swapping in movies became popular in 1976 thanks to the release of Freaky Friday. This subgenre has typically been tied to comedies geared towards families over the past five decades. Swap Me, Baby, directed by Caden Butera, is a body-swap comedy that is not family-friendly at all. This film is 100% geared towards adults. It is the kind of comedy that won’t work for everyone but is likely to delight those who enjoy their romantic comedies with a side of raunch.

The premise of Swap Me, Baby is simple. Kimberly Leemans plays Lily, an uptight businesswoman who hires a male prostitute named Philippe (Falk Hentschel) for a night of sexy fun. Unfortunately for Lily, the condom breaks, and she ends up pregnant. Felix and Lily try to make their relationship work, but they are about to kill one another because they are two completely different people. Their therapist Juniper, played by Ava Bogle, suggests they take a trip to a remote cabin in the woods to escape everyday stress and bond with one another. Even though Lily hates nature, she agrees to the trip and heads to the middle of nowhere with Felix. Once the couple arrives, Felix discovers a magical box, which ends up swapping their souls upon opening.

Swap Me, Baby is a fun and raunchy comedy that you have to just have to go along with to fully appreciate it. Writer Jesse Luman must have watched many body swap movies because, weirdly, the film pays homage to the family-friendly ones like Freaky Friday. Felix and Lily are forced to learn things about one another to have this baby and live somewhat of a happy life together. Felix is a total free spirit who is obsessed with eating mushrooms and doesn’t want any sort of responsibility. Lily is very matter-of-fact and takes everything she does in life seriously, which is why she is always stressed out.

There are plenty of scenes in Swap Me, Baby where the sexual nature of the jokes can feel a bit too much. Some of the jokes are a bit too low-brow or infantile for their own good and ultimately take away from the film’s natural charm. The good news, however, is even though the humor can be very hit or miss, Leemans and Hentschel are undoubtedly charming together. They are an odd pairing, but like most successful odd couple comedies, most of this movie works thanks to the chemistry between the two leads. Leemans and Hentschel play off one another with ease, and you can’t help but want to root for them to be together. The differences in their personalities may seem a bit extreme, but I think the personality types will feel very familiar, even if they are a bit exaggerated.

Swap Me, Baby is a fun little indie comedy. This film is worth checking out if you are a fan of stoner comedies or romantic comedies that tend to be more on the raunchy side. It should also be noted that Leemans and Hentschel are two actors worth keeping an eye on. The two of them show a lot of potential as comedic actors.

Swap Me, Baby is now available to rent or own on various streaming platforms 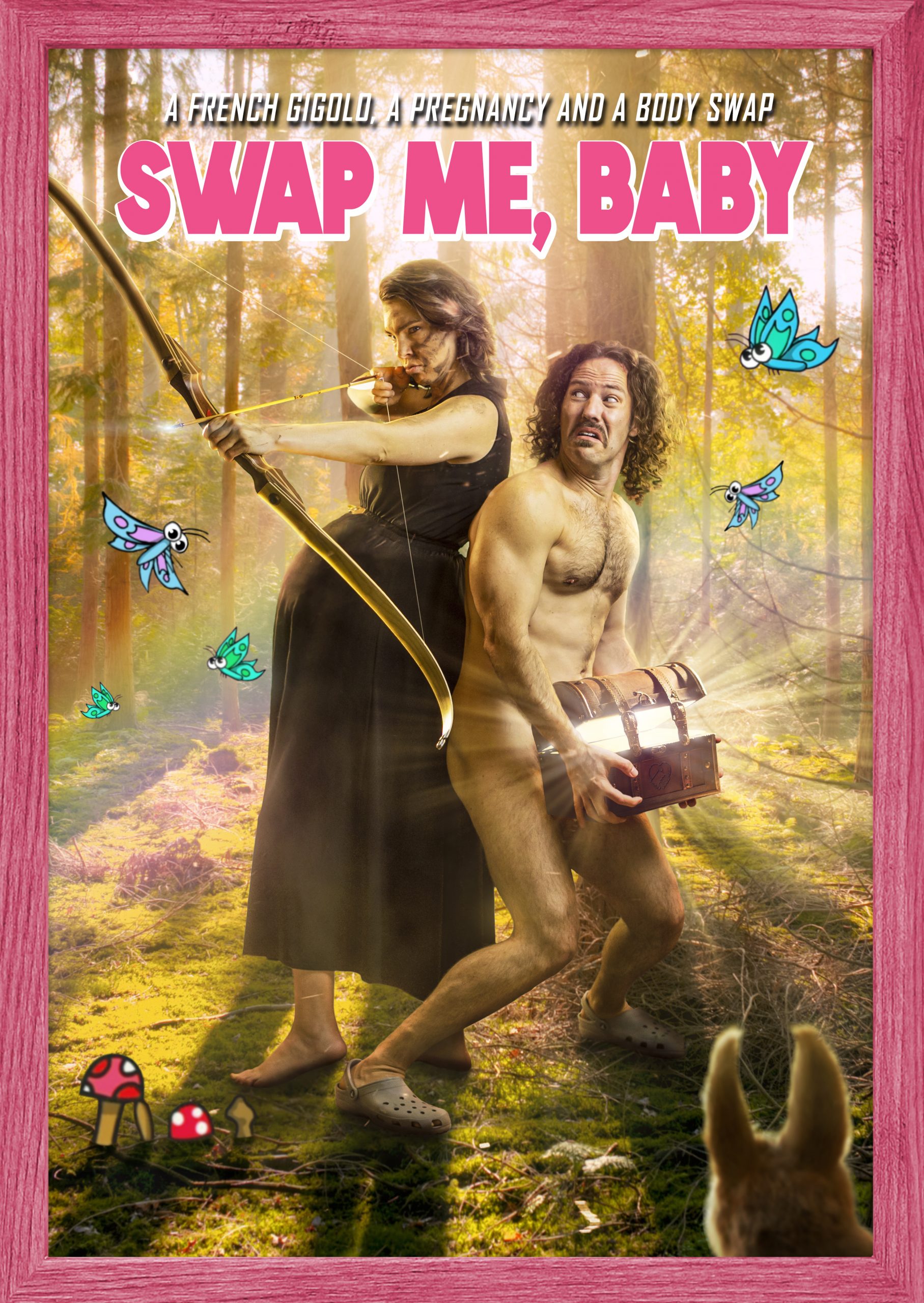 Lily, an uptight business woman and Philippe, a larger than life French mushroom tripping gigolo are 8 months pregnant. Their therapist recommends a nature getaway at a remote cabin. Their little weekend trip turns into a hilarious adventure when Philippe stumbles upon a magic box that swaps out their souls. Lily and Philippe are tasked with riddle after riddle not only to get their own bodies back but to also get a better understanding of their opposite and what they have to offer as parents.
0
Average User Rating
0 votes
Please sign in to rate.
Film:Swap Me Baby
Cast:Ava Bogle, Charlie Thiel, Falk Hentschel, Kimberly Leemans
Director(s):Caden Butera
Writer(s):Jesse Luman
Genre:Comedy
Studio(s):S&R Films